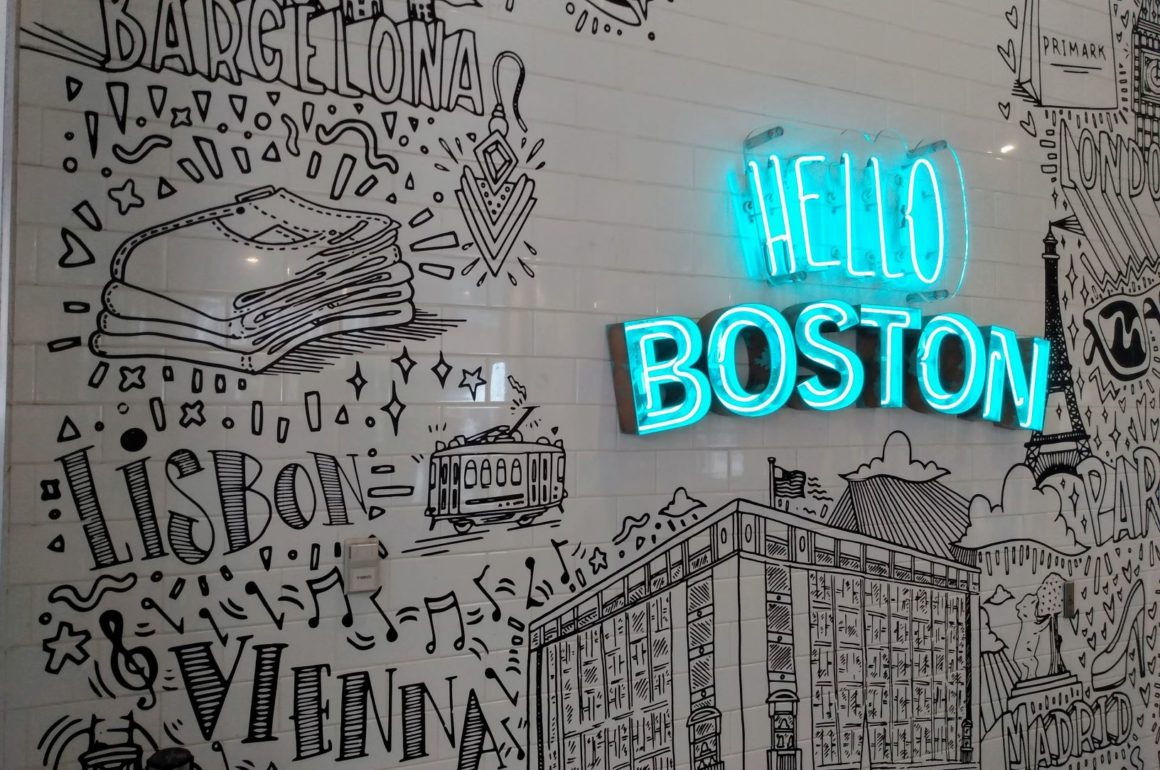 Hello Boston! It had been nearly 20 years since our last visit to Boston and it was well-past time to return. As the US continues to open up after 18+ months of Covid restrictions, and with both of us fully vaccinated, we hit the road north.

To reintroduce ourselves to the City of Boston we decided to take a tour on the Hop On/Off Old Town Trolley. Here’s our tip about taking any hop/on bus, in any city. Stay on the bus and ride the entire route at least once. It’s a great way to get a feel for the city especially, if it’s your first visit. Once you’ve ridden the entire route start hopping on and off as you explore. Boston is such a walkable city we didn’t get back on the trolley until the end of our day. We decided we’d ride the entire route again just for fun, but hopped off because traffic was so heavy at 5:00.

Just start walking. It’s one of the best travel tips we can offer. When you let your feet take the lead it’s amazing what you’ll discover. Boston is very pedestrian friendly, but the city is not at all parking friendly. Don’t drive in Boston. That’s another best travel tip we can offer. The traffic is heavy, lots of one way streets, seemingly never-ending construction and the average parking rate is about $20 for 1 – 2 hours, if you can find a space in a public parking garage. You might drive in circles looking for a metered parking space. City center hotels most often charge for parking as well.

Not wanting to deal with driving and parking in Boston, we chose to stay just outside of the city in Waltham. We found a lovely Hilton Garden Inn with ample free parking. Each morning we drove 15 minutes to the T redline Alewife Station, where free parking was available. The 20-minute T ride dropped us at Boston Commons. It worked really well and made for a stress free round trip in to the city. The stations were clean and we never felt anything but safe. There are helpful information people at each stop as well.

Time to start walking. It doesn’t really matter where you pick up the Freedom Trail, but theoretically it begins in Boston Commons and ends at the Bunker Hill Monument. The trail is 2.5 miles in length and passes by 16 historical points of interest. Just follow the embedded bricks in the sidewalk. It’s very easy to get sidetracked while following the trail because there are so many places to explore. Ideally, allow yourself the better part of a day, or even better, two days if you really want the full experience of following the Freedom Trail.

Stops along the trail include Faneuil Hall, which is a fun place to shop and grab a bite to eat, the Old State House, the Old North Church, Paul Revere’s House, the Granary Burying Ground and the USS Constitution to name just a few. If you don’t have much time in Boston, following the Freedom Trail will give you a good overview of the city.

With all of that being said, here’s a look at what we consider to be some of the best Boston highlights. Keep in mind each day we arrived at the T station in Boston Common, which is across the street from the Park Street Church. From that starting point, we walked everywhere.

The Gardner Museum was probably our favorite place to visit in Boston. It is an incredible museum, not quite like anything we’ve seen before. Isabella Stewart Gardner spent her life collecting art and antiquities and personally curating her museum, which was also her home. Her story is fascinating and the museum should not be missed. To read more about the museum our post is linked here.

The Granary Burial Ground is located right next to the Park Street Church. Established in 1660 the cemetery is the final resting place of Paul Revere, Benjamin Franklin’s parents, Sam Adams and the first mayor of Boston, as well as victims of the Boston Massacre. Walking through the historical cemetery and looking at the headstones of persons buried over 300 years ago is a lesson in societal history. Back in the 1660’s the area of the cemetery was less than ideal as it flooded often. I’ll leave it to your imagination as to the effect the flooding had on the graves. Today, it’s actually a very peaceful tree-shaded final resting place.

Little Italy is all kinds of fun and it’s where most likely you’ll be distracted and wander away from the Freedom Trail. No worries though, it’s easy to pick up the trail. Everything Italian you could possibly want, you’ll find in Little Italy. It is a foodie’s delight. We indulged in delicious pasta, yummy cannoli and we found an authentic Italian deli where we bought freshly-baked bread, thinly sliced ham, fresh mozzarella cheese, olives and artichokes hearts. Take your appetite to Little Italy.

While in the North End, don’t forget to find the statue of Paul Revere and the Old North Church. Contrary to legend, Paul Revere was not actually the person who hung the lanterns in the steeple of the church on April 18, 1775 to warn of the British approaching. Visiting Boston is a lesson in American history.

The USS Constitution “Old Ironside” is docked at the Charlestown Navy Yard, just at the end of the Freedom Trail. Launched in 1797, the USS Constitution is the oldest commissioned ship in the US Navy. While the Navy crews the ship, the National Park Service operates the ship/museum. There is no charge to board/tour the ship, but visitors must pass through a security check.

It’s actually very interesting to tour the ship and talk with members of the crew. One thing we noticed right away, when we went down to a lower deck, is that short stature was best. If I remember correctly, a crew member told me most sailors were 5’6″ or shorter. And, believe it or not all members of the crew slept in hammocks. Imagine being on the open sea with the ship rocking and rolling and trying to sleep in a swinging hammock. Along with short stature, a strong stomach was also a must.

Not wanting to retrace our steps back across the bridge, we opted for the water taxi. Highly recommend this fun 10-minute boat ride across the water from Charlestown Naval Yard to Long Wharf. The price of a ticket is less than $4.00 one way.

Once you’re at Long Wharf we recommend you find your way to the Granary Tavern. It’s near the wharf between Milk and State Streets. It’s the ideal place to sit at an outside table and enjoy the best Bang Bang Cauliflower with a couple of cold drinks. Trust me on this. The day we walked to the Naval Yard it was scorching hot, so the water taxi return followed by a lovely respite at Granary Tavern was perfect.

The Best of Boston

Boston is a fantastic city, this has been just a small sampling of how we explored the city. We spent four full days making our way to as many sites as we could manage. Because we were there just before the State of Massachusetts ended all Covid-19 restrictions, many sites that we hoped to see were closed to public access. Even so, we still managed to fill our days with the best of Boston.

Founded in 1634 Boston Common encompasses 50 acres and is the oldest park in the US. After a fun-filled day of exploring, Boston Common is the perfect place to find a park bench, sit back, relax and embrace the moment.