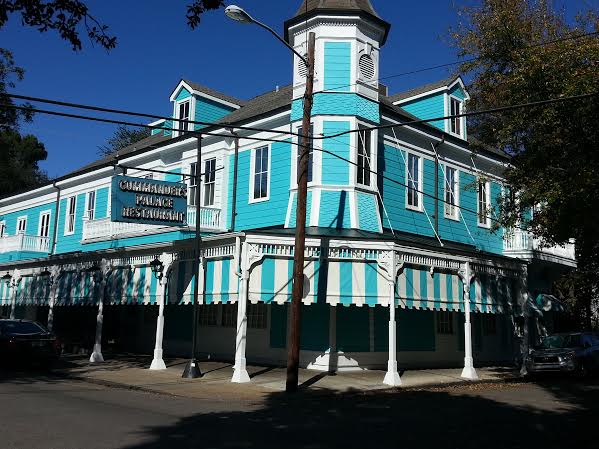 I wasn’t sure what to title this post:  Southern Hospitality is Alive and Well?  The 25-cent Martini? The 3-Martini Lunch?  Happy Birthday to Me?!  So, fueled by a 3-Martini lunch I thought I’d just start writing and see where it takes me.

Hospitality, It’s What We Do

If you’ve been following us for a while you know we own/operate a B&B in southern Oregon.  If you’ve been following for a bit longer, you know we moved from California to Oregon nearly three years ago and for 16 of those California years, we owned/operated a French restaurant.  For those of you who have known us for a really long time, you know that in another lifetime Abi managed a French restaurant while I worked for Hyatt Hotels.  As I’ve said before, hospitality is what we do.  Oh, that’s another title possibility:  Hospitality, It’s What We Do.

You can probably imagine we have pretty high standards when it comes to quality of service.  Last night we made a quick stop at a CVS (pharmacy) store and the girl working the cash register stopped in the middle of a transaction to take a big honking bite out of a candy bar and then proceeded to chew it while I paid for my purchase.  And, guess what, her supervisor was right there.  But I digress.

Happy Birthday to Me

Today is my birthday.  Yes, indeed I am 21,170 days young, or 706 months, or 58 years.  I’m not sure which sounds better or worse.  But my son, ever the diplomat, told me I was 58 years young.  I love him.  Last year, we celebrated my birthday in Paris, talk about awesome.  I decided I wanted to do something extraordinary so I told Abi, let’s climb to the top of Norte Dame Cathedral. 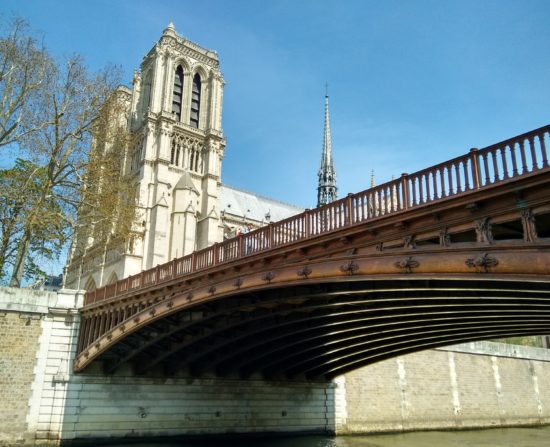 Okay, give me credit for the idea because if you know me at all you know how ridiculous this was for me to even think of such an idea. I have a wicked fear of heights.  And sure as shit I climbed the spiral staircase, stepped out on the catwalk between the two spires and froze.  I couldn’t move to save my life, but a lovely angel appeared out of nowhere and guided me to the down stairway, leaving Abi to enjoy the spectacular views.

This year, here in New Orleans, I decided to take on something more suitable to my advancing years and where I could keep my feet firmly on the ground.  We decided to take the self-guided walking tour of the Garden District and if that sounds totally old-fogie, you’re probably right.  It was amazing and guess what, I saw actor John Goodman get out of his car and walk into his stunningly beautiful home.  Our eyes locked, and then it was over, that fast.  The Garden District is where the wealthiest of the wealthy called home (they still do); some of which were the town homes of Plantation owners. 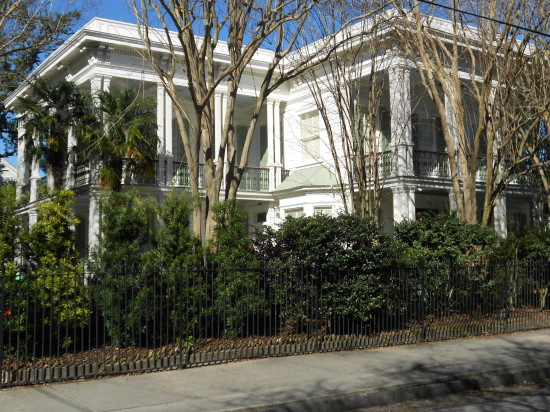 The home of John Goodman

Lunch at The Commander’s Palace

In the Garden District there is a restaurant called, The Commander’s Palace.  It is a New Orleans legend, a place to see and be seen, where people “dress” for lunch.  I’d read about the restaurant’s reputation so I didn’t really believe we’d get a table walking in at 1:45 in the afternoon with no reservations, but they seated us within minutes.  Keep in mind, this is the ultimate in service, old-school fine dining establishment. We were seated in the indoor garden room, which was not as nice (classy) as the main dining room, but still quite nice and the service was very good.  Oh, did I mention The Commander’s Palace is known for its 25-cent Martini?  Yep.

We ordered lunch and just about the same time we noticed they were starting to set up for a banquet on the far side of the room.  This was okay, but the next thing we knew they were stacking chairs around us, loudly pulling up the drop leafs on the tables, clearing large spaces in the room, leaving just us poor schleps (there were 5 tables occupied) to fend for ourselves.  It quickly began to change from a lovely lunch to a, hurry up you’re in our way kind of experience.  Two women at another table even half-heartedly asked the staff if they were going to take their table from under them.

This my friends, is where Abi reached his breaking point.  He excused himself, found the closest server and asked to see the manager.  Wham, bam, thank you ma’am and the next thing I knew the host was tripping over himself with apologies.  He picked up our Martini’s and escorted us to the main dining room where we were seated and snap, our new server was right there to greet us.  Our entrees, which were very good by the way, we’re served and along with round three (that’s the house limit) of our 25-cent Martini’s we got down to the business of loving my celebratory lunch.

Text thing we knew our kind server brought us a piece of pecan pie and ice cream on the house.  Here’s the thing, I do not like Pecan Pie.  I’ve never ordered a piece of it in my life, but Abi enjoys it.  I gotta tell ya though, I will still never order a piece of Pecan Pie because nothing would ever compare to how good this pie was.  Apparently, they use Molasses. 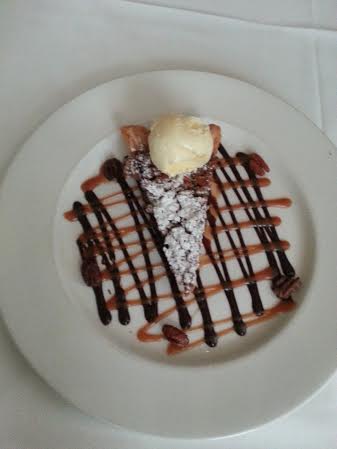 Pecan Pie – seriously, this little piece of art is the one and only piece of Pecan Pie I will ever eat

Anyway.  A few minutes later our server came back to our table to apologize again and to tell us our lunch was on the house.  And that my friends is not only southern hospitality, but how it should have been done. 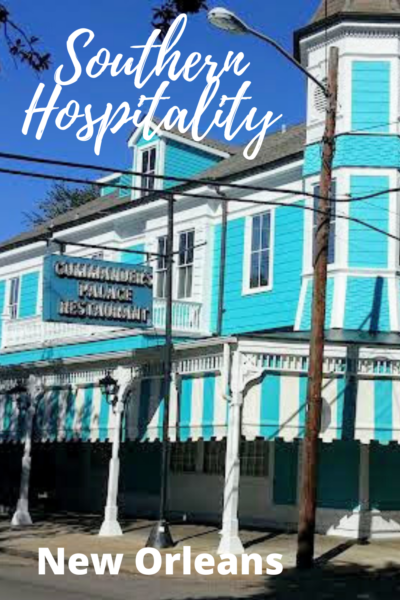 After lunch we were outside the restaurant just as the two women from the Garden room came out and they said to us, “You were smart, you moved, what was all that about?”  It was clear they were very unhappy, but they didn’t say anything to the staff.  Now, there’s a lot of people out there who will nitpick about the most mundane stuff, but there is a limit to what’s acceptable.  As we were leaving Abi again asked for the manager; but this time Abi shook his hand and thanked him for his hospitality because he made it right.  I don’t know where the break down was amongst their staff today, but it should have never happened and they knew it.

The Key to Good Hospitality – Anywhere

Here is the key to good hospitality.  Whether we had a reservation or we didn’t (we didn’t) or whether we were dressed to the nines or in jeans (we were in jeans) once you seat a customer, you treat them in the same manner in which you treat everyone else.  I would have totally understood if they turned us away. We didn’t have a reservation, it was well within their right to do so. I would have rather been turned away, then to have experienced what we did.

So, while I would never encourage anyone to nitpick over stupid little things, or something that is beyond the control of the staff, if something is offending you, or feels very wrong, then step up. But do so with class.  The key is to not raise your voice, or pound your chest to put on a show for everyone. Just simply and quietly ask to speak to the manager and see what can be done.  In this hurry hurry ding ding society of ours, good hospitality – whether it be dining, lodging or retail – is quickly becoming a lost art. It was good to see that southern hospitality is alive and well. 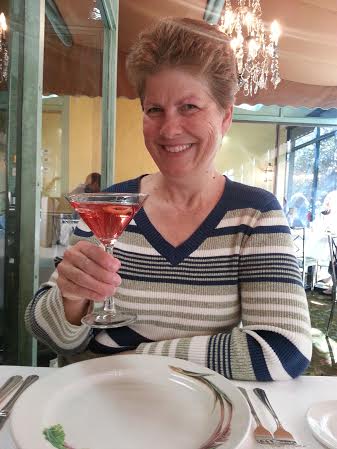 Happy Birthday to me!

So what do you think?  Did I choose the right title?!