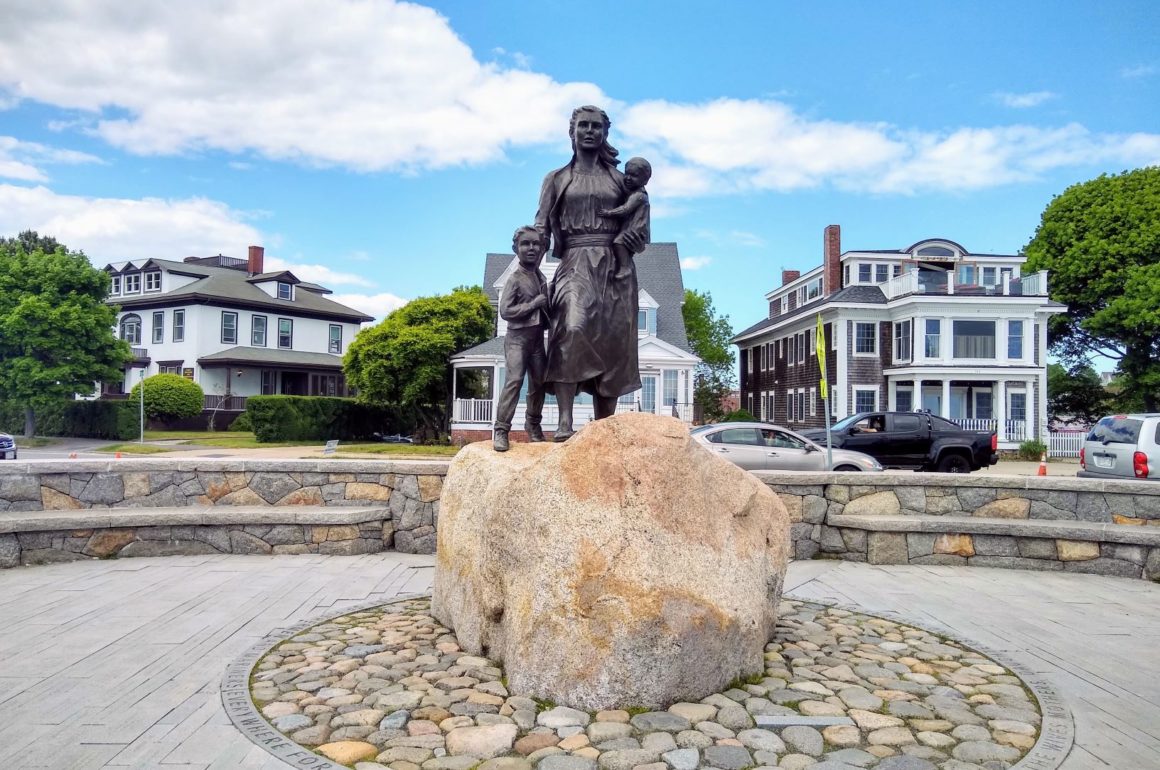 Salem, Massachusetts is all kinds of quirky witchy fun with the added bonus of majestic coastal beauty. It turned out to be a lovely and convenient base for exploring Cape Ann.

When people think of Salem, MA they most likely conjure up thoughts of the notorious witch trials that took place long ago in 1692. Two hundred people were suspected and accused of practicing witchcraft. Twenty people were actually executed. Seemingly, if they were actually witches could they not have done something about the trials? I wonder if the point was argued. Suffice it to say the settlers came to Salem with their own ideas of religious superstitions, and the witch trials were a tragic consequence.

Salem was settled in 1626. That’s just shy of 400 years ago. If I had to choose only two words to describe the City of Salem, I’d go with charmingly quirky. What happened to the innocents hundreds of years ago is definitely embedded in the history of the city. Today, aside from historic houses, there isn’t much of the physical history left other than plaques, cemeteries and guided tours that tell the story of what once was. After all, 400 years is a long time.

Today’s Salem offers a plethora of food and entertainment options. Eateries such as wood fired pizza, authentic hole-in-the-wall taco joints, and of course waterfront seafood dining ensure no visitor will go hungry. Foodies will love Salem. For those looking for a little witch craft and mystery, there are shops, tours and museums to satisfy the curiosity. If Halloween is your favorite holiday, Salem is the place to be. A word of advice… book accommodations early, because it is a popular month-long celebration.

The perfect overview, to the City of Salem, is to walk along the self-guided Heritage Trail. It’s easy to follow, just walk on the sidewalks with a red line painted down the middle. The trail will take you to historical points throughout the historic core of the city, which is fairly small, but big on fun. And, as I mentioned, it’s the perfect base for exploring Cape Ann.

Although it doesn’t feel as if it is, Cape Ann is actually an island just about 30 miles northeast of Boston, but it feels as if it’s worlds away. A few well-chosen words to describe Cape Ann would include the color green, boats, peaceful coves and beautiful picture perfect seascapes around every bend. It was our first exploration of Cape Ann and we made the most of our time by visiting each of the small idyllic towns, as well as two very special historic homes.

A Castle in Gloucester

When exploring it can often be the lesser known gems that turn out to be the best finds. It was while researching Cape Ann that we came across the Hammond Castle Museum in Gloucester. We knew nothing of John Hays Hammond, Jr., or his castle, but the experience did not disappoint. Neither did visiting Gloucester.

It could be said that John Hammond, Jr. was a man before his time. He was an inventor with a circle of friends that included Alexander Graham Bell and Thomas Edison. Over the lifetime of his work he secured more than 400 patents and he was a pioneer in the field of radio control. Hammond sat on the board of RCA for 25 years and many of his patents were sold to RCA, which along with his inheritance, made him a very wealthy man. He was also a collector of art and antiquities.

In 1926 he began construction of his dream home on a cliff overlooking the Atlantic Ocean just outside of Gloucester. But, it was no ordinary residence. It was in fact, a castle. A castle that was also home to his laboratory, offices and from where he ran his business. There is also a war room because Hammond worked with weaponry for the Navy.

Mr. and Mrs. Hammond lived in the castle for the rest of their lives. He passed away in 1965, she in 1959. Because they had no heirs, the castle eventually became a museum and event venue. The castle was featured on A&E’s American Castles. Interestingly, it was stipulated in Hammond’s will that their private quarters, and the materials of their personal lives, not be open to the public.

Guided tours are offered and we very much enjoyed the tour format. Our guide shared the history of the Hammonds and some of the stories behind the scenes so-to-speak. She gave us a good overview and then we were allowed to roam freely throughout the castle (sans the private quarters), which was great fun.

We know very little about architecture, but if we have the chance to visit a beautiful home, or castle, or cathedral, we’ll go for it every time. If there’s an interesting story behind it, and/or it’s a National Historic Landmark, all the better. So, when we came across the Historic New England website highlighting multiple historic homes, we were delighted to discover the Sleeper-McCann House was in Gloucester.

The Sleeper-McCann house, known as Beauport, which is perched on the shoreline has spectacular views of Gloucester Harbor. If you know just where to look, you can see the tower of the Hammond Castle Museum across the harbor. And, it turns out John Hammond and Henry Davis Sleeper were very good friends. Take it a step further and Henry was also very good friends with Isabella Stewart Gardner. It was fascinating to learn about this extraordinary circle of friends with incredible homes and art collections.

Like John Hammond, Henry Sleeper was a man before his time. His passion for design eventually led him to become one of the country’s renowned interior designers. Each of the 40 rooms was specifically constructed and styled by Sleeper, right down to where the candles should sit. Originally conceived as a summer house for Sleeper and his mother, the house later became a showroom for perspective clients. It was also a welcome retreat for friends and a cast of personalities including his long time housekeeper who kept detailed notes of where every single piece of art, antiquities and special touches belonged, as well as his neighbors and long-time associates. The house has been published in numerous magazines.

When Henry Davis Sleeper passed away (1934) he left no heirs. The house was purchased by Mrs. Helena Woolworth McCann, who with the exception of one room, left Beauport intact to preserve the priceless collection. When the McCann’s passed away in 1947, their heirs left the house to the Historic New England organization which operates the house as a museum.

Our tour guide provided us with a detailed overview of Sleeper’s life, his career and his passion for design. She then guided us through 26 rooms and explained the significance of each room. We were in awe throughout the hour long tour and felt as if we experienced a real sense of who Sleeper was and the importance of his remarkable house. We’d love to return one day to take the “Nooks & Crannies” tour!

A visit to Salem and Cape Ann makes for an excellent road trip adventure. When in Gloucester be sure to take a walk along the fisherman’s memorial promenade. Don’t forget to look for that perfect bench on top of a boulder where you can look out over the harbor.

Rockport is charming. It’s the picture postcard seaside village with its shops and eateries and amazing views. Park your car and just let your feet lead the way.

We thoroughly enjoyed our exploration of Cape Ann and hope to return sooner than later. There is so much to experience and all of the towns that dot the island have a true sense of community with strong ties to the sea.