A Visit to Boston’s Gardner Museum 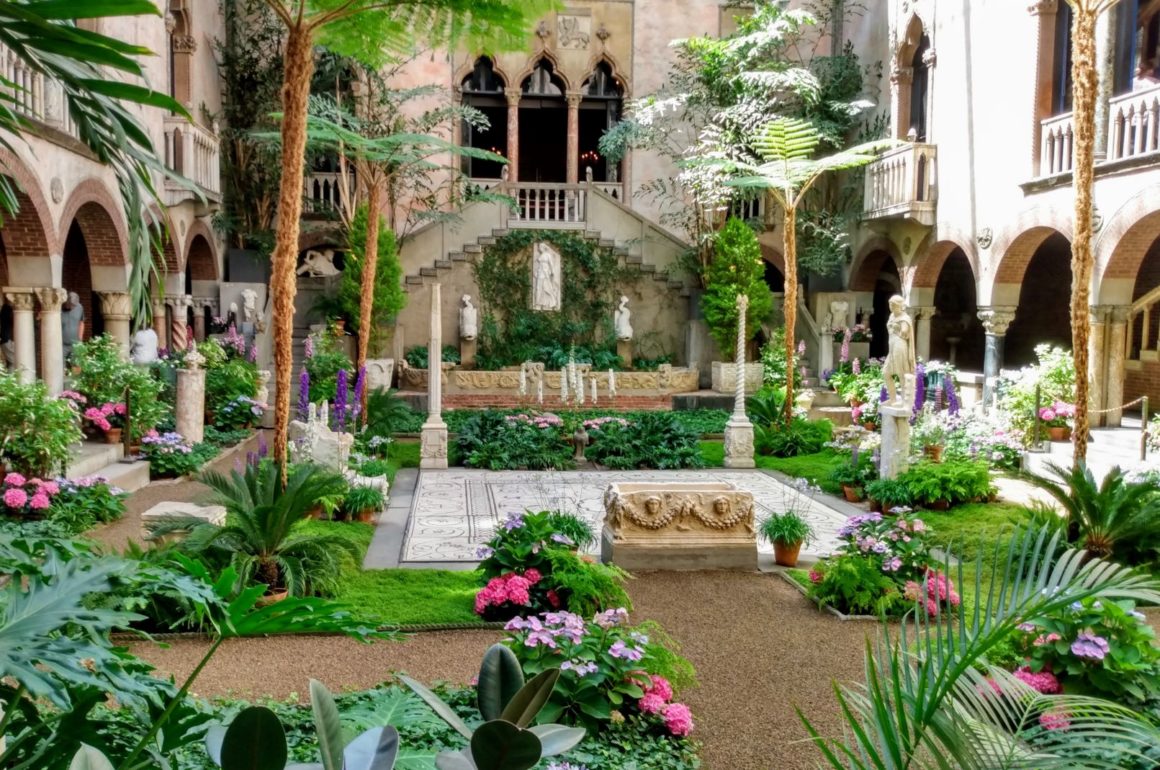 We were told, one must visit the Isabella Stewart Gardner Museum, when in Boston. Turns out, it was sage advice because the museum is extraordinary.

Isabella was born in1840, to a wealthy family. She was well-educated and attended finishing school in Paris. In 1860 she married Jack Gardner, the brother of her Paris finishing school roommate. The young couple settled in Boston, Jack’s hometown. Three years later Isabella gave birth to a son, who unfortunately passed away at just two-years-old. In an attempt to free her from grief, and with her doctor’s advice, Jack and Isabella began to travel the world and the rest, as they say, is history.

Inspired by the culture and art of northern European countries, as well as Russia and the Middle East, Isabella and Jack began a lifelong commitment to their passion of collecting art and antiquities.

Sadly, Jack died in 1898. Isabella moved forward with her and Jack’s dream of building a museum to house their collection. She purchased the land on which the museum stands today and built a palatial home museum, which opened to the public in 1903. Isabella lived in a private apartment, on the fourth floor, and she spent the rest of her life curating her museum.

We have visited a lot of museums in our travels, but the Isabella Stewart Gardner Museum is unlike anything we’ve ever had the pleasure of visiting. The footprint of the building surrounds an interior garden courtyard. As such, the garden is actually inside the museum and it is stunning. Pure perfection in every direction; it is a feast for the eyes.

Each room has a collection of art and antiquities. However, there are no “art tags”. Isabella wanted the public to interpret the art on their own. We loved the concept, it made us work a little harder at understanding what we saw.

A theft occurred at the museum in 1990. Thirteen pieces were stolen in 81 minutes and it seems unfathomable that the stolen art has never been found. How can that be? The theft is still under investigation, and a $10 million dollar reward is currently offered for information leading to the recovery of the pieces. The frames hang empty in the rooms where a theft occurred. To read more about the theft and the stolen pieces, click here.

If one chooses, there are audio guides available. Just bring your smart phone, a set of ear buds and download the app. As we toured the museum we found it worked well for us to enter each room, take in our first impressions and then listen to the audio guide. The stories about Isabella’s choices, and why she laid out the room as she did, completed the experience of each room for us. It’s a very engaging way to tour the museum.

Isabella set up an endowment to help maintain the museum. Before her death she stipulated that nothing be moved, sold or acquired after her passing. It was after all, her life’s work.