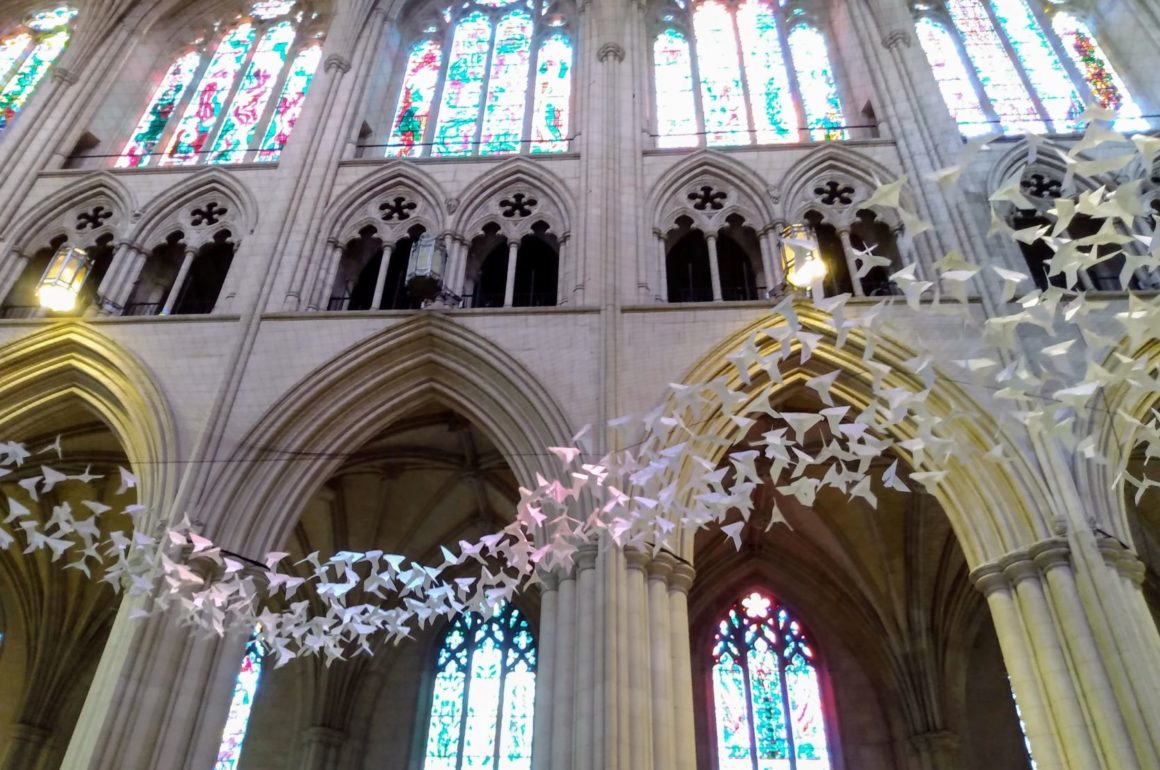 Les Colombes. White Doves. How can something so simple be so profound and carry such a serene message of peace?

Whenever we play Washington, DC tour guides we always include a stop at the National Cathedral. But not for the reasons you might think. It’s not a faith-based stop on our tours, but rather it’s a historical and architectural-based stop.

As far back as the late 1700’s, plans were discussed between George Washington and Major L’Enfant (who designed the city grid of DC) that a great church should be built to sit above the burgeoning City of Washington, DC. The capitol city of a new nation. On September 29, 1907 construction of the National Cathedral began. Eighty-three years later, in 1990, the final section (the west towers) was completed marking the end of construction. Although, the cathedral had been in use for decades before the completion.

The cathedral is the sixth largest cathedral in the world. We’ve had the privilege of visiting numerous chapels, churches and cathedrals in our travels. I can honestly say that while the National Cathedral doesn’t have the European bling factor, it definitely holds its own against the European cathedrals. The stained glass alone is worth a visit.

Earthquakes are a rare event on the east coast of the US. In 2011 a quake struck the Washington, DC region and caused $32 million (approximately) in damage to the cathedral. Ten years later, scaffolding is still present on the exterior as repair work continues.

More than anything what I appreciate about the philosophy of the cathedral is the inclusivity of all. Although the cathedral is based in the Episcopal faith, everyone is welcome and in our opinion, that’s how it should be. When we visit the cathedral we do so in appreciation of the historical significance to the US, the extraordinary architecture and the open doors to all who wish to step inside for whatever the reason.

As it is the cathedral for all people, it isn’t difficult to imagine the number of cultural and social events that take place within the walls of the cathedral. Les Colombes, White Doves, has been on exhibit in the national cathedral since the end of 2020. It is one stop on a world-wide tour (begun in 2015) and has been on exhibit in New York, San Francisco, Jerusalem and beyond.

There are 2,000 paper origami white doves that gently spread a message of hope, peace and kindness. They quietly and subtly move with grace in the open space of the cathedral’s nave. They are extraordinary in their simplicity. As the light from the stain glass moves across the open space, the doves carry the blended colors. It is magical.

Carry it With You

I think it’s safe to say the artist and the national cathedral community hope to inspire visitors to take the message of the white doves and pay it forward. Carry it with you; the message of a gentler, kinder world. As we stood in awe watching the doves from every angle, we embraced the moment to just be still.