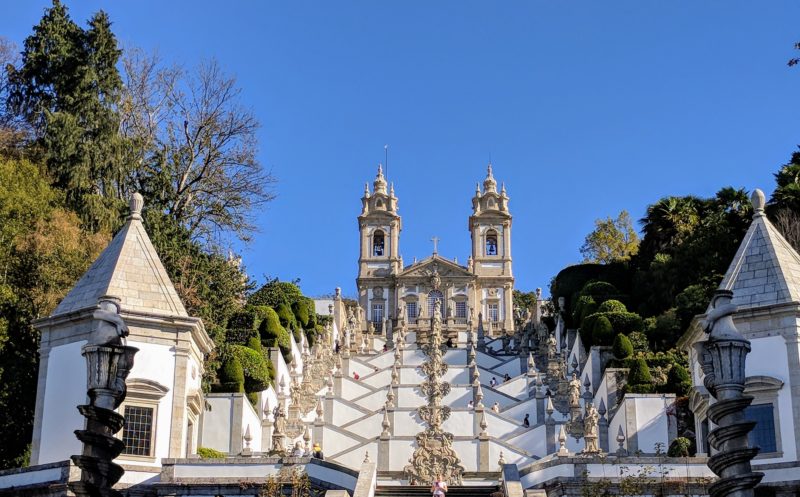 Although we are madly in love with the city of Porto, had we known about the historic and charming city of Braga, we may have instead planted ourselves there. 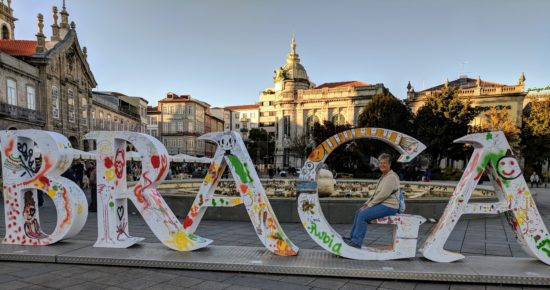 Just about an hour or so north of Porto, the City of Braga made for the perfect day trip.  We had two must see stops in mind that were the reason for our visit, but the city surprised us with so much more.  Beautiful flower-lined pedestrian promenades, fountains, an historic city center and so many trees!  Oh, and it was relatively flat in comparison to the hills of Porto, which make for great exercise but are exhausting.

The first of our two must see stops was the Bom Jesus Church, which sits on a hilltop and offers panoramic views of Braga and the surrounding valleys.  The weather held for us. The sky was clear and blue, and the sun provided just enough warmth as we stood to take it all in. 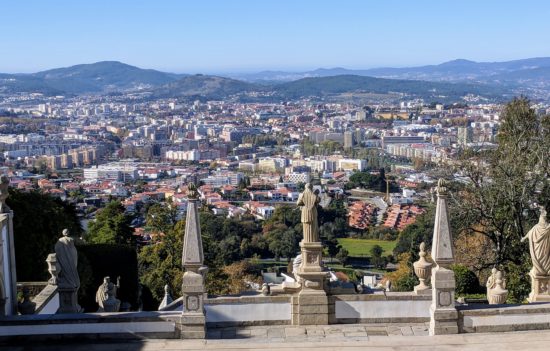 Overlooking the City of Braga from atop the hill at Bom Jesus Church.

It is the stairs of the Bom Jesus Church that beckon people to visit.  The church and the surrounding gardens are lovely and provide quite the respite for peace and quiet.  But, it is in fact the stairs which promenade down the hill that brings visitors from near and far.  Abi has a habit of counting stairs but we were so taken in by the experience he lost count.  Let’s just say the number of stairs is somewhere between one and a gazillion. See for yourself. 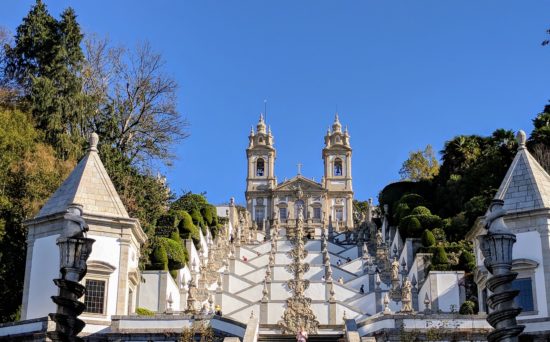 The stairs at Bom Jesus Church. Like nothing we’ve ever seen.

No, we did not walk up the stairs, but we did walk down each and every one as they switchbacked down the hillside.  If you look at the photo above, in the center line of the stairs, you can see there is a porch (landing) at each junction of the stairs crossing where there are fountains and statues depicting a story.  You can read more about the stairs here. 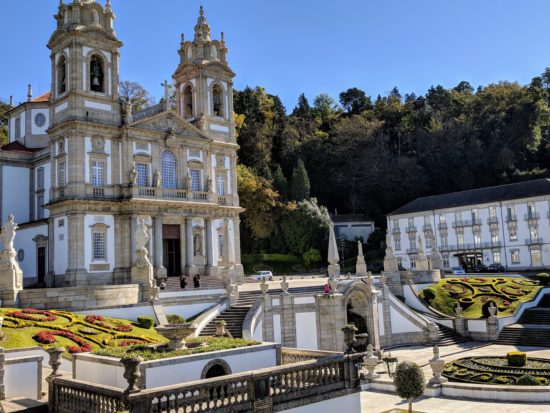 The Cathedral of Braga

The second of our two must see stops in Braga was the cathedral. Dating back to the 12th century, the Braga Cathedral is the oldest diocese in Portugal.  It is considered to be the crowning glory of Braga and it’s not difficult to see why, once one steps inside.

I often wonder why we never seem to tire of visiting chapels, churches and cathedrals, but each one we encounter seems to speak to us.  Come see me!  And, each and every time, without fail, I enter one of these majestic cathedrals my inner philosophical dialogue rages on. I think it’s part of why I (we) continue to be so fascinated, along with the architecture, the art, the music, the solace, and the historical aspect. 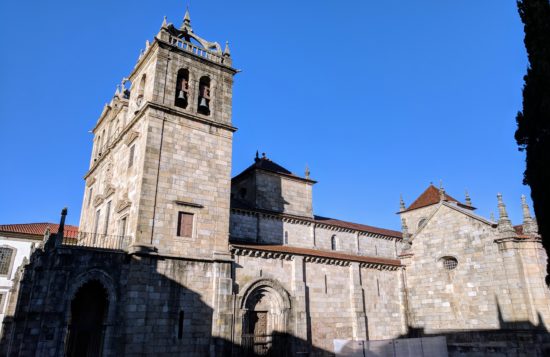 Not overly impressive from the outside, the Braga Cathedral, but once inside it’s a different story.

While spending time in Malaga my friend said to me, “I just can’t see another cathedral.”  I get it.  I so get it, but yet I keep going back for more and the cathedral in Braga did not disappoint.  Although, I think it can be said that it isn’t so much about the cathedral, but rather it is all about the pipe organs.  At least for me since I am obsessed with pipe organs – and pulpits.  You should see the number of photos of pipe organs and pulpits we’ve taken as we traversed Europe these past months.

Here’s the thing about travel, at least from our perspective.  There are wonders to behold in this world that we can’t even begin to imagine, and all too often we are seemingly clueless as to what lies ahead.  Let’s go see the cathedral is something we say without even putting much thought in to it.  It’s become part of our travel vocabulary.  But then we walk in to the next new place and we’re utterly taken aback because the unknown has surprised us yet again.  And, that’s exactly what happened in the Cathedral of Braga.

Trying to capture the grandeur and details of the twin organs was nearly impossible, so you’ll just have to trust me when I tell you they were magnificent. 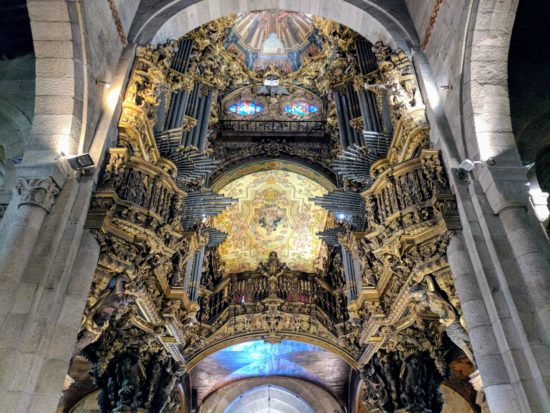 The pipe organs in the Cathedral of Braga

My sense of spatial balance is completely wonky, which is why (I believe) I have a wicked fear of heights and why I get dizzy in places that seemingly overwhelm my sense of balance, so… I had to pass on taking a tour of the upper choir chamber, but Abi went.  He was fortunate in that he was the only person on the brief tour and he was able to get up close to the keyboards of the organs.  Color me jealous.  He learned too that although the pipes look to be twins, one side actually has more pipes than the other. 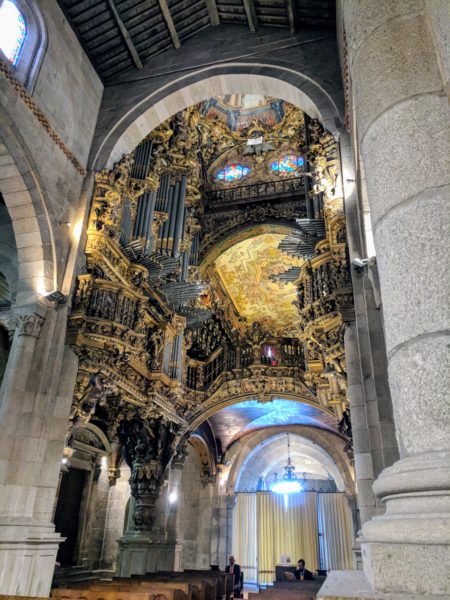 The location of the upper choir loft (just above the bottom arch) can be seen in this photo.  I’ve always said those who play pipe organs have zero fear of heights.  I envy them.

In the end, our two must see stops proved to be so much more than what we were expecting, as did the City of Braga itself.  A delicious lunch and a stroll along the pedestrian shopping promenades topped off our day.  So, hey, Braga, well-done.  You surprised us! 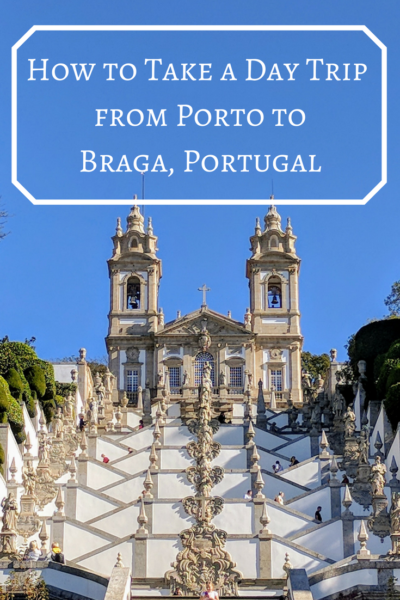