You know the scene in the classic story The Wizard of Oz when the wicked witch of the west cries out, “I’m melting, I’m melting?”  I couldn’t help but think of that melting green-skinned witch as a couple of hundred people sat in overwhelmingly hot train cars, at a random train station, in rural Croatia.

The alarm buzzed at 4:00 a.m., just three short hours after we switched off the light in an attempt to glean a few hours of sleep before starting our travel day.  After spending five days in Budapest it was time to go.  It was time to pack our bags and say good-bye to the beautiful city on the Danube.  I will forevermore think of Budapest as not only beautiful but extraordinarily hot. 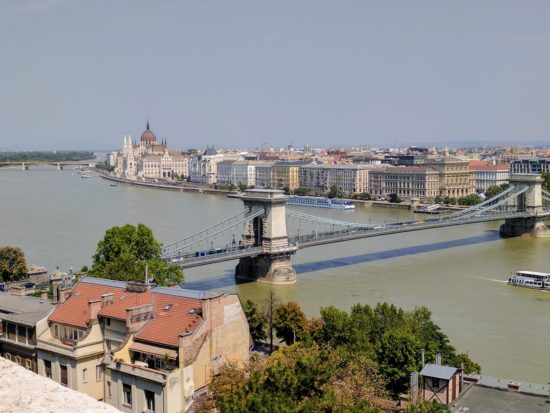 Budapest on the Danube River.

Having taken a practice run the day before to ensure our planned route was manageable, our stealthy early morning exit from our accommodations found us at the tram station before dawn, 4:30 a.m. actually.  Our efforts paid off as we successfully rode the 4:40 a.m. tram to the metro station.  Metro and railroad stations are tough on the traveler  when there are no escalators or elevators, so we planned our route accordingly.  Especially because the metro stations in Budapest are steeply deep and trying to manage stairs just wouldn’t work with our stuff.

Not At All Funny

Right on time we arrived at the international train station, Keleti.  As we rode up on the escalator toward the train platforms a large group of seemingly intoxicated 20-something young men were in front of us.  We noticed one of them was clowning around as if he was going to push the emergency stop button.  Surely, he would not be that stupid.  He was.  He did.

The group laughed hysterically as they stepped off of the escalator while at least 50 people with luggage were stranded as the moving stairs came to a stop. Completely frustrated Abi yelled out to them, “What the F* is the matter with you?” Fortunately, we were only about eights steps from the top and managed to haul our load up, but my heart went out to those who had more than 50 steps to climb. 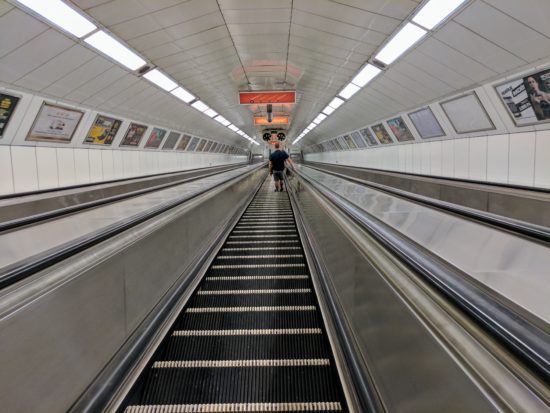 Our train pulled out of Keleti right on the 6:00 a.m. dot.  Okay, we thought, a less than stellar start but Croatia here we come.  We hadn’t given it any thought but as our train rolled to a stop a couple of hours later, the immigration agents boarded and asked for our passports.  It was then we remembered Croatia is not part of the Schengen, hence the border passport check.

Knowing in your head that they can’t possibly find anything on either of us as they scanned our passports, it was nonetheless worrisome when after the agent returned our passports and left the compartment, she came back and asked for Abi’s passport and left with it.  Um?  We could hear her talking to another officer but after a couple of minutes she returned the passport without a word.  I think that will bug me for years to come.  What made her retake Abi’s passport? 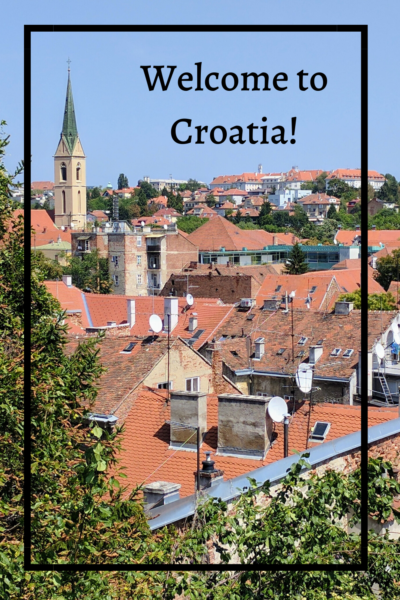 In the meantime, the train had been shut down.  No power, no air-conditioning, nothing.  Once the border agents – first the Hungarian agents and then the Croatian agents – finished their patrols, the train conductor asked for our tickets/passes.  As he stamped our passes, he notified us that at an upcoming station we would have to get off of the train, get on a bus, and then get back on a train.  The Croatian man sitting in our compartment offered up an explanation but of course we had no idea what he was talking about. 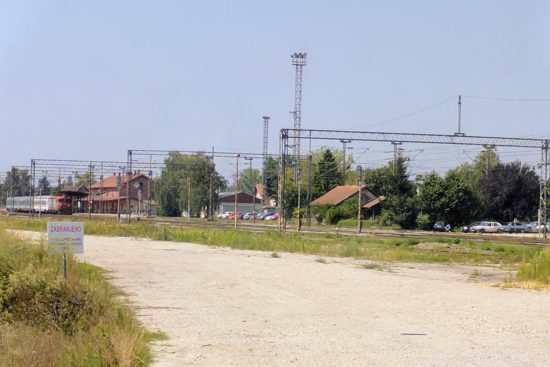 Sure enough, about 30 minutes later we got the word.  Next station, get off of the train.  In the middle of who knows where at a dinky train station, probably 150 – 200 people got off of the train with all of their bags, put said bags on a bus and off we went.  No sooner had we pulled away from the train station, our bus driver took a phone call while driving.  “Have you no rules about driving while talking on the phone?” I wanted to ask.

As the wheels on the bus went round and round we saw a road sign indicating we were 53 kms from Zagreb.  Ya gotta think, why don’t they just drive the bus the rest of the way? 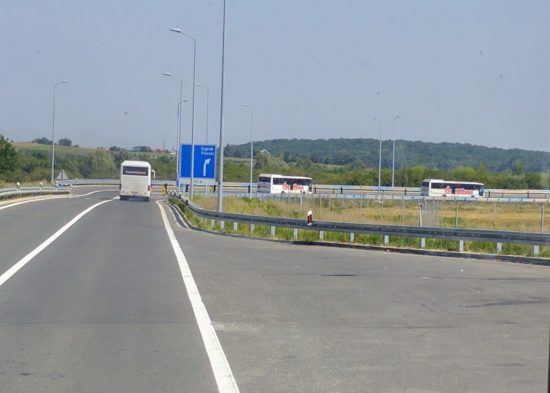 A caravan of buses full of train passengers.

But no.  Maybe 15 minutes later we pulled in to another random dinky rural train station in the middle of nowhere Croatia, got our bags off of the bus and onto a graffiti-covered city train which had been sitting and baking in the sun.  As every person climbed on board a wave of heat enveloped them.  It was an oven. 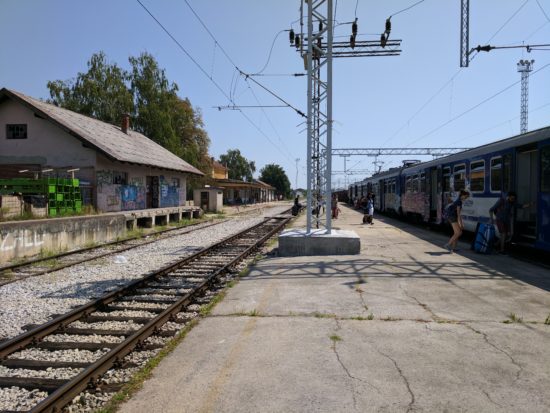 Another 30 minutes or so riding in the oven with barely a wisp of breeze blowing through the small open windows and the outside temp nearing 100 degrees, we finally pulled in to Zagreb, the capital city of Croatia; not a minute too soon.  And, damn, wouldn’t you know it?  Stairs.  No elevator, no escalator.

It was not the most auspicious arrival but we’re glad to be here just the same and we’re looking forward to exploring the city of Zagreb.  Now, if only someone would turn down the thermostat! 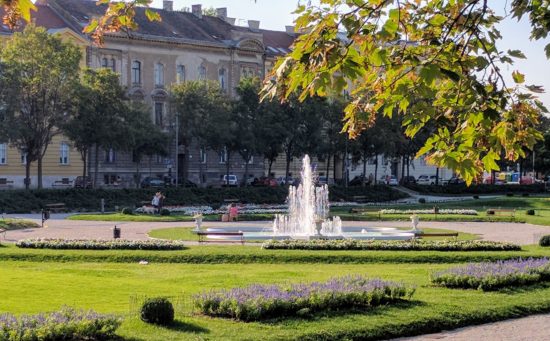 Our first glimpse of Zagreb.