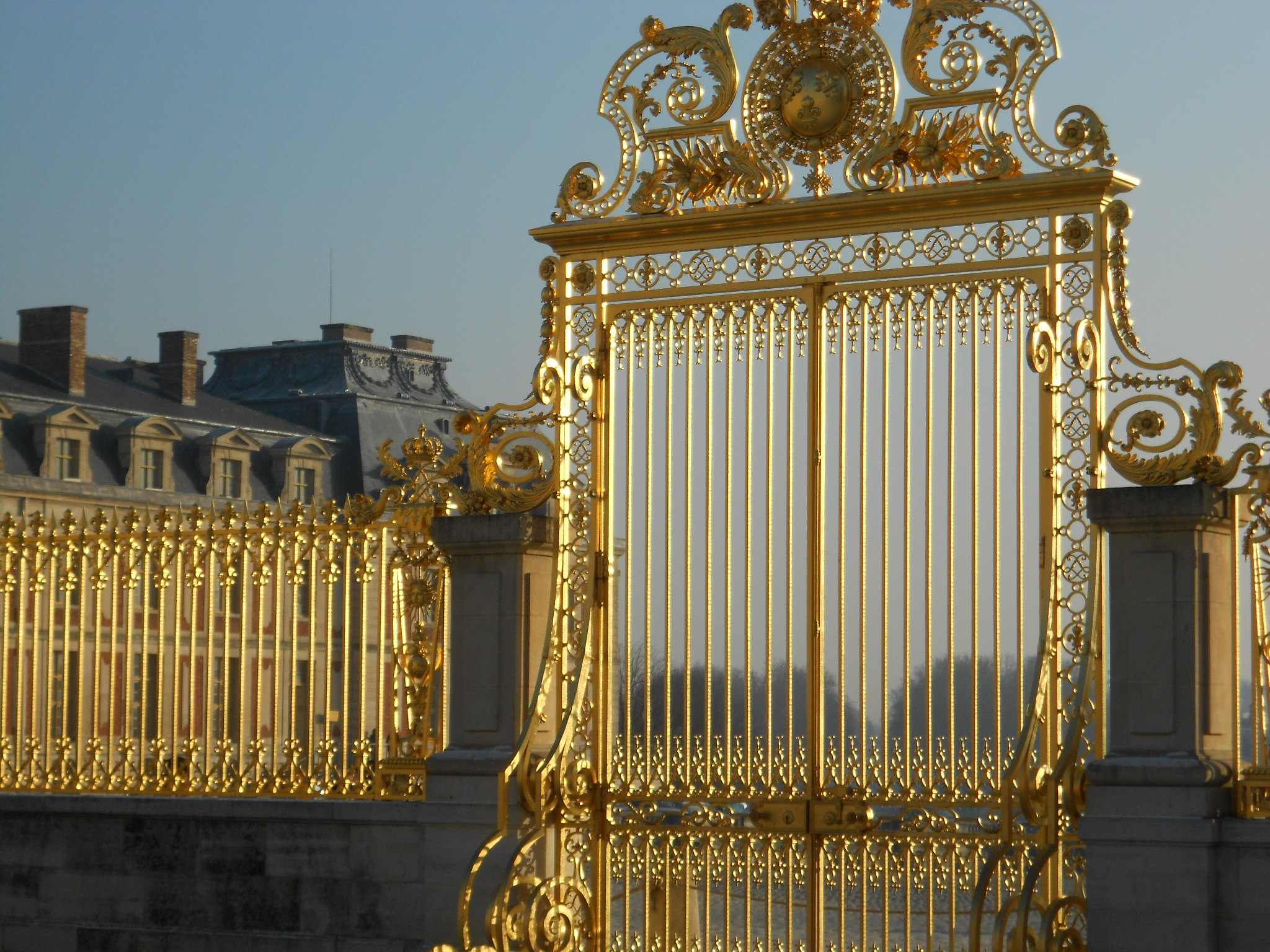 How do you describe that which is beyond description?  That’s what I’ve been trying to figure out for the past 10 days.  We visited the Palace of Versailles on January 17 (2013) and I’m still trying to wrap my head around what we saw.  The Palace of Versailles is the epitome of opulence and a lesson in what can go wrong at the same time, while it has stood for centuries as a showcase of French history, art and culture.

A Lesson in French History

The history of the palace is long and complicated to say the least.  I have tried reading and sorting through some of it and it makes my head hurt.  It left me with a yearning to take a class (or two, or three) in French history; being the history nerd that I am.

There was some crazy shit going on back in the day of King Louis XIV and his descendants.  Marriages were made to secure blood lines and bind countries together, the reigning queen gave birth in public to ensure the birth was in fact royal lineage and mistresses were the norm of the day.  One wrong step and the swift blade of the guillotine would have a king’s (or queen’s) head.  Don’t like your mother?  Exile her to an island somewhere; all seemingly common practices of the day. 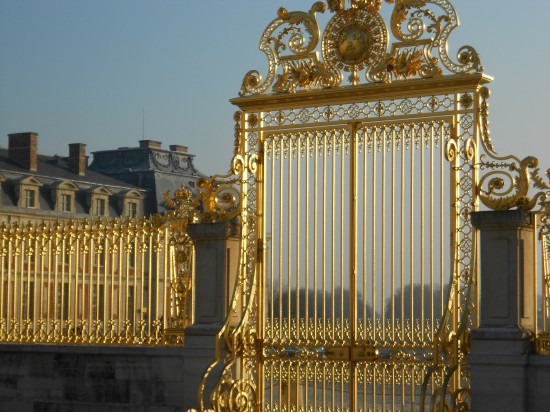 The Center of Political Power

At the height of its day, the palace had as many as 10,000 people in residence, working and visiting, as it served as the center of political power from 1682 when Louis XIV moved from the Louvre Palace in Paris. It remained so until the royal family was forced to leave in 1789 at the onset of the French Revolution, which is a whole other book of history.

The Last Queen of France

Although there were many queens who called the palace home, the queen who is the most associated with the palace is of course Marie Antoinette.  Her story is not a simple one and there seems to be two schools of thought when it comes to dear Marie.  One, that she was a self-indulged silly woman who gave no thought to anyone outside of her immediate circle.  Or two, that while she may have over indulged, as was the norm of the day, she in fact had very little say in her life and was for the most part set up to fail. 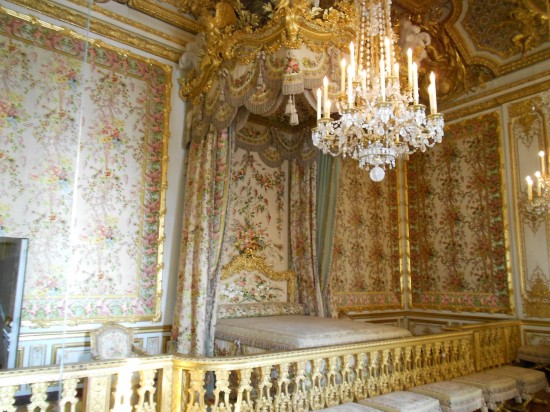 The queen’s bed chamber. The wall coverings were changed to reflect the seasons and it was the custom that no one moved beyond the railing unless asked by the queen.

Her story is pretty amazing.  Again, there are a few history classes that could be taken on the topic of Marie alone, but from what I’ve read about her, I tend to lean toward the school of thought that she didn’t have a hope in hell of surviving her marriage, her reign or her life.  And there is no actual documented evidence that she ever said, “Let them eat cake!”

A Day Trip from Paris

So, with my lack of understanding of French history but with a huge desire to see this magnificent place of history, we took the RER train from Paris to Versailles, about a 35-minute train ride, and then we walked 15 minutes to the palace. When you turn the corner and get your first glimpse of the palace, your first impressions are jaw dropping! The sheer enormity is beyond capturing in a photo.

We were lucky in that it was a crystal clear day and although it was cold, the sun fooled us into believing it wasn’t quite that cold; enough so that after we toured the main palace we walked the 30 minutes through the garden to the Grand Trianon and the Petite Trianon.  These properties were built, away from the palace, to provide the family respite (and Louis XIV could house his mistress) from the chaos of life under the scrutiny of so many.  Be careful what you wish for, right?

A Tour of Versailles

The tour is very well laid out and begins with an overview video and a collection of artwork.  You can move through the palace at your own pace and while it was crowded, it wasn’t overly so.  We felt very lucky to be there in low season because we couldn’t imagine the throngs of crowds that must move through like cattle during the high tourist season. 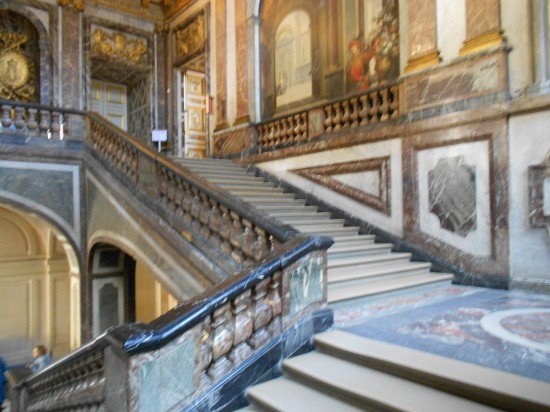 The queen’s stairway because really, she should not have to use just any stairway.

The tour includes the use of an audio device which we could actually understand. If we needed to, we’d wait until there was a lull in the crowd to see/listen to a particular room.  I think all together we were at the palace for about 5 – 6 hours, with a 30-minute sandwich break.  We toured everything that was available to tour and I left wanting more, so much more.

Not on the same day mind you, but it would have been great to go back for a 2nd day of touring rooms such as the nurseries or kitchens, or ….  the things they usually don’t include on tours but would be fun to see; behind the scenes so-to-speak.  When children were born to royalty, they were most often swept away and raised by governesses (chosen by those who decided they knew best) in a separate wing, and those wings would have been interesting to see.  Marie broke with tradition and chose someone close to her to be the governess to her children.  She also broke with the tradition of giving birth in public when at the birth of her first child (after 7 years of marriage) a doctor panicked when 200 people pushed in to the room and Marie nearly bled to death.

The Palace of Versailles

If built today, the Palace of Versailles would cost approximately $2,000,000,000.  It is so far beyond priceless it is unimaginable and while much of the furnishings were auctioned off or destroyed at the time of the French Revolution, many pieces have been returned and the palace is the ultimate museum of a lost era.

Today, the palace is still used for formal affairs for the French government and heads of state. Sadly, the opera house was not open on the day of our tour, but it underwent a major 2-year renovation (2007 – 2009) and today hosts many French and international productions.  Covering nearly 2,000 acres the gardens are beautiful even in the dead of winter.  It doesn’t take much to imagine how stunning they must be in the height of summer with everything in bloom.

And so without further ado, I give you a small glimpse into… The Palace of Versailles!

As a UNESCO World Heritage Site for 30 years, the Palace of Versailles is truly a magnificent place to visit and it’s one of those, “You have to see it to believe it!” experiences. 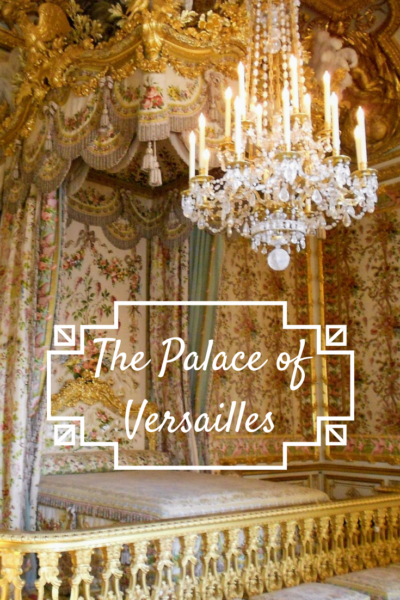