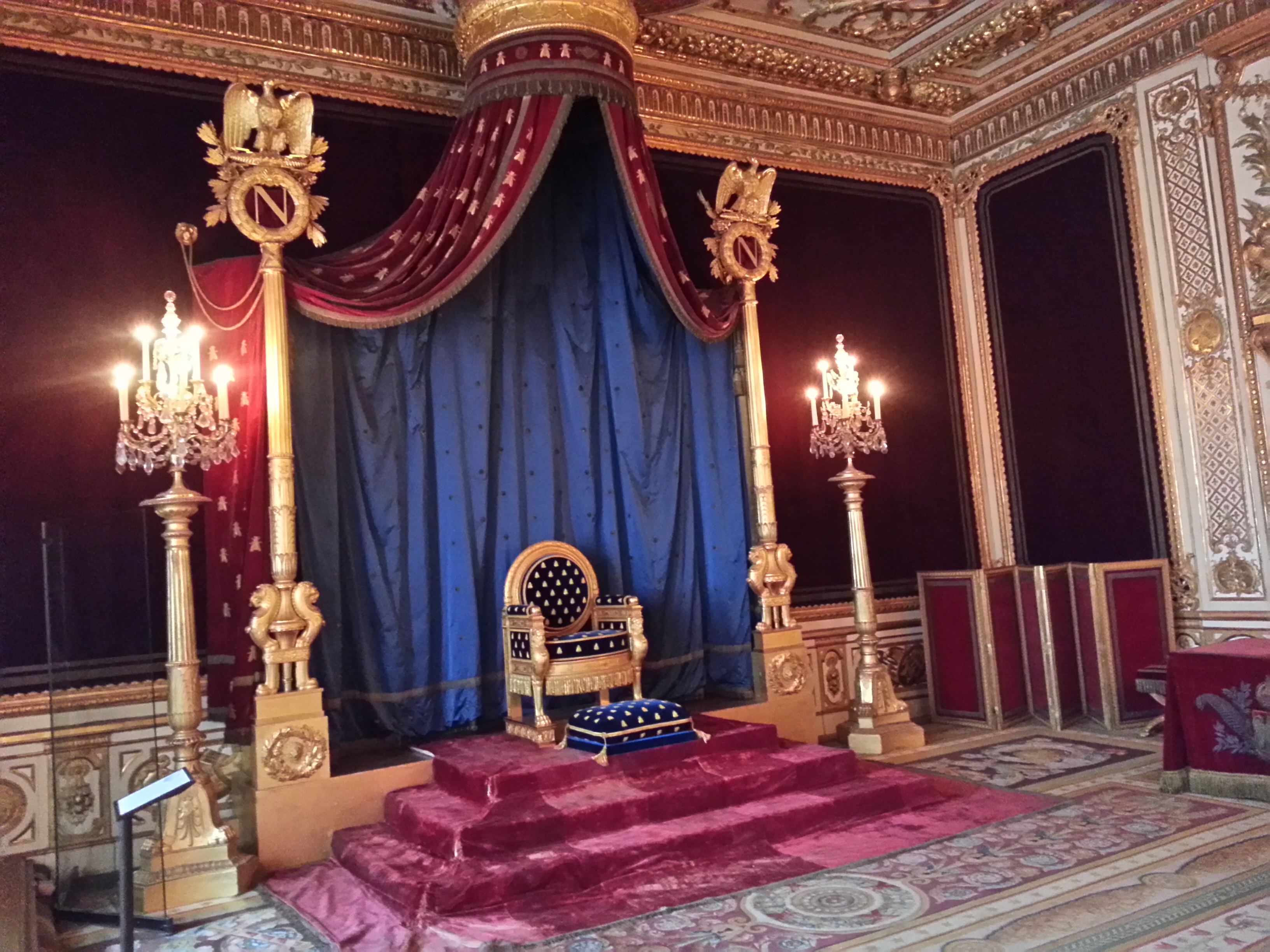 The forecast for January 25 was a brutal 26 degrees, by far the coldest day of our stay.  We gave thought to whether it was a good idea to stay in Paris for the day, roaming, or get on the RER and head out to Fontainebleau.

We chose Fontainebleau because we decided if we were inside, touring the château, it would be better than trying to explore Paris.  It was a wise decision.

When we arrived at the train station in Paris we found a very kind and helpful ticket representative (who says the French are rude?!) who encouraged us to buy a day pass instead of just round trip tickets and it proved to be a great suggestion.

Our first use of the day trip ticket was to take the RER train to the Village of Fontainebleau.  The train ride, about 40 miles, chugs along through a forested region and I could only imagine how beautiful the views must be in the spring and summer. 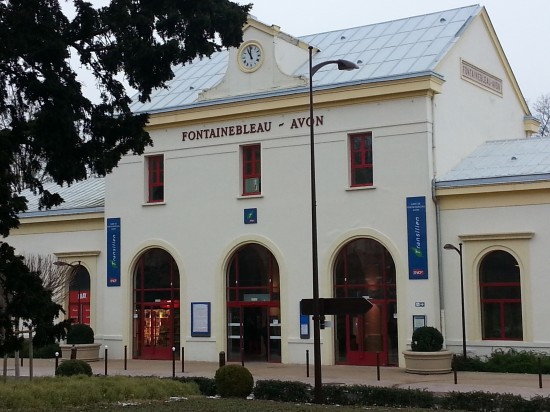 The train station at Fontainebleau

When we arrived, we didn’t see a bus (which we would’ve used our day pass for) so we just started walking.  We came upon a bus stop but there was no bus in sight and quite honestly we didn’t know if it would even be the right bus, so we just kept walking because it was too damn cold to just stand and wait for a bus.

We are good walkers and we were wearing ALL of our cold weather gear, which had kept us comfy up to this point, but it was SO cold that it was kicking our butts.  After 30 minutes of walking we arrived in the central village and we popped in to a cafe for coffee/hot chocolate.  With our bodies once again ready to brave the cold we continued our walk and came upon the most wonderful boulangerie so of course we had to stop.  We both held a pastry in each hand (double fisting) as we left the bakery and wolfed them down as we approached the château. 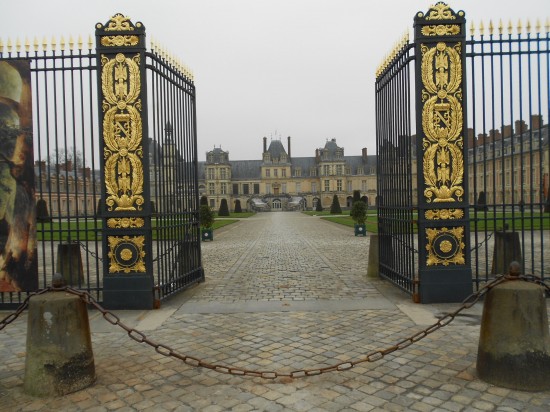 The front gates of the château

Originally, like all good castles, the château was built as a “little” hunting lodge sometime around 1200.  The core of the Chateau of Fontainebleau was almost completely rebuilt by Francois I in 1527 (ish).  From then forward, pretty much every king, queen and emperor loved the château and each of them left their mark, making the château feel somewhat disjointed.

There are a total of 1,500 rooms with 130 acres of gardens.  The château was continuously lived in by the royals and imperials for seven centuries. Let that soak in for just a moment, 700 years of continuous residency, remarkable. Francois I, didn’t want to walk outside from his apartments to the chapel, so what’s a king to do? He built a magnificent indoor hallway. 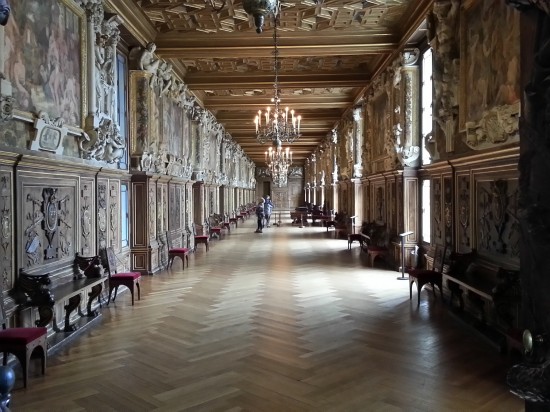 The grand gallery built by Francois so he wouldn’t have to walk outside to walk to the chapel!  Notice there is no natural light coming in through the floor to ceiling windows on the left side.  This gallery was said to be the inspiration for the hall of mirrors at Versailles.

Later, one of the Louis’ closed the windows on one side of the hall so that he could add-on to the building.  I don’t know how they didn’t get lost everyday, but then they probably rarely went outside of their own apartments.  It’s not like they ran down to the kitchen to get a glass of milk at midnight, right?

The Only Coronation Room Left in France

What I loved most about our visit was the fact that we stood in the actual room where Louis XIII was born in 1601.  We stood at the base of the stairs where Napoleon gave his abdication speech in 1814.  The château is home to the only coronation room left in France with the original furnishings and I loved the bedroom suite Marie Antoinette designed but actually never christened because of the revolution. 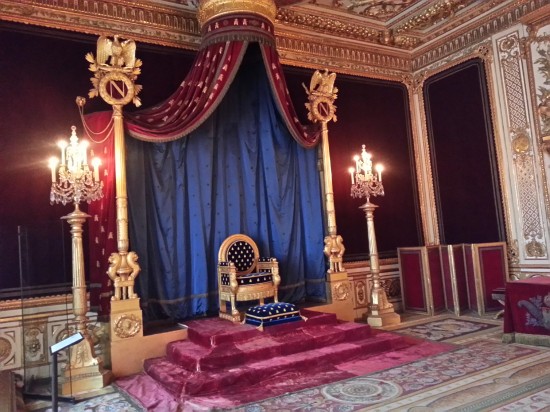 Napoleon’s throne room. The only such room remaining in France with the original furnishings.

In more recent history, the Germans took over the château during the war and it was later liberated by General George Patton.  Somewhere, I read that Patton started a school at the château, which is still in existence, but of course I can’t find the article to share with you. 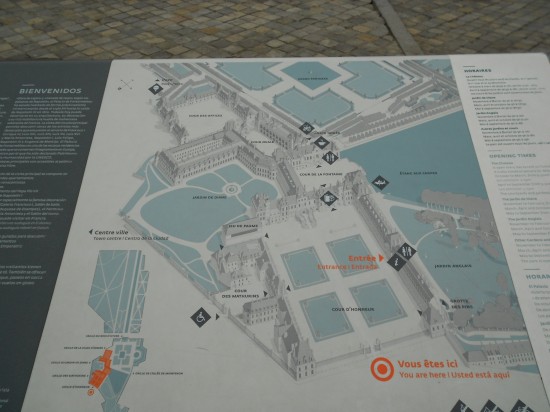 You can see how massive the château actually is!

To tour the château, there is a fee but it is reasonable and it does include the audio guide, which is done very well.  We roamed the château and followed the tour for nearly three hours.  If I remember right there were 40 stops on the tour so you really do get to see a lot of rooms, more than you do at Versailles.

The grounds of the château looked to be beautiful but because it was so cold, and the sky was gloomy and gray, we opted not to tour the grounds.  Where Versailles is bright and gilded, the château is very heavy with wood and brocade.  A much heavier feel to the decor, if that makes any sense at all.

Aging of the Rooms

What’s a bit sad about Château Fontainebleau is that you can see the aging of the rooms, it is clearly in need of continual repair but it does not seem to draw the number of visitors (300,000/year) that Versailles (3 million/year) does, plus Versailles is still used for ceremonial events.  Granted, it was the coldest day of January, but there were so few people at the château, most of the time we were by ourselves in a room, or with just a handful of people.  Not so good for business, but great for us! 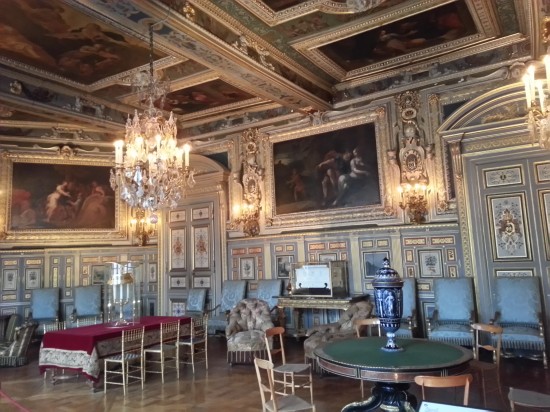 The Louis XIII Salon, the room in which he was born in 1601. It was redecorated just after his birth. 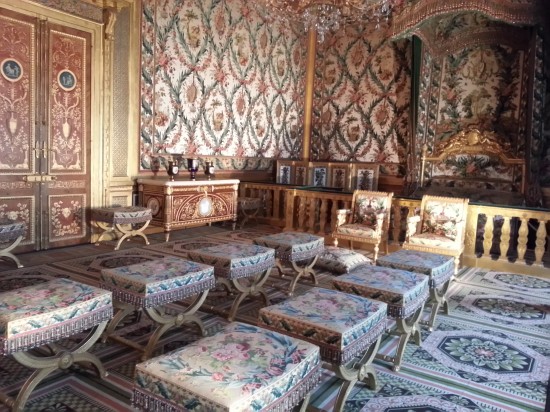 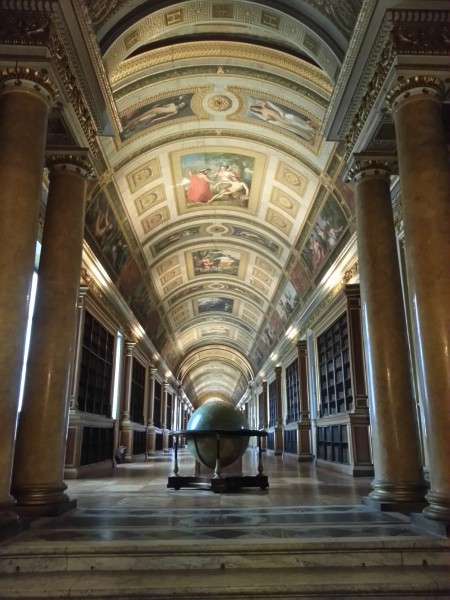 The gallery of Diana.  The decor was originally styled after the myth of Diana. It was redesigned by Napoleon I, but the name was kept. The use of the room as a library dates back to Napoleon III. 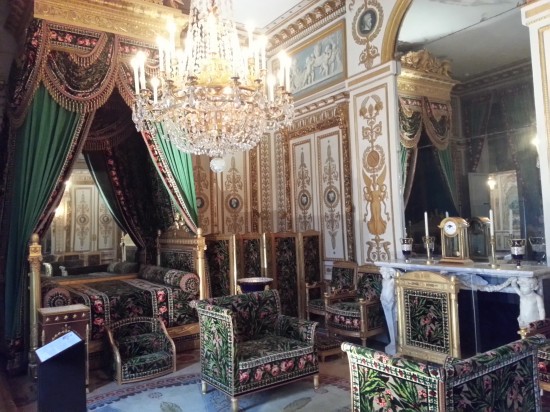 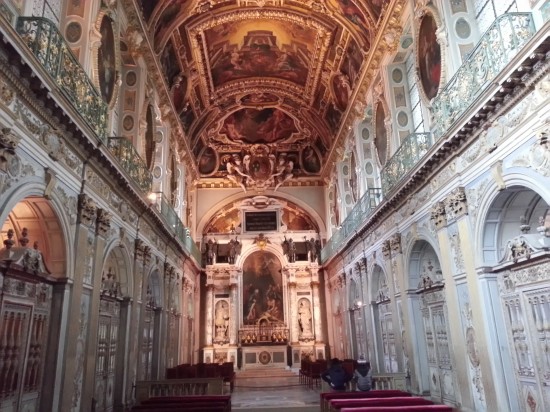 After finishing our tour we left feeling inspired by the grandeur and incredible history of the château, most of which I cannot remember but the audio portion of the tour was very informative. By the time we left the château it was about 2:30 and we were trying to decide how we were going to find our way back to the train station because if possible, it was even colder outside.

As luck would have it we left the grounds of the Château and there was a bus just pulling in to a bus stop so we ran to catch it (our 2nd use of our day pass).  Ever so glad to have caught the bus our smiles drooped to pouty lips as we drove past the boulangerie we found because we had intended to go back and buy a bag of what looked to be homemade doughnuts.

Oh, and while I’m speaking of doughnuts, we did in fact spend 3 weeks in Paris (eating our way through croissants and baguettes) and did not gain a single pound, thanks to all of the walking. Whew… Anyway, back to the train station and our luck continued when we discovered there was an earlier train leaving for Paris in 4 minutes (3rd use of the day pass). Once we returned to Paris we used our day pass two more times to catch Metro trains back across the city so it really was a good bargain. 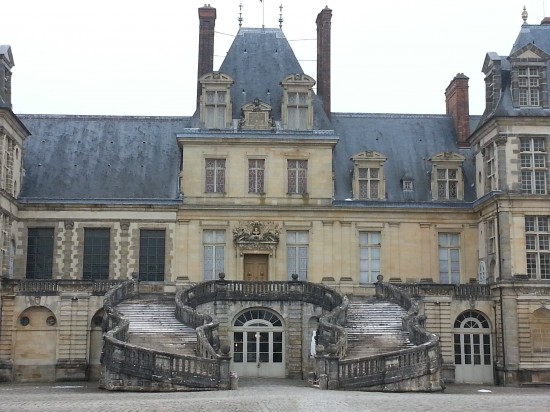 The horseshoe-shaped stairs where Napoleon stood and gave his abdication speech in 1814. He lived the rest of his life in exile.  One lost war and just like that… you’re out! 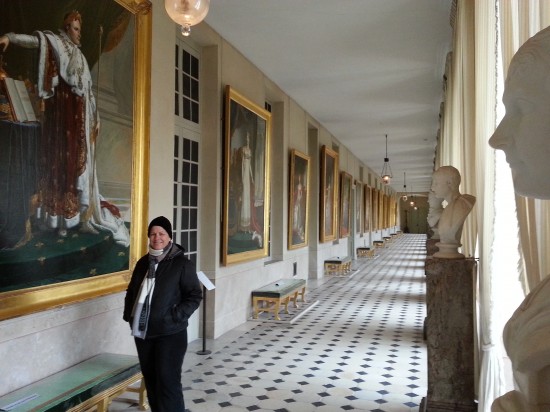 The château was Napoleon’s favorite, his influence is seen throughout.  This is a gallery of his family members’ portraits. 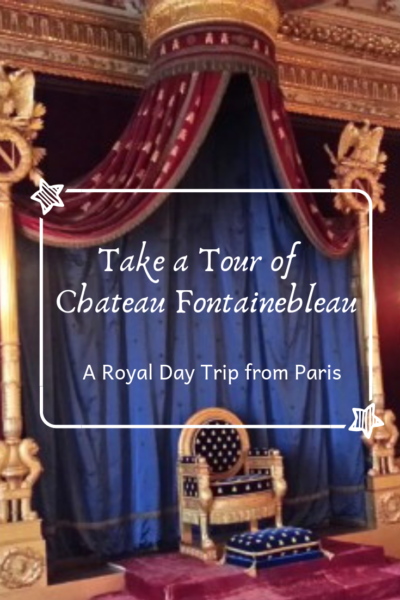