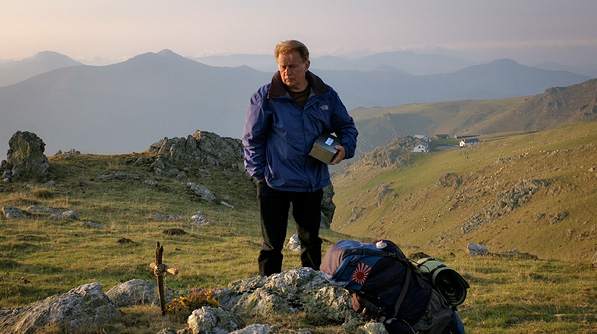 It’s funny how some moments in time stay with you – inspire you.  It’s what I felt while sitting in a dark theater watching the documentary, “Walking the Camino – Six Ways to Santiago.”  I left the theater vowing to myself (and to Abi) that we need to make the journey, to walk the Camino.

You can read my review of the documentary here.  After publishing the review many readers asked if we had seen the movie, The Way, starring Martin Sheen.  I’d heard of the movie by way of the documentary but had not seen it, until last night.  And now, even more so, I find myself inspired to make the walk.  Sometimes we can’t quite put into words what captures our hearts and imagination, but there is just something about the walk that touches me and makes me keenly aware of the possibility of taking on such a journey.

While the documentary focused mainly on six pilgrims making the walk, The Way is a fictional story which is filmed entirely in France and Spain. Daniel, portrayed by Emilio Estevez who also wrote and directed the film, is a near 40-year-old anthropology doctorate student who decides he wants to see and experience the world, not just study about it in books.  His father, Tom, (Martin Sheen) is frustrated with his son’s decision and balks at his wanting to see the world.  Tom, a widower and an ophthalmologist is content with his 9 – 5 life; a life he tells Daniel he chose. But as good-byes are said, Daniel utters the words, “You don’t choose a life Dad, you live one.”  Watch clip here.

You could easily say the film is predictable – a tragic loss, Tom, completely unprepared and almost begrudgingly takes on the walk to honor his son – and as the story unfolds you know where it is going.  But, here’s the catch, as predictable as it is, it is the unfolding of emotion that takes place as the miles pass, that captures your heart.  Personally, I think Martin Sheen could act his way out of a box and he does not disappoint in this film.  He wears his emotions (or the restraint thereof) profoundly and while in the beginning of his trek he is nearly silent, you know exactly where his head and heart are. 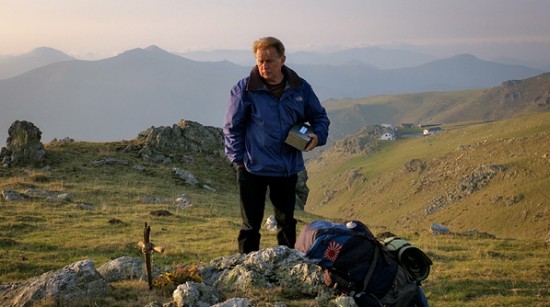 Tom at the beginning of his walk – alone with his grief and Daniel’s ashes. Photo credit: The Way Media Gallery

Wanting to walk the Camino alone with his son (whose ashes he carries) Tom is put in situations where he has to come to terms with encountering and slowly befriending others.  As a result the most unlikely foursome – Tom, Sarah, Yost and Jack – come together on the walk. 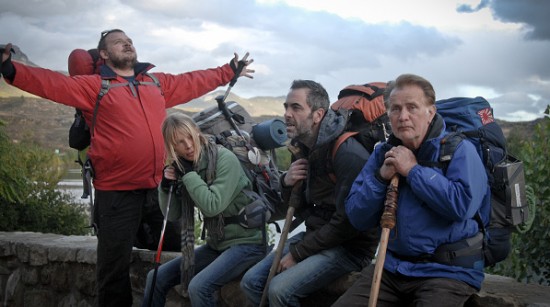 Two especially poignant scenarios in the movie both include Tom losing his backpack along with Daniel’s ashes.  As both situations resolve Tom begins to let go of misconceived perceptions he has carried throughout his life and he learns to embrace the experience of the walk.  And as the personal stories of Sarah, Jack and Yost unfold, Tom opens his heart and lets them in.  But it’s more than that, Tom once again opens his heart to the world – he’s been lost for a long time.  The final scene of the movie, which I will not give away, is exactly as it should be and I would have wanted no less.  It’s the last gift Daniel gave his father and it is beyond moving.

The Way is beautifully filmed and gives one a good sense of what it must be like to walk the Camino.  Across mountains, valleys and farm land, through cities and along road ways, throngs of people from all walks of life and from all parts of the world, walk the Camino.  Everyone has a story – a journey to complete.

If you have not yet had the opportunity to see the documentary, watch for it to come to your town and if you have not yet seen, The Way, by all means order it today and maybe, if it’s meant to be, we’ll see you on the El Camino de Santiago.  Buen Camino!