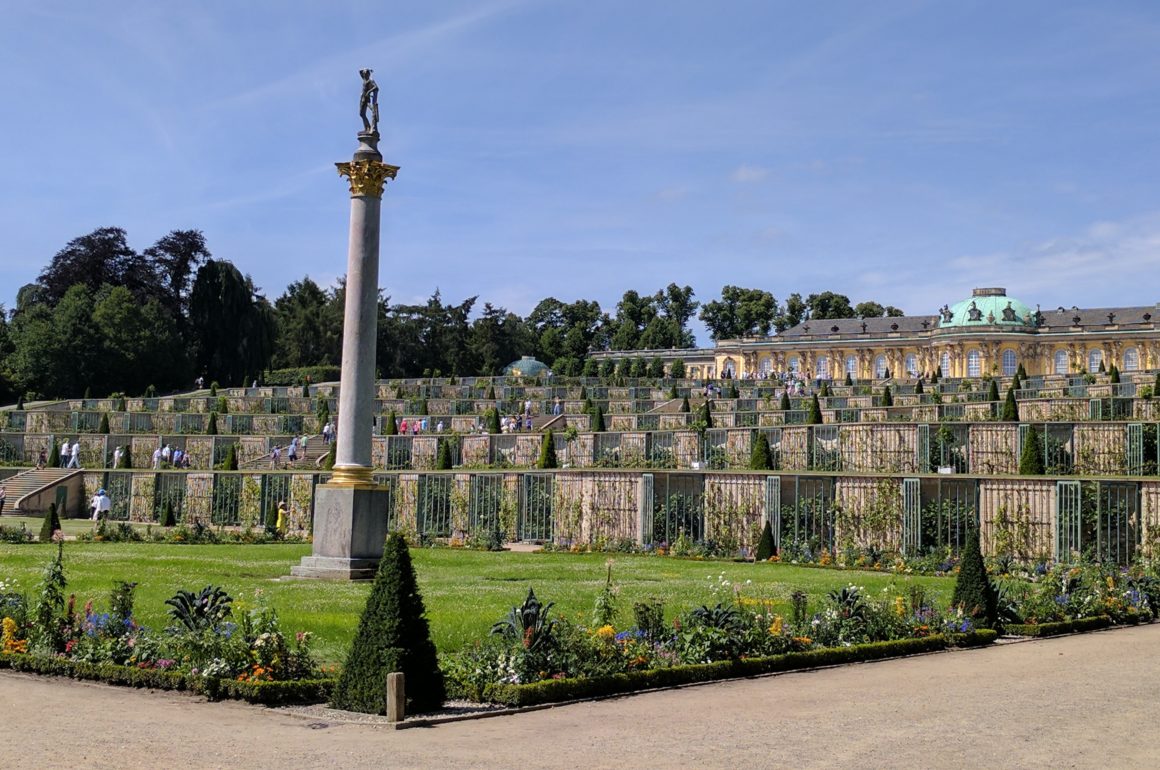 Potsdam, Germany.  Melk, Austria.  Mondsee, Austria.  Have you heard of them?  They were not at all on our list of chosen destinations while traveling across Europe with Eurail.  And, yet, these unexpected treasures turned out to be three of our most memorable experiences.

With that being said… here’s a few words about our not so well-known travel picks that just might inspire you to pack your bags and take off on your own European adventure.  Sometimes, the places you stumble upon turn out to be the best of the best.  It’s such a delicious surprise when it happens.

Okay, so maybe you’ve heard of – or even been to – Potsdam, Germany, but it was an unplanned discovery for us and a delightful one at that. We traveled by local train from Berlin to Potsdam, which proved to be an easy 30-minute ride through the woods.  If I remember correctly the cost of the train ticket was minimal.  Initially, we wanted to take a guided bicycle tour of Potsdam but the logistics didn’t work so we hopped on the train and set off to discover Potsdam on our own.  And, as it turned out, at the Potsdam train station we picked up a handy dandy walking map. 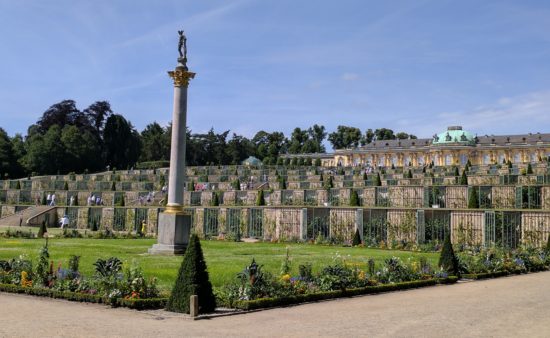 The Sanssouci Palace – summer residence of Frederick the Great.

We figured, if the Prussian King, Frederick The Great, believed Potsdam to be a city worthy of building a summer palace, it was certainly worthy of a day trip for us and it did not disappoint.  Don’t you love those royal souls who proclaimed themselves to be The Great?  Hello!  I am Patti The Great.  It works. 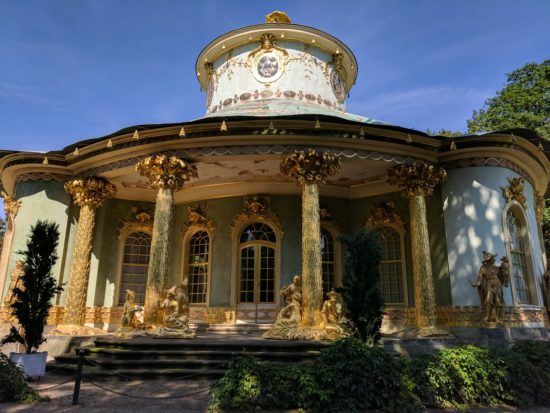 The Chinese House. A garden pavilion on the grounds of Sanssouci Palace. Because every family needs a Chinese Tea House. Right?

Aside from the fact that Potsdam is an utterly charming little city with pedestrian-friendly streets lined with shops and cafes, the Sanssouci Palace and the vast surrounding gardens, are a highlight of any visitor’s time in Potsdam.  We think King Frederick had it going on and knew exactly where to build his summer home.  And, although we opted not to take a tour inside the palace, our time meandering the gardens was decidedly beautiful.

The one thing I really (seriously) wanted to experience while spending time in Vienna was to take a 1-day cruise on the Danube River.  In my head, it was the iconic thing to do.  Perhaps the call stemmed from my absolute nerdy love of history, but the Danube River did in fact call to me.  I had to experience it.  What I (we) didn’t know about was the beautiful village of Melk, just a short train ride from Vienna and home to a Benedictine Abbey – The Melk Abbey. 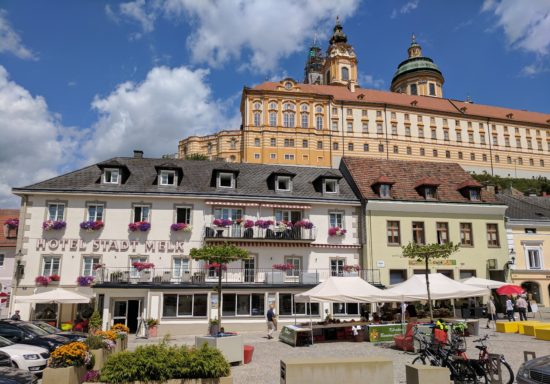 The Melk Abbey sits majestically above the village of Melk.

Once we figured out how (thank you Rick Steves) we could take a train to Melk, cruise the Danube and return to Vienna by train from Krems, all in the same day, there was no stopping us.  While we thoroughly enjoyed the City of Vienna and it’s historical wonders, our day trip to Melk was a definite highlight of our stay in Vienna.

Sometimes, words seem to fail in the scope of description and pictures don’t suffice.  You kinda have to be there to see it for yourself to appreciate the grandeur.  (Photos were not allowed inside the Abbey) The abbey has been sitting on top of the hill for centuries and the walls have more stories to tell than one could ever even begin to imagine.  Today, it is home to a coed school of some 900 students, one of which served as our knowledgeable and personable tour guide. 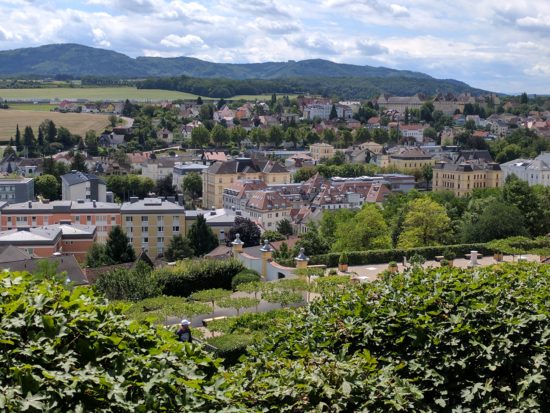 The picturesque village of Melk, Austria.

Once we toured the Abbey and the peacefully serene gardens, we boarded a boat which slowly floated us down (up?) the Danube River to the town of Krems.  From Krems, we boarded our return train to Vienna.  As we cruised the Danube we sat back and relaxed with a glass of wine and watched the world float by.  It was exactly what I had conjured up in my imagination.  I could have easily just kept right on going, but alas, all good things come to an end. 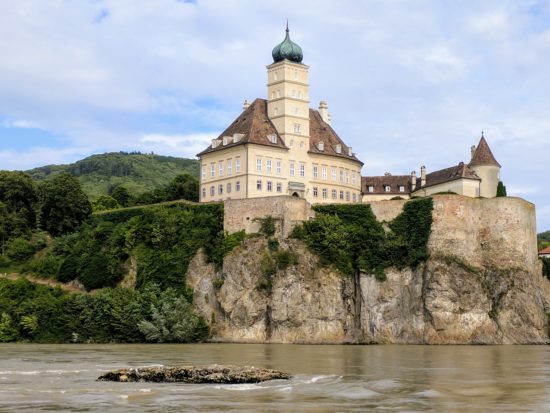 Isn’t this exactly what you would expect (hope) to see as you cruised the Danube River?

I have a deep appreciation of the film, The Sound of Music, but not for the reason you might suspect.  It was through this appreciation that I yearned to visit Salzburg, Austria.  And, it doesn’t surprise me in the least that we found another best of the best in Austria.  I swear, the country is magical.  I (we) love that city and would return in a nano-second.  A month, or two, or three in Salzburg would serve us well.  Add in the the fact that we traveled by train through the Alps, and well, there are no words. 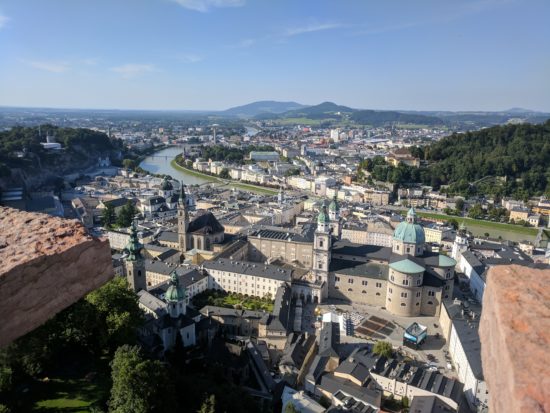 Five days in Salzburg was just way too short of a time.  Yes, the city is small but it holds so much charm and the surrounding countryside is beyond stunning.  It really is a fairy tale picture book.  It was from Salzburg that we took a bus to Mondsee.  It’s not that we wanted to spend a day outside of Salzburg – far from it – but we did want to take in a bit of the gorgeous countryside and while riding bicycles and singing along with Fraulein Maria, someone told us we should visit Mondsee.  And, that’s just what we did.

What can I tell you about Mondsee?  Um… picture a beautiful little village set alongside a spectacularly beautiful lake in the Alps and well, that’s Mondsee.  But, it is also home to the Basilica of St. Micheal which is where the Hollywood version of the wedding between Fraulein Maria and her Captain was filmed. 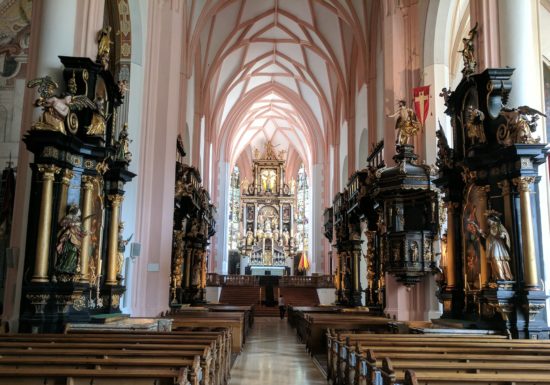 The Basilica of St. Michael.

The Best of the Best

As I said at the start of this post, Potsdam, Melk and Mondsee were not at all on our planned European itinerary.  But you know what they say about making plans, right?  Sometimes, it’s the unexpected destinations that bring about the most memorable experiences.  Experiences, that as much as you’d like to return to relive them, you almost hesitate to do so because maybe the actual experience won’t live up to the memory. 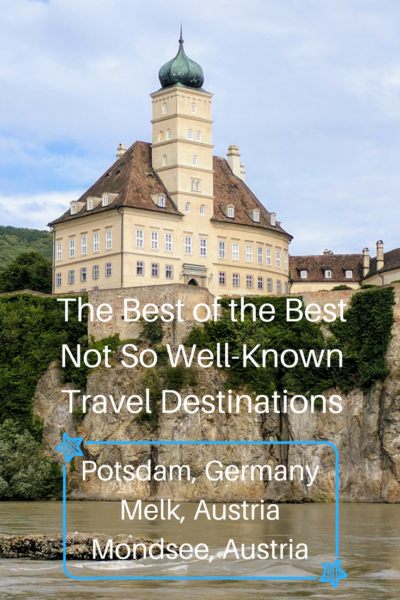