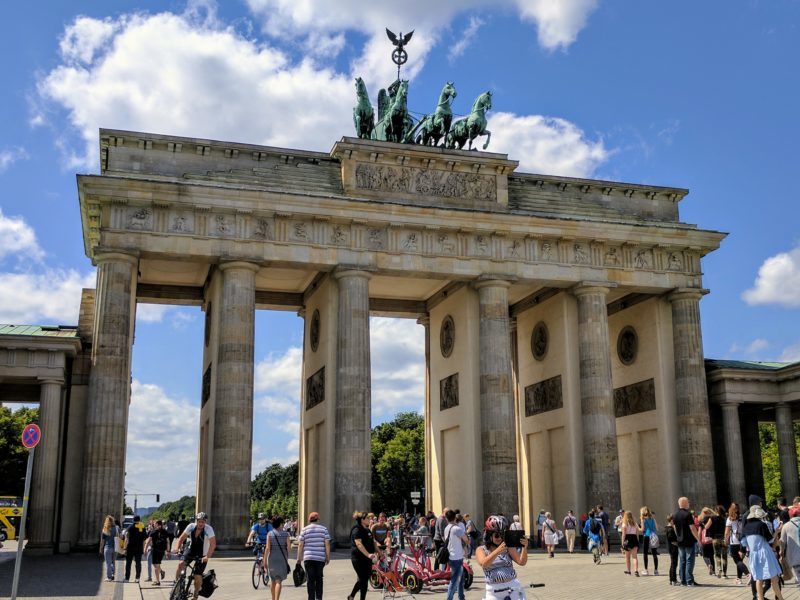 We took a free walking tour while in Berlin.  It was comical on a few levels, but it was all good.  Our guide, who was Brazilian and German, was adorable and highly personable.  She was also a nervous Nellie as ours was her first tour as a guide in Berlin after only living in the city for two months.  She was a bit tongue tied and probably forgot most of her own tour notes but she could not have been any sweeter. 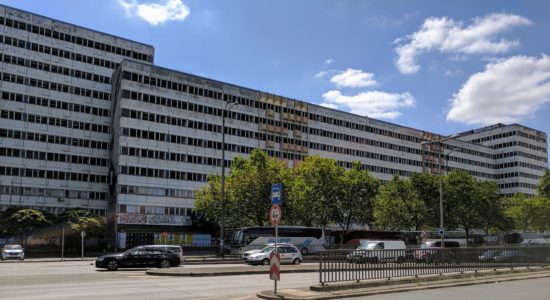 An abandoned east Berlin building that once housed what I want to call the secret police because I can’t remember the real name. Apparently, the building was under consideration to house Syrian refugees, but it was not cost effective as the building is in an advanced state of disrepair.  Notice how cold and stark the exterior is.

There were eleven of us who started the tour but we were very soon down to nine. Not quite sure what happened to the two that disappeared but a small group is a good thing, you can hear the guide and ask a few questions.  Especially, when everywhere we went in the city we saw big groups of 30+ people following a seemingly floating umbrella along the sidewalks.  Follow the umbrella! 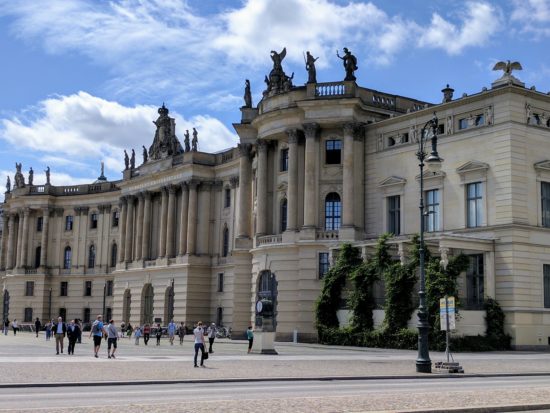 The library at Humboldt University – sadly, this is the site where books were burned by the Nazis.  Note the contrast between the architecture of the abandoned east side building to this library in the west.

Grandparents in the Group

Abi and I were the elders in our group, old enough to be everyone’s grandparents.  Without exaggeration.  Considering our age and the fact that we were the only two people from the US and everyone else in the group was maybe 25 and from the UK, France and Australia, it was a pretty good bet we were the only two who knew about the role of Berlin in WWII, or dare I say the only two interested?

Not one comment or question on point was made by our fellow groupies.  Comical.  But, they were all quite nice – albeit very quiet – and it made for a very pleasant afternoon. 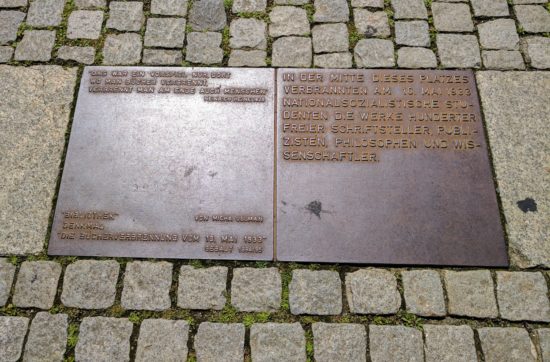 A plaque on the ground in front of the library. It translates to: “Where they burn books, they will also ultimately burn people.” Heinrich Heine

Truthfully, I would have loved to have gleaned more information about points along the tour such as Check Point Charlie and I’m sure a more seasoned guide would have been able to impart more knowledge, but we figured, hey, everyone has to have a first day at the office – so to speak.  And, as I said she was adorable and you could forgive her most anything.

We filled in a few English words for her from time to time. You know, those long orange things that grow in the ground – carrots.  She was telling the story of how people in East Berlin turned a war-savaged public square into a garden to grow food for the survivors. 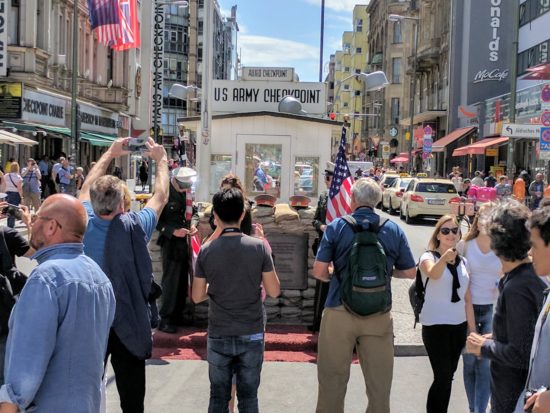 Checkpoint Charlie. I think this photo says so much, doesn’t it? It was challenging to be in the moment so we just moved on.  Those are actors, by the way, not soldiers.

She kept apologizing throughout the 3 1/2 hours of the tour, even though apologies were not at all necessary.  As everyone tipped her and said good-bye, I asked her if she had ever heard of Julia Child.  No, she had not.  How sad is that?  Anyway, I explained to her who Julia was and that she had a firm rule in the kitchen – never apologize.  Just own it and move on.  I encouraged our sweet guide to do the same. 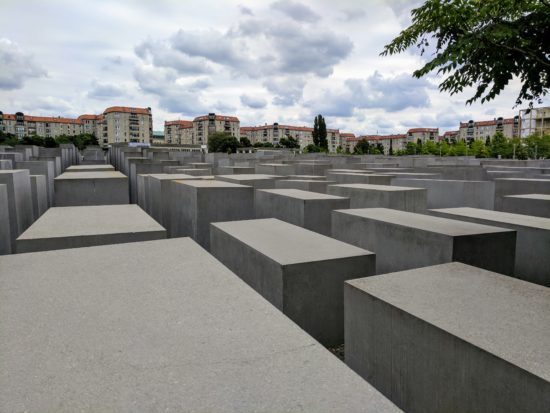 The Holocaust Memorial. It was a challenge to capture this moment as there were children and adults alike running up and down the passageways and jumping from the top of one memorial to the next. It was disheartening to witness the antics.

I have to say though we really enjoyed the tour, our sweet guide, and the oh so quiet fellow groupies, and we learned a few things.  What else is there?

Aside from the tour, we enjoyed our five days in Berlin.  See, there’s that whole five days theme again.  Berlin is HUGE with a population of approximately 3.7 million, so having only five days to explore the city provided just a glimpse, but it was a good glimpse.  It’s a vibrant city and it kept us on our toes.  Like so many large cities, people are on the go, go, go and it’s best to keep up with the flow or get out of the way!  Surprisingly, it proved to be a fairly walk-able city, although I will admit we do tend to walk more than the average visitor. 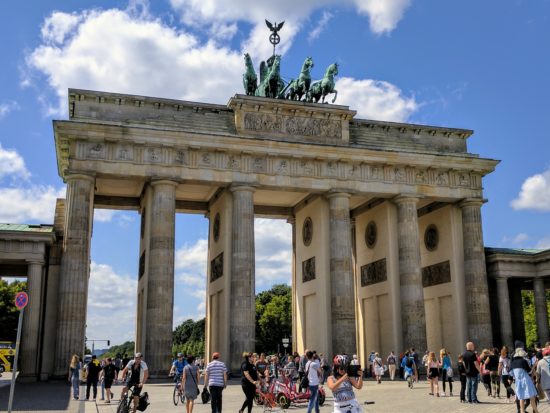 The Brandenburg Gate – built 225 years ago.

Berlin has an incredible history dating back centuries, but most of us – I suspect – think of Berlin in more recent historical terms.  When we think Berlin, we think the Berlin Wall, which came down in 1989.  That’s only 28 years ago!  That kind of boggles the mind, doesn’t it?  The city seemingly continues to move forward, not shying away from the past but owning it, learning from it and moving forward. 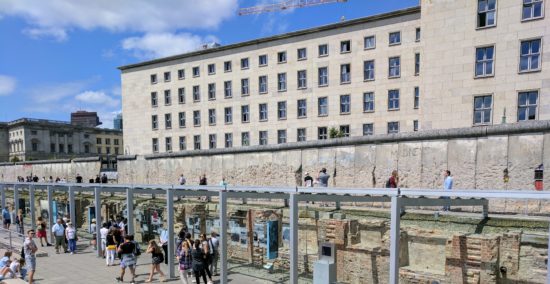 The Berlin Wall – the construction of the permanent wall was completed in 1961 and it was demolished in 1989.

And, lest one thinks Berlin is all about war and a painful past, far from it.  How pretty is this?  Thanks Berlin! 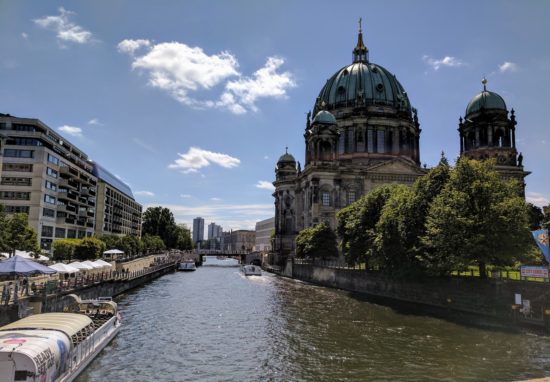 We took a self-guided walk along the east side of the Berlin Wall, which you can read about here: The Berlin Wall: East Side Gallery.

We were media guests of : Visit Berlin 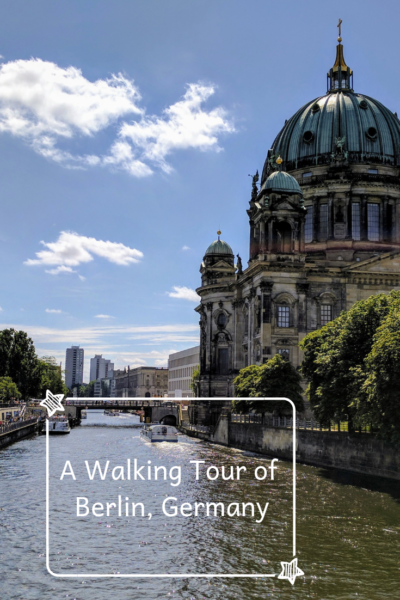