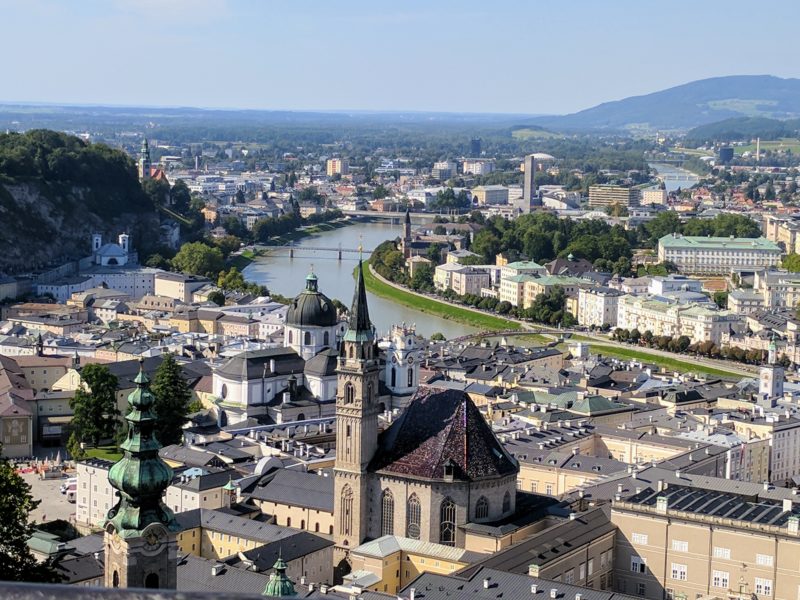 I’m going to go out on a limb here and proclaim that Salzburg and the surrounding region has got to be some of the prettiest country we’ve ever seen.  Actually, Austria takes the prize for spectacular scenery.  I don’t think it could get much better.

Traveling by train from Slovenia to Austria through the Alps was beyond breathtaking. We kept hopping from one seat to another across the aisle trying to take it all in.  There are no words for the sheer magnitude of those mountains wearing more shades of green then you can imagine. 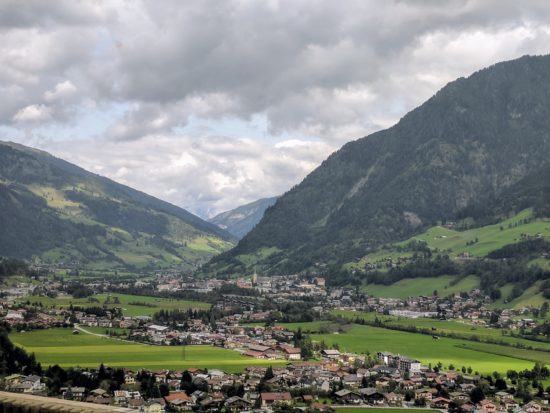 Traveling by train through the Austrian Alps.

There are places in this vast world of ours that we’ve wanted to visit only to arrive and think, “This is it?”  Meh.  Not Salzburg, not a chance.  I’ve had Salzburg on my radar for years.  It just seemed to be one of those places that fairy tales are written of.  I’m not even sure why I believed that, it probably had something to do with The Sound of Music, but the city did not at all disappoint.  We left wanting more.  And, that says a lot in our book.

Was it busy in August, you bet.  We were warned it would be busy because of the Salzburg Music Festival, but really it wasn’t a problem.  The only area we felt the crowds was in the old town shopping district and we didn’t spend much of our time there so it didn’t impact us.  We actually stayed about 3 miles from the old town and used the efficient bus system to travel back and forth so we had the best of both worlds.  Easy transportation and quiet accommodations.  Always a win-win.

What’s Not to Love?

Maybe it was the unbelievable views from the fortress on the hill overlooking Salzburg that captured my imagination. 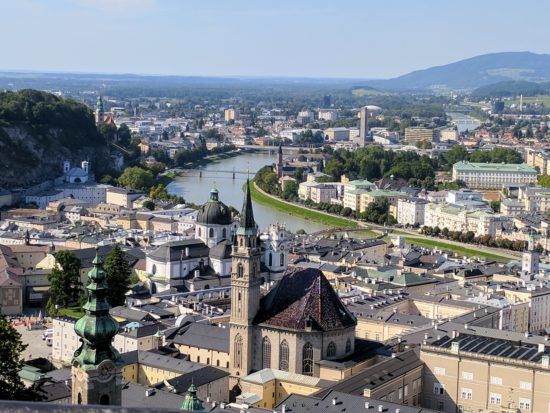 Overlooking the City of Salzburg and the River Salzach

Maybe it was the fact that women actually wear dirndl dresses, men wear lederhosen and in every other shop window there are ridiculously adorable dirndl dresses for little girls.  I spent a fortune window shopping picking out which dresses I wanted, and wondering how I would look wearing them in the states, and how many little girls did I know that I could buy dresses for.  And, no, it never entered my mind to suggest lederhosen to Abi. Not once. Well, okay, maybe once but I don’t think I said it out loud. 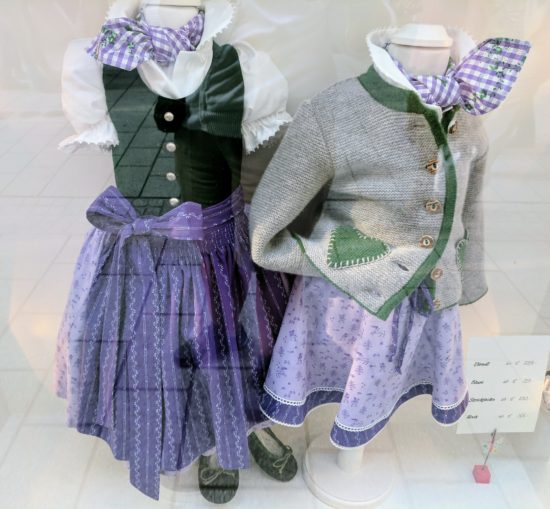 Ridiculously adorable, am I right?

Salzburg has some of the best signage ever!  The cobble stoned streets in old town are lined with them and they definitely add to the fairy-talesque of the city.  This has got to be the classiest McDonald’s sign ever. 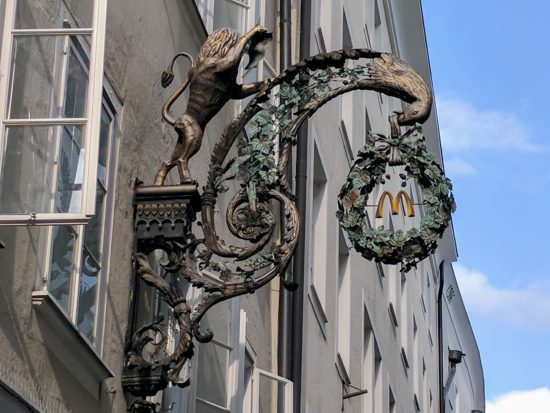 Or just maybe it had to do with the day trip we took to Lake Mondsee where we ate lunch at the water’s edge, took a boat ride and walked in the path of Julie Andrews and Christopher Plummer.  Another story for another post, but I can tell you we had ourselves a day. 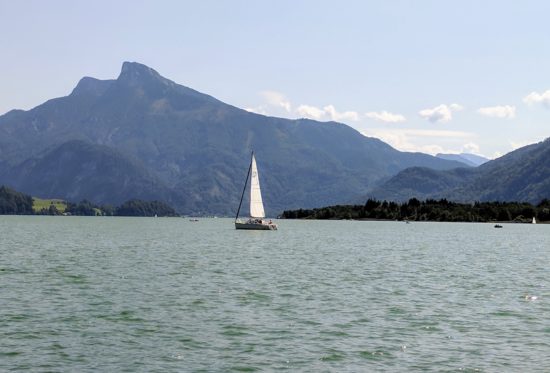 Lake Mondsee, about a 45-minute bus ride from Salzburg. A beautiful day was enjoyed by us!

The Sound of Music

Pretty sure our sing-a-long bike ride with Fraulein Maria had something to do with our love affair with Salzburg. It was just too much fun and I’m still singing the sound track from The Sound of Music in my head. The hills are alive with the Sound of Music, With songs they have sung for a thousands years…  there, now the song is stuck in your head as well.  I dare you not to sing it.  Go, on.  You know you want to. 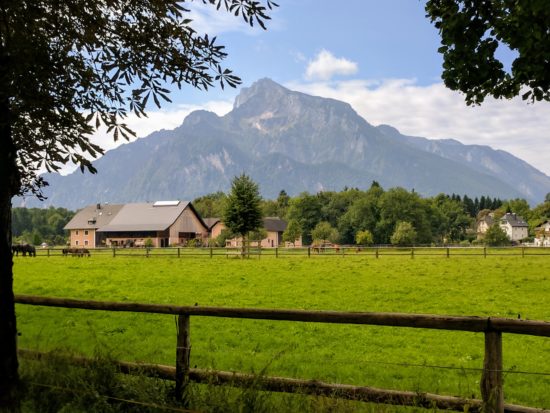 The hills are alive with The Sound of Music… this was the view from my bad ass purple bicycle.

We were told to expect a lot of rain while visiting Salzburg but we enjoyed ideal weather, it only rained once, overnight.  I think we earned a few days of ideal weather after melting in the sweltering heat while in Budapest.  This is where we were just before it started to rain; enjoying a free showing of a previous Salzburg Music Festival performance.  Pretty great, right? 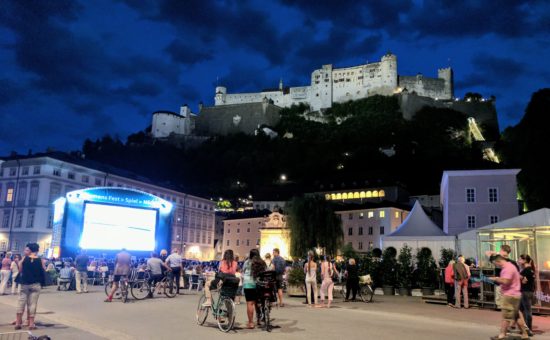 A free showing of a past performance with the fortress ever vigilant.

There are countless reasons why we fell head over heels for the city and people of Salzburg and why five days just left us wanting more, but sometimes words just aren’t enough.  Sometimes, it’s a heartfelt reaction that just takes hold of you and won’t let go.  And, sometimes, it’s a good thing to leave while still wanting more because it offers a reason to return.  Thank you, Salzburg, we’ll be back! 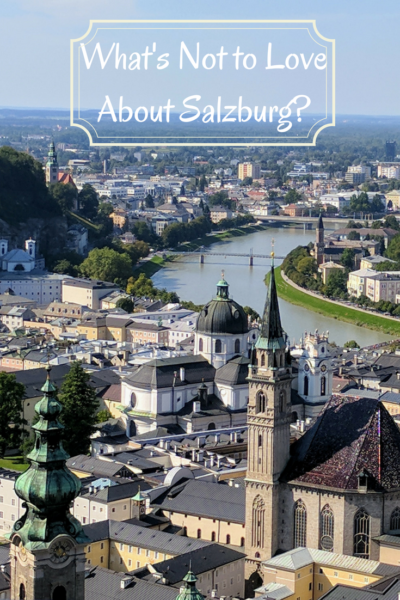 Our Salzburg Cards were sponsored by: 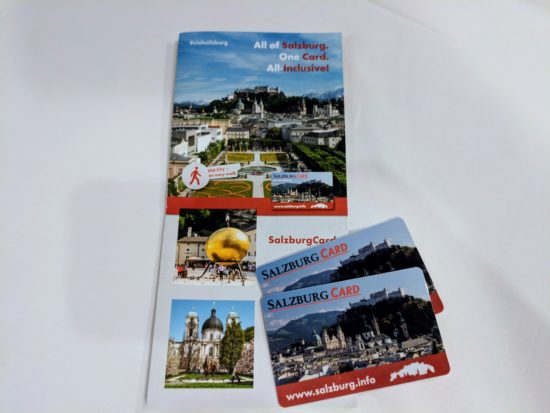 A Weekend in Zagreb, Croatia