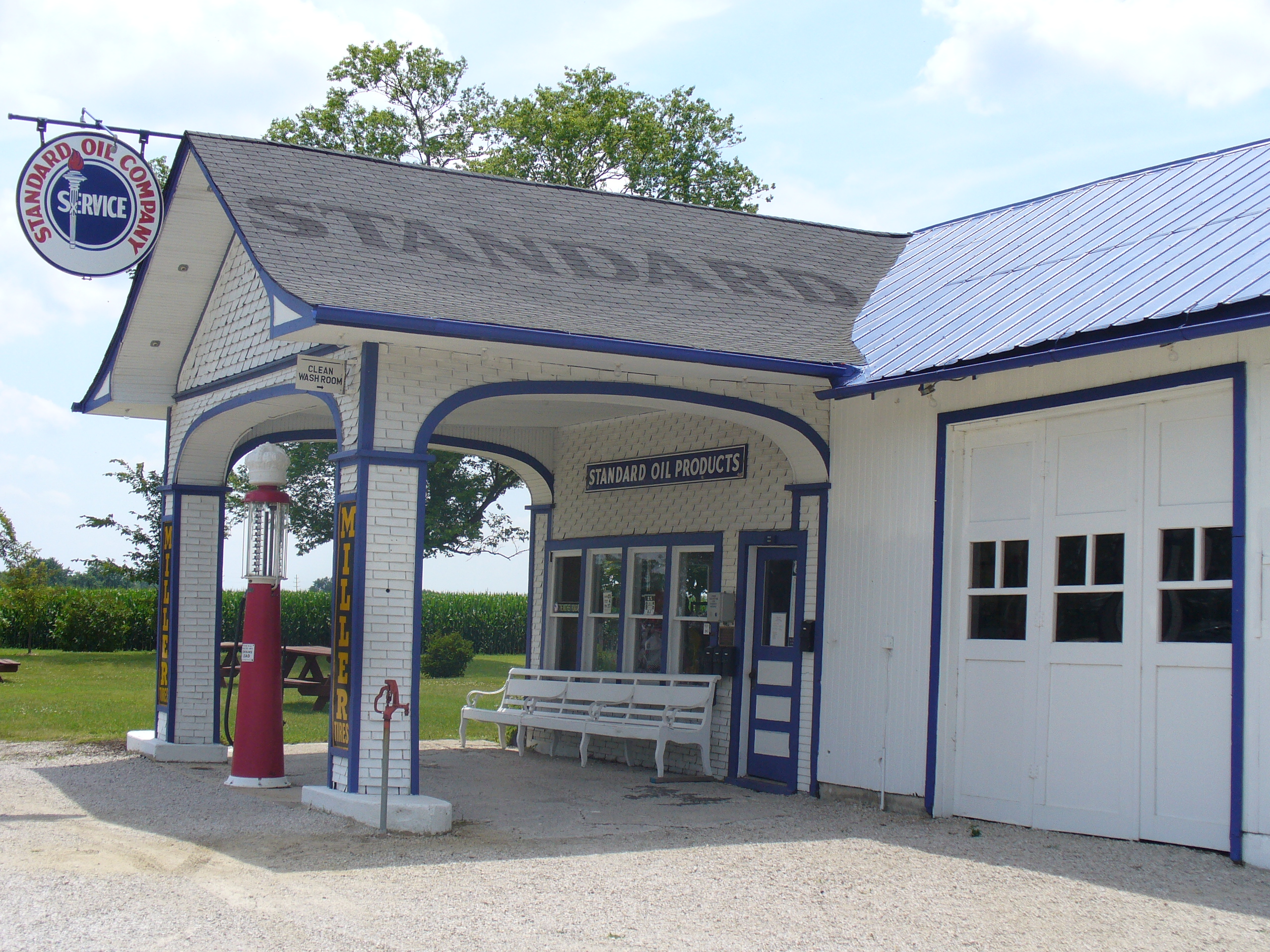 Not only had I never been to Chicago before this trip – I had never been anywhere in the state of Illinois and I was about to learn a lot about the state.  When you grow up in one part of the U.S. you don’t really know what’s going on elsewhere – you know, like I never thought of Illinois as farming country…

I don’t know why, I suppose I should have, but I was about to find out just how much farming was going on in Illinois!

If you remember we flew to Chicago, which means our game plan was to rent a car and drive back across the country.  Of course the gas prices are at a all-time high, but what the hell?  Oh, and it cost quite a few precious pennies to cover the “out of state” rental.  But, when you have limited time you make it work, right?  With that being said, it was most pleasing to be offered a free upgrade for the rental.

When we arrived at the car rental office we were told about the upgrade and that they had 3 SUV’s available.  They gave us a choice and we both instantly said, “Which one gets the best gas mileage?” I suspect for some reason they wanted one of them off of their lot so they let the crazy people who were renting a car to drive across country – drive it to California.  So, we are driving a Susuki, which I promptly named Susie, and she is proving to be a nice comfortable car.  I was happy about having a larger car but the gas mileage won’t be so good.

We hit the road and stayed on the freeway to get out of Chicago before finding our way over to Route 66.  It turns out Illinois has done a great job with signage and we didn’t have any problem finding our way. Actually, Route 66 ran alongside the interstate for most of the way, but would veer off through each of the small towns.  This is it – we’re on Route 66! 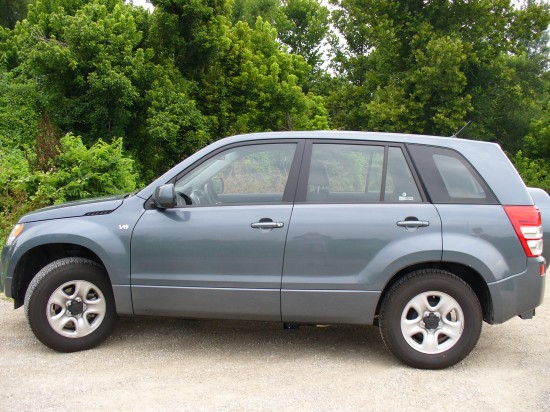 We are making good use of the 66 EZ travel guide and once we got the hang of how it is laid out, we are finding it very helpful.  Besides having maps, it offers points of interest, what places to look for, watch for that building, look for this, look for that, etc.  I told Abi I feel as if we’re on one big giant scavenger hunt.

Speaking of giants – there are GIANT alerts in the EZ guide as well and we were able to find one of them in a tiny town.  It was the Gemini Man (about 30′ tall) at the Launching Pad Drive-In.  We stopped for the photo op and decided to go in for lunch, but there was no a/c (and it pretty much felt like being inside an oven) so we left. 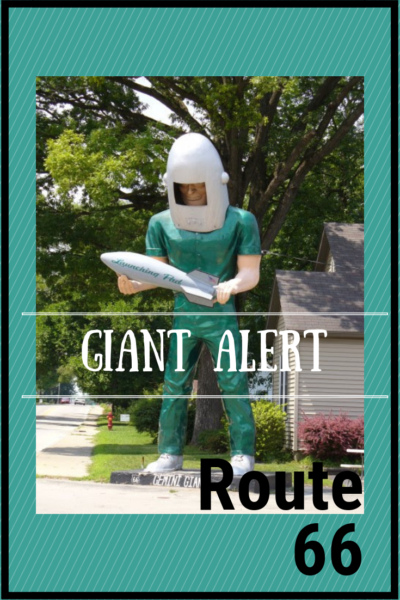 We went on to the next town and ate at The Polka Dot Drive-In in Braidwood, population 5,200.  It was too much fun! Apparently, it’s the place to be at lunch time in Braidwood because everyone was there.  We ordered double cheeseburgers ($2.50 each) and the lady said, “Do you want everything on them?” and we said, “Sure!”

Turns out, “everything” translated to mustard, ketchup, diced onion and a pickle slice, no produce whatsoever. I told Abi, “It’s a good thing we asked for everything!”  Actually, they were pretty good as were the fries and the deep fried cauliflower!  Watching all of the locals was also highly entertaining. 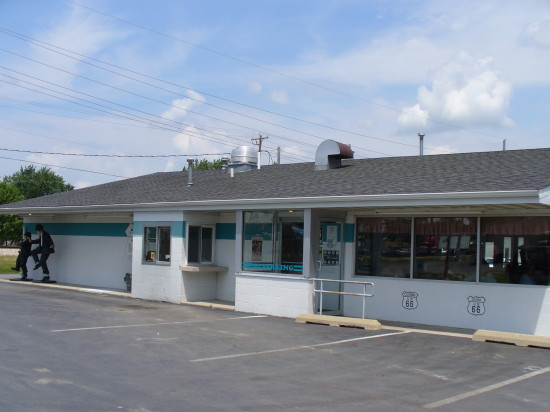 Back roads of Illinois

On the road again and making our way along the back roads of Illinois, enjoying the small towns with tree-lined streets and green lawns, we came across a restored gas station and out front was a 1953 Winnebago travel trailer, which was made of wood with all of the modern conveniences (for 1953 that is).  Working inside the station (now a souvenir store) was a really nice guy who was chatty about the route, being a member of the local restoration society; he has made the drive and said Illinois definitely has the best signage. 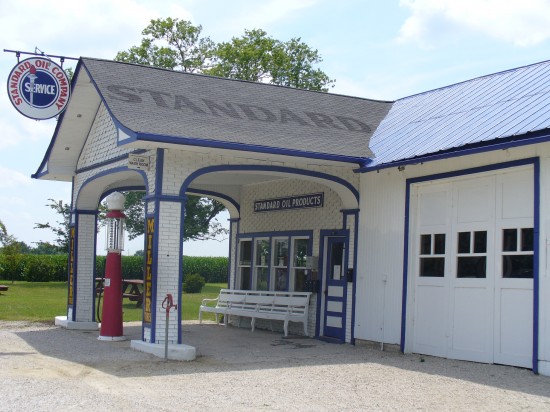 Standard Oil – Odell, Illinois. There were only two columns for the price of gas (on the pump) no room for the dollar! Imagine that!  Gasoline for less than $1/gallon.  Where have you seen this photo before?!

There were many restored gas stations along the route.  Here are just a couple. 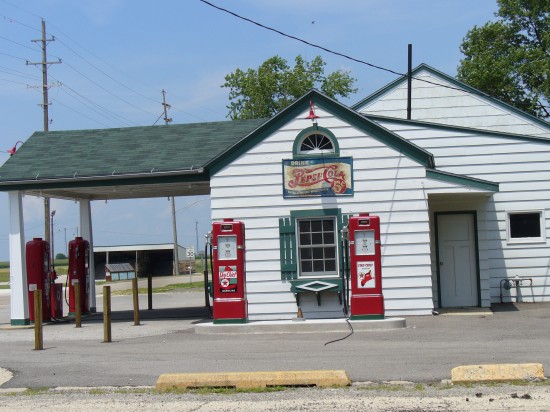 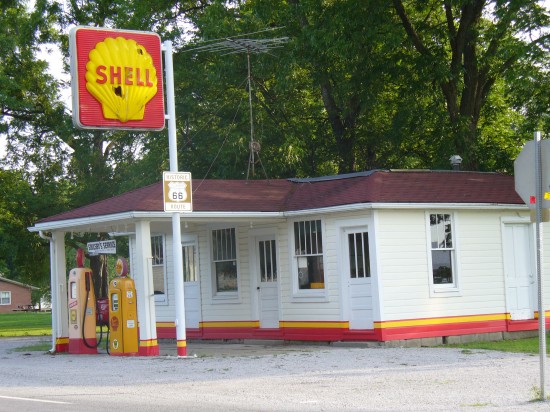 The Element of Surprise

When planning a road trip such as driving Route 66, it’s good to have a basic game plan but the element of surprise along the way can be the best part of the trip.  Originally, we thought we wouldn’t make any hotel reservations, just see how far we got each day.  But, after much consideration we decided this was probably not a good idea, primarily because we had limited time and if we didn’t plan a destination point for each night, we might not get the full experience.  In turn, we might spend too many days in the midwest and then have to push through the southwest. 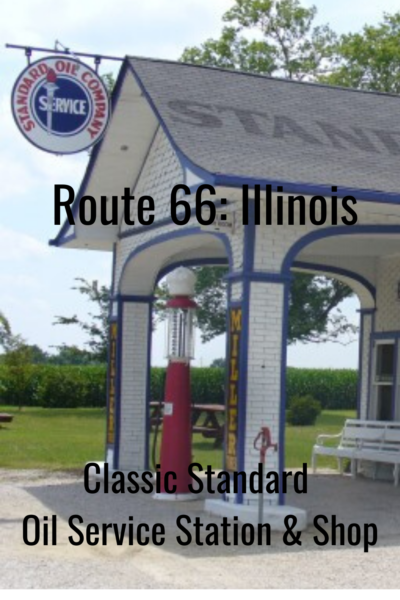 In the end we did choose our destination points and we booked a hotel room for each point.  This turned out to be a really good decision on our part.  And so, we’ve figured out the guidebook, we’ve hit the road and we’re on our way! 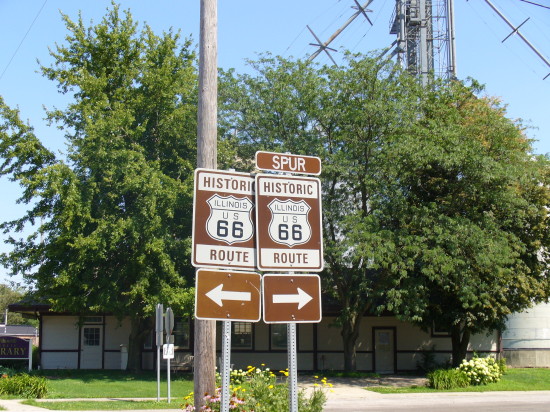 Well it winds from Chicago to L.A.
More than 2000 miles all the way
Get your kicks on Route 66