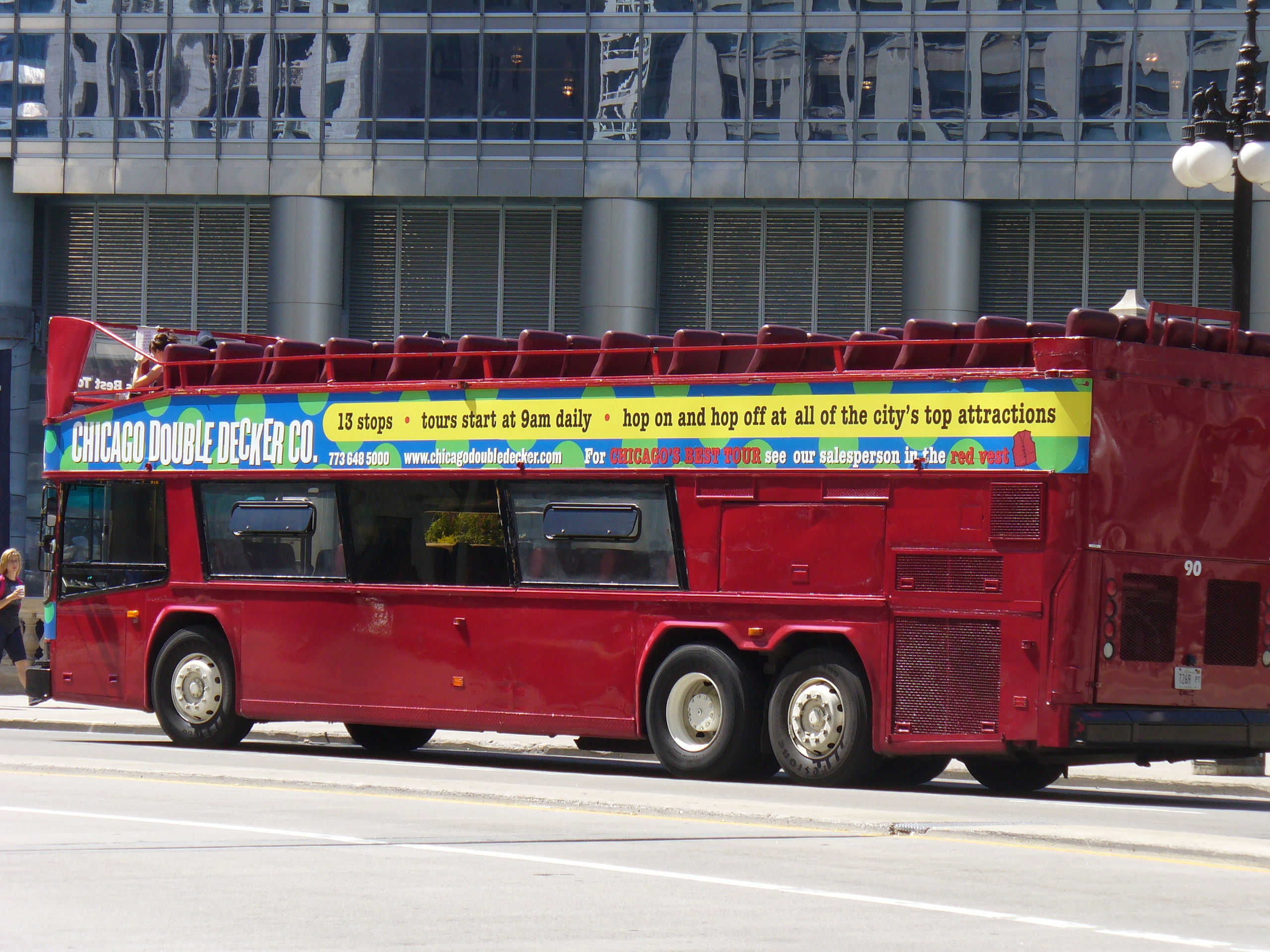 Exploring Chicago, day two.  Okay, admit it.  When you travel to a new city you just want to climb on board one of those double-decker, cheesy looking, brightly painted  buses that drive tourists all around the city.  Right? Today, was the day.  After wandering Chicago yesterday, we decided the bus was the order of the day.

Our feet would thank us and we’d get a great overview of the different areas of the city – we’d get the big picture.  There were 13 stops along the tour and anyone could get on and off the bus at any stop, but since we paid $30 per person we were determined to ride the entire route.

It was seriously hot, about 90+ degrees.  As long as the bus was moving it was okay because of the breeze, but whenever the bus stopped along the route, we would sit and literally puddle in our seats.  Now you might be thinking, why didn’t we go downstairs and ride inside the bus – well, because the inside of the bus was like riding in a big red oven.

It was a good tour though and there was a guide on the bus so we learned a lot about the history of the city, which I enjoyed and then promptly forgot.  That portion of the tour was 2 hours and then we transferred to another bus and took what they call the Ethnic Tour. 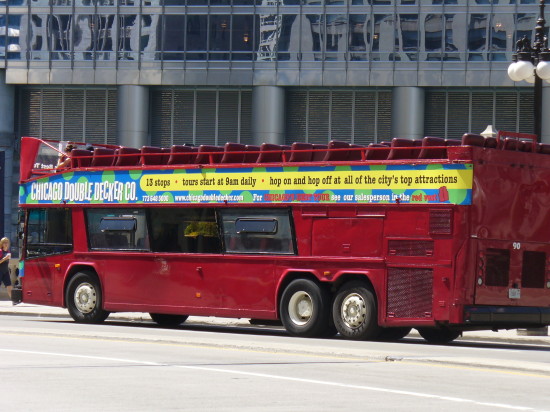 The wheels on the bus go ’round and ’round – all through the town!

The ethnic tour (interesting name, yes?) was another 1 1/2 hours and we rode through China Town, Little Italy and The Greek neighborhood.  Because we were on the last bus of the day, the bus driver stopped at Harpo Studios and we were able to get off of the bus for 10 minutes (just 10 – no more) and visit the Oprah store.  Yes – she does in fact have a store across the street from the studio.  That’s as close to Oprah as I’ll ever get! 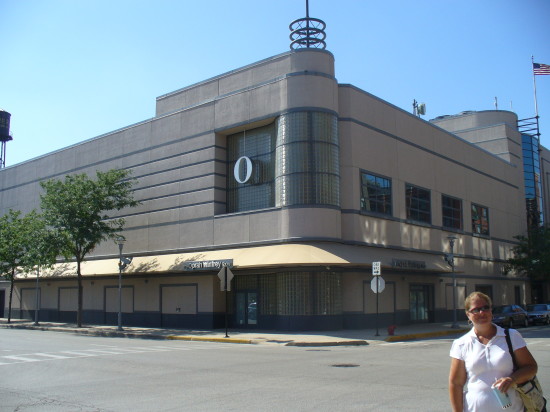 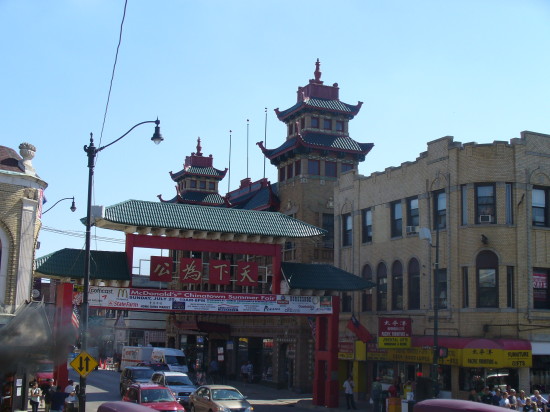 As an added perk for our $30 tickets, there were freebies offered at various stops along the route.  Since we didn’t get on/off the bus, once the tour was over we walked to the tour office in Millennium Park where we picked up our free t-shirts (which were size XXL).

Next, we walked to the theater district where we picked up our free sample of gourmet popcorn.  The popcorn smelled SO good we decided to buy a bag.  We ordered Macadamia Nut Caramel Crisp.  When the girl handed us our order she said, “That’s a large Mac and Two Trolleys.”  It was pretty funny.  We didn’t make it back to the Hershey Store though to pick up our free chocolate, (that’s twice I missed out on the Hershey Store). It would have melted anyway.

From the theater district we walked back to the hotel and very close to our hotel was Ruth’s Chris Steak House – can you say, Yum?  We have definitely eaten well in Chicago.  An after dinner stroll led us to Navy Pier where we climbed on board and took a 9:00 p.m. skyline boat tour on Lake Michigan.  The view of the city skyline, with the lights, was spectacular.  At just 30 minutes, the night tour was perfect. 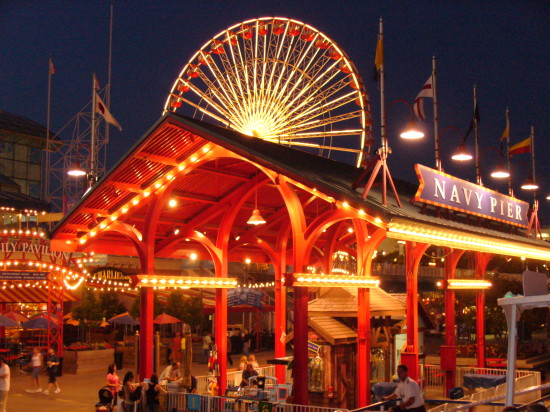 Navy Pier – so pretty at night! 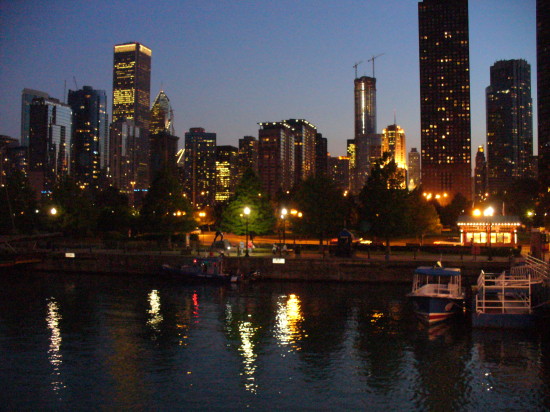 By the time we got back to the hotel I was drained.  I was probably dehydrated and really feeling the affects of the heat and humidity – remember, I’m a west coast girl, no humidity.  A quick stop to buy a quart of Gatorade, which I took down in one breath.  After a cool shower I decided I would live.

Chicago is a beautiful city.  There are fresh flowers everywhere, in huge planters along the streets and hanging flower baskets from the light posts.  We are impressed by how clean the city is.  The waterfront is beautiful.  I never thought of Chicago as a boat city, but the harbor is impressive. 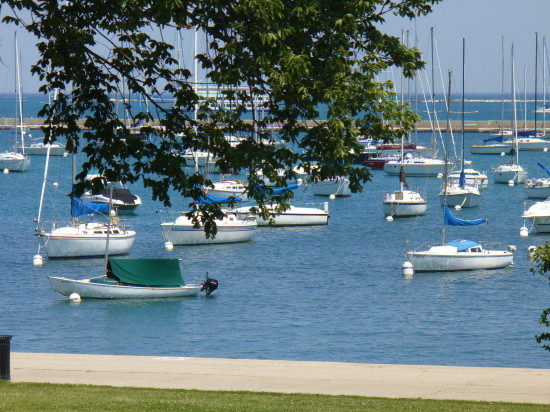 Tomorrow We Hit the Road

It’s quite a site to see.  On the river bridges there are cars driving across, boats moving under and trains passing across the top.  Abi said he wouldn’t mind living in a city such as Chicago. We figured it wouldn’t work though because he’d want to live above the 30th floor to have the best views. I wouldn’t want to live above the 3rd floor because of my fear of heights.  Good thing living in Chicago was never in the works.

Tomorrow – we hit the road! 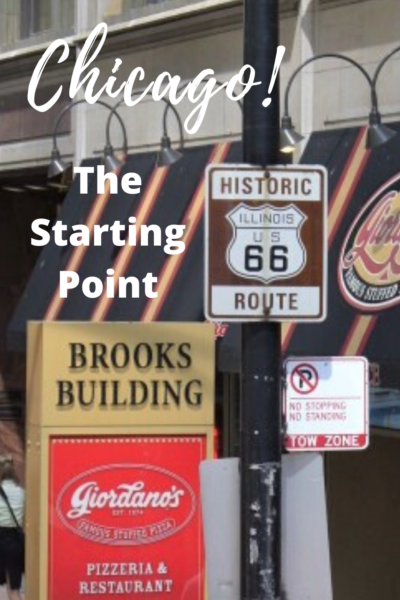