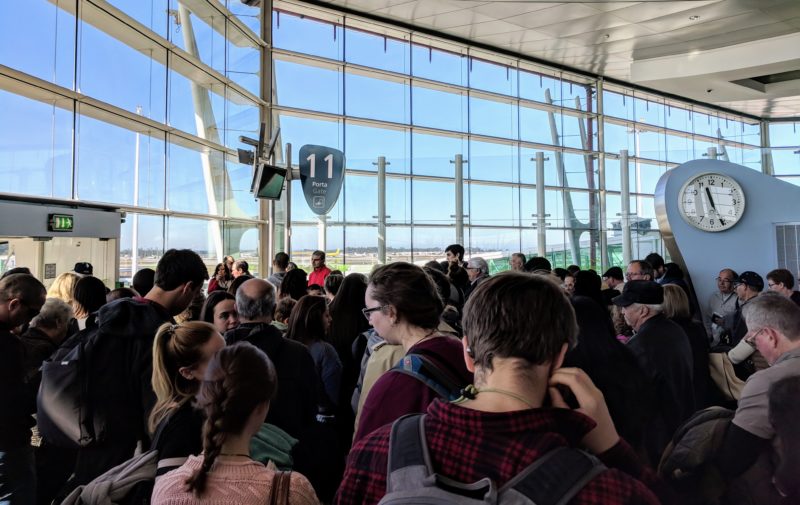 It seemed as if our flight was never going to leave Porto as we waited – and waited – to board the airplane.  Scheduled to leave at 11:30 a.m. we saw the flight crew board the plane at 10:50 a.m. and we knew there was no way.  And, 30 minutes later we were still waiting.  Finally, we taxied down the runway at 12:30 p.m. and off we flew toward the United States.  We were heading home, ahead of schedule, but for a very good reason. 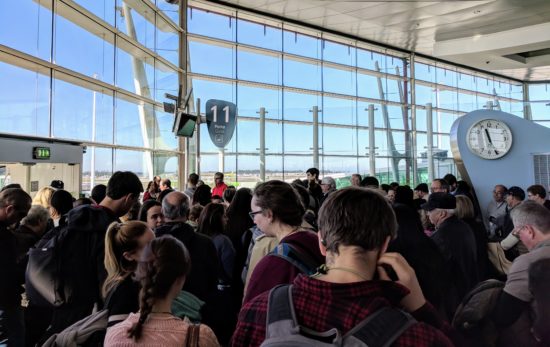 Waiting to board. Note the time on the clock on the wall. Our flight was scheduled to leave at 11:30 a.m.

You know what they say about making plans, right?  Life is what happens to you while you’re busy making other plans.  It definitely keeps life interesting though, doesn’t it?

If you’ve been following our expat experiment you know that in April 2017 we took the initial steps to begin the application process for residency in Portugal.  Our overriding goal was to best position ourselves to have a base in Portugal – and a base in the US – which would give us the flexibility to travel throughout Europe without restriction.  With our 4-month visas in hand, we flew from the United States to Lisbon, Portugal on June 29, 2017.

Our scheduled appointment (which took 4 1/2 months to get) with SEF (immigration), to obtain our residency cards, took place in mid November. It was a fairly routine appointment, of submitting paperwork, that lasted about 30 minutes. Here is the list of documents needed to apply for our 1-year renewal:

As we gathered our belongings to leave, the woman working with us told us it would be anywhere from one to three months before we received our residency cards.  We were stunned as we absolutely did not see that coming.  We have friends who received their cards two weeks after their appointment. But, lesson learned. Working with an extraordinarily busy SEF office in a large city such as Porto is prime for delays. 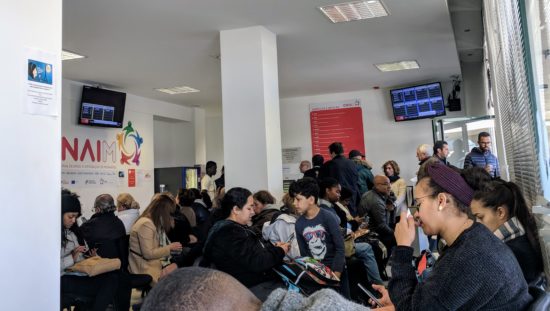 Although our appointment was scheduled for 11:00 a.m. we waited nearly 2 hours before we were called. An extremely busy SEF office in Porto lends itself to delays.

One month later, still with no residency cards in hand, we booked our flight to the United States. It was time to go home to spend Christmas with the family.

At our SEF appointment we learned that in order to have our cards mailed to our Porto address, the envelope would have to be signed for upon delivery, which wasn’t possible since we would no longer be in Porto.  The only other option was to pick up our cards at the SEF office.  But, because we really didn’t know when they would be ready for pick up, we knew it wasn’t a viable option because again, we would no longer be in Porto.

It Took a Bit of Juggling

We learned, however, that we could authorize someone to pick up the cards for us, which meant learning how to navigate the Portuguese system.  In order to make it happen, we had to write a simple letter of declaration giving our friend permission to pick up our cards.  And, it came as no surprise that the letter had to be notarized at a cost of 24€.

Once our applications are processed, SEF will send a letter of notification to our Porto apartment.  I know, you’re thinking… but they won’t be there.  Our very kind Porto apartment neighbor has agreed to watch for the letter to arrive in the mail, and then he will mail said letter to our friend.  And, once our friend receives the letter, she will pick up our cards from SEF.  Are you completely lost at this point?  Um… so were we.  It definitely took a bit of juggling.   We are so thankful for the good and kind friends who barely know us, but were so willing to help.

When we left the US on June 29, 2017 it was with the loosely planned idea of traveling for a minimum of one year.  If you’ve been following our journey you know that we traveled with Eurail for 8 weeks before spending time in Malaga, Spain and then settling in to daily life in Porto for three months while we went through the residency process.

In theory, after living in Porto for three months, and with our newly acquired residency cards in hand, we had planned to travel to Italy and Greece and then in the spring plot a northern course through England, Ireland, Scotland and wherever else the wind blew us.

When the Phone Rings

Nothing was written in concrete, no tickets had been purchased, it was all just loosely planned.  So, when the phone rang and we received the news that would completely change the course of our lives, we did a little dance of joy and we threw said plans right out the window.  Portugal, Italy and Greece will always be there, but meeting our soon-to-be-born grandson comes once in a lifetime.

So, here we are back in the US and once again redefining retirement as we embrace this next chapter filled with a new life, a new home and new travel adventures on the road.  It’s going to be epic!