Christmas Lights & Home for the Holidays 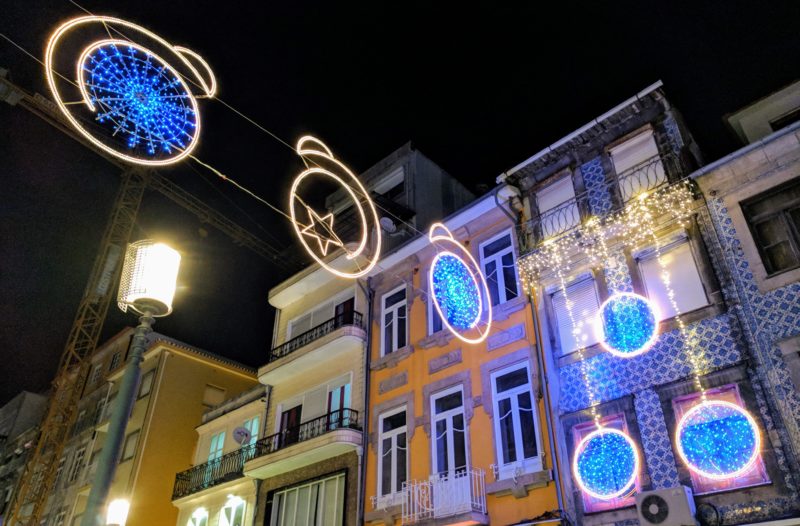 I don’t know that we’ve ever seen a city more decked out with Christmas lights than we have here in Porto.  We spent three days in Santiago de Compostela and the city was definitely illuminated, but nothing like what’s on display in Porto.

Throughout the month of November we watched as crews hung displays of Christmas lights throughout the city.  It seemed as if every time we stepped outside to explore a new neighborhood, we’d find a crew.  We concluded the city must have multiple huge storage locations to house all of the lights.  And, we had many silly conversations about how if one tiny bulb is fried the whole string of lights doesn’t work and what that would mean on the scale of decorating an entire city.  Can you imagine? 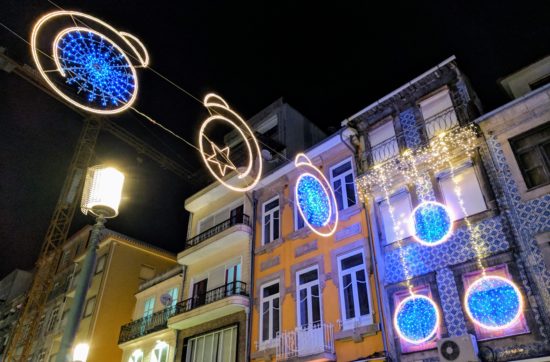 We watched as the crews set up a giant Christmas tree made of metal framing and a gazillion twinkle lights in Liberty Square.  Not being able to read the Portuguese signage, we didn’t know what all was going to happen on December 1, but we found the starting time of what we believed would be the flipping of the switch on the Christmas tree.  Ha!  It was so much more. 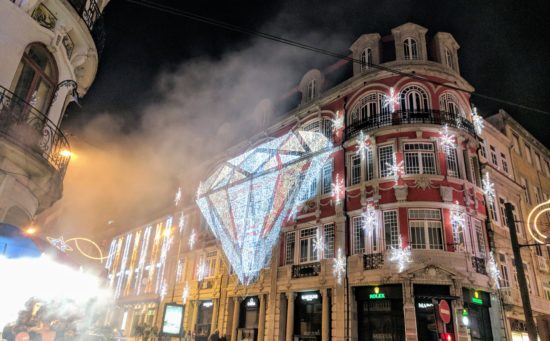 A light display along Santa Catalina and the smoke from a chestnut roaster.

It seemed as if every person who lives in Porto was out and about on the night of the first.  Liberty Square was packed with people and the nearby neighborhood sidewalks were lined with families window shopping and browsing in stores. The smoke from the fires of the corner chestnut roasters swirled through the air and of course the kids were beyond excited. Let me tell you, Porto knows how to ring in the Christmas season. It all made for a magical night.

Home for the Holidays

As life would have it though, we won’t be in Porto for the big day – Christmas Day. We’re flying home for the holidays! You know the old saying time flies?  Well, it flies pretty damn quickly these days.  Amazingly, we’ve been in Europe for six months and what a whirlwind of adventure its been.

We have OH so many more stories to tell, many exciting new roads to travel and we’ll soon share an update on our Portugal Expat Experiment. And, there will be an upcoming unveiling or two. For now though, we’re going home to hug those we love most in the world and to be with them as we welcome and embrace 2018.

Our wish for all of you is that you find peace and joy in the moment. 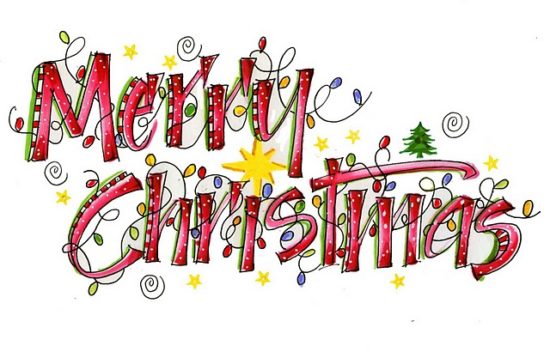