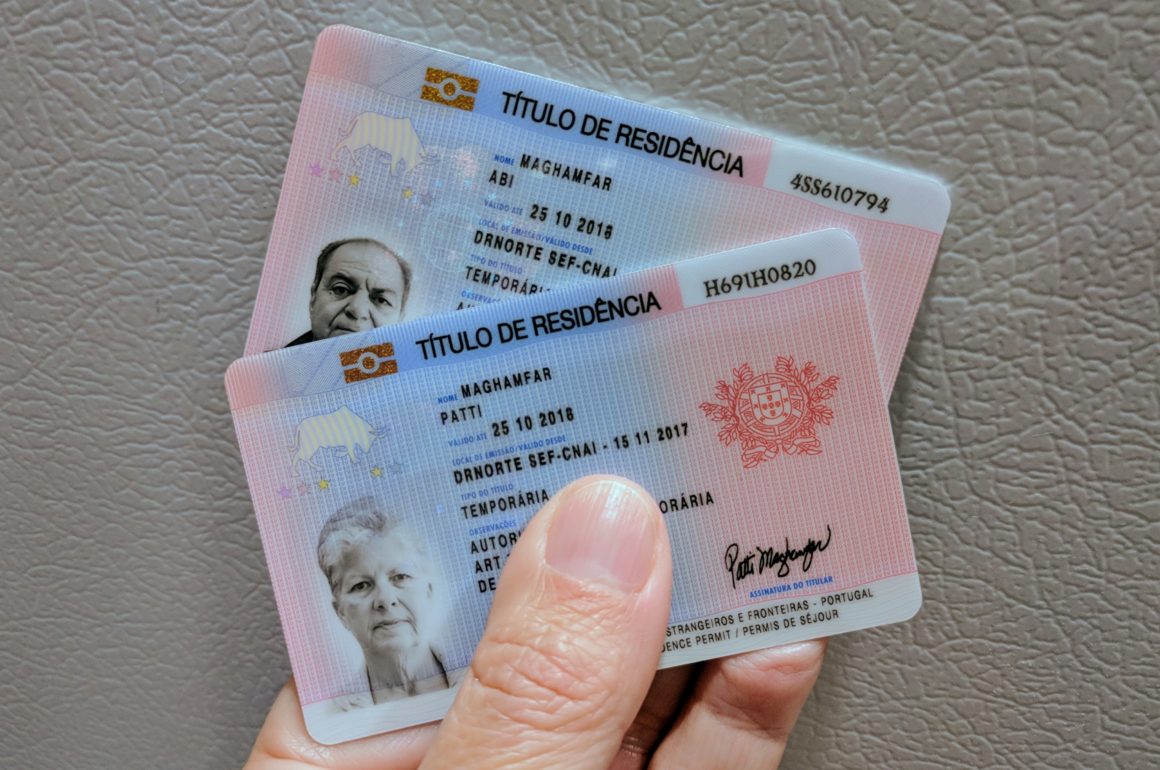 Once upon a time (because all good stories start with these four words) two Portuguese residency permits found their way to the United States, here’s their tale.

The quest to glean our Portuguese residency permits began in February 2017.  Actually, as I write this I can’t believe how much has happened in such a relatively short period of time.  In February, I made a call to the office of the Portugal Embassy in Washington, DC to book an appointment.  A stack of paperwork later, multiple emails to our friends the Portugal expat gurus at No Particular Place to Go, and zip, bang, whiz, fast forward to a successful April appointment and six weeks later we had ourselves two 4-month visas.  Two days later we were on the red-eye flight to Lisbon.

Here’s the list of documents we each needed to submit in order to apply for a 4-month residency visa.

From Lisbon We Hit the Rails

From Lisbon we hit the rails and traveled through Europe for three fast-paced and completely amazing months.  And, by late September we had settled and unpacked our bags in Porto.  We spent the next three months exploring and eating our way around the city while waiting for our immigration (SEF) appointment scheduled for mid November. 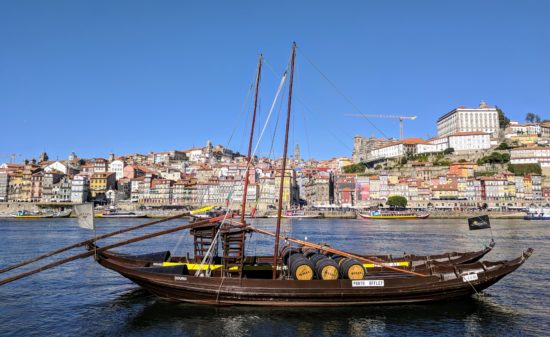 Porto on the Douro River.

Because we had to book our appointment well in advance of arriving in Porto, we hired an attorney to book the appointment for us, and he secured our fiscal id numbers for us.  Otherwise, we did everything on our own.  In actuality, our 4-month visas expired at the end of October, but as long as we didn’t leave Portugal, we were golden.

Here’s the list of documents we each needed to submit in order to apply for our 1-year residency permits.

The SEF office in Porto is one busy portal of immigration busyness.  Whew.  Our appointment was scheduled for 11:00 a.m., but it was 1:00 p.m. when we sat down with the official.  Sign here, sign there, prove this, prove that, don’t smile for the camera, hand over the cash, stamp, stamp, completo.  Our application packages were systematically added to the pile awaiting approval from the powers-to-be.  As we stood to go, we asked how long it would take for our applications to be approved.  When she replied up to three months our jaws nearly hit the floor.  We weren’t ready for that answer. 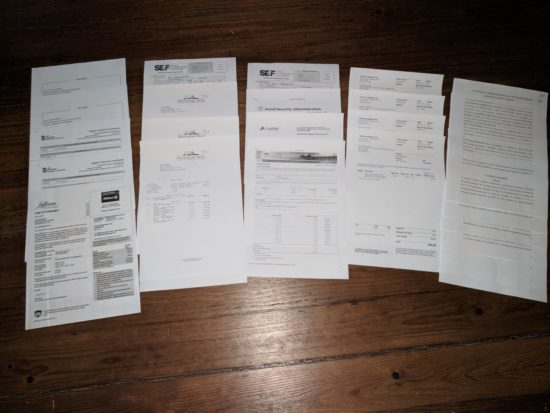 Our application documents for our 1-year residency permits.

If you’ve been with us for a while you may remember that while living in Porto we received a phone call.  A phone call that would change the trajectory of our path.  But, isn’t embracing change what life is all about?  It certainly keeps it interesting. There are certain events in life that qualify as life changing.  The soon-to-be birth of a child – a grandchild – is definitely one of those events and definitely a game changer.

We Weren’t Ready for that Answer

It would take up to three months for our application package to be approved.  There we stood with our jaws hanging open as we prepared to leave SEF.  We had maybe three minutes to wrap our heads around the big picture and come up with a game plan.  Having the permits mailed to our Porto apartment was not an option because we’d be back in the US by the end of December, so we couldn’t gamble on them arriving in time.  Fortunately, we thought to ask if someone could pick them up for us.  Yes, that was an option, but we had to have a notarized statement giving permission to a designated person.  So, we chose to be notified by mail when our permits were ready to pick up.  Beyond that, we had no idea.

Think.  Think.  Think.  Do we scrap the whole idea?  Do we try to figure out how to get the permits?  Who could pick them up for us?  Will they end up in the dead pile in some dusty corner of the SEF office?  After much thought and a lot of soul-searching, we asked for help. Through the kindness of people who barely knew us, we lined up a game plan for getting the permits to the US.

With the game plan in place, on December 21 we said, “Nos voltaremos” to our beloved Porto and flew back to the US.

Life Back in the US

Life back in the US took hold immediately and we barely had time to notice the passing days.  Sometimes when you don’t have time to think beyond today, time flies.  Two weeks ago we received word that the letters of notification had arrived in the mail at our (former) Porto apartment.  It had been 2 1/2 months since our SEF appointment.

When I think of what our friend did next to help us, it fills my heart with such gratitude.  She met with our apartment neighbor and he handed her our letters.  She then took said letters, along with our notarized statement and copies of our US passports to the SEF office and picked up our permits, photographed them and messaged me, “Got them!”  Five days later we had them in our hands.  If not for the kindness of friends… 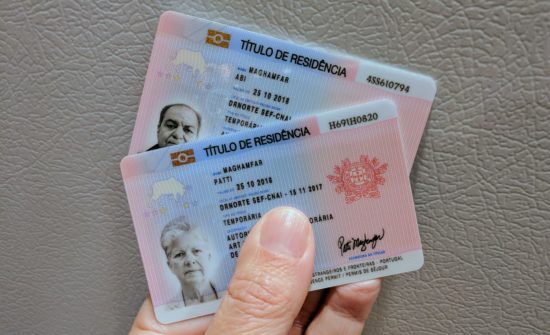 Our Portuguese Residency Permits in my hand with two dreadful mugshots.

Being half Portuguese, my mother’s family roots are in Portugal, I find it quite fitting that in this stage of my life I am a temporary resident of Portugal.  How many of us get to say that?  Or, I suppose, even want to say it?  It’s an accomplishment for us to embrace a new chapter in our lives and from here forward, the possibilities are endless.

And, that my friends, is the tale of  how two Portuguese Residency Permits found their way to the US. 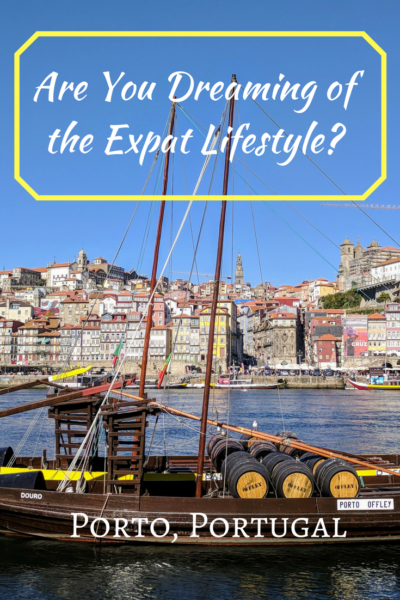 « Previous post
Porto Locals: Jorge from Garrafeira do Carmo
Next post »
How to Spend Ten Lazy Days in Malaga