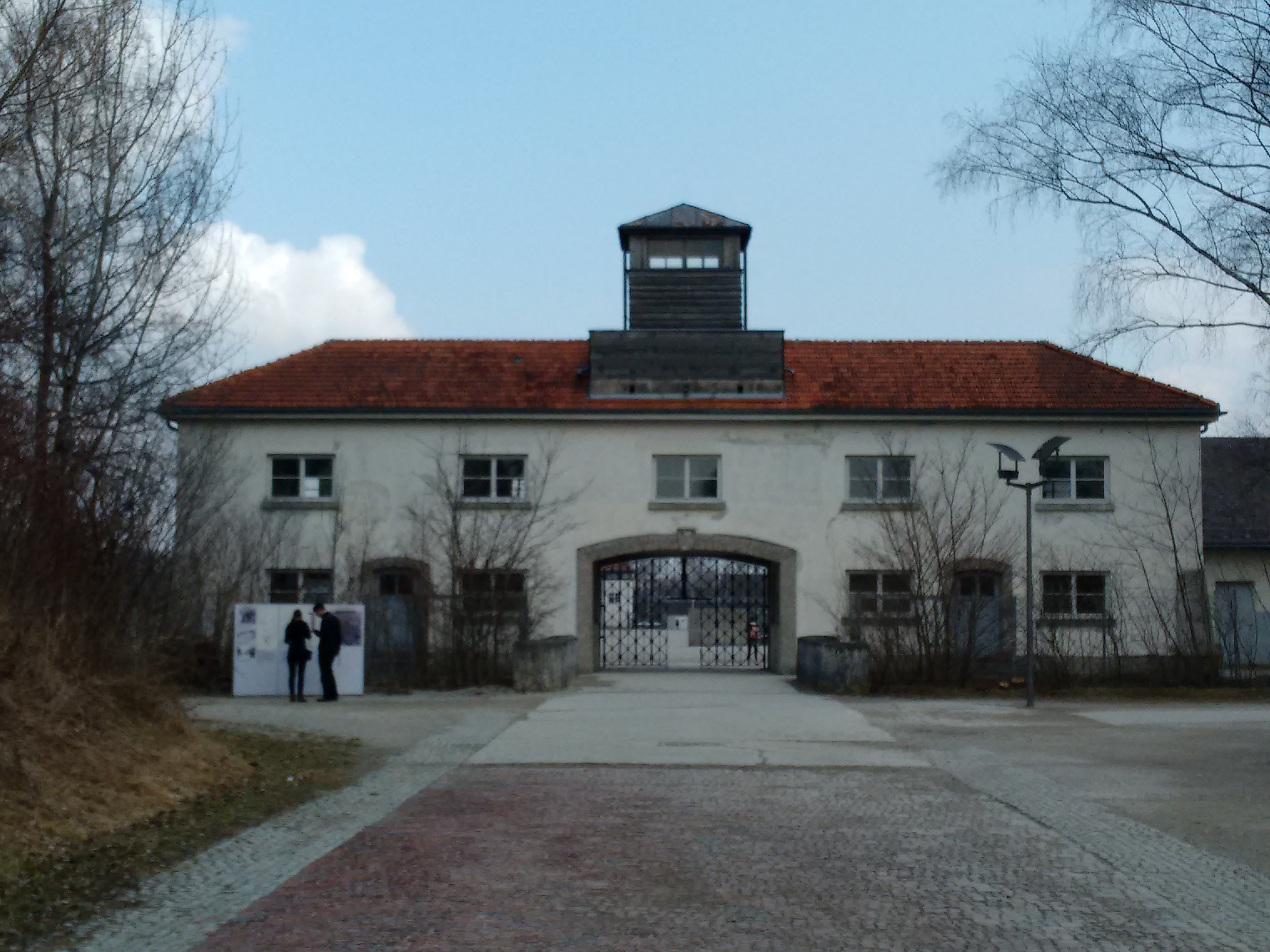 These are the words emblazoned over the entrance gate to Dachau Concentration Camp – the model for all camps. 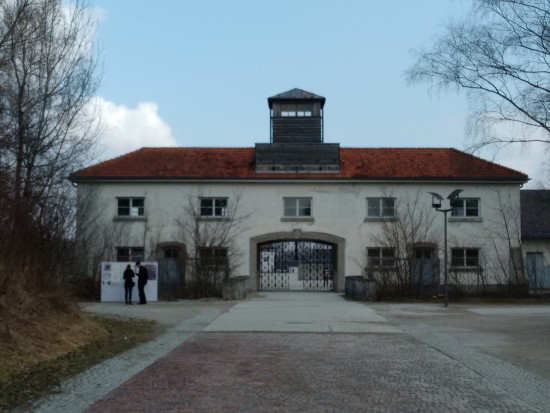 The entrance gate at Dachau.

I cannot put into words the extraordinary experience of visiting a concentration camp, such as Dachau.  The only thing I can liken it to was our visit to the Holocaust Museum, in Washington, D.C.  Visiting a museum is of course vastly different than walking the grounds of an actual concentration camp, but it took me weeks to recover from our time spent at the museum.

Tough lessons such as these are powerful and I think it’s something everyone needs to experience if at all possible.  I truly believe we cannot move forward if we don’t understand, and hopefully learn from, the past.

We wanted to see/learn as much as possible on our visit to Dachau so we opted to take a small group tour.  It was so small that it was actually just the two of us and our guide.  We took the local train from Munich together.  While touring, another English-speaking couple asked if they could join us.  It all worked out well. 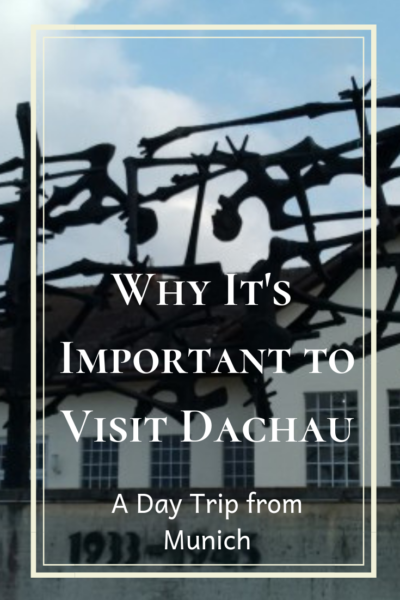 Trying to remember all that we took in is nearly impossible. The experience will stay with us for a lifetime in the same way certain exhibits at the museum will never leave my mind’s eye. Struggling to find the words, I thought it best to let the photos tell the story.

Located outside of Munich, Dachau was a munitions factory converted to a prison camp just weeks after Hitler became Reich Chancellor. Initially, it was a prison camp for German political prisoners and members of the clergy who spoke out against the Nazi regime. As the years passed, more groups were imprisoned such as the Roma Gypsies, Jehovah Witness and homosexuals. As the persecution of Jews grew, Jewish men were brought to Dachau. 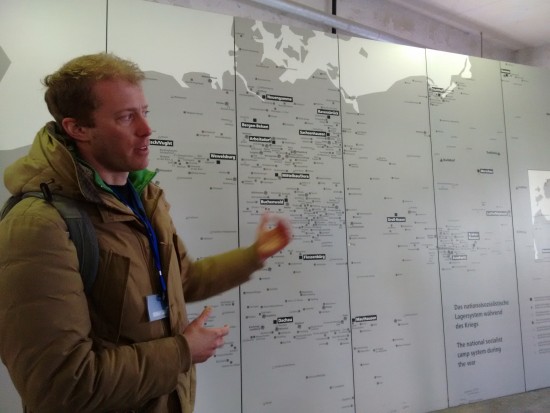 Our guide, Jon, showing us a powerful image of the vast number of camps throughout Europe. Each word/shape you see represents a camp.

Dachau was a training camp for young impressionable men recruited into the SS.  The men were broken down and brainwashed in order to carry out the duties of the job. The job. Many SS who were captured after the war justified their actions by declaring they were just doing their job.

In the photo below, look closely and let your eyes see the bare wood rectangles inside each arch.  Across the span of each arch, there was a solid wood beam with iron hooks.  As punishment, the prisoners were chained by their wrists and hung on the hooks – with their arms above their heads – for a minimum of one hour.

As each prisoner arrived he was taken to the showers and all body hair was shaved.  It was all about humiliation and breaking the human spirit. 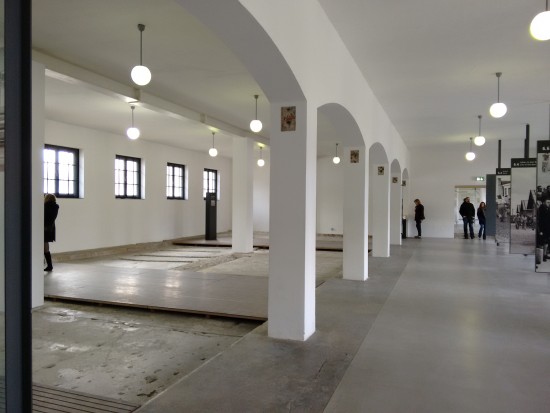 The shower room.  The showers were on the left side of the hall.

Inside the shower room was also this… 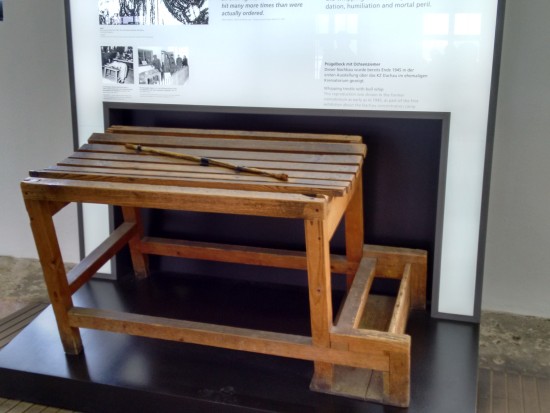 I think this image speaks for itself.  Prisoners were required to count to 25.  Many of them did not speak German, so if they couldn’t count correctly, the beating would start over. (This is a replica.) 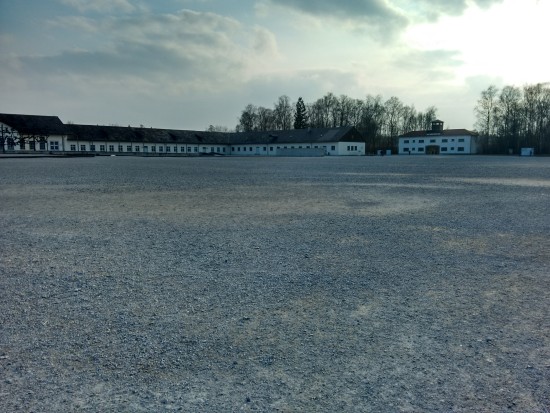 The vast open roll call yard where prisoners were made to stand at inspection for 1 hour in the morning and 1 hour in the evening in all weather.  The building to the left  housed the admitting rooms for the prisoners, the shower room, the kitchens and the laundry.  Each prisoner was given 1 uniform, which looked like striped pajamas, a cap and a pair of slippers with wooden soles. 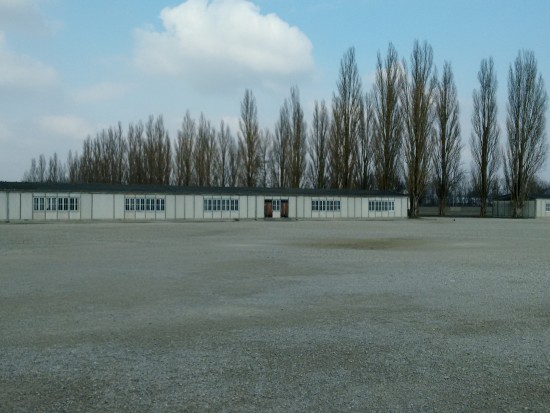 A replica of a barrack. 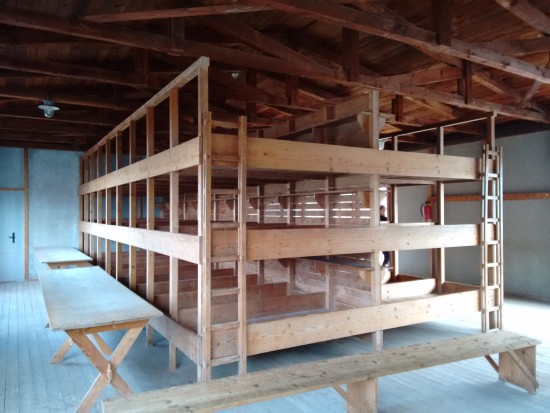 A replica of the sleeping cots inside the barracks. This is phase 1 the early years of the camp. Notice there is room for a table and benches. 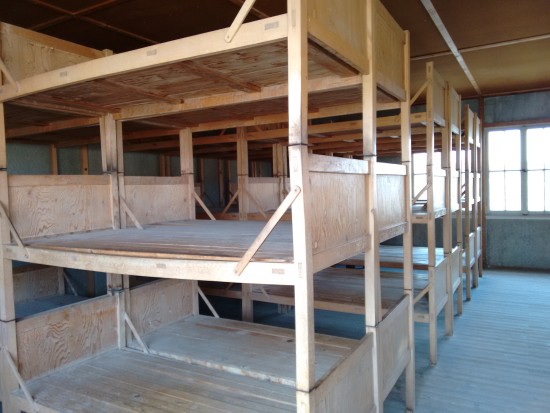 Another number that will stay with me forever is the number 500.  In phase 3 of the camp, 500 men slept in this room.  It is the same size room as pictured above in phase 1. 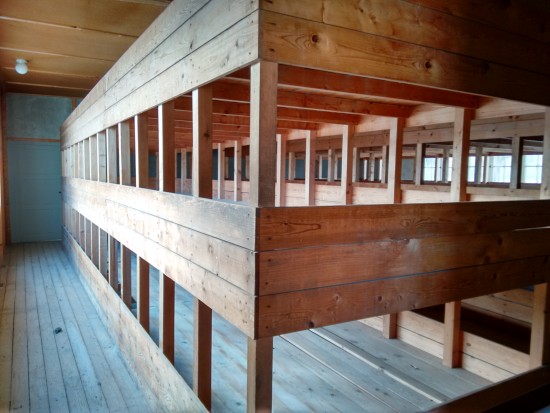 500 men slept in this room. It’s an image that will never leave me. 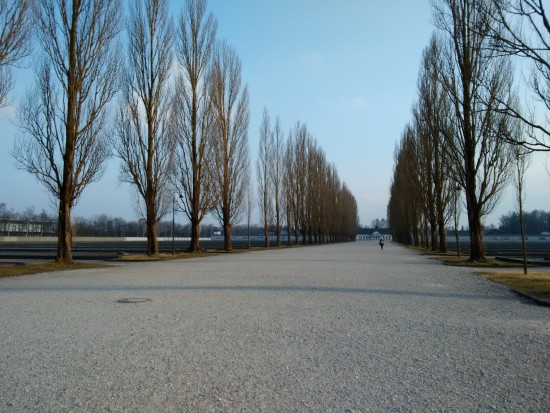 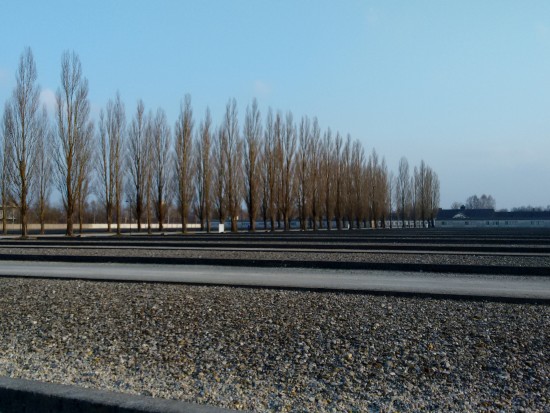 Foundations mark the placement of the barracks. 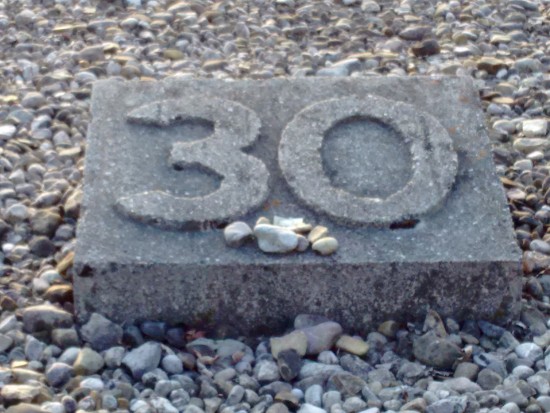 Marks the placement of Barrack 30.

Why remember Dachau?  Because Dachau was the first; it was the model of organization and routine for all camps. Dachau was the training camp for SS soldiers. Dachau was a forced labor camp and many prisoners were literally worked to death.

“The number of prisoners incarcerated in Dachau between 1933 and 1945 exceeded 188,000. The number of prisoners who died in the camp and the subcamps between January 1940 and May 1945 was at least 28,000, to which must be added those who perished there between 1933 and the end of 1939, as well as an uncounted number of unregistered prisoners. It is unlikely that the total number of victims who died in Dachau will ever be known.”  The United State Holocaust Memorial Museum 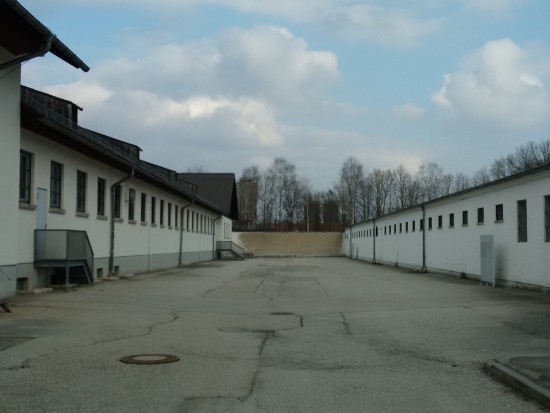 The building on the right was the bunker. It was the prison inside the prison. 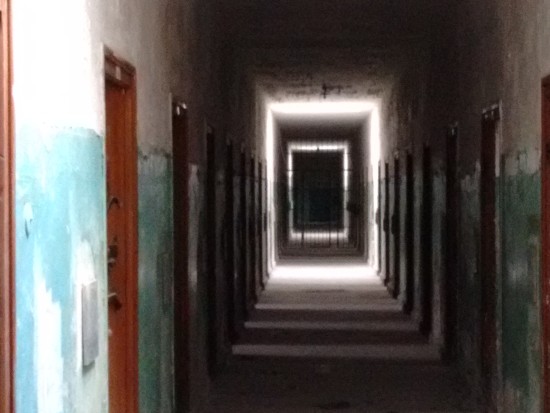 This was especially difficult to witness – the bunker. Pure evil. Pure hell.

A Day at Dachau

There was more, so much more.  We were at the camp for nearly 5 hours, but I’m thinking you’ve seen enough.  As odd as it sounds, I see our visit to Dachau as a gift.  We gave ourselves the gift of knowledge and there is no book learning that can compare to walking in the path of those who walked before us.  It is critical for us to remember, to  witness and to share the knowledge.

I’m going to leave you with this photo of the Carmelite Convent which sits adjacent to Dachau.  The order of the convent serves to bring peace to places where unspeakable deeds were committed.  To reconsecrate the ground. 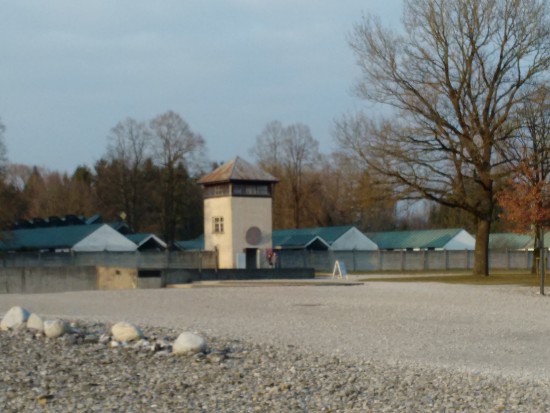 The entrance to the convent grounds is through a former guard tower.

To learn more about Dachau you can visit the United States Holocaust Memorial Museum.

Although you can tour the Dachau Memorial on your own, as I mentioned we chose to go with a guide. Thank you, Jon, for your insightful and articulate tour.  Visiting the memorial with a guide was the right choice for us and if you find yourself in Munich, I encourage you to visit Dachau.  Take a walk in the path of those who walked before us and bear witness.

« Previous post
Prague, It’s The Stuff Fairy Tales Are Made Of
Next post »
It’s Known as The Bone Church