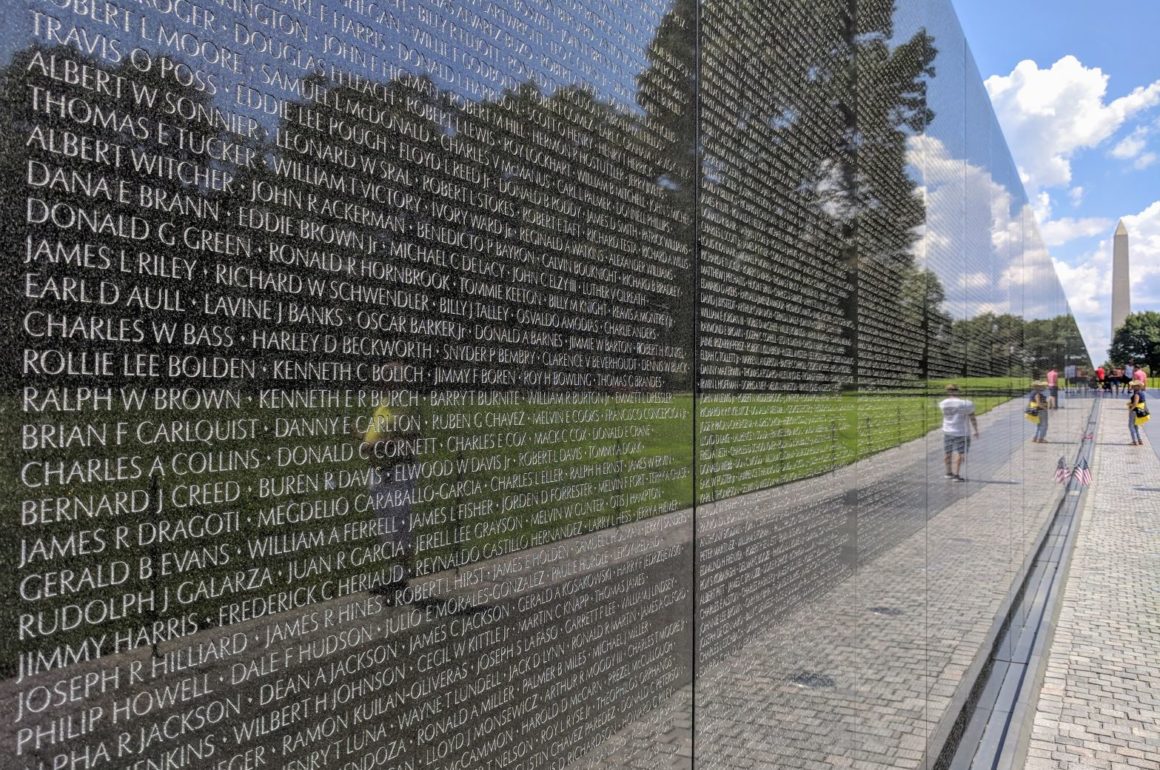 Most likely, anyone who has visited Washington, DC and walked the National Mall, has picked a favorite or two among the national monuments. Here is our list, in no particular order of favoritism, of a few of our go-to national monuments when we play tour guides. Each monument is beautiful in its own right, and each one is synonymous with a visit to Washington, DC.

The Washington Monument is probably the most recognizable, along with the Lincoln Memorial. When we’re out and about, we try to find different perspectives, such as this shot we captured from the far side of the tidal basin.

Beating Out the Eiffel Tower

George Washington died (1799) long before the start of construction (1848). The monument endured its share of historical drama when construction was actually halted for nearly two decades. The year 1884 saw the completion of construction and the monument was dedicated the following year. It stands at 555′ tall and at the time, it was the world’s tallest structure beating out the Eiffel Tower.

The interior stairs are closed to the public (who would want to climb 896 stairs?) but there is an elevator. There are a lot of little known facts about the monument which you can read here. Do you know why the bottom portion of the monument is different in color than the upper portion?

There have been many a day when we’ve seen elderly veterans spending time, in reflection, at the memorial. It won’t be too much longer before veterans who served in WWII will no longer be with us. The stories they can tell if someone takes the time to listen.

One of the things I find most impressive at the monument is the water features. What is it about fountains that draw us in and somehow soothe us?

At first glance you might see the memorial and the fountains and think, oh, that’s pretty and move on. Don’t leave too quickly though, take the time to read the inscriptions on the wall, they’re actually nicely detailed. There are 56 pillars that represent each state and territory, along with gold stars that represent those who gave their lives in service, as well as the Pacific and Atlantic arches.

Completed and dedicated in 2004 the World War II Memorial offers visitors a place of peaceful beauty and should not be missed. You can find the WWII Memorial just about half way between the Washington Monument and the Lincoln Monument.

Dedicated in 1982, the Vietnam Veterans Memorial is by far the most powerfully moving memorial on the national mall. Engraved with 58,318 names (as of 2017) the wall is dedicated to those who gave their lives in service. The brilliance of the memorial is in the simplicity.

There are several books, near the wall, with the names of veterans listed chronologically, by the date of casualty, which makes it easier for those looking for a specific name. Visitors to the memorial often shade the name of a loved one with pencil and paper, and/or leave a small token of love such as a flower. It’s incredibly moving to visit the wall.

The FDR Memorial, which was dedicated in 1997, is a bit off the national mall, (see map above) but it is definitely well-worth seeing. What we enjoy about the FDR memorial is how the story of his presidency unfolds through a series of sculpture scenes. The memorial is spread out which allows visitors to stroll through his presidency.

The only president in US history to do so, FDR served three terms in office. He actually won a fourth term but died within months of the start of it. Best known for leading the country through the Great Depression and World War II, FDR’s most well-known quotations are engraved in the walls of the memorial.

You can stand on the stairs of the Lincoln Memorial and look out past the reflection pool, the Washington monument and gaze upon the capitol building. The design of the national mall is brilliant.

Abraham Lincoln’s Gettysburg Address begins as follows: “Four score and seven years ago our fathers brought forth on this continent a new nation, conceived in Liberty, and dedicated to the proposition that all men are created equated…”

I’m not sure there’s ever been a speech so associated with a president, as Lincoln is to the Gettysburg Address.

Completed in 1922, the memorial itself has 36 columns each standing 44′ tall. Thirty-six represents the number of states in the union at the time of Lincoln’s death. Being the lover of history that I am, each time we visit the memorial I can’t help but wonder what Lincoln would have accomplished had he not been assassinated.

There are many more monuments and memorials to share, but in order not to overwhelm you, I think there should be a part two post. More national monuments to highlight would include the Korean War Memorial, the MLK Memorial, the Jefferson Memorial, the US Marine Corp Memorial and the Tomb of the Unknown Soldier at Arlington Cemetery, to name just a few.

Here’s a tip. A moonlight tour is also a lovely way to take in the monuments when next you visit Washington, DC. And, just like all of the Smithsonian Museums, the national monuments are free.

So, did you figure out why the Washington Monument is two-toned?

« Previous post
Norooz, The Persian New Year
Next post »
I Have a Thing About Taking Pictures of Signs