Take a Walk on The National Mall 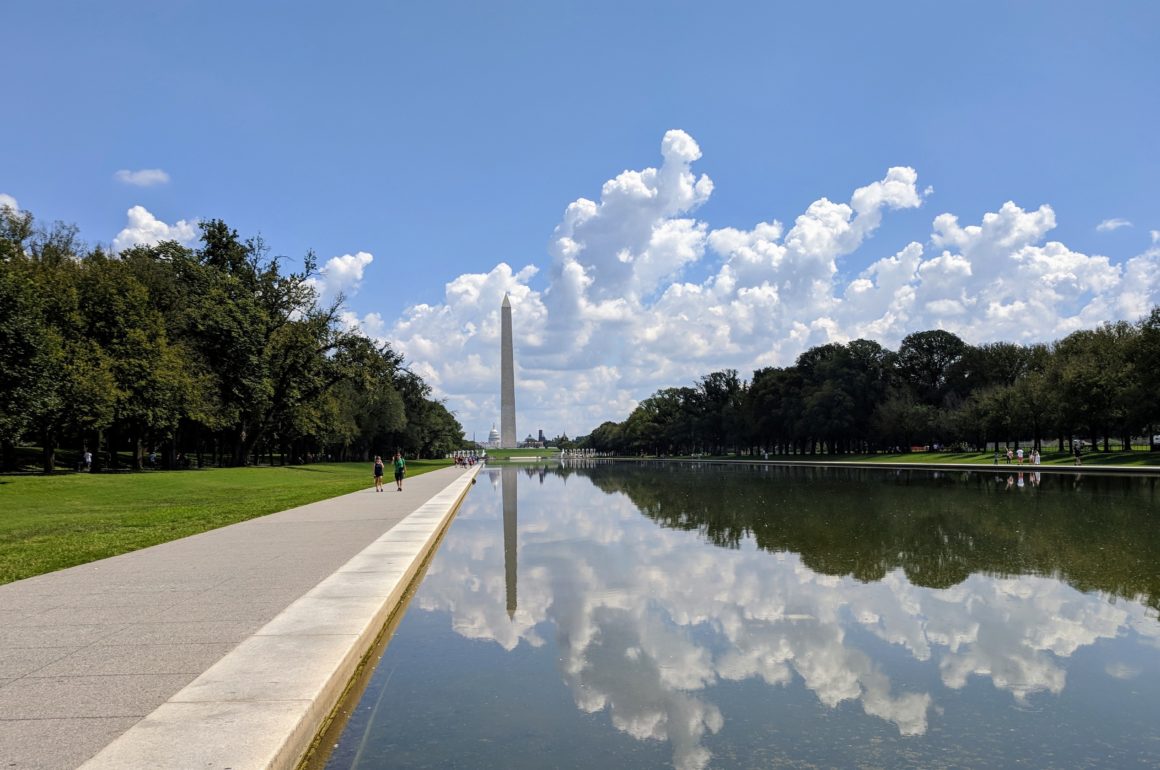 A Game of Pall Mall

A bit of historical reference as to how the National Mall got its name.  As I understand it, a game of pall-mall was somewhat similar to the lawn game of croquet.  The term mall was also referred to as public grounds, as in a large lawn area.  Eventually, the park became known as the National Mall.  Today, under the jurisdiction of the National Park Service, you won’t see games of croquet and there are no permitted picnic areas, nor is alcohol allowed.  Feel free though to bring a sack lunch or buy a meal from the multitude of food trucks that line the avenues.

For the purpose of our self-guided walk, we’re going to start at Union Station.  Trains, Metro trains and buses all arrive at, and depart from, Union Station.  It is the transportation hub of the city.  When you step out the main doors, of the station, you’ll have a direct view of the capitol building dome. 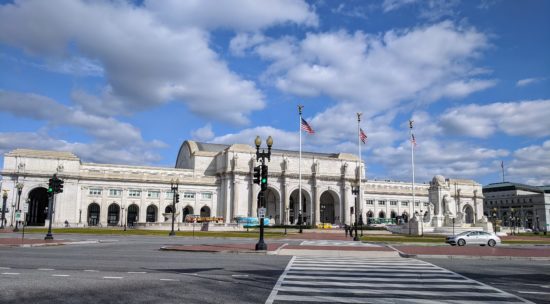 We’re also going to make use of a terrific map produced by the DC Circulator Bus line, which is super easy to follow.  It also gives you the full layout view of the National Mall, as well as the Tidal Basin.  The Tidal Basin is surrounded by the beautiful Cherry Trees that blossom each spring.  The annual Cherry Blossom Festival attracts over 1.5 million visitors.  It’s really quite special to see the blossoms.  Timing is everything though. 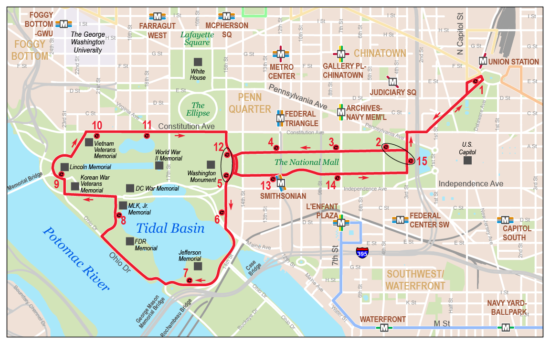 When walking the national mall it’s easy to always know where you are.  Just keep in mind that the Lincoln Memorial is on the western end of the mall and the capitol building is on the eastern end.  Easy peasy.  You can’t get lost.  One of the best things about Washington, DC is that it is laid out in a grid pattern, making it easy to navigate.

Smithsonians on the National Mall

From Union Station we follow the map and make our way to Constitution Avenue, with the Lincoln Memorial at the far end of our line of vision.  The National Mall is lined with Smithsonian Museums, such as the National Museum of Art, all of which are free to visitors.  It’s easy to get sidetracked so make note of where they are on the map, for a return visit, and keep on walking. 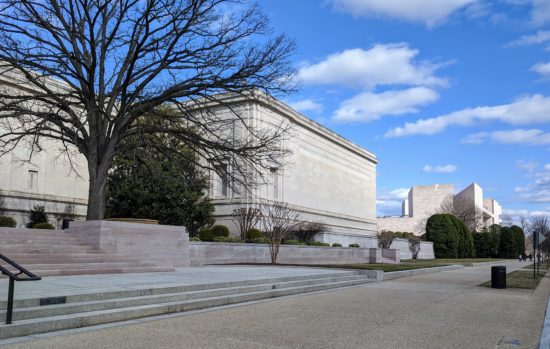 I liken a walk on the National Mall to a ride on a hop on/off bus.  Take the entire walk first and familiarize yourself with the layout, and then return to specific destinations.  If one’s feet grow weary, one can catch the Circulator bus, or one of the city’s hop on/off buses.

As you make your way toward the Lincoln Memorial, depending on the weather, you’ll see the National Mall is the city’s park.  Benches line the gravel path where one can sit and watch the world go by.  Friends toss a frisbee back and forth and children happily ride the carousel.  There’s always something going on. 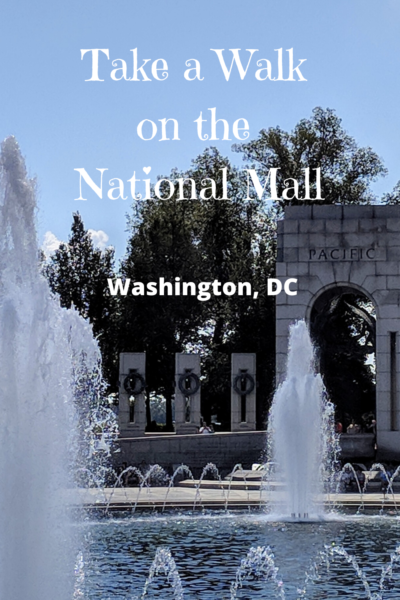 Of course you’re going to walk right by the Washington Monument.  It’s an impressive site surrounded by a ring of flags moving gracefully with the breeze.  Visitors can ride an elevator to the top of the monument to take in the views.  Tickets are free unless reserved in advance, and even then they are only $1.50.  Tickets can be purchased at the small white building near (in front of) the monument.

“Truth will ultimately prevail where there is pains to bring it to light.”  George Washington 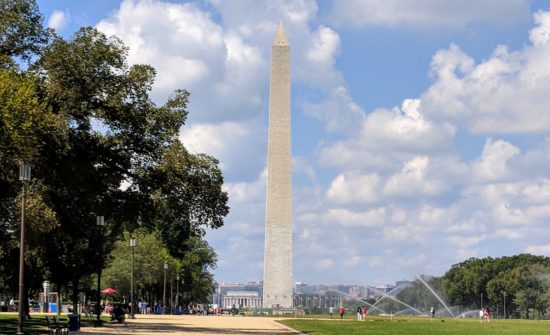 The Washington Monument on the National Mall.

From the Washington Monument, we’re going to turn left along 14th Street toward 7th Street as we make our way to the Tidal Basin.  Although it’s most commonly known as the home of the Cherry Blossoms, the Tidal Basin was actually constructed as a flood control project.  Along with the Cherry Trees, the Tidal Basin is home to the Jefferson Memorial and the Martin Luther King Memorial.  Whether the blossoms are in bloom or not, a walk around the Tidal Basin is always nice.  If the weather is just right, take a break and rent a paddle boat to take out on the water. 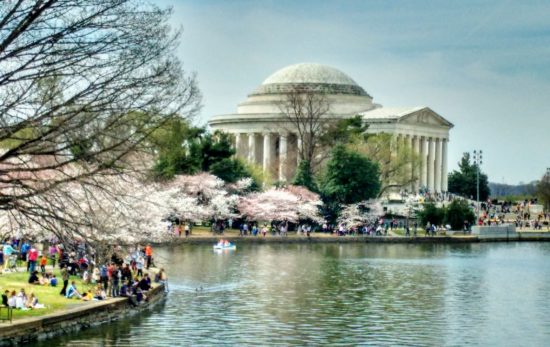 The Jefferson Memorial and Cherry Blossoms line the Tidal Basin.

Leaving the Tidal Basin, follow the route on our map and walk along Ohio Avenue with the Lincoln Memorial in sight.  Take a few minutes to climb the stairs and get up close and personal with President Lincoln.  Then turn around and look out over the distance.  Let your eyes follow the line of the reflecting pool to the Washington Monument and the capitol dome in the distance.  It’s really quite special.

Near the Lincoln Memorial you’ll find several monuments including the Korean War Memorial and the Vietnam War Memorial. 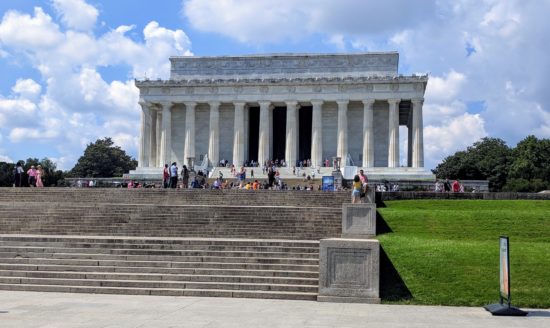 Climb the stairs and get up close and personal with President Lincoln.

After leaving Mr. Lincoln begin walking east, along Constitution Avenue, with the capitol dome in the distance.  This is a particularly lovely section of the walk as it is lined with shade trees and follows alongside the reflection pool. 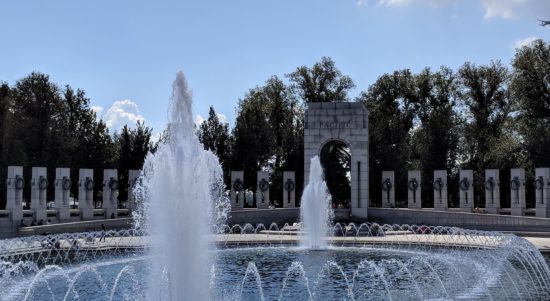 The fountains at the World War II Memorial.

At 17th Street and Constitution Avenue, you can stop to take in the beautiful fountains of the World War II Memorial.  The Memorial was completed in 2004.  It pays tribute to those who served in all branches of the armed forces during World War II.

After viewing the fountains, walk to 15th Street where you’ll turn right and walk toward Independence Avenue.  Turn left at Independence and continue walking east while keeping the iconic red brick Smithsonian Castle Visitors Center on your right.  Tip:  There is a Metro stop near the Smithsonian Castle, if you just can’t walk another step. 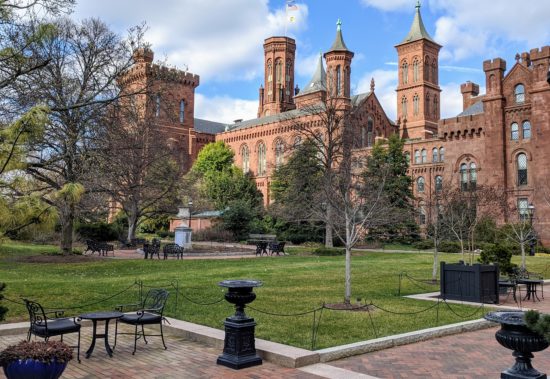 The history of the establishment of the Smithsonian Institution is a bit of a mystery.  As quoted in WashingtonDC.org

Whatever the reason, The Smithsonian Institution is a gift to not only the people of the US, but also to visitors from around the world offering incredible museum exhibits at no charge.

There are several museums and galleries that line the mall along Independence Avenue, including the Air & Space Museum, the Freer Gallery, the Sackler Gallery and the Botanic Gardens.  All of them are well-worth visiting. 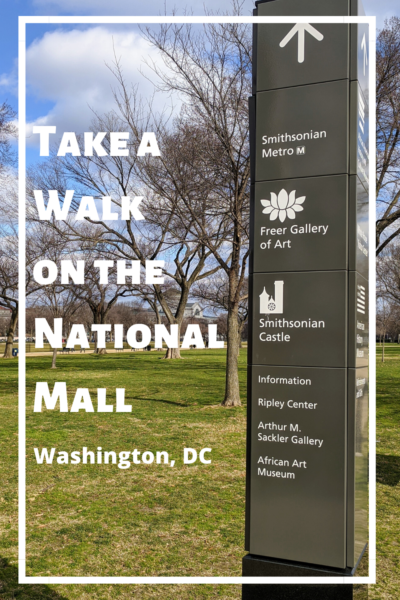 At Independence and 3rd Street, you’ll walk back across the National Mall.  It’s a good spot to stop and take in the capitol building.  Behind the building is the visitors center where one can take a free tour of the capitol.  It’s a very good tour. Depending on the time of year it can be exceptionally busy and waiting in line is the norm.  Especially in the spring with the annual invasion of eighth grade students who visit Washington, DC as part of their school curriculum.  Just behind the Capitol is the Supreme Court and the Library of Congress, both of which are free to visit and should not be missed. 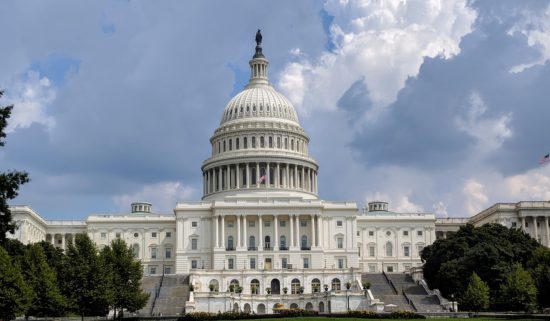 The US Capitol Building. No matter the turmoil inside, it’s a majestic building.

Thanks for Taking a Walk With Us

As you can see from the capitol building at Independence and 3rd Street, it’s just a hop, skip and a jump back to Union Station.  If you’ve made it this far, thanks for taking a walk with us on the National Mall and around the Tidal Basin.  It’s one of our favorite ways to spend a day. 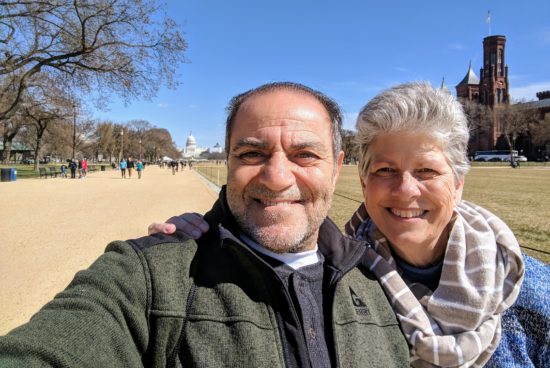 Thanks for taking a walk with us on the National Mall and around the Tidal Basin.