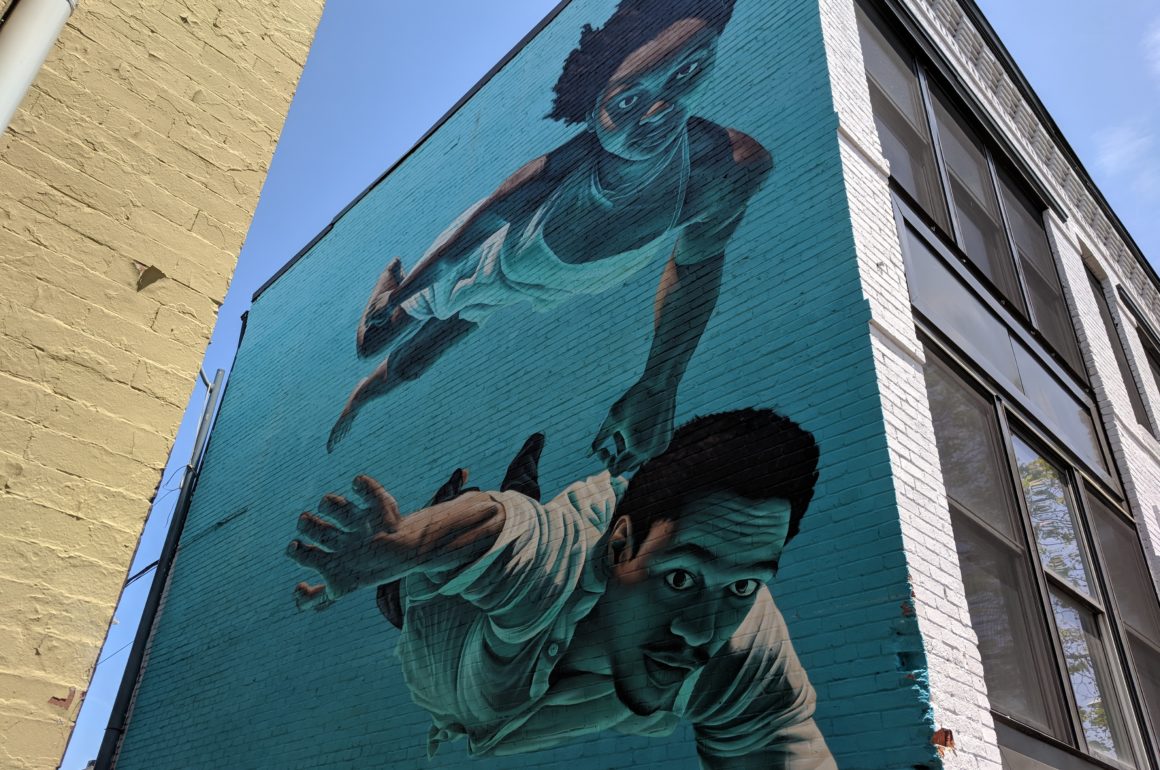 When you think of Washington, DC, what’s the first thing that comes to mind? The DC Murals, right? Ha! I’m betting your answer was politics.

When most people think of Washington, DC, politics is probably the first thing that comes to mind.  It’s only natural.  But, here’s the thing, the city has so much more to offer, that politics really does seem to take a back seat on most days.  Don’t ever let the current political vibe dissuade you from visiting such a beautifully diverse city. 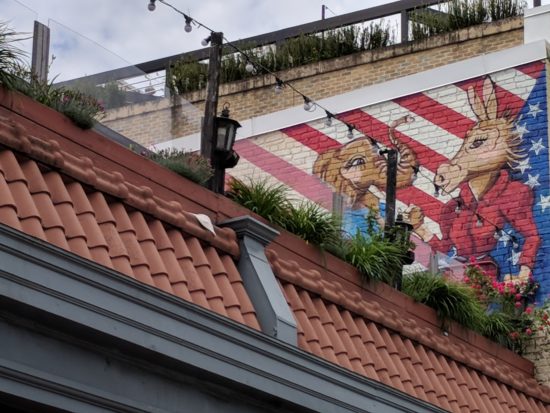 We landed back in the US pretty much five months to the day and honestly, I don’t know where the days have gone.  I know people say similar things all the time, but these past months have just flown by in a constant swirling blur.  We’ve been up to our eyeballs in first finding an apartment in which to live temporarily, followed by buying a house and undertaking a complete renovation of said house. We served as our own general contractors and did much of the work ourselves. We moved in to the house in late March, even though it was far from move-in ready. 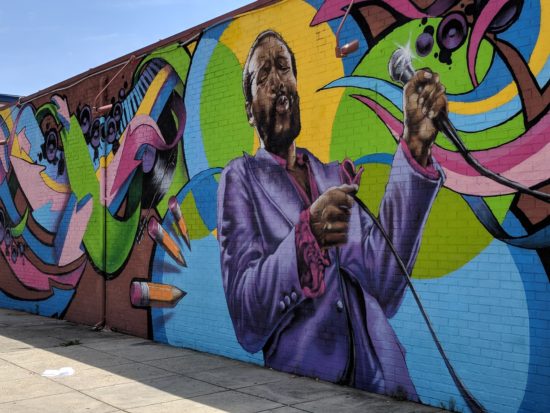 The soulful Marvin Gaye, born in Washington, DC in 1939, is located on the corner of S and 7th Streets.  The colors are so vibrant you can almost hear him crooning!

We found our cozy comfortable, and what we like to call our just-the-right-size, retirement nest. We have been working diligently to not only renovate the house, which was built in 1942, but also to adjust to daily life again after spending three months traveling through Europe and three months living in Porto.  With the holiday season upon us just days after having arrived home, followed by months of house mania, we haven’t had time to even think about catching our breath.

Oh, and did I mention we are now the grandparents of a precious little boy?!  He does not yet have a social media presence, but trust me… he is adorable and we are utterly in love with baby Jasper.

A Return to New York

Right now in this moment we are quite content to be reestablishing ourselves and feathering our nest, so-to-speak.  But that wanderlust itch we share doesn’t like to be ignored for too long so there are definitely travel plans in the works.

We are super excited to be heading back to New York City in early July.  We’ll be writers in residence with the fabulous boutique Library Hotel Collection.  We spent a few days in NYC in 2016 and as we were boarding the bus bound for home, we knew we wanted to return sooner than later, so yep, New York we’ll see you soon!

Other potential travel destinations for 2018 include a return to our beloved city of Porto, Portugal.  We’re also interested in exploring the summer beach scene in Maryland and Delaware.  And, I am aching for a return trip to Vermont to take in the fall colors with an added stop in upstate New York where we want to experience riding the rails (by pedaling) through the Adirondacks.  So many choices, we’re excited at the possibilities!

One of our local travel goals – whenever possible – is to explore the off the beaten path of Washington, DC. and surrounding neighborhoods. There is always someplace new and interesting to explore in the city and we’re compiling quite a list..  First up, the DC murals. 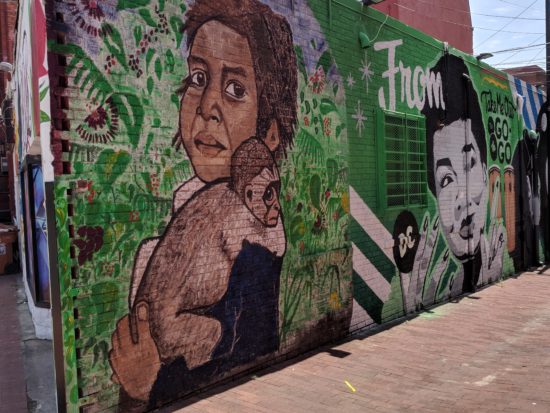 The girl with the monkey is located at 636 Florida Ave. NW

A Quest to Find DC Murals

Research tells me there are 75 DC murals to be found in the city, and we’re taking on the challenge of finding as many as we can.  Our first outting was to the U Street Corridor of the city, where quite a few murals are located.  It’s a vibrant eclectic neighborhood where one can find a plethora of choices for eateries, shopping and theater experiences.

Our first stop was Ben’s Chili Bowl because we were hungry, it was lunch time and chili dogs called to us – loudly. With satisfied bellies, we hit the street and easily found our first mural.  It was just outside of Ben’s and of course it was a mural of Ben and his wife, Virginia. 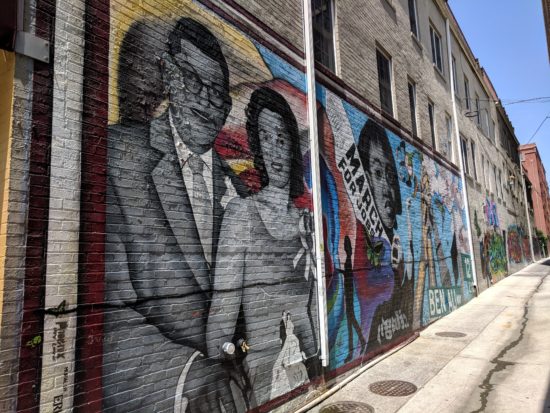 Ben and Virginia Ali, founders of Ben’s Chili Bowl. They were inducted in to the DC Hall of Fame in 2001.  The mural is located at Ben Ali Way at 1213 U Street NW.

And just on the other side of the Ben’s Chili Bowl building is the iconic DC mural, The Torch, which depicts sixteen featured personalities chosen by public vote.  It’s the most photographed mural in DC and it really is quite special. 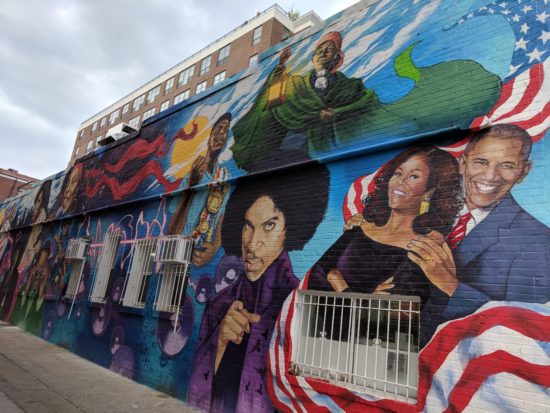 The Torch, the most photographed mural in DC is located at 1213 U Street NW.

We continued along U Street until we came to what might have been my favorite DC mural of the day.  I could not find any information on it so I’ve named it The Swimmers.  It was very powerful and it was so well-done it felt as if they were swimming right at us.  Brilliant! 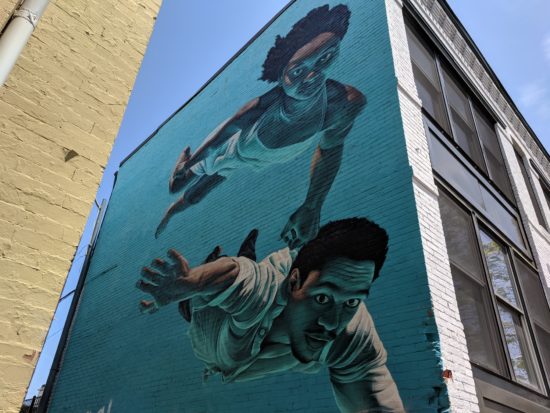 The imagery of this mural is extraordinary.  Look at their eyes!  These two swimmers can be found at 905 U Street.

As our parking meter clicked away the time we found ourselves having to make our way back to the car.  We found 13 DC murals on this day, only 62 more to go!  We stopped to say hello to Elizabeth Taylor and then we called it a day. 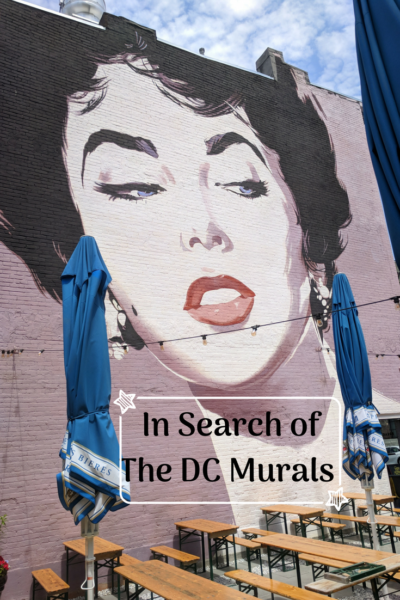 Social Distancing & A Bit of Quirk