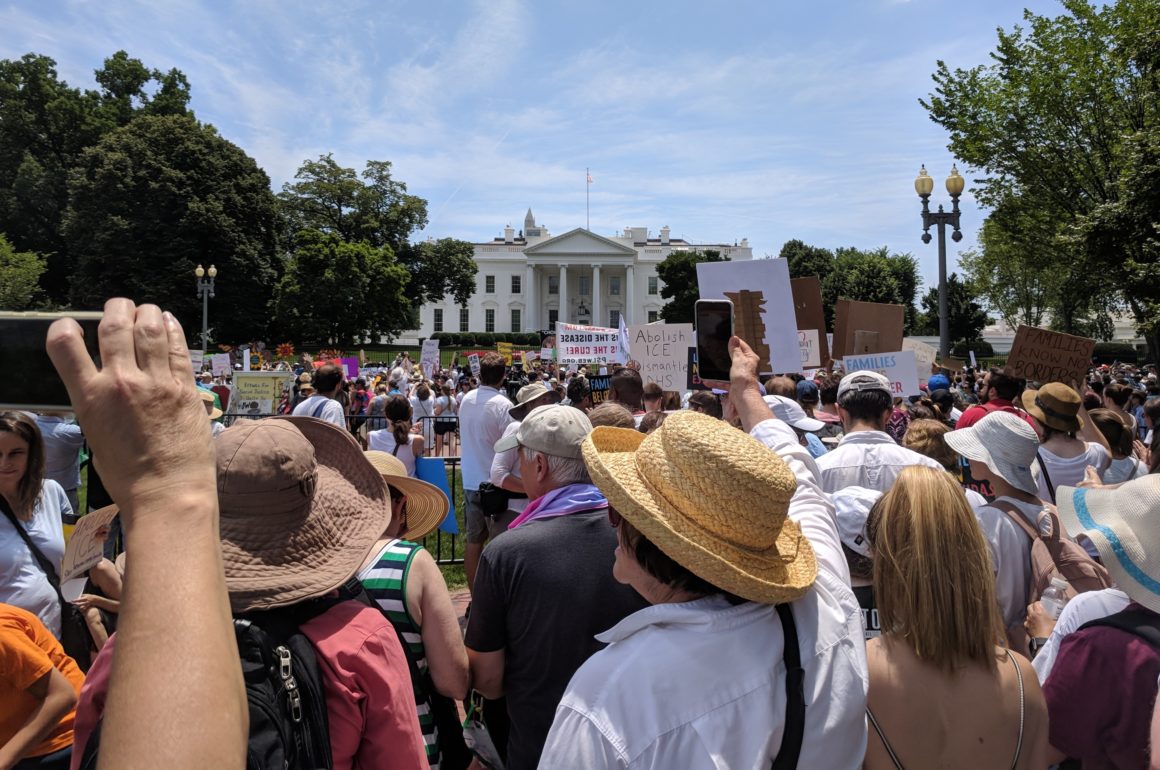 His sign read, “I’m 91 years old and I’ve never protested before today.”  The daily headlines exclaimed hundreds of thousands of people took to the streets of the United States from coast to coast on the last day of the month of June 2018. With a message of opposition to the current administration and a resounding message that all immigrants are welcome, the people marched.

Here’s the thing about redefining retirement.  It can, if the mind is open, change one’s life in ways one never even began to think possible.  Case in point.  The two of us.  In this our initial chapter of defining our path of retirement we’ve become activists, at least by my definition.  Never, in my wildest imaginings, did I ever think that within the scope of two years we would proudly march in five different peaceful protest marches, write hundreds of campaign postcards and engage with others on how to combat the complacency that runs rampant in the United States.  But, that’s what this chapter of life is all about… charting a course through the unknown.  If the mind is open, so much can be discovered.

Yesterday, on that last day of the month of June, we attended a Families Belong Together Rally held in Lafayette Park, in Washington, DC, which is located directly across the road from the White House, the people’s house.  Under the blazing hot sun with temperatures reaching 92 degrees and the humidity nearly unbearable, thousands upon thousands of people gathered and marched in peaceful protest.  It’s the American way, to make our voices heard. 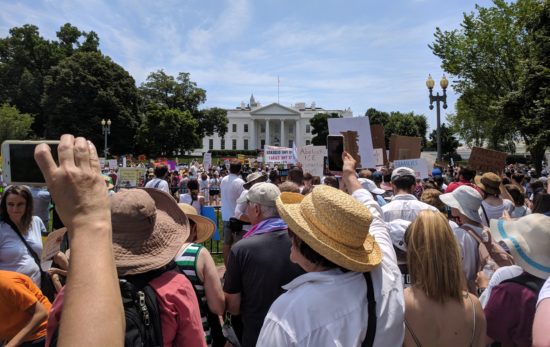 Sometimes, it’s the minority number of voices that seem to drown out the voices of reason.  Which can lead to… headlines.

I came across a recent headline proclaiming tourism to the United States is on the decline.  “Well, that sucks,” I thought.  But I wasn’t the least bit surprised given the constant rhetoric and fear-mongering of the daily headlines.

There are 325.7 million people in the United States. And, the contiguous 48 states alone have a combined area of 3,119,884.69 square miles.  Let that soak in for a minute.  I’ve said it before and I’ll continue to say, the United States is massive.

We’ve driven across the United States four (or maybe it’s five) times and each time we made the trip we learned something new.  Mostly, we’ve learned that it is not at all surprising we have such heated debates among the population.  Each state has it’s own government, cultural norms, dialects and traditions. And, those who live in the heart of the mid-west, say Oklahoma for example, may find it challenging to find common ground with those who live in fast-paced New York City, (and vice versa) a city with a population of 8.5 million compared to the population of the entire state of Oklahoma which comes in at 3.9 million.

Travel is a Powerful Teacher

The US is far from being without issues.  But, aside from maybe Iceland, I can’t think of too many countries that are considered to be popular travel destinations that don’t have issues.  We’ve witnessed multiple protest marches in Paris (and Paris has definitely had its share of horrific headlines) and Berlin. We’ve visited Hungary and Austria, beautiful countries with warm inviting people, and yet their governments are moving further to the right.  And, let’s not forget the chaos of Brexit in the UK.  And, in the Middle East, Iran is a country misunderstood by so many, but yet you won’t find a more hospitable people and tourism is booming in Iran.  All fantastic travel destinations, all with some serious issues. 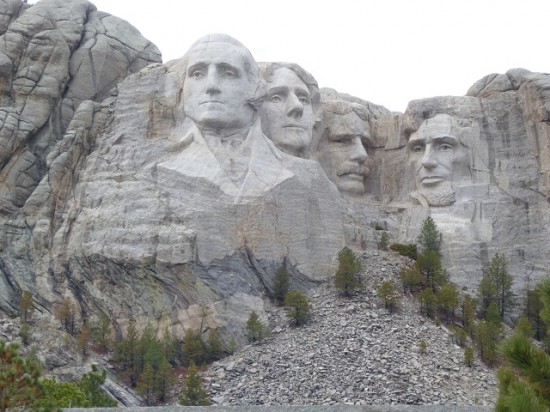 Mt. Rushmore from our northern route cross country road trip. One of my all-time favorites.

Depending on which side of the aisle one stands in this country – and really there should be about six aisles in a country this size – the country is either moving forward or backward.  But either way, it should not stop visitors from exploring the wealth of wonders this country has to offer.  The National Parks alone are awe-inspiring. The Grand Canyon and Yosemite? Come on. It doesn’t get much better.  How about San Francisco, New York, Washington, DC and yes, the gaudy over-the-top glitz of Las Vegas?  Take a road trip through the New England states in the fall and you’ll swear you’ve never before seen such beauty.

The Voices of Tourism

Although it may seem as if I am, I’m not really “pitching” the United States. I know there are some scary and often sensationalized headlines around the world touting how screwed up everything is.  And, truthfully, I wouldn’t find fault with anyone who chooses not to visit under the current climate.  I’m simply suggesting to those reading the headlines to keep it all in perspective given the millions – and millions – of people in the US who welcome visitors and immigrants every single day.  But, don’t just take my word for it, here’s a couple of other voices who can offer their insight to traveling in the US. 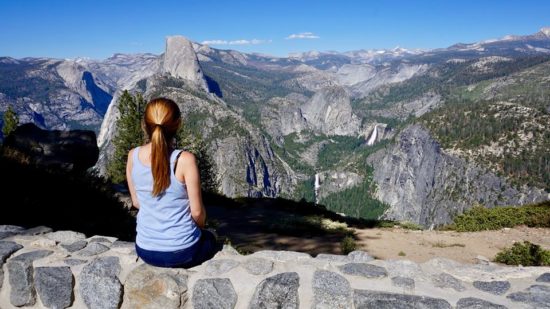 Amy of Our Big Fat Travel Adventure taking in the spectacular views of Yosemite National Park.

If travel has taught us anything, it’s that more often than not, the government of a country does not necessarily represent the will of the people.  In the US, for example, we have an antiquated electoral college system that has put in place an administration the majority of the people did not vote for.

People around the world are just trying to live their best lives, often times in spite of their government.  I suppose the silver lining in such trying times is that adversity can awaken the complacent and bring about change.  Change for the betterment of all.

In the meantime, travel is such a powerful teacher and if the mind is open, so much can be discovered.

Social Distancing & A Bit of Quirk

A Field of Sunflowers & Shared Sentiments

« Previous post
Megabus, Times Square & A Night in Casablanca
Next post »
The Camino, A Toddler, & The Yellow Envelope