Legend of the Capitol Stones & Columns 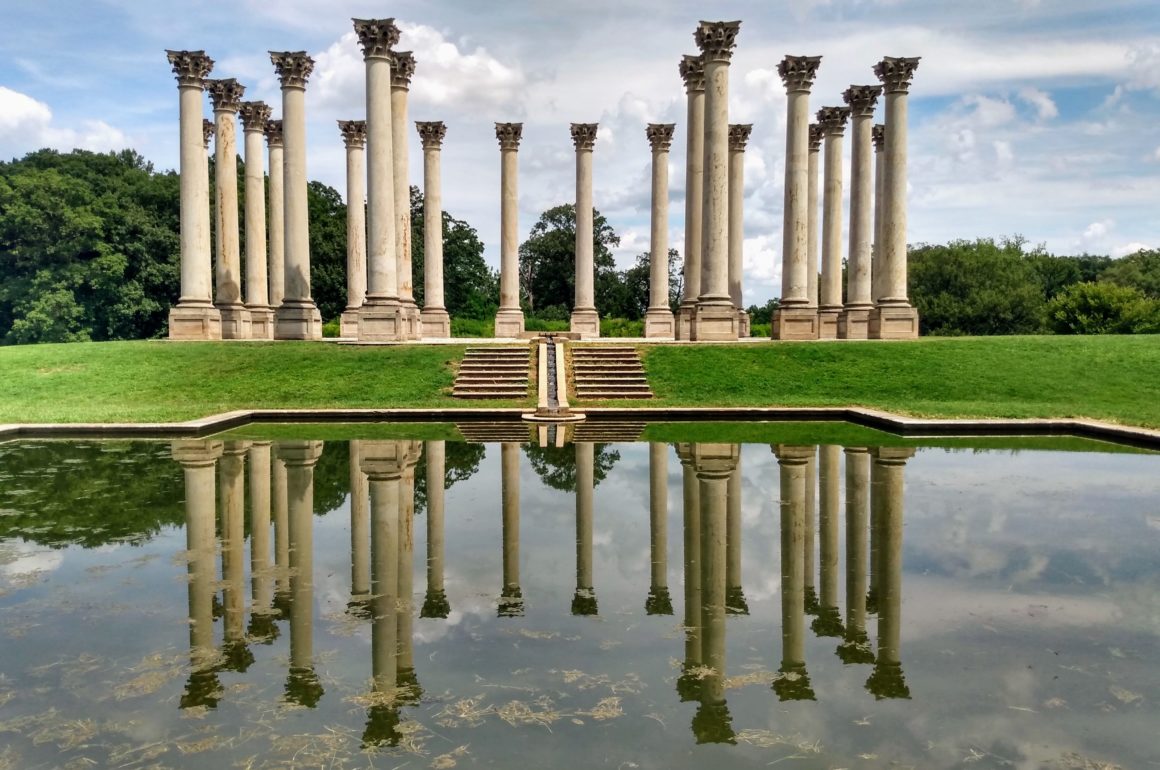 You know how it is when you tell yourself you really shouldn’t have that third piece of chocolate, and then all you want more than anything else in life is that piece of chocolate? That’s what it feels like, in my mind, to have a passport collecting dust and being told we can’t leave the country. Nope, not even to pop up to Toronto, Canada to visit family. When someone tells me I can’t do something, it becomes the one thing I want more than anything. Is it just me?

Our ongoing quest is to seek out new destinations in our own backyard. We enjoy driving the back roads of Maryland, Virginia, and Washington, DC and recently, we went looking for what is seemingly a bit of an urban legend, the Capitol Stones. Or, at least I like to think of them in that way. From there, we went on to the National Arboretum and found the second piece of the legend, the Capitol Columns.

An 1890 Act of Congress led to the establishment of Rock Creek Park. With 1,754 acres, the park bisects the northwest quadrant of Washington, DC. Miles and miles of trail traverse the acres of woods and open spaces, which allows visitors opportunities to hike, bike, throw a frisbee, or just enjoy a picnic in the shade. The only public stables in Washington, DC are also located in a beautifully wooded area of the park. Near the stables is where we started our search for the Capitol Stones.

Having once been the facade of the capitol building, the stones were taken down in 1958. What to do with a massive pile of carved stones? Abandon them in a park, of course. Although, before the stones were abandoned in the park, they sat on the property of a power plant until the mid 1970’s.

As I understand it, when the capitol building was revamped (for lack of a better word) no one had given thought as to what could be done with the old sandstone stones. The architect of the project (who apparently had no real training) had justified the cost of the new marble exterior by continually downplaying the usefulness of sandstone. Having the stones used for another purpose, on another building or monument, etc., was out of the question because it would negate the argument of the stones usefulness. Out of sight, out of mind as they say.

Fast forward to 2020 and the stones still sit hauntingly in a pile of rubble, gathering moss and most likely sinking back in to the land. Apparently, the stones are under the possession of the Senate and House office building commissions. I’m pretty sure the stones are not exactly top priority. It’s a shame, really, to see the skill of so many stone carvers reduced to a pile of rubble; an urban legend hidden away in the woods.

How to Find the Capitol Stones

The stables are located at 5100 Glover Road NW, Washington, DC. We drove just beyond the stables and parked near the maintenance yard. From the parking lot, walk up the small hill toward the stables. Once you reach the stables’ fence, turn right and follow the trail while keeping the stables on your left. You’ll soon see where you can veer right and when you come to the fork in the road, stay to your right. The stones are just aside the trail on the right, hidden in plain sight, in the woods.

Just a few miles from where the Capitol Stones lay in Rock Creek Park is the National Arboretum. Another first for us, to visit the arboretum and search for the Capitol Columns.

Seemingly, the National Arboretum is off the beaten track in that most tourists (and I suspect many locals) don’t make it to the park. It’s not downtown DC where all of the action is. Although, it’s actually only a 10-minute drive from the capitol building, on a good traffic day.

The National Arboretum was established in 1927 by an Act of Congress, and is home to 446 acres.

Fortunately, the original Capitol Columns did not suffer the same fate as the Capitol Stones. From 1828 to 1958, the columns supported the east portico of the Capitol Building. When a new dome was built, it appeared the columns would not support the new dome because it was much larger. Fast forward through a whole lot of what to do conversations, the columns were removed and replaced with marble columns.

The original columns were housed in government storage until 1984. It was then the Dept. of Agriculture, along with private donors, placed the columns in an arboretum meadow, now known as the Ellipse Meadow. The meadow is a wide open 22-acre space and the Corinthian Columns stand tall and proud. For being so old, they are still majestic and in very good condition.

The columns are quite popular for photo opportunities. Our son and daughter-in-law had their engagement photos taken at the columns. On the day of our visit, a young woman was having her graduation photos taken. The columns definitely make a dramatic backdrop.

How to Visit the National Arboretum

The National Arboretum is located at 3501 New York Avenue, Washington, DC. The park, as I mentioned, is home to 466 acres so be prepared with water, snacks and sunscreen. If you visit during the summer months, definitely carry mosquito repellent. Our best suggestion is to find your way to the administration building where there is nearby parking. Once there, it’s a good idea to find a map and get your bearings. The columns are a short walk from the administration building.

The arboretum has an abundance of wonderful offerings for the visitors, including but not limited to:

If you go, it’s a good idea to check the website for rules and guidelines, especially in this time of Covid-19. All of the public buildings were closed on the day of our visit.

Now, more than ever, is the time to take a walk and stop to smell the roses. Or, in this case, look up at majestic columns that hold tales of history.

A Field of Sunflowers & Shared Sentiments