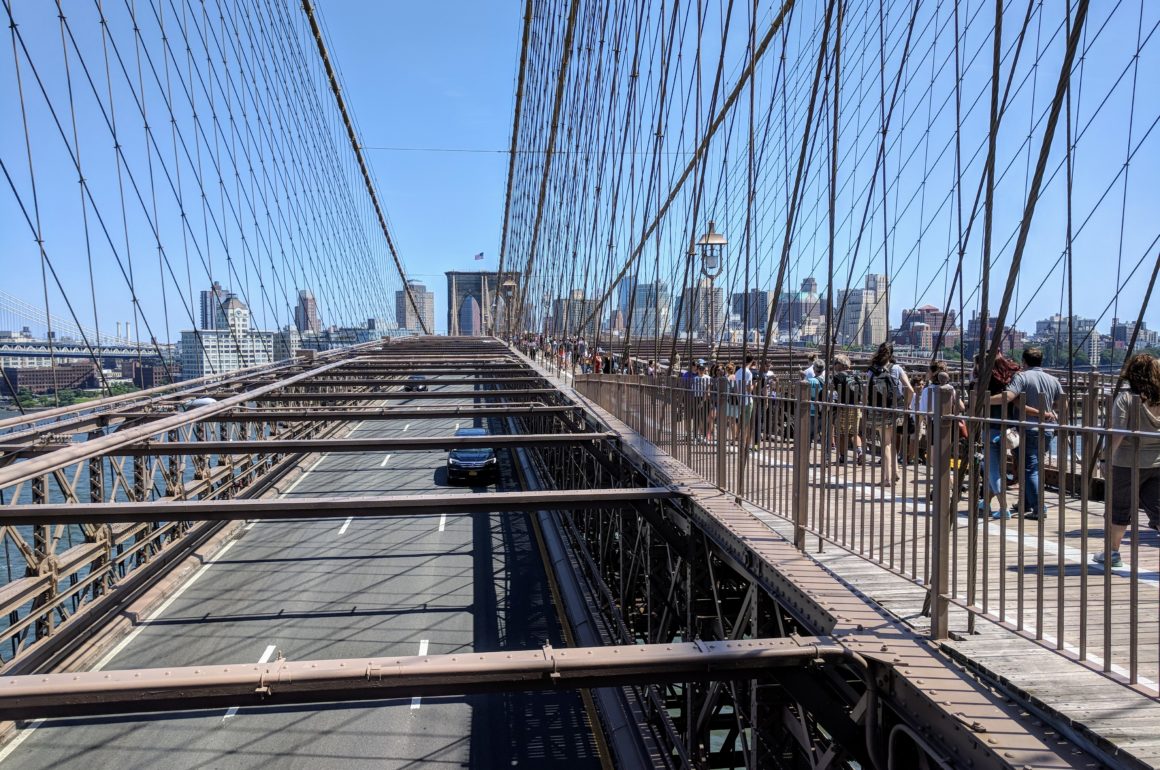 There are a few things that must be experienced when visiting New York City and on our 4th and final day in the city we got them all in.  Noodles in China Town, gelato in Little Italy, taking in the views from the Empire State Building and a walk across the Brooklyn Bridge were the highlights of our day.  And, we were fortunate enough to cap off such a terrific day with a stay at the fabulous Hotel Giraffe located at 365 Park Ave S.

If you’ve been with us for a while, you know well of my wicked (and frustratingly annoying) fear of heights so it should come as no surprise that taking in the views from the top of the Empire State Building was not going to happen. I did, however, have every intention of making it across the Brooklyn Bridge.  But, you know what they say about good intentions. 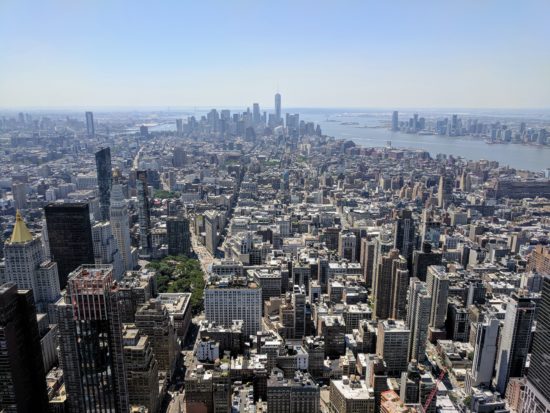 Stunning view from atop the Empire State Building.

While I waited in the classic Art Deco designed lobby of the Empire State Building, Abi went up, up, up to take in the views from the 86th and 102nd floors, and gleaned some great photos of the city.  It was a beautiful day and he could see for miles.  The mere thought of being on the 102nd floor of a building… I can’t even.

Lunch in Chinatown was the order of the day.  We stopped in at a tiny little restaurant where tables were crowded together and patrons could easily see the cook pulling noodles in the tiny little kitchen. The restaurant was literally named, Tasty Hand-pulled Noodles, Inc.  Do you love noodles?  Please tell me you do. 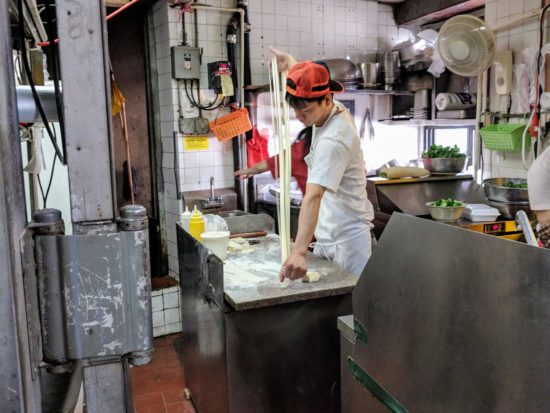 If you find yourself in Chinatown don’t just stop for lunch.  Walk up and down and across the neighborhood streets.  Take it all in, the culture, the sites, the sounds, it’s as if you’ve been transported to another country, all the while never leaving the City of New York.  Do you know that Chinatown, with an area of two square miles, is the largest Chinatown in the United States and has an estimated resident population of 150,000?  Well, now you do.

A similar experience can be enjoyed in Little Italy.  If you’re going to have pizza, you might as well have yummy pizza and where better to find it than in Little Italy.  Although, it can be said that there are an unbelievable number of pizza places in NYC.  I looked it up.  Can you guess how many?  So, whether it’s in Little Italy or pretty much anywhere else in the city, you’re going to get some great pizza.  Since we opted to have noodles for lunch the next best thing we could think of was of course, gelato. 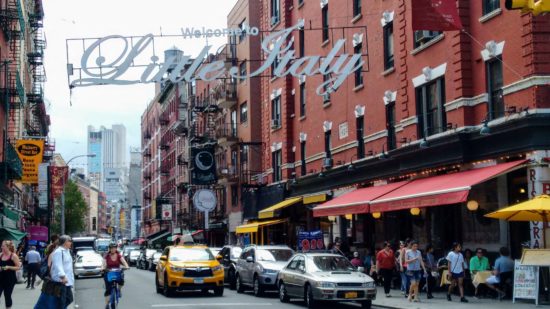 What’s interesting about Little Italy is just that… it’s little.  The neighborhood – back in it’s heyday – encompassed 30 blocks in the lower east side.  Now, it’s a small cluster of shops and eateries centered around Mulberry Street.  It’s still a fun place to see and experience, albeit very touristy.

Ah… the Brooklyn Bridge.  I can’t tell you how much I was hoping I could conquer the fear and walk, at least half-way, across the bridge.  It can be said that there were maybe a gazillion people with the same idea that day, after all it was summer and it was the 4th of July holiday weekend.  As we made our way up to the bridge I started getting weak in the knees and I knew I wasn’t going to make it.  Here’s the thing about fear, it has a life of its own and there’s not a damn thing one can do about it when it takes hold. 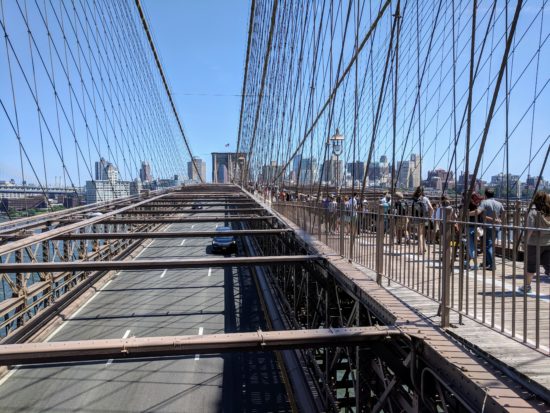 Abi braved the crowds and craziness and carried on.  He made it out to maybe the second section of the bridge, far enough out that he was over the water and then said he’d had enough.  Way too many people, people stopping to get that perfect selfie and the bicycles, it was a bit too much.  But, he can now say he has walked the Brooklyn Bridge.  I cannot.  Alas.

A Night at the Hotel Giraffe 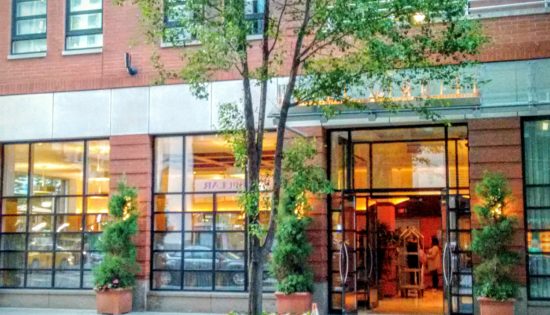 Welcome to the Hotel Giraffe.

I have no idea why the Hotel Giraffe is named the Hotel Giraffe, but I like to believe it is because the hotel offers a sleek and elegantly modern atmosphere, from the grand lobby to the roof top garden. The clean lines of the paneled walls to the warm hues of the guest room decor.  It all fits.  It’s all elegant, just like a graceful giraffe. 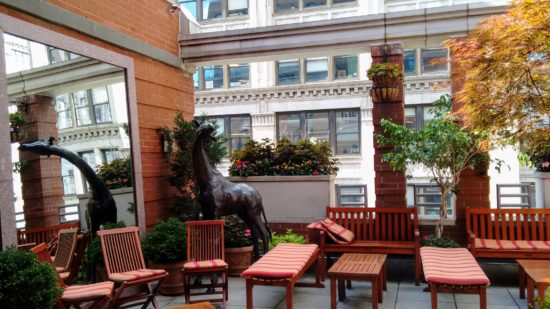 The rooftop garden under the watchful eye of the giraffe.

After our long day of traipsing through China to Italy to the Brooklyn Bridge – and so much more – we were ready for happy hour and definitely looking forward to it.  I have to say we were getting quite spoiled enjoying happy hour each evening and a yummy breakfast each morning.  Is there anything better, after a day full of adventure, than relaxing with a glass of wine with crackers, cheese, olives and nuts?  I think not. 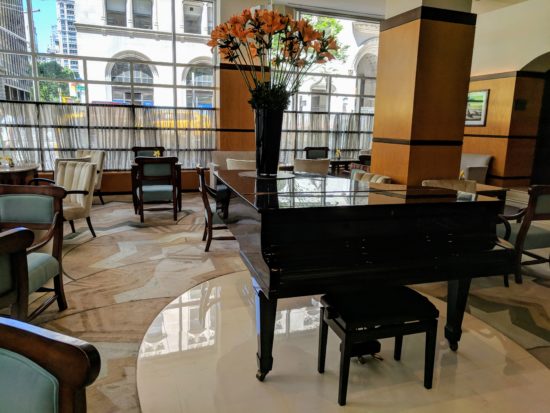 We enjoyed our stays at the Casablanca, the Library and the Hotel Elysee.  So much so that each evening we found ourselves hesitant to even venture out.  Instead, each evening we just embraced the opportunity to relax and bask in the luxury of our guest room because really, who doesn’t love staying in a luxury hotel? 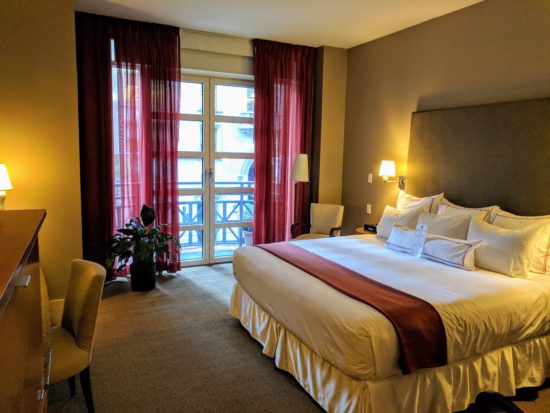 Our beautiful guest room at the Hotel Giraffe.

Our 4-day stay in New York City was almost too much fun.  I say almost because there is always something new to explore and experience.  It’s a fantastic city and we look forward to our next visit.  If you find yourself in New York City, and really you should, don’t miss out on all the city has to offer.  There’s no other city in the world quite like it.  But, don’t take my word for it, go see it for yourself! 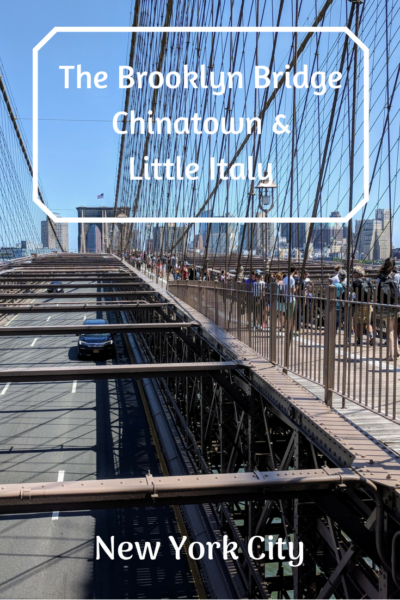 « Previous post
How We Spent the 4th of July in Philadelphia
Next post »
Central Park, Art Museums & A Night of Old-World Charm