Seventy down and sixty-eight back up – that’s the number of stairs and the only way to get in and out of the Luray Caverns in Virginia. And, surprisingly, there is no grand cave-like entrance; rather just a simple doorway near the gift shop that leads the way.

Once down inside the cavern, it’s an easy walk along 1 1/4 mile of paved walkways and at the lowest point, visitors are 164′ below the earth’s surface.  As I looked around at the massive underground space, I whispered to Abi, “No wonder sink holes seemingly appear out of nowhere, look what’s under the surface!”

It Never Ceases to Amaze

It never ceases to amaze me.  You’re on a tour – in a fantastic place – and the guide asks the group to please refrain from touching any of the natural formations. You know what happens, right?  At least 1 person is going to reach out and touch that which is not supposed to be touched.  I can almost excuse the young teen girl, but the grown man… not so much.  But, I suppose it’s part of the human psyche, tell someone not to touch something and sure as sure can be they’re going to put their hands on it. 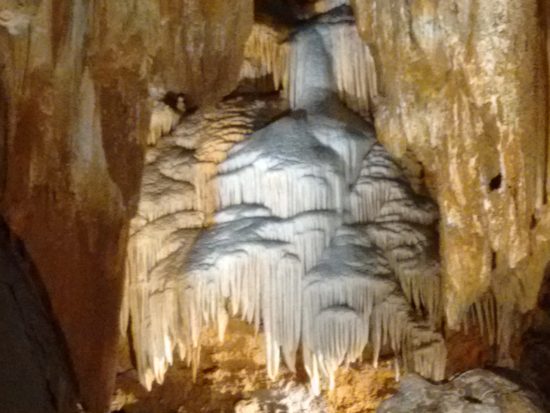 What was genuinely amazing though was the size and wonder of the cavern.  Walk around on the surface of the earth and think nothing of it, walk below the surface of the earth and it’s another world.  Almost looks like something Disney created for a movie set, but is in fact the genuine article.  Discovered in 1878, Luray caverns is the real deal and it is truly fascinating.

I’d have to say one of our favorite views in the cavern was the small lake where the water is so pure and clear it creates a perfect reflection of the ceiling formations.  The depth of the water is only 18 – 20″, but if the water doesn’t move, and if no one was there to tell you otherwise, you’d probably never realize what you were looking at. 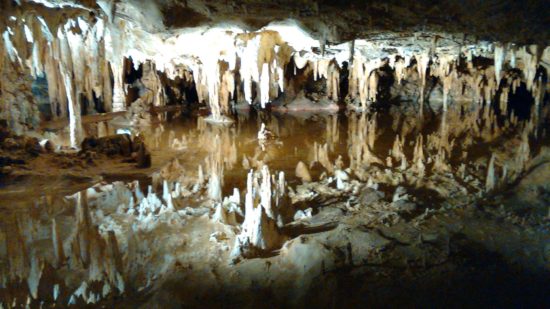 The perfect reflection of the ceiling formations.

Standing well below the earth’s surface, and in a huge open space in the cavern, one would not expect to find an organ, but it’s there.  It was said the son of Leland W. Sprinkles (what a great last name) bumped his head on a stalactite while visiting the cavern in 1954 with his father.  The tone of his head bumping the stalactite inspired his father to make music deep inside Luray Caverns.  From that moment, the great stalacpipe organ story began. 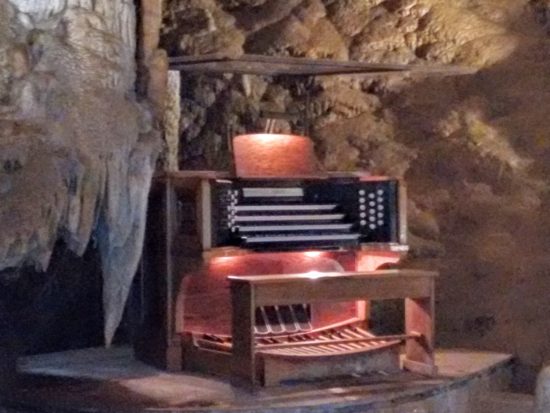 My Wicked Fear of Heights

Most of you know I have a wicked fear of heights and although there were a couple of spots where I was hugging the wall side of the walkway, I was never overly shaking in my boots because all of the walkways are wide and have railings.  If you happen to be claustrophobic, no worries there either as the rooms are quite large and we never felt as if the walls were closing in on us.  And, the rooms and walkways are well lit. 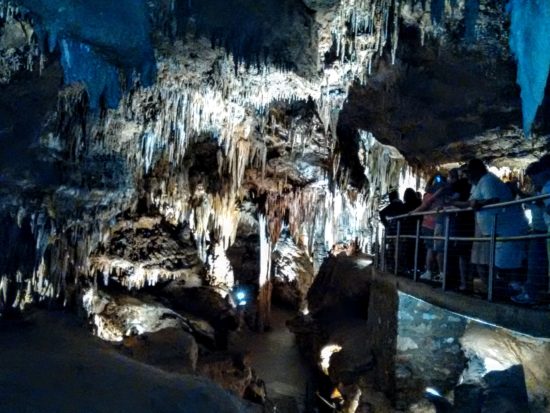 Okay, the phobia portion of the program is behind us. Let me just say that we had a terrific time and we gratefully acknowledge Luray Caverns for hosting our visit.  Anytime we can try something new and learn while having fun, well… it just doesn’t get much better does it? 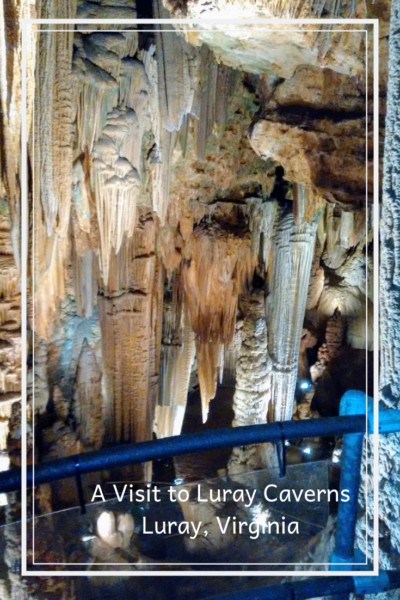