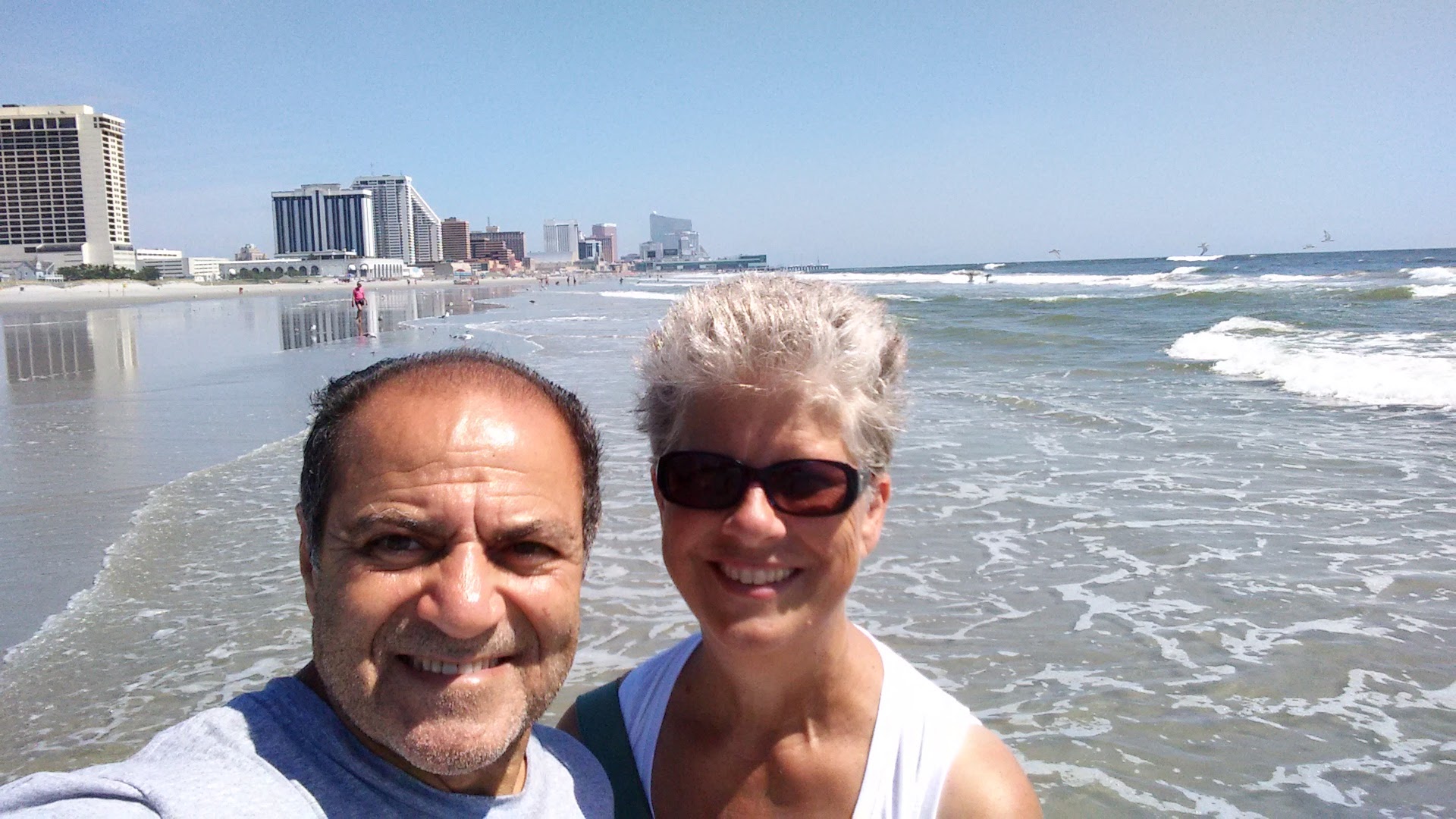 Just over the bridge from the sleepy seaside village of Brigantine Beach, New Jersey, lies the shore of Atlantic City’s Beach and Boardwalk.  It’s an American classic, Atlantic City, one of those places that most everyone has either visited, or is curious about doing so.  I can now say we’ve done both.  We’ve been curious and we’ve been there.  We’re good.

What I found on the shore of Atlantic City Beach and Boardwalk was a sense of days gone by; a lost era trying to stay afloat (pun intended).  It’s everything one would expect it to be and if one were to believe the reviews, it’s barely hanging on.  And, I’d have to say it’s clearly evident this is the case. 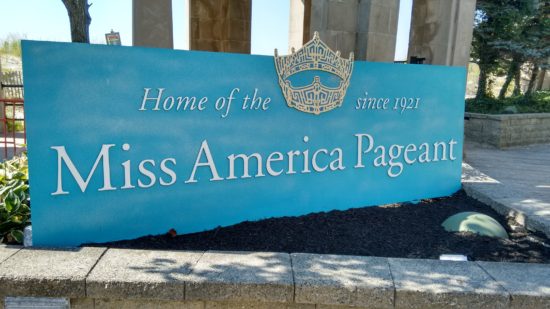 I think it’s safe to say Atlantic City is intrinsically linked with the Miss America Pageant.  As a matter of fact, we parked our car in the garage of the Boardwalk Hall where they were rehearsing the upcoming pageant which will be held on September 11.  Whether you’re a fan of the pageant or not, it is another iconic part of American culture, quite possibly also hanging on to days gone by.  Fun factoid:  The Miss America Pageant was created in 1921 to keep tourists in Atlantic City through the Labor Day weekend.

It would seem Atlantic City has been trying to hang on for a really long time! Perhaps even more so after nearby states Pennsylvania, New York and Connecticut legalized gambling making it unnecessary for those who like to pull the 1-arm bandit to travel to Atlantic City.

We walked for miles along the boardwalk and yes, it is literally a wooden boardwalk.  Two outside lanes for pedestrian traffic with the the middle lane reserved for bicycles and $2.25 (one-way) shuttles.  We chose to walk away from the glitz of the casinos and endless row of souvenir shops in favor of the residential neighborhood fronting the beach.  The area is a mixed blend of what one can only imagine were grand summer estates from another era, butting up to modern condos on one side and empty lots long overgrown boasting “For Sale” signs. 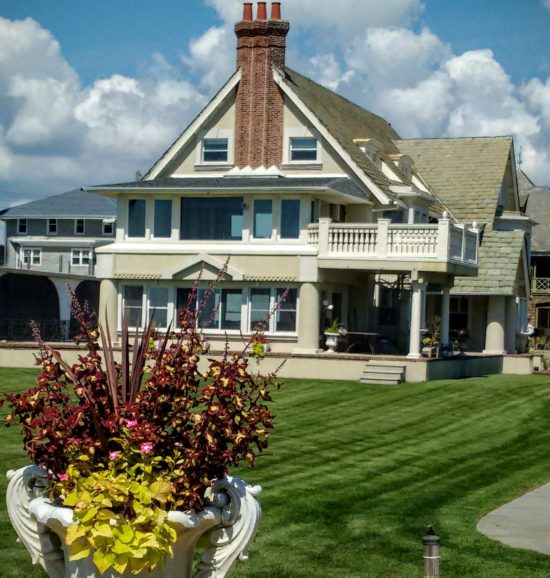 You could just imagine the family members dressed in their pristine white summer clothing playing croquet.  Just behind the me and the camera is the boardwalk and the beach – talk about beach front living!

The beach is where it’s at as far as I’m concerned.  Miles of fun coastline just a stone’s throw from the boardwalk.  It’s clearly a good time on the beach.  Locals and visitors alike splashing in the waves, body surfing, fishing, building sand castles and getting sand in places where one should never find sand.  We walked a good couple of miles along the shore letting the waves froth around our feet and we brought home a small collection of sea shells, because well, we could.  How often can you say this pretty seashell was on the seashore of Atlantic City?  Seriously, how many times can you say that? 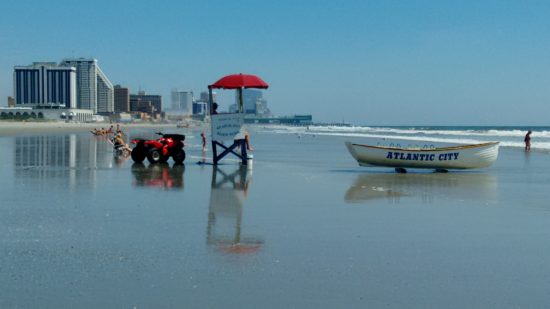 The beach! The large white/black building on the left is the abandoned Hilton Hotel. Sadly, it’s not the only one.

The Not So Pretty Boardwalk

Walking along the boardwalk you’ll find abandoned buildings such as the Hilton Hotel, with the haunting outline of the word, Hilton, near the roof line.  It’s not the only one, there are several closed casino hotels. The Taj Majal had long picket lines at the edge of the property and apparently, its days are numbered.  Occupied buildings fight the wear and tear of salty ocean air, with surfaces literally peeling off.  Souvenir shops, one after the next, are sandwiched between massage parlors and eat/drink shops. 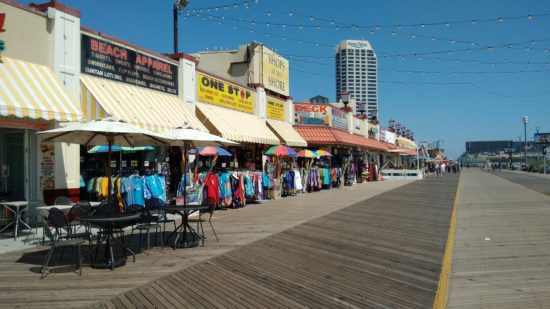 Souvenir shops one after the other line the boardwalk.

And, Guy Fieri’s voice (from Diner’s, Drive-Ins & Dives) booms loudly from seemingly out of nowhere touting people to eat at his BBQ restaurant. He annoys me anyway so no way. While on the beach we loved the fresh ocean breezes, but while on the boardwalk, the sun was hot so we kept our stroll to a minimum.  We didn’t make it as far as the Steel Pier amusement park, but it seems to be tangled in financial woes as well.

We actually did enjoy our time spent at the Atlantic City Beach and Boardwalk, (mostly the beach) but I suspect one time will do it for us. Even though the long walk on the beach was super fun on a beautiful summer day, I don’t believe it’s enough to entice us back.  We only walked in to one casino and that was to find the Starbucks, which by the way, was the most we’ve ever paid for our standard Starbucks’ order.

The city has reinvented itself more than once.  Gambling was introduced in 1976 to revitalize the boardwalk economy and I’m guessing another master plan to attract tourists to the city will develop at some point, sans the casinos.

With all of that being said, I do think it’s a place everyone should visit at least once just because it is such a part of our culture.  And, really, why not?  If you find yourself on the Jersey Shore, go for it and decide for yourself. 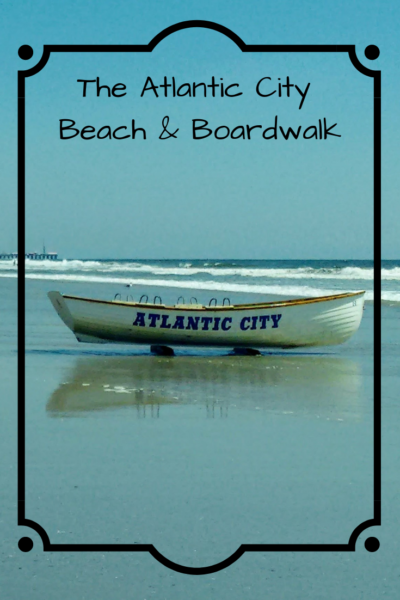