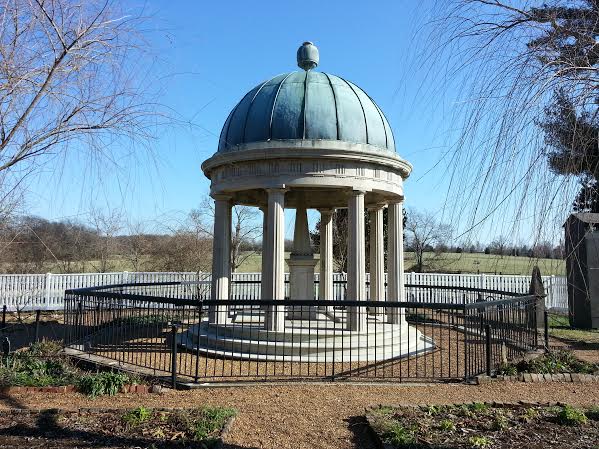 Imagine living to be 99-years-old and living your entire life in the same place, never going beyond what you know.  This is the story of Alfred – Alfred Jackson – an enslaved man who spent the better part of his life in servitude to President Andrew Jackson.

Alfred Jackson:  The Son of Betty

Alfred, was the son of Betty, Andrew Jackson’s enslaved cook for 50 years.  Betty, inherited the job of cook from her mother, Old Hannah.  Alfred, was born at the Hermitage and he lived on the plantation longer than anyone on record.  He was responsible for maintaining the wagons and farm equipment, and he tended the horses.  He married Gracy and they had two children.  Alfred also served as Andrew Jackson’s personal man servant.

This was just part of Alfred’s story told to us by the period-dressed docent on our tour of Andrew Jackson’s Hermitage plantation. 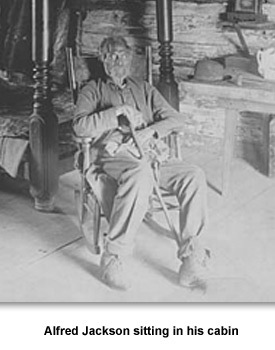 I think what makes the Hermitage such a fascinating place to visit is that the home was never occupied by anyone outside of the Andrew Jackson family line.  It is because of the family ownership and continual occupation, approximately 90% of the furnishings are original to the home.

It’s a complete rarity to find such a thing.  Think about it.  We’re talking about a mansion that was built in 1821, lived in by generations of the same family, and their possessions are still in the home.  That fact, in itself, is an incredible story. 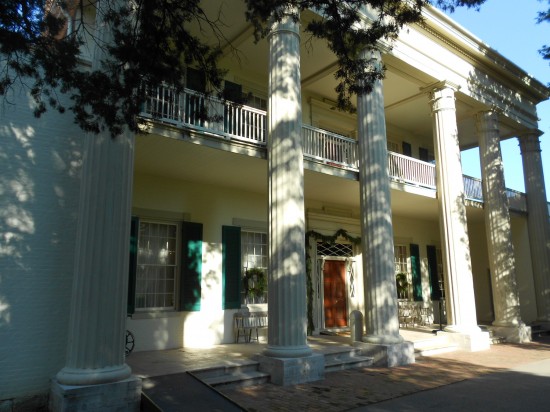 To continue with Alfred’s story.  As it was explained to us, after emancipation Alfred stayed on the land and became a tenant farmer.  He chose to continue to live in the same log cabin he lived in throughout his life as a slave. 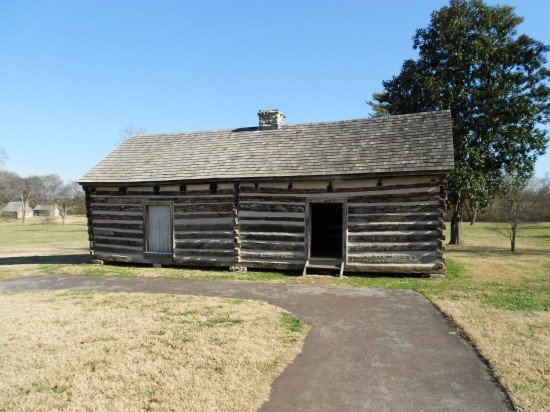 The right side was Alfred’s cabin.

After the civil war, the south was destitute, the confederate dollar was worthless. Although the last two remaining members of the Jackson descendants were still living in the mansion, the mansion and the farm fell into a state of disrepair.  Alfred, who had been able to save some money as a tenant farmer, purchased a few pieces of furniture from the mansion. 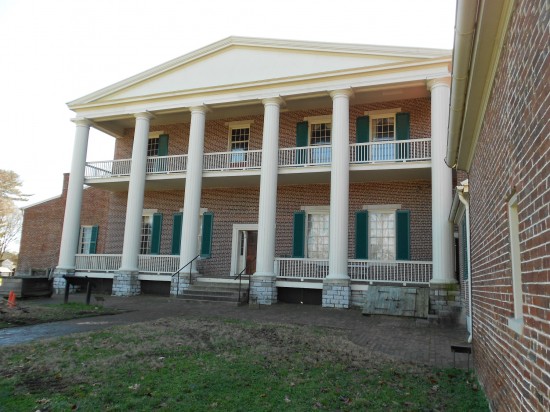 The Hermitage – back entrance 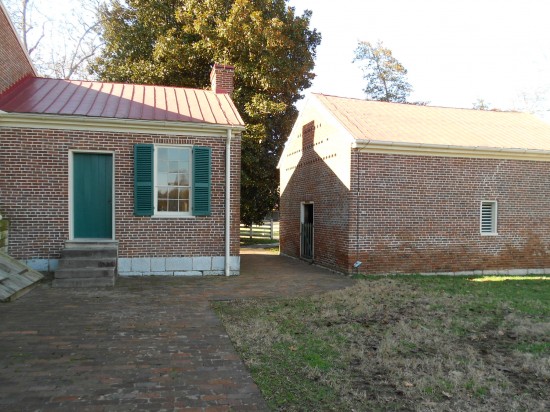 The kitchen and the smokehouse

In 1889 the newly chartered Ladies Hermitage Association gained control and ownership over a section of the plantation including the mansion, outbuildings and 25-acres of land.

“It took over 110 years, but in 2003 the LHA finally had control of the entire 1,050-acre Hermitage cotton plantation that Andrew Jackson owned when he died in 1845. Today, the LHA manages 1,120 acres, making The Hermitage one of the largest and most popular historic site museums in America.”   The Hermitage

Alfred, owning several pieces of the original mansion furnishings, was asked if he would sell the pieces to the LHA in order to return them to the mansion.  He did so, but he had one request and the request was that he be buried near President Jackson and his wife, Rachel.  The LHA held up their end of the bargain and Alfred’s grave is in the garden, just to the side of the Jackson shrine. 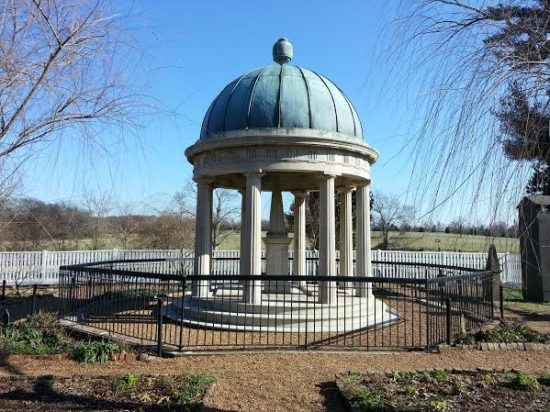 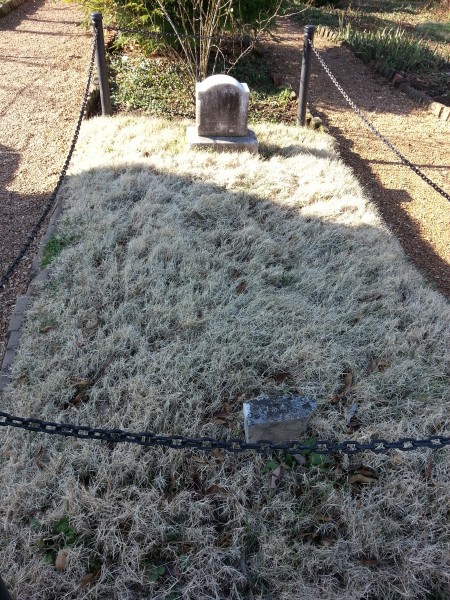 Alfred Jackson died at the age of 99, which is what we were told on our tour. However, there are, apparently, different thoughts on this as noted in the thread of comments on our post.

Alfred was born a slave, was emancipated and became a tenant farmer and he volunteered as the first tour docent at the Hermitage.  I’m adding Alfred to my list of those I wish I could invite to dinner.  Think about the stories he could tell!   I can’t help but wonder, why did Alfred stay after he was freed?  Was he loyal to Jackson or was he simply content to stay in the only place he had ever known?  So many questions left unanswered.

From what we learned on the tour and from what I’ve read, Andrew Jackson was a man of contradictions.  Like many men of wealth at the time, Jackson built his wealth on the backs of an enslaved community having owned a large number of slaves. 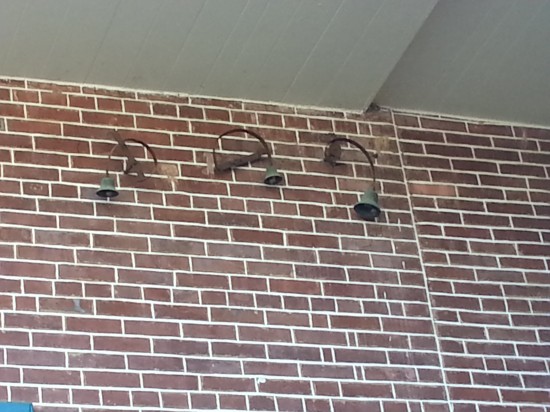 As the 7th president of the United States Jackson campaigned for the common man, but he owned slaves.  He considered his slaves his black family.  What was explained to us, by the docent, was that he felt he was good to them because he clothed, fed and housed them.  However, he was not opposed to having them whipped for insolence.  If they were in his good graces, all was well, but if someone crossed him, there were harsh consequences.  He actually took legal measures (against the overseer) when his overseer killed one of his slaves.  But, what was the actual motivation for the action?

The Hermitage is an amazing historical site; not only the mansion, but the outbuildings as well and the surrounding farm lands.  Located just outside of the thriving city of Nashville, our docent reminded us that in 1821 – when the Hermitage mansion was completed – Nashville was considered living remote; back country.  The wild west if you will, where one had to be self-sufficient and live off of the land. 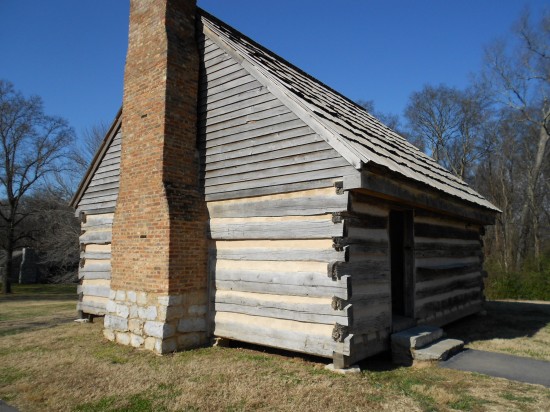 The restored log home of Andrew and Rachel Jackson, before the mansion was built

Visiting the Hermitage – and learning the story of Alfred Jackson – is a fascinating study in history and it paints a realistic picture of daily life in that era.  But it’s a picture of contradictions.  To read more about Andrew Jackson:  Trail of Tears 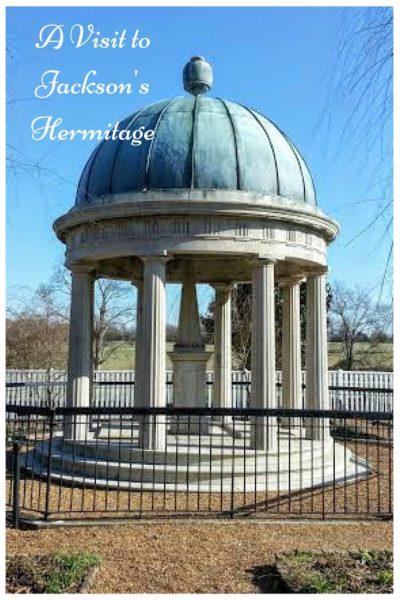