The Reconstruction of Dresden, Germany 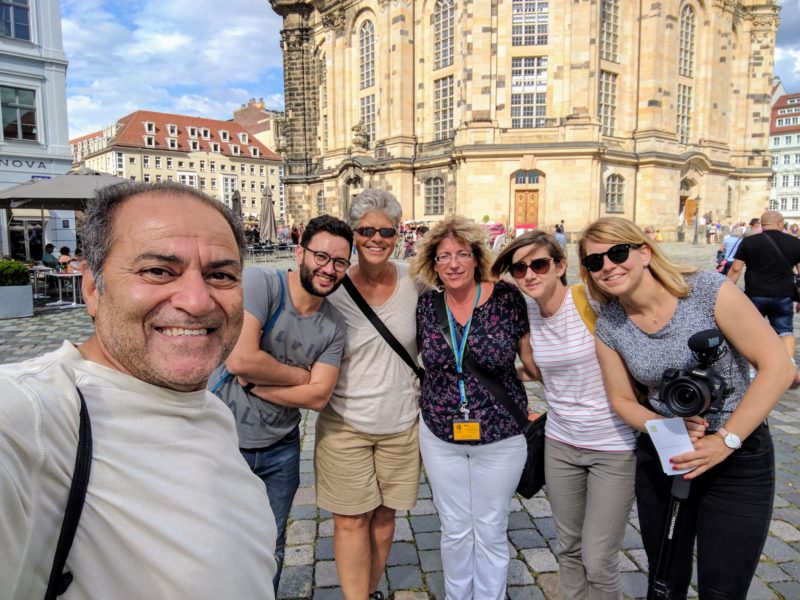 I’m starting this post with a photo.  It’s a photo that depicts one of the best aspects of travel.  Anytime you can learn from an experience and meet good people, such as this group we met in Dresden, it’s a win. 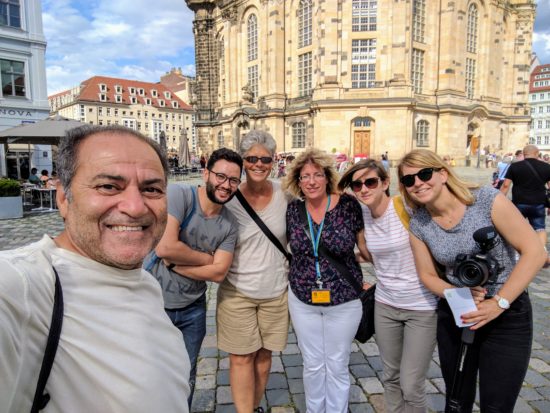 It’s a simple photo but it says so much.  From left to right you see the face of Iran, Libya, US, Germany, Poland and Switzerland.  I love it.  Six people, six countries represented.  And, we came together as a group wanting to tour the historic center of Dresden and learn from our guide who was a wealth of knowledge.  Claudia, our guide who is pictured in the middle, was sixteen-years-old when the wall came down.  Take that in for a moment.  Think of the transitions she has experienced in her life.  Who better to guide us?

And, because we were such a small group we were able to ask questions and not only learn about Dresden, but briefly learn about each other.  Unlike our tour of Berlin, all of us were keenly interested in the history of Dresden – and beyond.

The History of Dresden

We knew nothing about Dresden, Germany before arriving other than it was supposed to be a charming historic city set on the River Elbe; a good destination to continue our route through Germany on our way to Austria.  What a treasure we found.  It’s a modern day reconstruction of a city devastated by war – the city was firebombed on the night of February 13, 1945 – and under soviet occupation for 45 years.  That’s a lot to overcome in such a short period of history.

Where Fairy Tales are Told

When one first crosses the river walking toward the historic center, it’s as if one if walking in to the land where fairy tales are told to small children; of castles and great clock towers that reach to the sky.  Pass through the arched walkway of the castle, and again, it’s like finding oneself surrounded by old world charm. Only, it’s not.  Dresden’s historic center is a vast reconstruction project intentionally designed to look old.  And, as Claudia explained to us, in another 50 years, all of the new … will look old again. 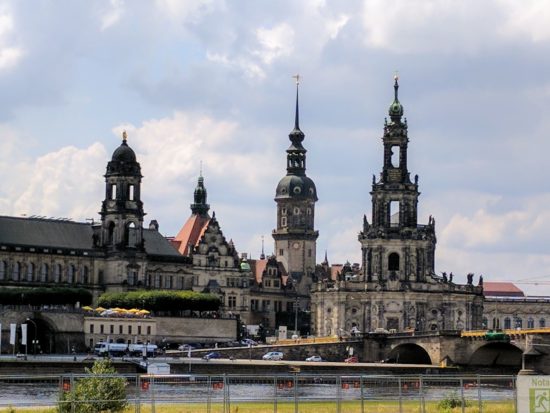 Dresden on the River Elbe.

The Reconstruction of Dresden

Sometimes, photos can say so much more than words, don’t you agree? I find this to be especially true with the reconstruction of Dresden. The first two black and white photos were shown to us by Claudia, the third photo we took today.  Standing there in the plaza with our small group and looking at the photos while Claudia shared the history, was a moment to appreciate.  It’s humbling to say the least. 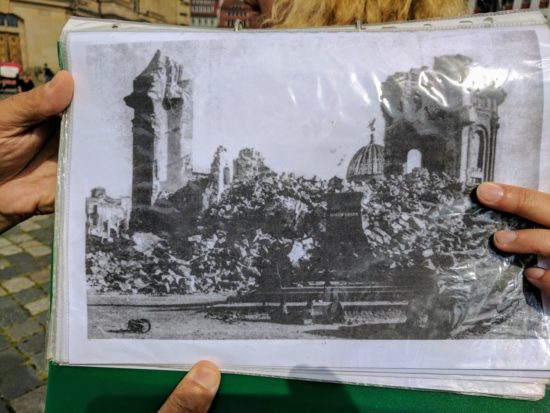 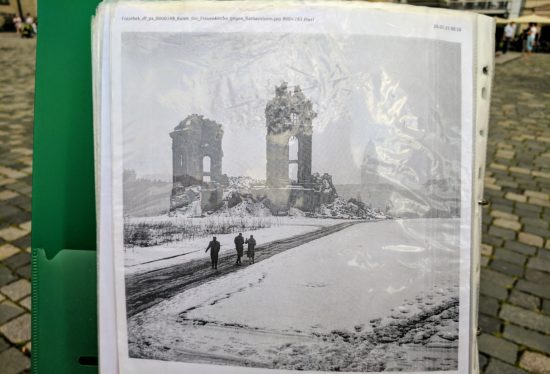 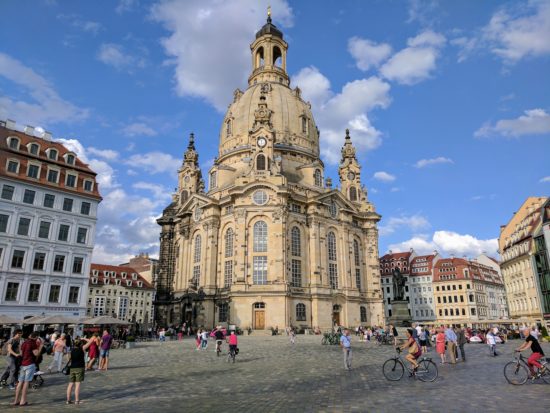 While in Dresden we toured the Green Vault Museum, which is considered to be Europe’s Jewel Box,  mostly because Rick Steve’s highlighted it in his video of Dresden.  Again, we knew nothing about the treasures that lurked behind the double glass security doors of the Green Vault, which is housed in the reconstruction of Augustus the Strong’s Castle.

Nothing can be carried in to the museum, no bags, no purses, no cameras, nada.  So obviously, I have no photos to share with you but you’ll just have to take my word for it.  It was phenomenal.  Ten rooms with treasures like you’ve never seen, nor can I describe.  But you can watch Rick Steves’ video, cuz you know, he’s Rick Steves and they let him take in his cameras.

How did the treasures survive the devastation of the war?  The powers to be at the time foresaw what was coming and they relocated all of the treasures to a fortress outside of the city.  The treasures were then confiscated (stolen?) and taken to Russia by the Red Army, but were returned to Dresden in 1958 and put on public display in 2004.  It’s really quite the story and if you find yourself in Dresden, tour the Green Vault.  You’ll love it, I promise.

We didn’t take our walking tour with Claudia until our 4th day in Dresden, so we had already visited most of the highlights.  But, walking with our group we gleaned all sorts of information, such as the story of this pipe organ in Dresden’s Catholic Cathedral.  When we explored the cathedral on our own, we were in awe.  But, when we visited the cathedral with the group, we learned the pipe organ had been removed for safe keeping and thus survived the bombing.  Stunning.  I don’t know how they managed that, but man it is impressive. 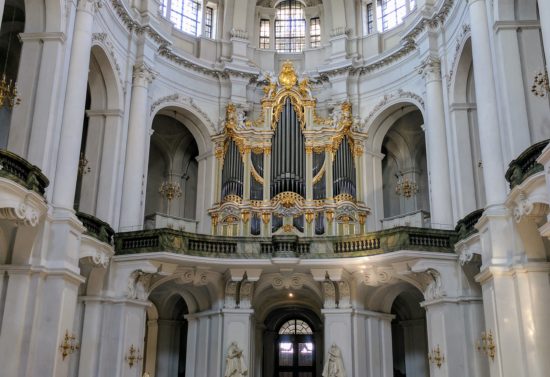 This organ was relocated for safe keeping.

As our visit to this beautiful city, a city of which we knew nothing, comes to a close we are grateful we pinned Dresden on the map and chose it as part of our time riding the rails with Eurail.  I don’t think it’s possible to visit the city and not come away a bit humbled with a strong appreciation for the people of Dresden. 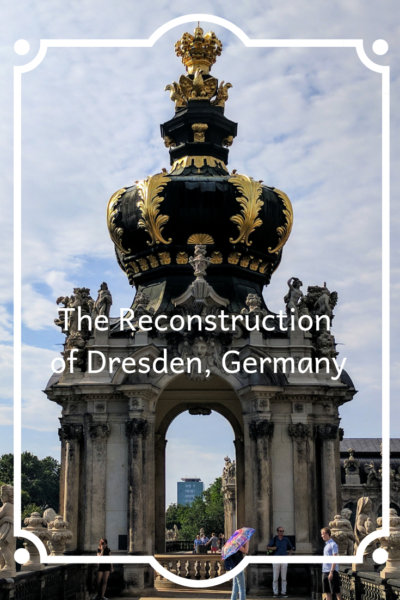 Seville: Day Trip to The Mosque of Cordoba
Share: