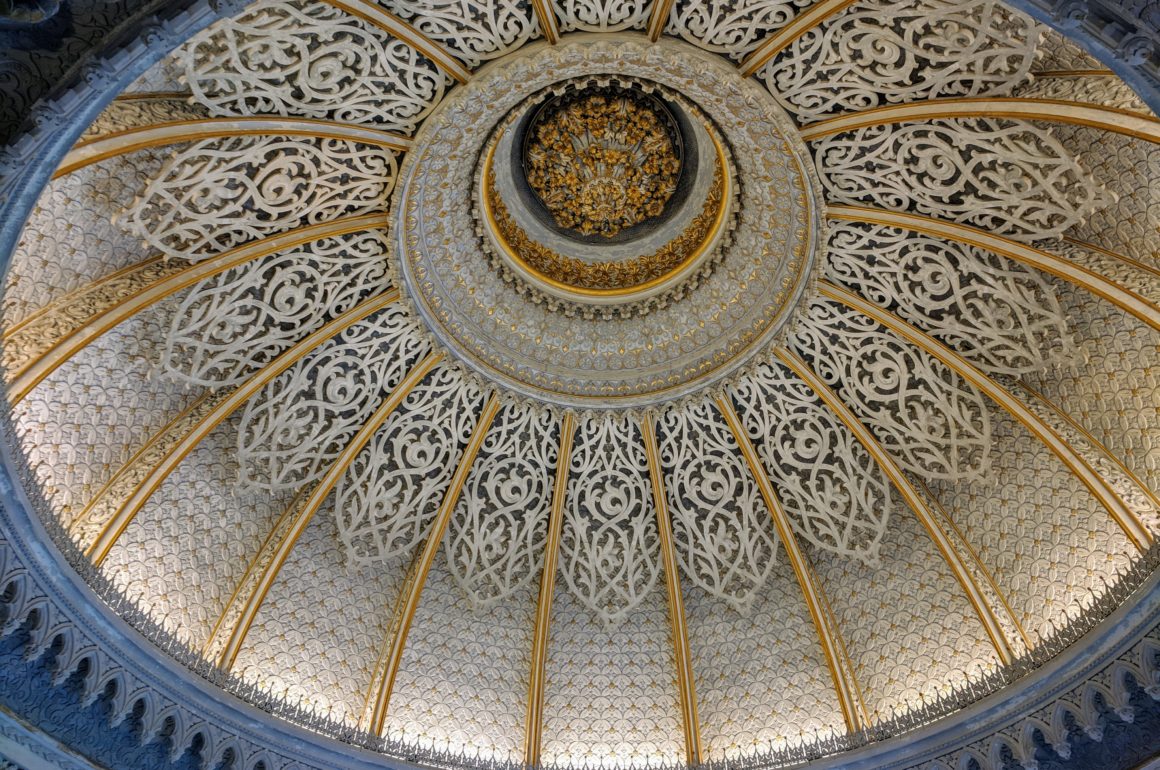 After we completed our 145-mile Camino Portuguese trek, we traveled by train from Santiago, to Vigo, to Porto, to Lisbon, to Sintra in one day.  It’s sounds a bit daunting but it all came together without a hitch.  In full disclosure we had the advantage of having previously traveled the same routes by train, but not all on the same day, so we knew it would work.  We boarded the 6:17 a.m. train out of Santiago and that afternoon caught the 2:13 p.m. train from Lisbon bound for Sintra.

Aside from booking our accommodations, we knew little about Sintra.  We just set our minds to visit at the end of our Camino, before we flew back to the US.  In my mind’s eye and from images I’d seen on the internet I knew Sintra was a small city in the forested mountains; a city from which fairy tales spawn.  What I saw from my window view, on the train, was not at all what I envisioned.  Not until the last few minutes on the train did I begin to feel as if we’d actually left Lisbon; the less than picturesque side of Lisbon.

From the train station it was an easy walk to the B&B we booked.  Actually, the little train station is so centrally located I think it’s fairly easy to walk to just about any accommodation near the city center.  Read any information about Sintra and you’ll find pretty much every source forewarns of trying to drive and park in Sintra.  We don’t drive in Europe, so it was not an issue for us, but the parking in Sintra is in fact very limited.

The roads to the palaces are steep, narrow and winding, and they’re overrun with full-size local and charter buses. 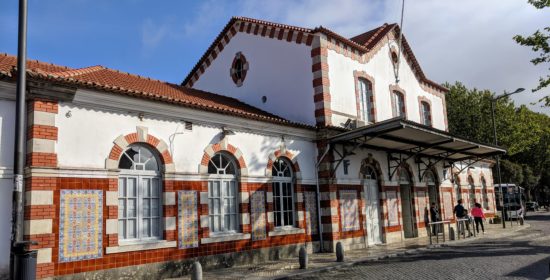 With no particular plans in mind, and because it was late afternoon and we’d been awake since 5:30 a.m., we simply let our feet lead the way as we explored the city center on our first afternoon.  Sintra, is definitely a tourist-driven destination. There are eateries and shops galore.

A UNESCO World Heritage Site, it’s easy to see why visitors flock to Sintra.  We highly recommend a visit in the shoulder and/or off season.  It was quite busy when we were there at the end of April, it must be overflowing with tourists in the summer months as Sintra makes for a popular day trip from Lisbon.

The Initiation Well, on the grounds of Quinta da Regaleira, had long intrigued me.  I can’t say that I have a bucket list, but visiting Sintra and seeing the well would have been high on the list if I had one.  At 88′ feet deep, the initiation well has 139 steps and it is a place of great mysticism.  Its purpose never had anything to do with water.  Rather, it was a place of initiation and secret ceremonies.  The owner/visionary of the estate was Antonio Augusto Carvalho Monteiro, who was known to be a Freemason. 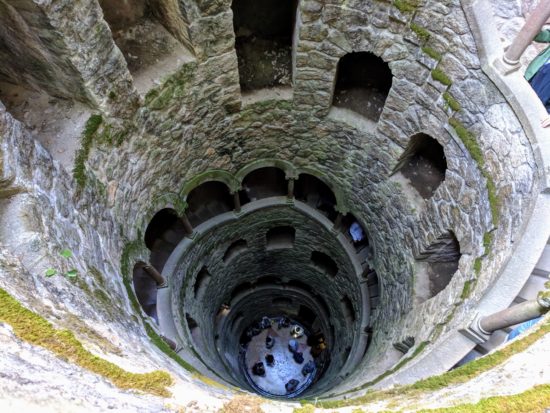 The Initiation Well is a place of great mysticism.

We walked down the stairs of the well and at the bottom there is a labyrinth of tunnels and grottos.  It’s all very intriguing and sets the stage for one’s imagination to run wild.  It feels as if one is in a chapter of a Dan Brown novel. The good news is one does not have to climb back up the stairs!  Visitors find their way out through the tunnels to a grotto and across a set of stepping stones in the water. 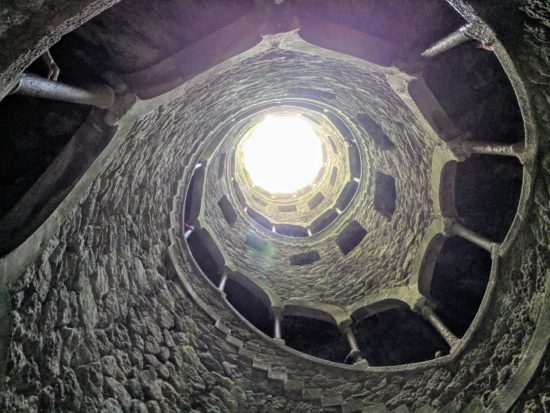 Looking from the bottom up.

The palace, the gardens and the small chapel are all extraordinary.  The architecture is incredible and all very symbolic of different philosophies.  Again, all very mystic.  As we toured the house and gardens I couldn’t help but feel as if there were a thousand stories still waiting to be told. 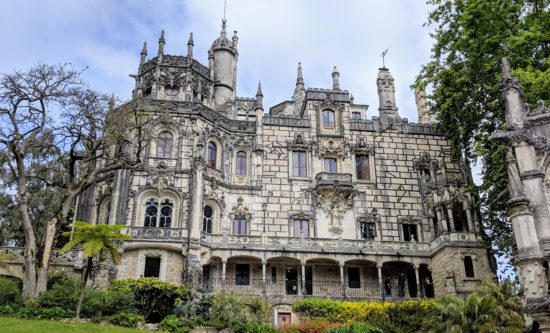 Our next stop of the day was the Palace of Monserrate. I have to say I think it may have been my favorite palace in Sintra.  It defied the imagination.

Standing outside the walls of Quinta da Regaleira, the question we asked ourselves was, “How do we get to Monserrate?” We had walked from the city center to Quinta da Regaleira but hadn’t thought beyond that. We spotted a tuk tuk, but the driver said she wanted $20.  Um?  No.  Not wanting to walk further, our only option was to wait for the bus.

I decided to approach the tuk tuk driver again and ask if she would please take us for $10.  She agreed and off we went.  Yes, she was trying to fleece us but she was super friendly and we enjoyed the brief ride.  *About 25 seconds in to the video you can see the size of bus navigating the narrow road.

There are so many highlights when visiting the palace, one of which is that it is a bit lessor known and further from the city center than the other palaces.  As a result, the crowds are not as thick.  At least they weren’t while we were there.  Another highlight is the stunning view from every direction, and of course the gardens.  You don’t have to be a garden guru to appreciate the layout and incredible detail of the acres of beauty.  Plants from all over the world grow in the peaceful park-like grounds of the estate. 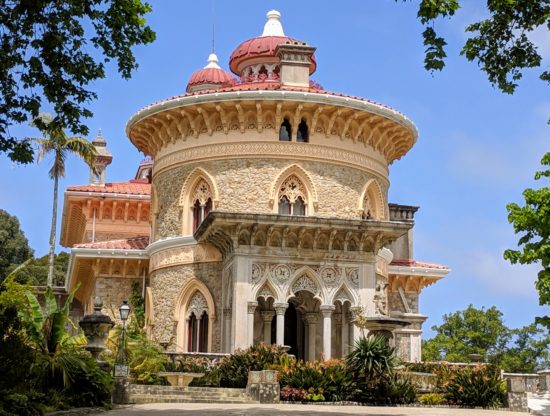 The Palace of Monserrate.

Visitors to the palace are free to roam the rooms of the palace at their own pace.  The story of the palace is told on printed wall banners in many of the rooms, with a wonderful selection of photos.  Since the home is, for the most part void of furnishings, the photos give visitors a glimpse of what the palace looked like as a family home. Also, there is an informative short documentary that plays continuously.  The story told in the documentary is an interview with an elderly gentlemen who lived in the palace as a young boy. 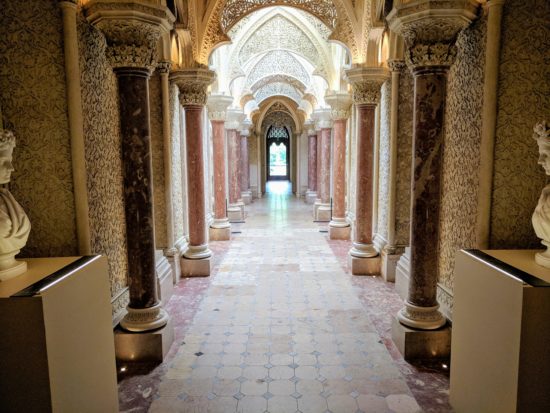 In the documentary the gentleman shares memories of he and his brother riding their bicycles up and down the corridors, which ran the length of the palace.

Built from the ruins of a former palace dating back to the late 1700’s, Monserrate was transformed (around 1860) in to the summer residence of Sir Francis Cook, an Englishman. The family, of the elderly gentleman in the documentary, lived in the house as caretakers when the family of Francis Cook was not in residence. 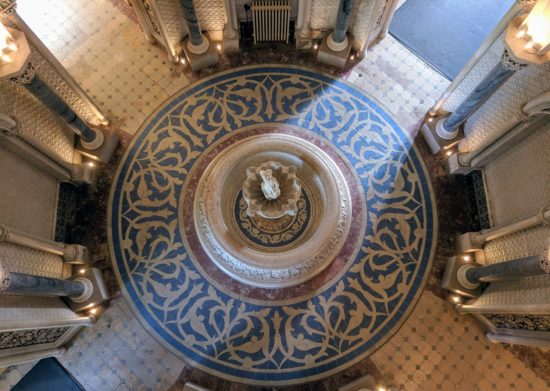 Looking down on the center of the palace.  You can see the four corridors branch out in each of the four directions.

The war(s) came and eventually the house became abandoned.  Monserrate was purchased by the Portuguese State in 1949. In 2000, Parks of Sintra took over management of the estate and renovations began the same year. The palace architecture, modeled in Arabic, Indian and Moorish fashion, is exquisite in its detail. 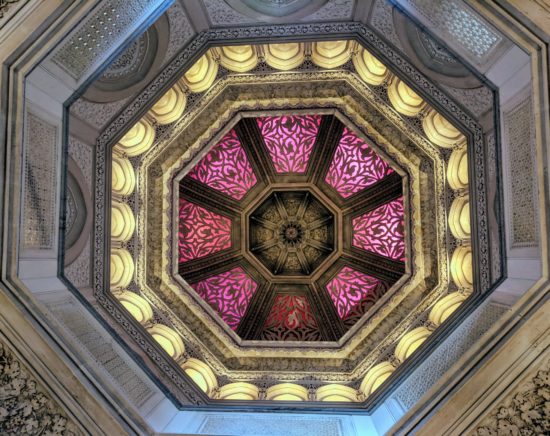 Looking up to the center dome of the palace.

Sometimes, when we tour castles, palaces and mansions it’s hard to imagine the estate as an actual home, usually due to the enormity of the place.  At Monserrate, even though every room was elaborate in its detail, it still had a sense of intimacy.  It wasn’t hard to imagine the palace as a home.

Our day was well-spent touring the two estates and we had a game plan for the following day.  But that’s a story still to come.  Stay tuned! 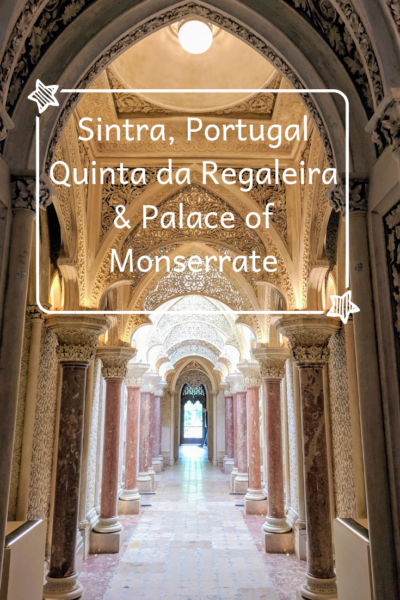