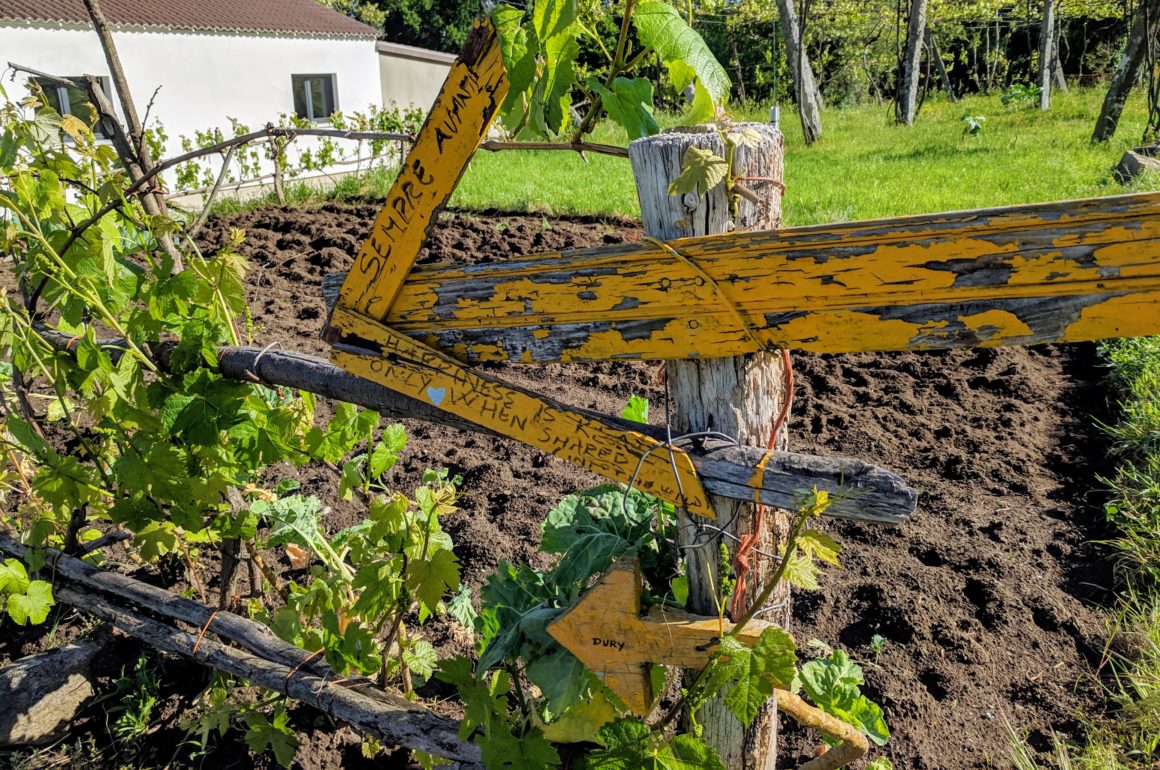 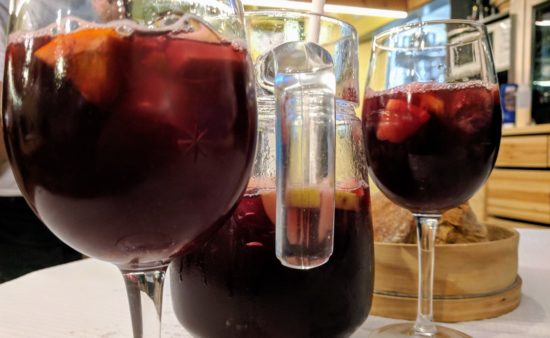 A well-earned pitcher of Sangria.

One of the best parts of walking the Camino (or any long trek) is that one develops a routine very early on.  With the Camino Portuguese being our second walk, and with Portugal Green Walks having done all the mapping and booking, as well as the daily schlepping of our bags for us, we took on the walk with confidence.

We certainly didn’t expect to be slammed with the weather we encountered, but we were physically prepared with as much rain gear as we could possibly wear.  Emotionally prepared, not so much.  But that’s the great thing about walking with a partner that knows you best. You can lean on each other and remind each other what you’re doing is in fact very special, even on the most challenging days.

From Caldas de Reis to Padron

With a clear weather forecast for the last two days of walking, we walked away from Caldas de Reis headed for Padron, Spain.  Padron.  Please tell me you know and love roasted Padron peppers.  Now, see, this is actually hilarious because I do not at all enjoy spicy food.  If I ever catch a super hot pepper I will probably die, but usually they are very mild.  So it was with great anticipation that I walked toward Padron even though unbeknownst to me I would be told the peppers were not in season.  Funny, because we enjoyed multiple plates of the peppers once we arrived in Santiago.  Go figure. 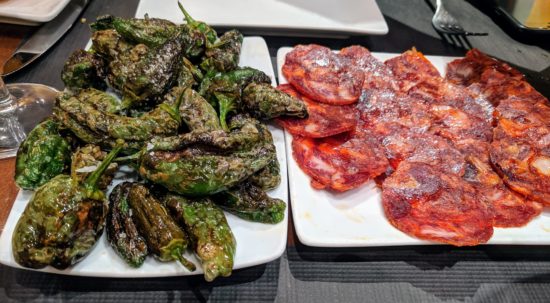 The trail wound it’s way through beautiful wooded forests, alongside peacefully flowing creeks, fields of wildflowers and of course because of all the recent rain, the trails were mucky and a bit tricky to navigate.  It was, for the most part, a really nice walk.

We walked to Padron on a Saturday.  Seemingly, every bicyclist within a 20-mile radius decided to ride the trail between Caldas de Reis and the Valga River, which was about an eight-mile (13 km) stretch, on that day.  The reason I mention it was a Saturday was because although there are many pilgrims who bike the Camino Portuguese, most of the bicyclists on this day were not pilgrims.  They had no gear, backpacks, etc.  They were (we believe) local joy riders out for a Saturday ride.

Of course it was certainly their prerogative to do so.  They live in the region and I suppose the trail could be thought of as theirs.  The big problem of course was the trail was also strewn with walking pilgrims and said trail was only maybe five feet wide and a mucky muddy mess.

It was interesting because for the most part the pilgrims on bicylces would call out Buen Camino or ring a bell to let walkers know they were approaching, but the local riders?  Well, the only term we could come up with was bicycle bullies.  They had no interest in deferring to the walkers. 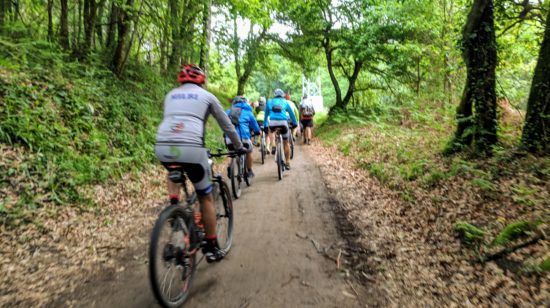 Local joy riders on the Camino.

We quickly grew tired of it and held our ground.  If they had to wait for us, so be it.  Oh, and they were probably riding at a speed of about 25 mph on the trail strewn with walkers. Yeah. bicycles bullies. Once they made it to the river the local riders turned around and rode back leaving more than a few pilgrims grumbling.

Legend has it the boat which carried the body of St. James from Jerusalem was tethered, in Padron, to a large stone.  The stone was (is) known as O Pedron (different spelling) and is housed inside the Cathedral of Padron. And, this is the tale of how the city of Padron got its name.  We were able to get up close and personal to the stone. 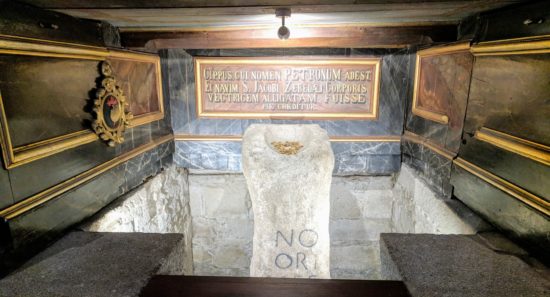 The stone is near the altar in the Cathedral.

I don’t remember the reason for the celebrations, but Padron was festive from one end of the city to the other with carnival rides and a large fast-moving bicycle race, as well as cultural dance performances.  Somehow, we managed to walk in to Padron on just the right day despite all the bicycles.

Our Final Day of Walking

I remember a phone conversation with my BFF about walking the Camino Portuguese as she and her hubby had walked from Lisbon to Santiago a few years earlier.  She told me that #1 the walk was beautiful and #2 the last day of walking in to Santiago seemed to go on forever. 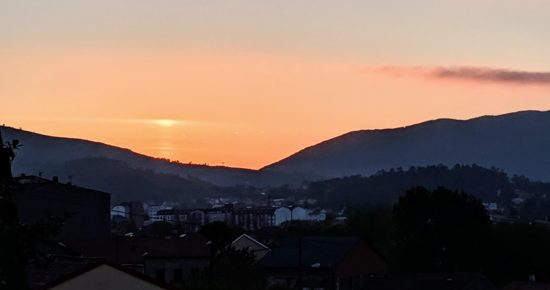 Sunrise on our final day of walking.

She was right.  It was a l-o-n-g walk at 16 miles on a very warm day with a lot of asphalt walking.  Technically, the walk from Padron to Santiago is 15 miles, but because our accommodations, in Padron, were about a mile off the Camino, we had to add another mile to our count for the day.  We could have waited for the shuttle, but it would have delayed our start by an hour.  Oh well, it’s the Camino.

I don’t think there is much more I can tell you about walking the Camino Portuguese other than to say I believe taking a long walk, with a partner who loves you, is something everyone should experience at least once in their lifetime.  We consider ourselves super fortunate in that we’ve been able to make it happen twice.  We wouldn’t be at all surprised if a third walk presented itself one day.  Never say never, right? 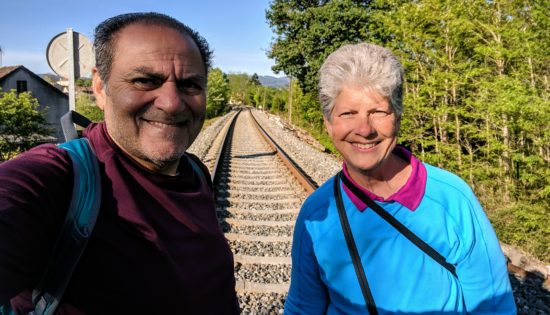 One last railroad selfie on day 12.

Once we crossed the international bridge in Valenca and started walking in Spain, the Camino became more busy with pilgrims.  Just like on the Camino Francis, when a pilgrim completes the last 100 km of the journey to Santiago, said pilgrim is rewarded with a compostela, the certificate of completion.  It’s the same compostela a pilgrim will earn if said pilgrim has completed the entire route, or a significant portion thereof.  For example, we walked 145 miles (233 km), the pilgrim who walked 62 miles (100 km) earned the same certificate we did.

There are those that think this practice isn’t at all fair, but my guess is it’s a practice that allows all pilgrims to earn their compostela, whether they come from far or near. 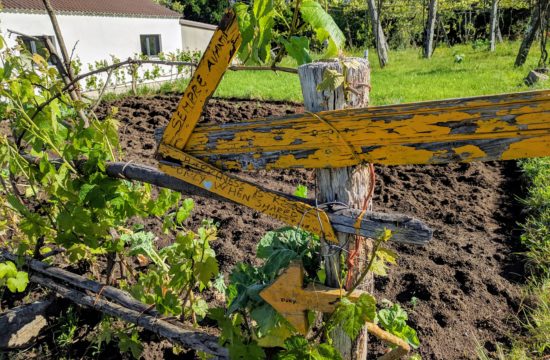 Bruised and battered, but still pointing the way to Santiago!

There is one thing that bothers me way more than the rule about earning a compostela. The officials absolutely refused to write my name, Patti, on my compostela under the guise that Patricia is the Latin form of my name.  I went through the same ordeal in 2015, (at great length) and managed to convince those officials to write, Patti.  No such luck this time. They were steadfast in their resolve and apparently, I was not.   Grrr….  Oh well.  It’s the Camino. 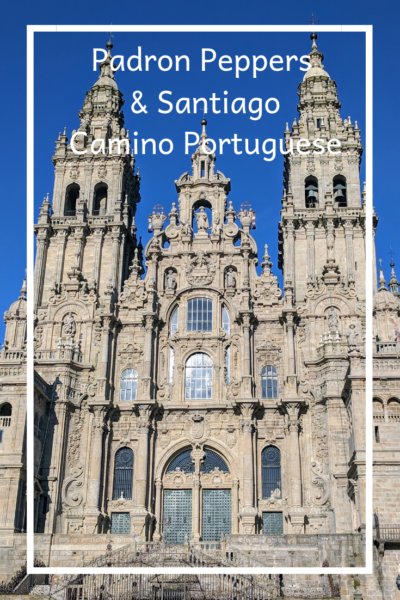