I’m looking at the time and realizing it has been 12 hours, almost to the minute, since we rolled onto Interstate Highway 5 this morning.  And although we logged nearly 650 miles we are not where we thought we’d be at this time.

But back-up, last night as we watched the evening news we paused the show and I traced my finger (on the t.v. screen) along the route we had hoped to take across Nevada, Utah, Colorado and beyond and discovered that Mother Nature and her nephew Jack Frost were wreaking havoc right where we hoped to land, Arches National Park near Moab, UT.

Now, here’s the thing, we’re not afraid of cold weather, but there comes a time when you have to heed the warning and call it a day.  According to my friend, Mike who lives in Reno, NV, we made the right call as he described the weather as miserable.

As a result, this morning instead of heading east we drove due south, nearly the entire length of the state of CA.  Ashland is just 15 miles north of the CA/OR and we are now in Santa Clarita for the night.

The Length of Hwy 5

You may be thinking why would they drive so far in one day, but if you’ve ever driven Highway 5, you know of what I speak when I say Highway 5 is long, straight, boring, smelly and mind-numbing.  But, it is also the most direct path from point A to point B.  We have driven the length of CA (or portions thereof) more times than I care to count and actually, the last time we made the drive from San Jose to Ashland, I swore it would be the last time.  But thanks to Mother Nature and her nippy nephew, here we are again.  It was a l-o-n-g day, but we wanted to just get it out of the way. The perk of the day though is that we are back in the land of In N Out! 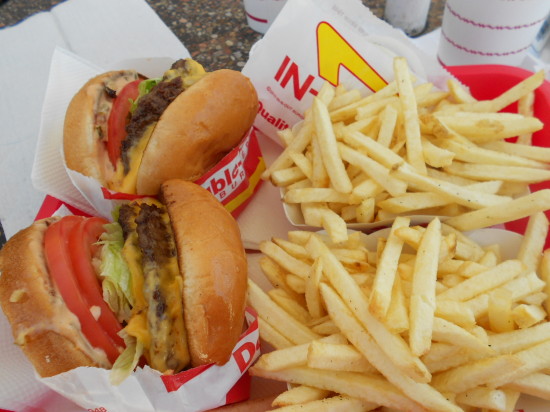 If you’ve been – you understand

So even though we are not where we thought we’d be at the end of day 1, in the morning we’ll awaken to the happy fact that Hwy 5 is behind us and we can be on our way east, via Interstate Hwy 10. When we get to Texas, we’ll decide (actually Mother Nature will decide) if we can then pick up our original route by heading northeast or continue along our southern way.

At the end of the day, it’s all good and that’s one of the things I love about an epic road trip;  you just never know…