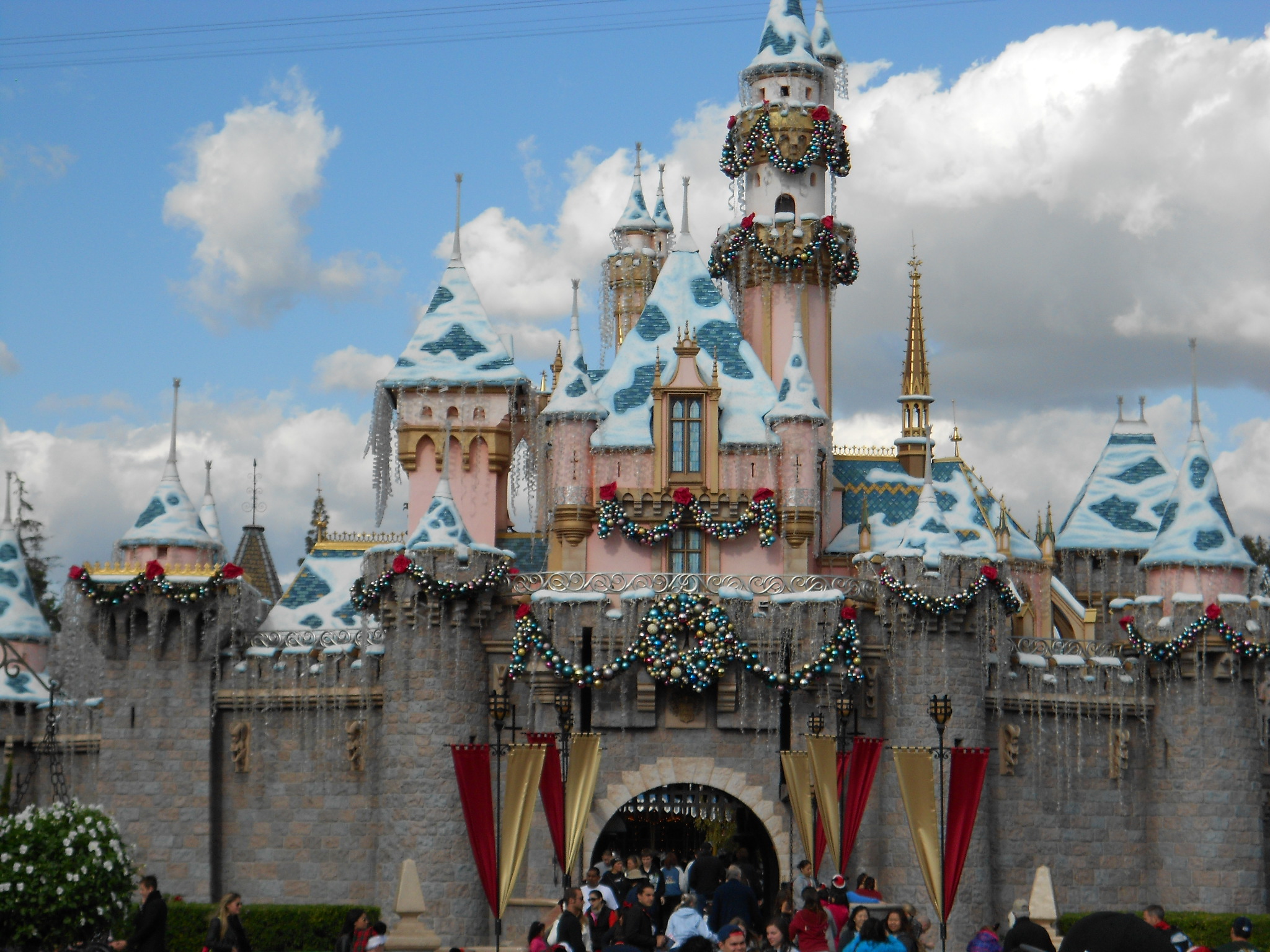 After our marathon drive from southern Oregon to southern California, we awoke to blue skies and just a slight chill in the air. Guess what? We were just one hour north of Anaheim, which, if you don’t know is home to Disneyland.

There is something about Disneyland that makes it just about impossible for me to miss out on an opportunity to spend a day in the Magic Kingdom and with the park all decked out in holiday goodness, we decided to take a day and have some fun.  And that’s exactly what we did.  To see more photos from our day, please browse our Facebook album. 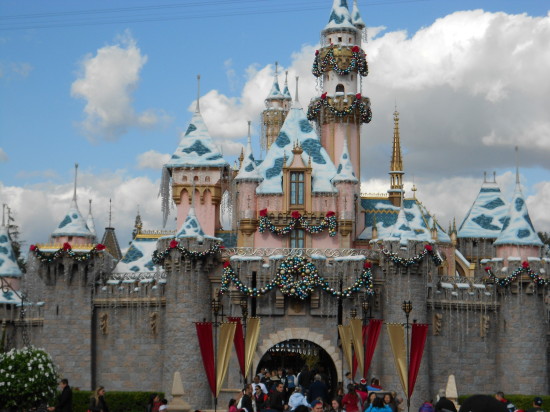 Cinderella’s Castle decked out for the holidays

Spending a day in Disneyland is a little like running a marathon; not that I’ve ever run a marathon, I just usually wake up the next morning feeling as if I did.  Having that much fun is exhausting, especially when you only have one day and you want to capture all of your favorite moments in the park.  We are seasoned Disneyland visitors but if you’ve never been, I would highly recommend a minimum of two or three days for your first visit.  In this way you can Park Hop between Disneyland and California Adventure, which is right next door.

A Sense of Style

After a day of marathon driving followed by a day of marathon fun behind us we slept the sleep of the exhausted. We hit the snooze button multiple times this morning before dragging ourselves out of bed to begin another day on the road.  Today, we drove about 350 miles from Anaheim, CA to Phoenix, AZ.  This is a drive we have made many times. It’s been at least five years since the last trek so it felt a little like visiting an old friend. We actually appreciate the desert; it has its own sense of style. 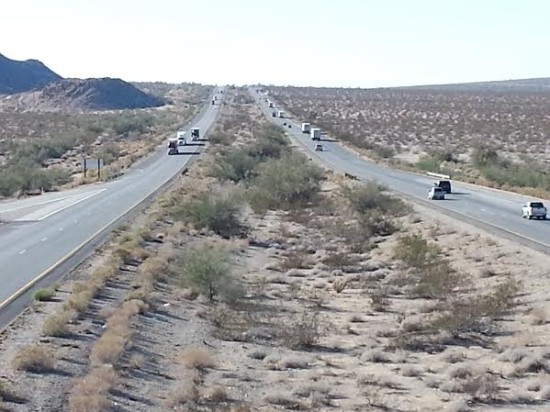 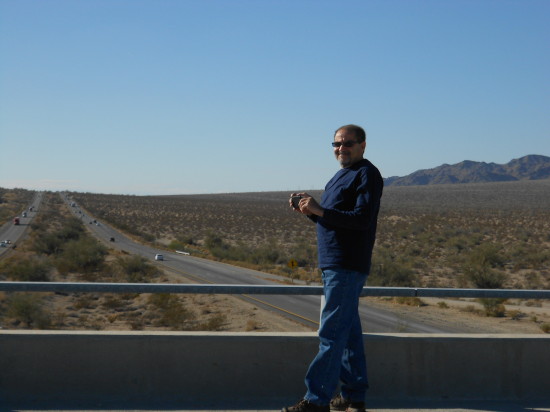 The Woes of Car Sickness

When it’s my turn to be a passenger I am left with nothing but my eyes and imagination. Unlike Abi, I get ridiculously car sick so I cannot read, write or sleep.  I stare out the window and try to find anything that will stir my imagination.  I think about how it must have sucked for the ranchers who tried to scratch out a living in the desert. Or, when we pass by an abandoned mud/brick/rock house I make up little stories about who built the house and why in the hell they built it in the middle of such an unforgiving environment.  When you really pay attention to what you’re seeing, it’s pretty cool what you find. 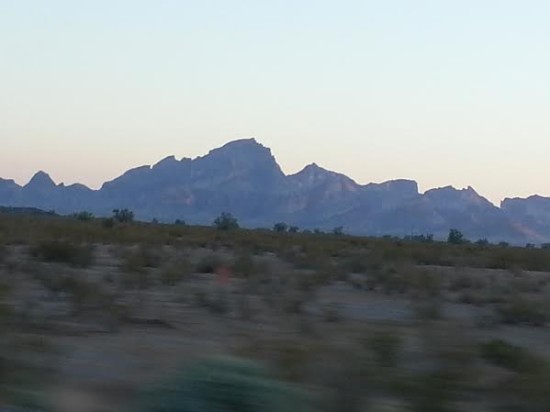 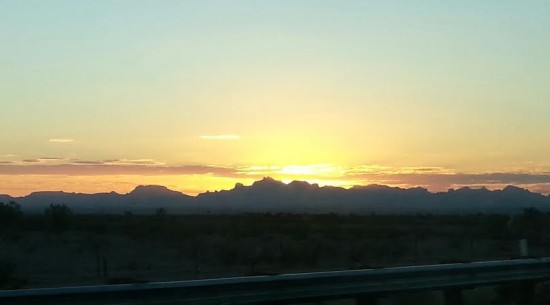 Desert sunset as seen from me twisting around in the seat to capture the moment out of the back side window.

When I’m on the brink of total boredom I can stare at Susie GPS and watch our progress on the map.  But only for a few blinks at a time or nausea here I come. 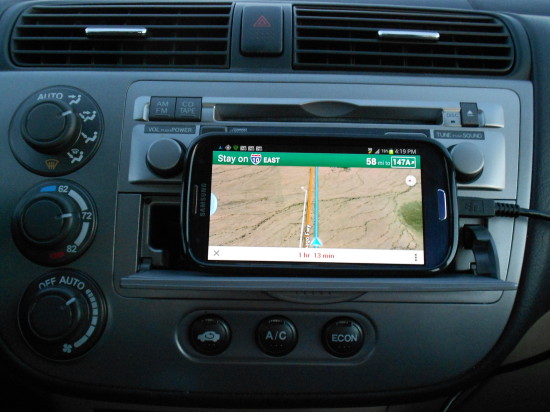 Abi’s phone which serves as our GPS. Technology is an amazing thing.

Day 3 on the road has come to an end.  Tomorrow, it’s on to Tucson, AZ where we will catch up with a friend of ours who is on a 2-year RV trek around the country.   As we continue eastbound we are ever vigilant of the storm front moving through the mid-west and how it may impact our path. More importantly, we continue to be inspired by the journey itself.