One thing I may not yet have mentioned about the city of Porto is the hills.  They’re a bitch. And, there are certain hills that just kick my butt all the way up every time we make the trek, but exercise they do provide.  To get from the city center and/or the river front back to our flat, we have no choice but to trek those hills.

Well, that’s not quite true.  Porto has a sleek and efficient metro system, but it provides very little in the way of exercise.  It can also be noted that Porto is built on solid rock and as such the metro system only traverses some parts of the city, and mostly above ground. 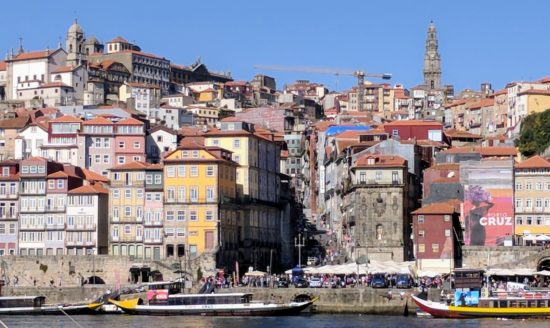 The riverfront. I can’t tell you how many times we’ve trekked right up this hill, and this is just the first leg of the climb.

The Dried and Salted Cod

Being half Portuguese – my mother was Portuguese – I find I am loving this culture that serves both rice and potatoes with pretty much every meal.  It’s a starch-filled culinary delight.  But, with that being said, I am not a fish eater and if you’re in Portugal, it’s all about the fish. Especially, the dried and salted cod, Bacalhau, which one can find in pretty much any food shop in Porto.  I’ll even go so far as to say in all of Portugal.  It’s well-regarded as a local favorite and with the upcoming Christmas holiday, the shelves are bursting with dried cod. We’ve been told Bacalhau will be served at 80% of Portuguese Christmas Eve dinner tables.

Bacalhau. Dried and salted cod. The pungent smell is beyond description.

The Portuguese people eat well, and as we discover more and more authentic – and oh so yummy – restaurant choices, we definitely need those hills to combat the caloric intake.  Along with generally not liking or eating fish, I am also allergic to shellfish so I tend to just stay away from all of it.  But, Abi does like the occasional tasty fish meal.  On one of our marathon exploratory walks in the city, we happened upon a small restaurant, Migalhas, tucked in along a small side street.  It was a lovely respite and Abi was served this well-seasoned grilled sea bass. 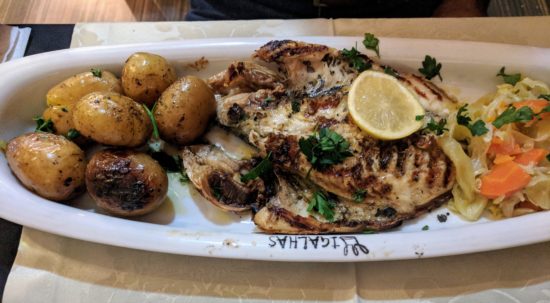 Grilled sea bass.  Note the number of potatoes on the plate. For that matter, note the size of the plate!

Based on our dining experiences, Portuguese food is not what we would define as light eating.  Far from it.  Portions are generous, seasoning is spot on and as I said, potatoes and rice are served with pretty much every dish.  Our next foray into authentic food here in Porto was at a charming little bistro, A Tasquinha.

We had no idea what to order, couldn’t really read the menu and didn’t think to ask for an English version.  Sitting next to us was a couple who had just been served what looked to be chicken and vegetables for two so when our server came to take our order we pointed to the table next to us and said, “For two, please.”  And, this is what we got. 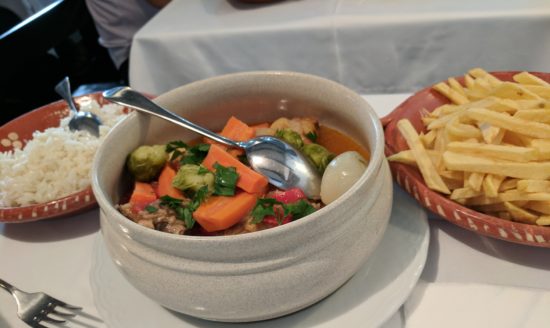 Chicken and vegetables in a casserole for two. Yum!

What’s Not to Love?

We ate until we could eat no more and without exaggeration we licked the plates clean.  That was our first serving of side-by-side rice and potatoes and we were hooked.  If I remember right we paid a whopping 13€ for the meal.  What’s not to love?

We find most often the accompaniment of cabbage and carrots served along with main courses.  I’m sure it has to do with the cost factor, but as a flavor profile it works for me because I happen to love cabbage and carrots and there’s just a hint of seasoning along with salt and pepper that makes these veggies particularly yummy.

When we visited Porto in 2015, we had a mere 5 nights to explore the city and oh boy did we do it justice.  So much so that we have found being back in Porto we now have the gift of just being able to explore at random.  We had a bit of been there done that, so now we just get to check out all the little nooks and crannies for which most travel experiences don’t allow the time.  You know, like finding the authentic dining experiences.

We have Rick Steves to thank for one of our amazing meals.  I packed along his Portugal travel guidebook and finally got around to opening it to the Porto chapter only to find that yep, we’d been there, done that.  But, he did recommend dining at Abadia – Abbey of Porto Restaurante.  Funny thing happened as we approached Abadia, which is located on a side street and not altogether easy to find, Abi realized he and our son had dined at Abadia when the two of them took a self-guided port wine tour of the region in 2010.

We’ve found many of the Portuguese menus offer similar dishes, but there are subtle differences in the taste based on the skills of the chef.  Abadia did not disappoint.  As a matter of fact it may have taken the lead in our ever-growing list of top choices.  At first Abi was going to order fish but then decided he’d venture down another culinary path and he chose the kid goat in a casserole.  He took one bite and uttered, “Yum.” 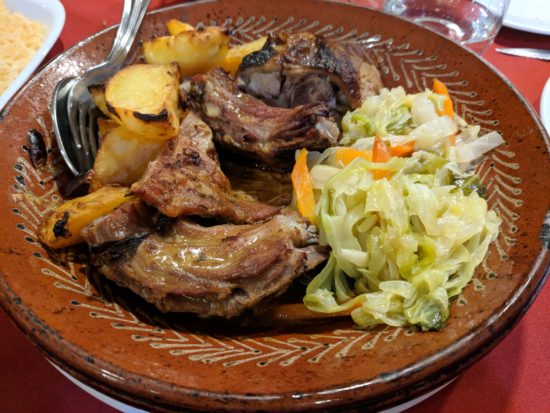 Kid goat in a casserole. Abi is a far more adventurous foodie than I am, but you probably already figured that out.

I on the other hand chose the grilled pork chop with garlic and just like Abi, I took one bite and knew I had chosen well.  Our meals were delicious.  Abadia is seemingly a huge local favorite.  The restaurant seats 280 people and our server told us that on Saturdays, they serve 1,200 – 1,500 meals.  Needless to say we’ll enjoy our meals on weekdays. 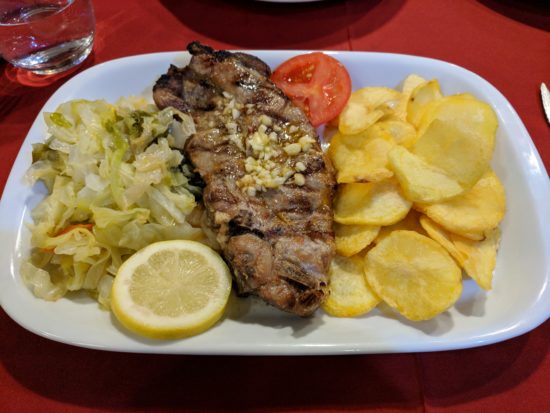 Everything is Better With Butter

So yes, we’ve been eating well.  Maybe even a little too well, which lends itself to trekking the hills of Porto. We’ve even tried vegan introduced to us by our friends Amy and Andrew from Our Big Fat Travel Adventure.  They’re vegan and they recently spent a month in Porto.  On one of our outings together they introduced us to a vegan buffet restaurant, which we found quite yummy.

Contrary to everything I just wrote above, I’ve often thought I could easily become a vegetarian. I couldn’t do vegan because I love me some cheese and butter.  As my idol, Julia, always said, “Everything is better with butter.”  It’s a good thing though to expose our taste buds to new culinary experiences such as a vegan meal and goat in a casserole.

But, I draw the line at fish… and mushrooms. 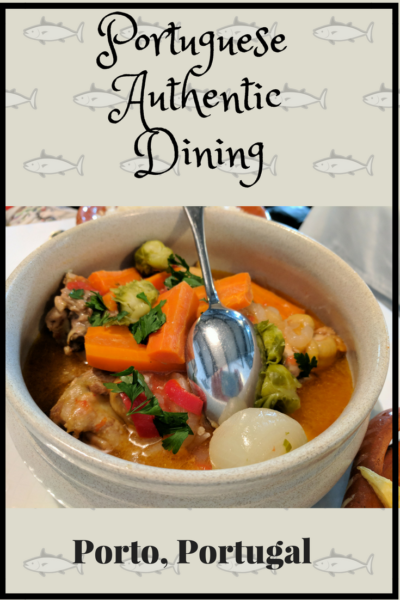 To Tour or Not To Tour, What’s your Choice?
Share: