Mr. Rogers: Look for the Helpers 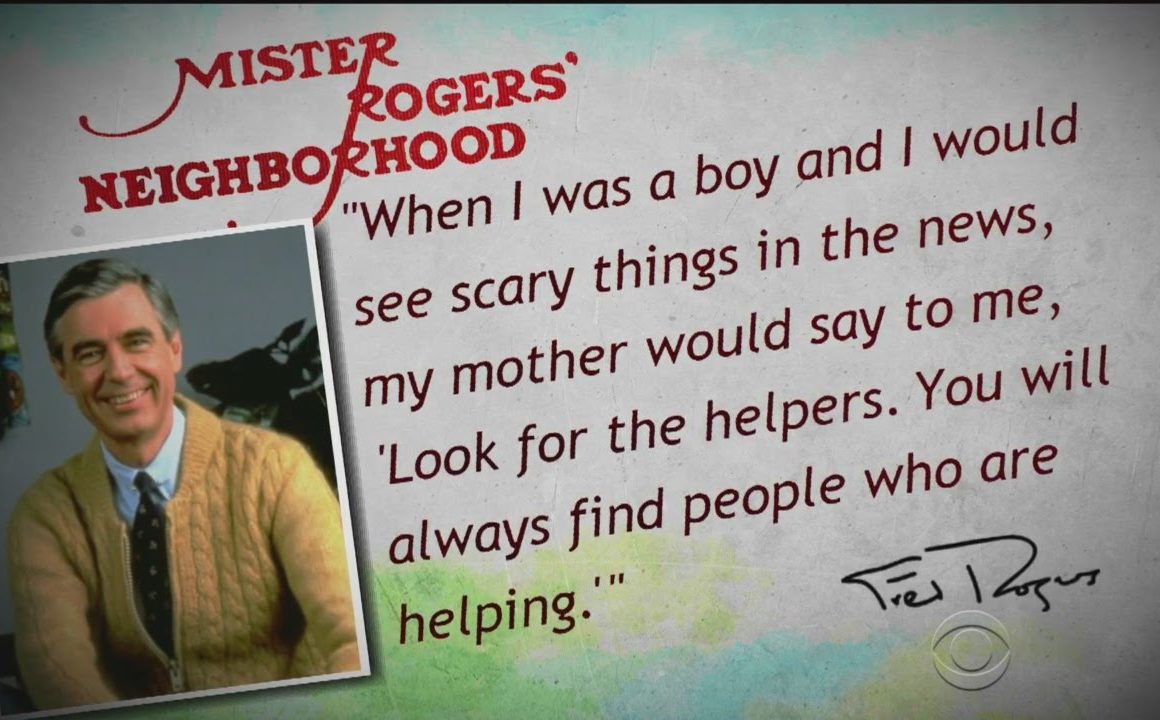 If ever the world needed Mr. Rogers, now is the time. We could use his sense of calm, sincerity and wisdom. The world seems to be caught in the antithesis of Mr. Rogers’ goodness.

As the weeks led up to our European adventure, we had let all of our food supplies dwindle so there would be little left in the fridge and pantry. Once we cancelled our trip (about 10 days before the virus onslaught) we restocked our fridge, freezer, and pantry to maximum capacity. It was fortuitous as little did we know what was to come.

With much thought and purpose, we chose to self-isolate even before our home state of Maryland closed all non-essential businesses and schools, and encouraged everyone to stay at home and practice social distancing.

Because we provide daily care, three days a week for our toddler grandson, we chose to isolate ourselves, as did four other family members. Since our son and daughter-in-law are working from home indefinitely, our familia isolation allows us to continue child care.

As a couple we literally have not stepped foot inside a pubic or commercial building in 13 days and our resolve not to, is solid.

While Others Step Up

It’s an interesting phenomenon, isn’t it? When crises arise, people seem to alter their behavior. While others step up in a positive fashion, there are unfortunately, those whose true colors show through in a less than flattering way.

For example, toilet paper. Is there anything seemingly more ridiculous than people hoarding toilet paper? Where did the notion of needing 100+ rolls of toilet paper take hold? Or, the young man who thought he had the genius idea of collecting 17,000 bottles of hand sanitizer, expecting to sell it at a profit. Profiting from the needs of others in a crisis? True colors?

Or, the young man who arrogantly declared on camera that if he caught the virus, then he’ll get the virus but it won’t stop his partying. When we watched the news clip my thought was, “Oh, your mother must be so proud.” His apology soon appeared on Twitter.

Perhaps the Most Despicable

Perhaps the most despicable, far more so than hand sanitizer hoarding, was the recent proclamations by loud obnoxious public personalities (here in the United States) proclaiming that those who are 60+ in age should stop isolating, return to work and play, and take one for the country.

I almost didn’t mention these stories because they are despicable, but I think to find the good in people, we also have to be aware of the other side to keep a balanced perspective. I’m not including links to the stories though because I don’t want to send traffic to them, but a quick Google search will answer any questions.

We’ve been quite content in our self-imposed isolation considering we are beyond fortunate in having a home and food in the pantry. More importantly, as we are retired we do not have to worry about losing jobs. The best thing we can do is stay home and help #flattenthecurve.

The headlines of the past couple of days though have triggered an inner anger. When did we become a society in which seniors and the elderly are dispensable? The more I thought about it the angrier I became. Irrationally so because I know the voices of the despicable are just that, despicable. Maybe it’s the fact that millions of people fall victim to the spewing that fuels my anger. I say fall victim because surely they can’t buy in to the rhetoric. That would be too much like drinking the Kool-aide. Right?

And, that’s where my head was when I thought of Mr. Rogers.

Thank you, Mr. Rogers, for reminding me that I can’t give in to anger. If I do I won’t remain emotionally healthy as we make our way through what we believe will be months of isolation. If you think about it, it’s a small price to pay for staying healthy… and alive, this whole isolation thing.

I’ve been th​inking about the helpers and the people who are trying to make the best of a difficult situation. The health care workers, the delivery drivers, neighbors helping neighbors, etc., Even those who just make eye contact and smile, say hello or make us laugh.

Look for the Helpers

Our friends, Frank and Lissette with The Travels of BBQ Boy & Spanky were traveling in Spain when a nation-wide lockdown was imposed. They were fortunate in that they found an Airbnb with a hostess who graciously invited them to stay as long as needed. Their hostess is definitely a helper.

To pass the time, Frank and Lissette decided to draw self-portraits. I found them hilarious. They were my helpers on a day I needed to let go of my anger.

Helpers in the Headlines

Cities are shutting down, businesses are closing their doors and unemployment is understandably soaring. And yet, we don’t see enough good news stories. Usually, they show up in the last three minutes of the nightly news. It’s up to each of us to look for the helpers.

In order to comply with city mandates, Chef Jose Andres closed all of his restaurants in Washington, DC. A few of the sites have been transformed in to community kitchens that are now serving lunch to those in need.

I had never heard the name Kent Taylor until yesterday. He is the Founder and CEO of the Texas Roadhouse restaurant chain. He has stepped up and offered one year of his salary to cover the payroll of the hourly wage earners who work for the chain.

Forbes published a list of 50 companies that are stepping up in time of crisis. There is a wide range of what is being donated, but it all makes a difference. It all helps.

These are the Helpers

These are all of the helpers to which Mr. Rogers referred. Big or small, they are helpers. If you look for them, you’ll surely find them.

It’s Too Big For Me

It’s both heart wrenching and terrifying to know the depth of suffering around the world; to know it will all get much worse before it gets better. A friend of mine said it best when she said, “It’s too big for me.”

If we stay strong, block out the ugly and look for the helpers, we’ll get through this, and hopefully, come out stronger on the other side.

“When you look for the bad, expecting it, you will get it. When you know you will find the good—you will get that….”
― Eleanor H. Porter, Pollyanna