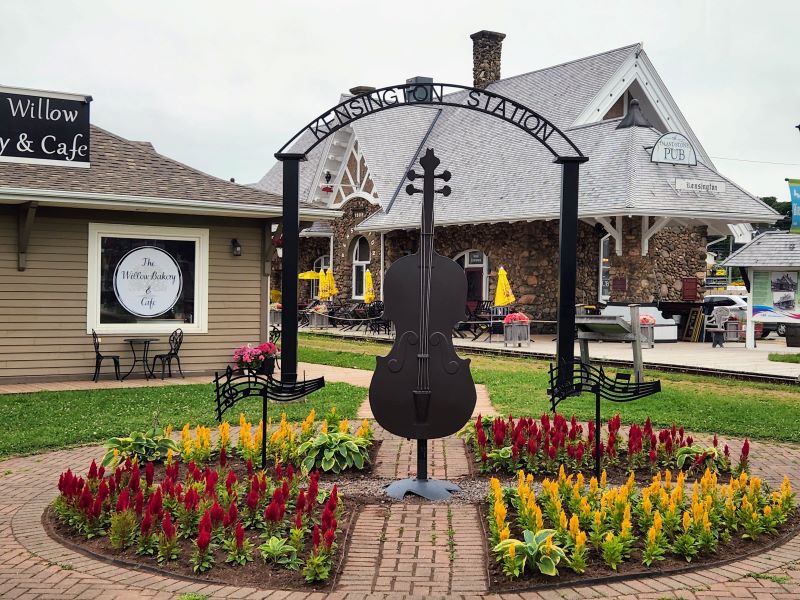 Kensington, PEI. It’s a small blink of a town with a 4-way intersection and a population of maybe 2,000. The neighborhood streets are lined with cozy homes and almost every home has an immaculate garden bursting with glorious colors. It’s the same all over PEI. Some, are extraordinary and we were in awe of the time spent in maintaining such a yard. Kensington is just a few miles from Summerside where we based ourselves for ten days while exploring the island.

We first made our way to Kensington because we love cinnamon rolls and we came upon a review of Mary’s Bake Shoppe. Clearly, a local favorite with rave reviews and we knew we had to go. Truth be told we were a bit hesitant because we tend to like cream cheese frosting on our cinnamon rolls. Mary’s rolls, according to the reviews, were naked.

Anyway, about Kensington. At first glance we didn’t think much about the town, it was the portal for good eats. But each time we went back we found something more to like about it. For example, the historic train station sits just a block from the main intersection and it’s a designated National Historic Site of Canada. Trains stopped passing through long ago and the station is now a restaurant, but the railroad tracks are still in place and there’s a train car permanently parked nearby.

For those walking The Island Walk and/or the Confederation Trail, the trail passes right through Kensington. After filling our bellies with cinnamon rolls, we picked up the Confederation Trail just across the road from the train station. By the way, there are several shops and eateries at the train station plaza. And, there are picnic tables where one can sit and eat cinnamon rolls, fried chicken and taters. Just sayin.

We walked a few miles on the Confederation Trail leading out of Kensington. It was rural, green and lush. A great place to walk off our rolls and lose ourselves in the peaceful surroundings. It had rained that morning so the sky was gray and the day was cool. Ideal for walking.

As we continued along we came to a side trail, highlighted by a wooden arbor. Curious, we turned right and came upon the beginning of the The John Hogg Public Forest Trail that crosses paths with the Confederation Trail. It turned out to be a beautifully well-maintained 1 1/2 mile loop trail. The land was donated by a multi-generational local family who maintains the trail. It was super pretty and we very much enjoyed the loop.

I’m not altogether certain how many times we either went to Kensington, or just passed through. PEI is surprisingly vast with miles of wide open picture perfect vistas. I can’t imagine exploring the island without a car, hence passing through Kensington as we returned to our base in Summerside from some point on the island. And, why would we pass through if we didn’t stop at Mary’s to pick up dinner, and of course cinnamon rolls for the next morning? Can you think of a reason? We couldn’t.

Walk Along With Us