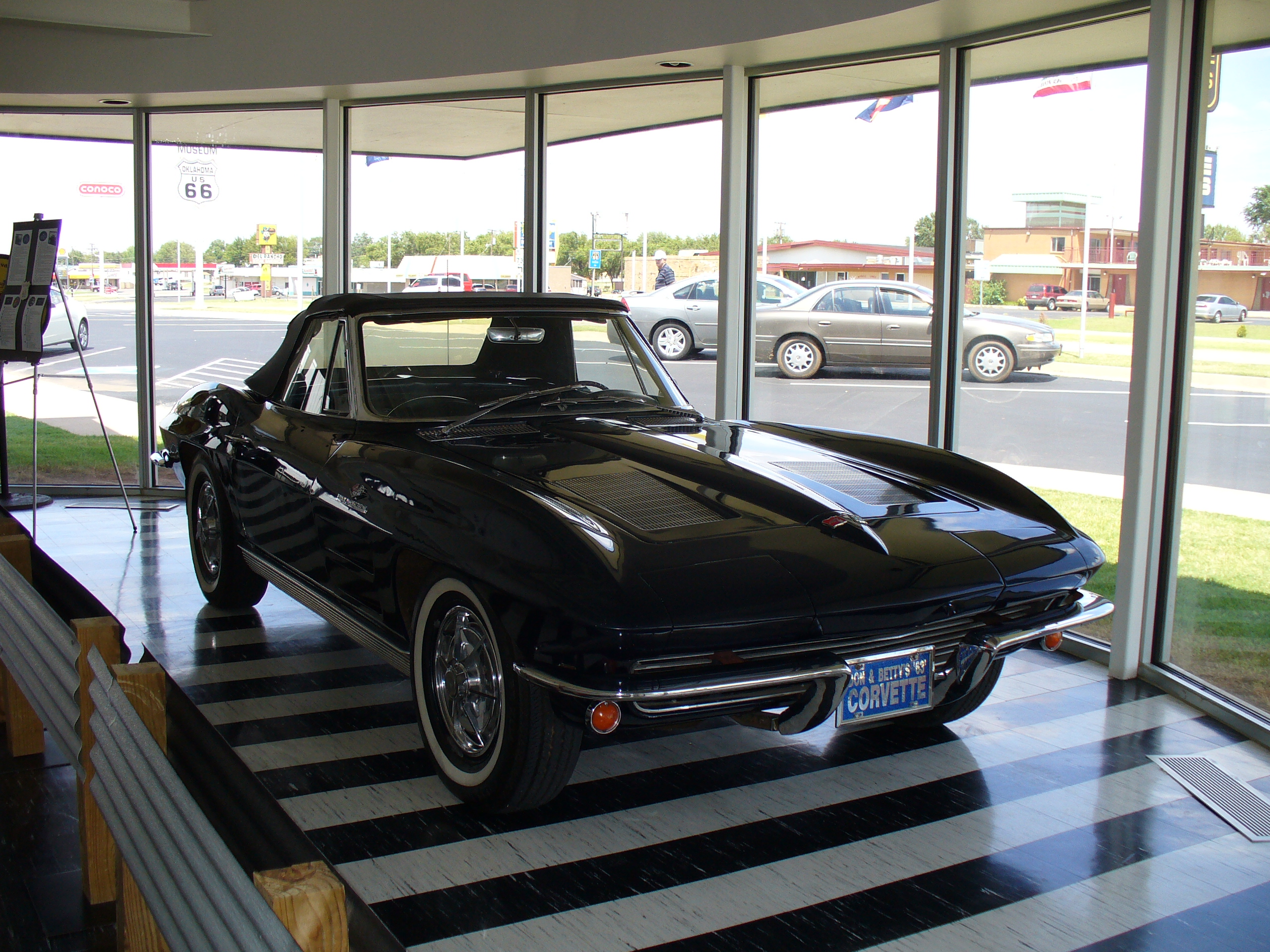 Leaving Oklahoma City we easily picked up Route 66 and followed it for quite awhile.  We happened upon, of all places, the Fort at El Reno which is on the Chisholm Trail and then we found ourselves in Clinton, Oklahoma.  Both unexpected stops, but both were well-appreciated.

If you love American history like I do, coming across an unplanned stop like Fort Reno is just a gift to your day.  Imagine standing where cowboys drove herds of cattle across the great plains.  It’s history!

Although there is a welcome center, you can’t access any other buildings.  The fort was built during the era of the Chisholm Trail; cattle herds being driven north to Kansas would stop for supplies at the fort. 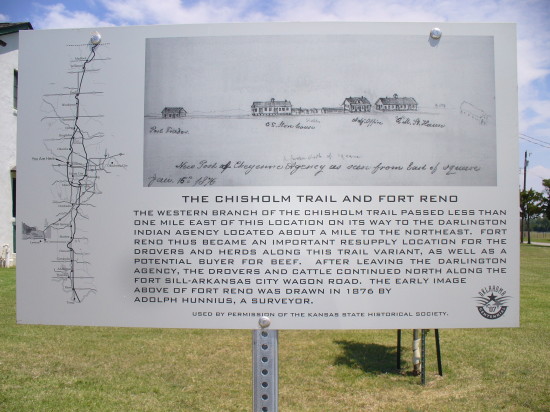 Chisholm Trail – the legend of a long ago era

The army kept the fort active until 1949 (I think).  We hung out for a while, needing a break from the road, and wandered the grounds, peeking in windows where we could and looked out over the vast dry prairie.  I tried to imagine myself on a cattle drive, with the trail, the dust, the heat, the smell of cattle and had nothing but admiration for those who rode the Chisholm trail.

All I could come up with was the thought of a sore backside, the stench of cattle and the affects of all of those men eating beans!  I probably would not have made a good cow girl, cuz, well, I like to live life on the cleaner side. 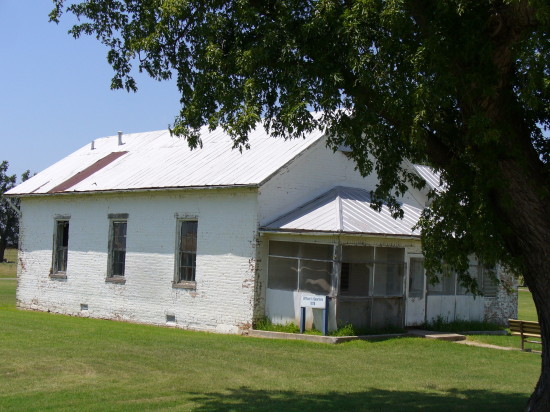 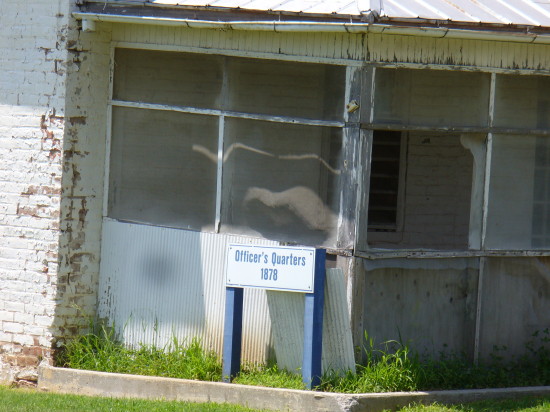 I wonder how much better the officer’s had it?

As we rolled into Clinton, Oklahoma around 2:00, we were really hungry and looking for a local mom and pop place to eat.  I popped in to a Route 66 Museum and asked the guy behind the counter where we should have lunch.

Without hesitation he told us to go across the street to Del Rancho Steak House.  As I thanked him and turned to leave, he said, “Oh, you have to pick up the phone to order, no one will come to the table.”  “Okay,” I said, thinking to myself – “huh?!” 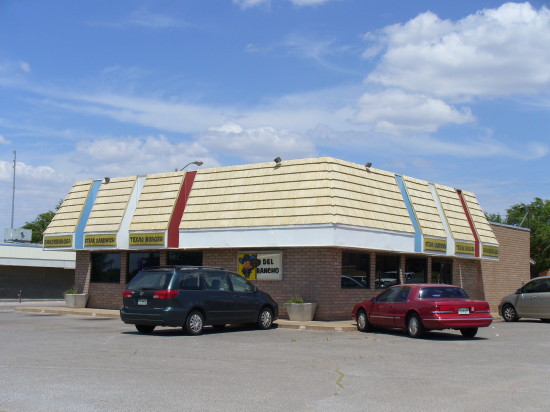 Don’t judge a book by its cover!

Just as museum guy said, all of the tables had orange telephones (just the receivers) and that’s how you placed your order.  Pick up the phone and someone takes your order.  Ya gotta love it, right?!

What was really funny though was that we could see and hear the person taking our order – he was just a few feet away from us.  While the food wasn’t 5-star it was good for burgers and shakes – and really, it was all about the phone.  It was just too much fun.  I said to Abi, “They could spruce the place up a bit” and he said, “Why?”  Good point, why ruin a good thing – even if the place hadn’t had a good scrubbing in forever. 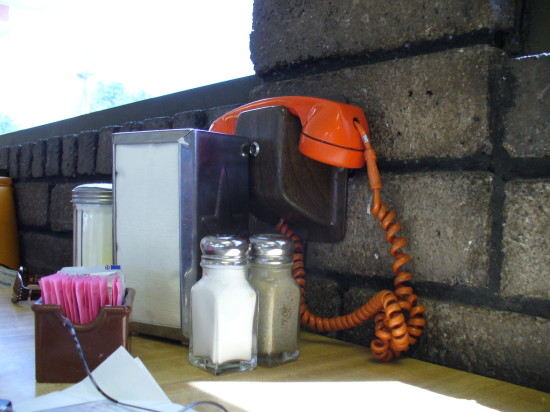 We went back to the museum and ended up spending about an hour because they had such an extensive display of 66 memorabilia, sectioned by decades.

A highlight was a movie showing the actual footage of the construction of the Route – really interesting.  So many states have Route 66 associations that are actively trying to keep the era of the route alive.  Some are more successful than others but I’m guessing it has a lot to do with the spirit and efforts of the volunteers.   I can’t help but feel like a member of an elite club now, it’s as if we’re in the know cuz we’ve done the drive. 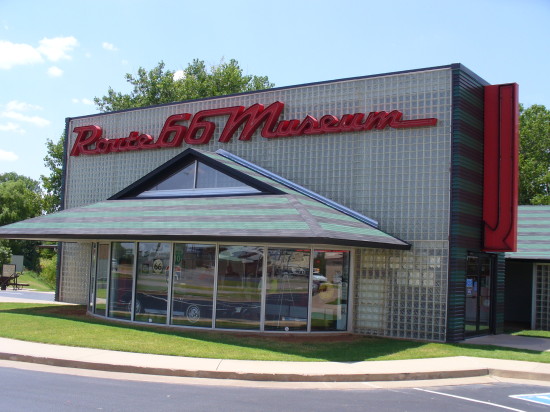 Route 66 Museum in Clinton, OK – one of the best museums we found along the Route 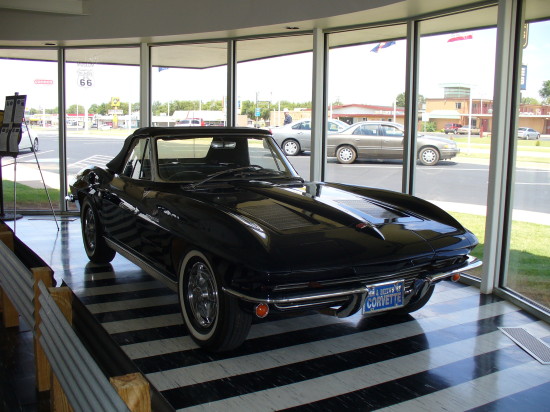 Our short but sweet stop in Clinton, Oklahoma turned about to be a favorite.  Mostly, because it was just classic in every way.  Texas is up next! 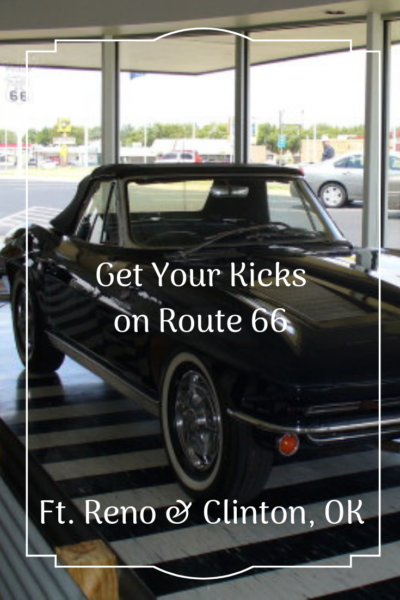