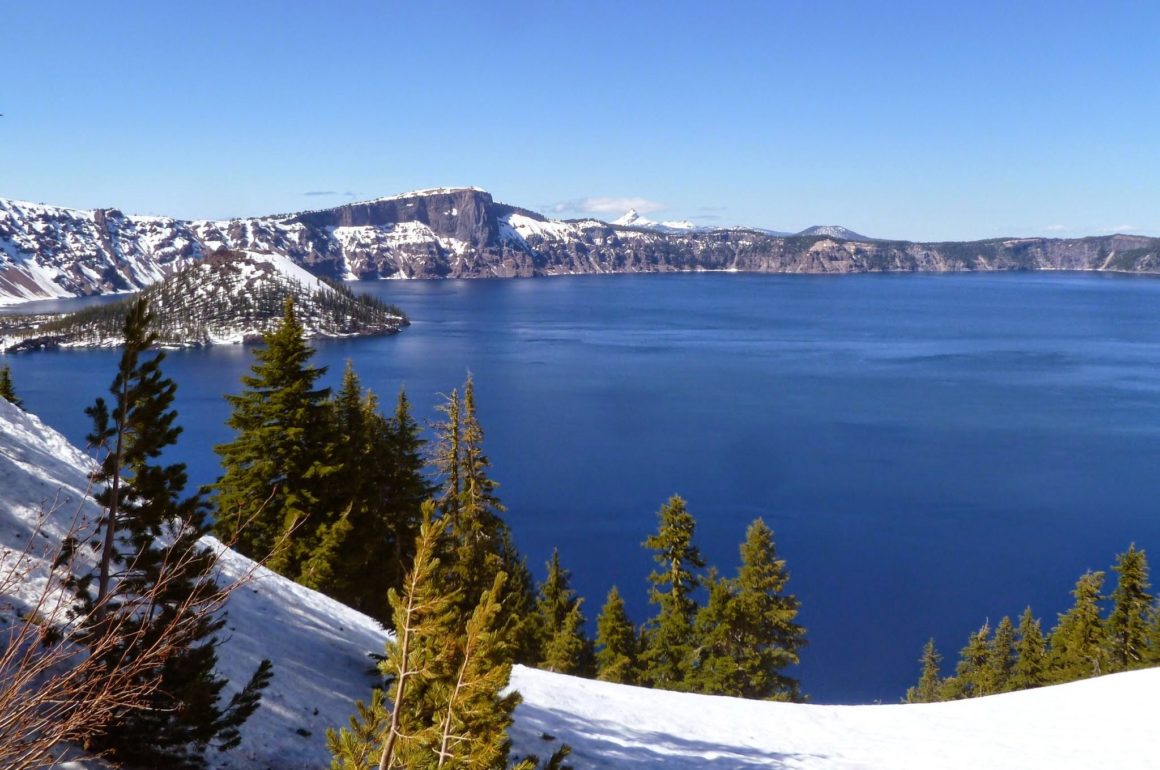 You’ve probably figured out by now that southern Oregon is home to a multitude of lakes; Lake of the Woods, Hyatt Prairie, Willow and Fish Lake are just a few of the ones we’ve explored.  But as far as mountain lakes go, Crater Lake is the granddaddy of them all.

It is right up there in the top five of special places.  It is pretty much picture perfect, crystal clear, pristine and almost beyond belief when talking about lakes. The 2-hour drive from Ashland, OR, for the most part, follows the amazingly beautiful Rogue River and there are several places at which one can stop to soak up the cool flowing water of the Rogue and maybe even dip in your tootsies or throw out a fishing line. 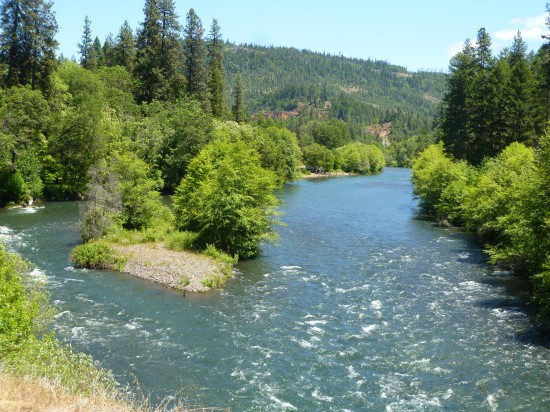 At an elevation of 7,100′, Crater Lake sits majestically high in the sky, it is 6 miles wide and it is the deepest lake in the United States at 1,940′. As the name suggests, the lake was formed after the volcanic eruption in 5,700 B.C. In 1902, the lake and 183,224 surrounding acres became part of the National Park system. 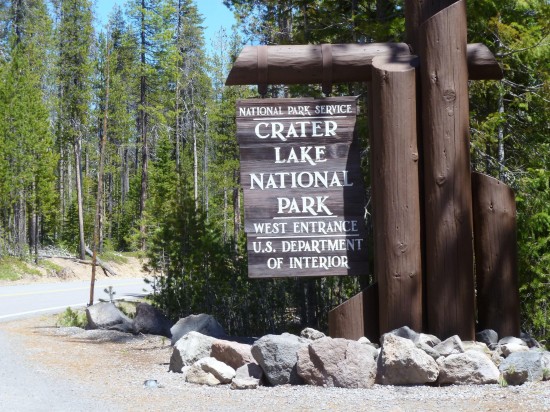 That’s a Lot of Snow!

On average Crater Lake receives 44′ (yes, that’s forty-four feet) of snow annually, but in 2011 the area surrounding the lake received a whopping 56′ of snow.  In any given year it can be fairly typical to see mounds of snow, even in summer, but 2011 was really something.  I took these photos on Father’s Day, 2011 to record the snow levels. 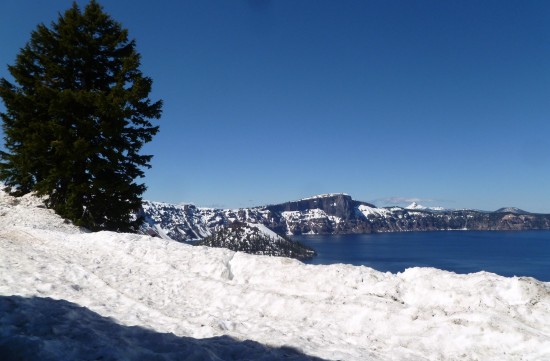 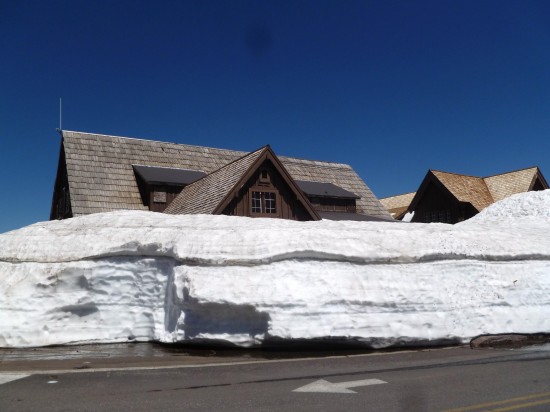 The trick is to find the entrance!

Every summer, beginning in July there are 2-hour boat tours available on the lake, but one must hike a trail down to the shore to board the boat.  That may not sound too bad until you focus in on the fact that to get back up the trail it is a climb of 700′ and the equivalent of climbing 65 flights of stairs. So, while the boat tour is sure to be spectacular, I’d think twice before taking on those stairs!  Actually, Abi and I are thinking of taking on the challenge this summer, maybe in July or August.  I’ve been told being out on the lake offers breathtaking views and that the water is so clear it’s almost eery how far down you can see.

A Row of Rocking Chairs

One of my favorite things to do when we visit the lake is to just hang out at the lodge; a mountain-style 71-room lodge near the rim of the lake.  The large sitting area adjacent to the dining room has a massive fireplace that just begs for you to sit and relax, maybe have a lite lunch or just sip something yummy. Just outside the lodge and overlooking the lake there is a row of rocking chairs, and if you’re lucky enough to find one or two of them vacant, grab em! It doesn’t get much better than to sit and stare at the lake because Crater Lake is one of those amazing places where you can continue to stare for hours on end and never quite feel as if you truly saw it all. 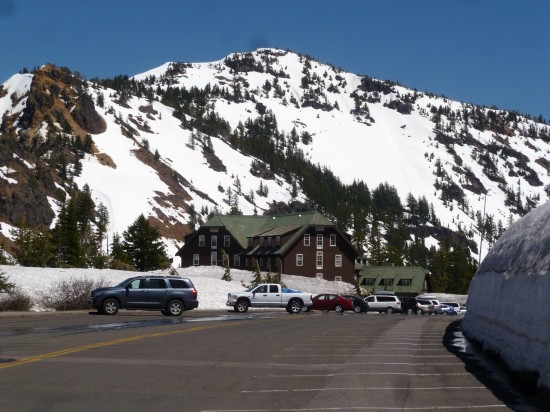 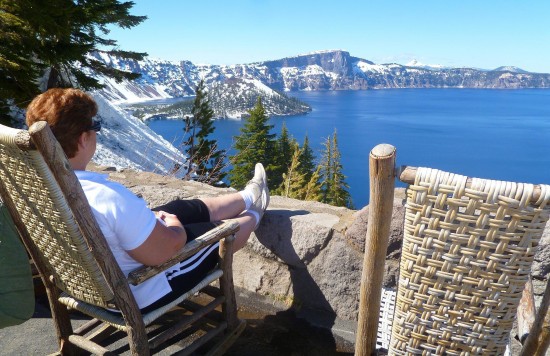 It was a hard job but I was up to the task!

Crater Lake is next in our series of posts featuring Southern Oregon and the Pacific Northwest. 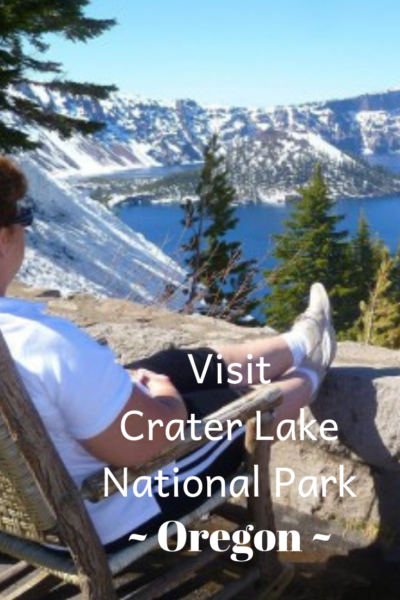 Daycation: From OR to Hilt, CA and Back Again

« Previous post
The Right Flight, for the Right Price ~
Next post »
Marie Antoinette, The Last Queen of France ~