As we climbed the flight of stairs, to the second level of the mansion at Mount Vernon, we ran our hands over the centuries old wooden railing; the same railing George and Martha Washington ran their hands over as they climbed the stairs of their home.

Guard against the impostures of pretended patriotism.

If you’ve been following us for a while, you know that walking in the path of those who walked before us is by far my most favorite aspect of travel.  This rings especially true with a visit to Mount Vernon because it is a living history museum. It is where George Washington walked.

We walked through his home and we walked through the woods where he rode horseback over the 8,000 acres of land he farmed. We stood on the back porch of his home and took in the views of the Potomac River just as George and Martha would have done. And yes, we walked where the enslaved workers walked, lived and toiled.  It’s a walk of contradictions. 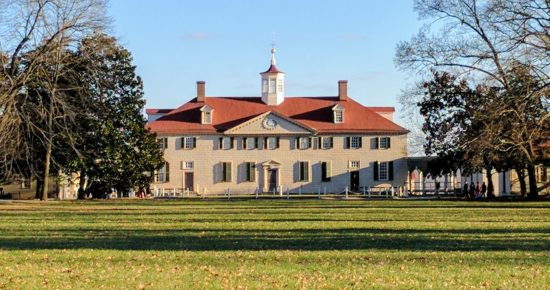 While visiting the museum (which is very nicely appointed) we learned that after her husband’s death, Martha Washington burned the bulk of the letters she and George exchanged throughout their marriage.  She wanted their life together to remain private.  It must have taken a great deal of courage for Martha to burn her treasured keepsakes, but at the same time it seems a shame to not have that historical perspective offered through their letters. So much of our country’s history was written on the pages of the letters exchanged between John and Abigail Adams. What would we have learned from George and Martha?

The back porch of Mount Vernon overlooking the Potomac River. The small house on the left is the kitchen.

On the Banks of the Potomac River

Dressed in layers of cold weather gear, we spent several hours touring the mansion and the surrounding property.  The sky was strikingly blue with only a few whiffs of a cloud or two to be seen, but it was cold, maybe 35 degrees tops. It was the kind of cold that lends one to wonder how those who lived at Mount Vernon in the 1700’s managed to survive the brutal winters; especially since the property sits on the banks of the Potomac River. 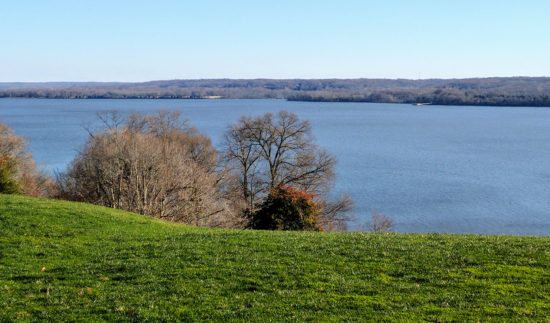 The view of the Potomac River as seen from the back porch of the mansion.

Although there were 4 over-the-door evergreen boughs in the main entrance of the home, the interior of the home itself was not decked out in the holiday fashion a visitor might expect.  Christmas, in the 1700’s, was a quiet and somewhat reserved religious day.  It was not until the 19th century that Christmas trees and Santa Claus became the common symbolism of Christmas.  With that being said though, the education center and museum were pretty much bursting at the seams with holiday cheer.

If you find yourself in or around Washington, DC this holiday season, definitely set aside a day to visit Mount Vernon.  You’ll not only take a walk through history, you’ll find yourself humming a whimsical little tune and embracing the Christmas spirit of a colonial plantation. 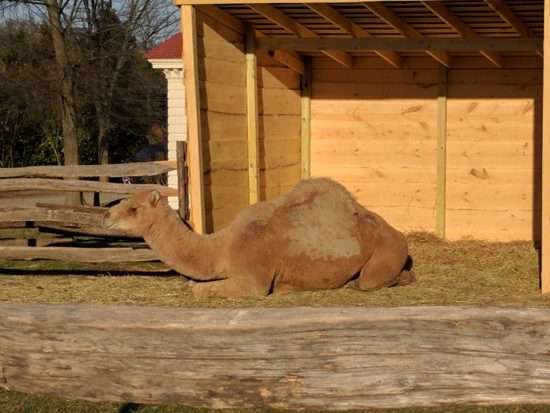 In 1787 George Washington paid 18 schillings to have an “exotic” animal – A Christmas Camel – brought to Mount Vernon for the entertainment of his family and guests. This is Aladdin, he’s hanging out for the holiday season.