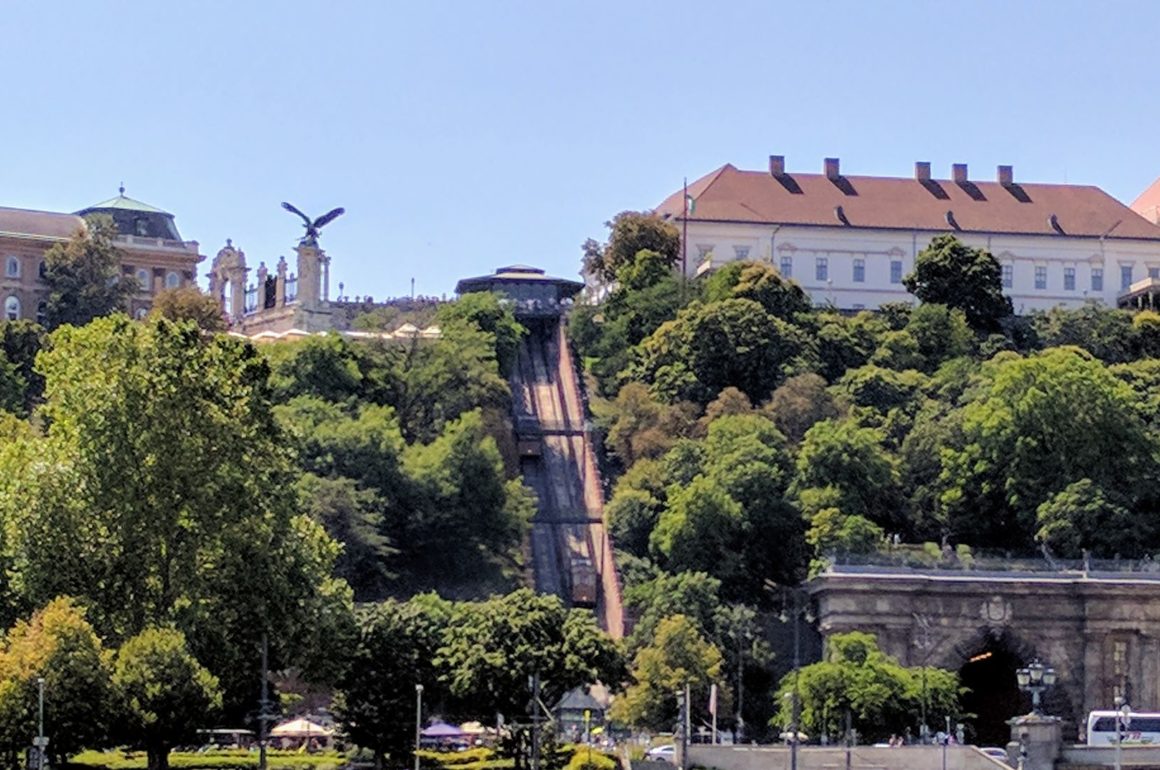 Putting the fun in funicular. The word fun is embedded in the word funicular for a reason, I like to think. I don’t know who coined the term funicular but I like to believe it was a play on words. Funiculars are indeed fun and the opportunity to ride in one should never be missed. At least we think so.

Several years ago we spent five days in Budapest and with the exception of the stifling summer heat, we thoroughly enjoyed the city. We learned quickly to explore in the morning, hide in our air-conditioned apartment in the middle of the day, and then venture out again in the evenings. It was always hot, but it was more manageable.

The funicular links the Buda Castle on the hill to the Szechenyi Chain Bridge and Adam Clark Square, both at the river level. Wouldn’t you know it? We didn’t find the funicular until we were leaving the castle. This, of course, meant we actually climbed up the road to the castle on a blistering hot day.

Although we only spent one full day in Viana do Castelo, Portugal, we definitely made sure we hit all the highlights. One of which was the Basilica de Santa Luzia. Now, it happens that the basilica sits high atop a hill and has stunning panoramic views. There are a few ways in which one can reach the top of the hill, including by car, by stairs, or by funicular.

Fortunately, a friend clued us in about the stairs. There are 660 stairs from the bottom to the top of the hill. No way. But we did walk down all 660.

One of the interesting features of the Santa Luzia Funicular is that like most funiculars, it is single track. Yet, at one point two cars can pass each other. Talk about timing!

p.s. The best cream filled doughnuts in Portugal can be found in Viana do Castela. Just sayin.

Putting the Fun in Funicular

Sometimes, we drop the ball and forget to take a quick photo, or film the ride such as we did (or didn’t do) in Zagreb, Croatia and Ljubljana, Slovenia. As much time as we’ve spent in Porto, Portugal, we don’t have a single photo of riding the especially steep funicular. Go figure.

The thing is, it’s not that often we’ll come across a funicular, but when we do we’ll do our best to catch a ride. Most often, the cost of tickets is reasonably low and the ride usually just takes a few minutes, but damn they’re fun!

Do you have a fun funicular memory?

« Previous post
I Have a Thing About Taking Pictures of Signs
Next post »
Great Falls National Park: Virginia -vs- Maryland