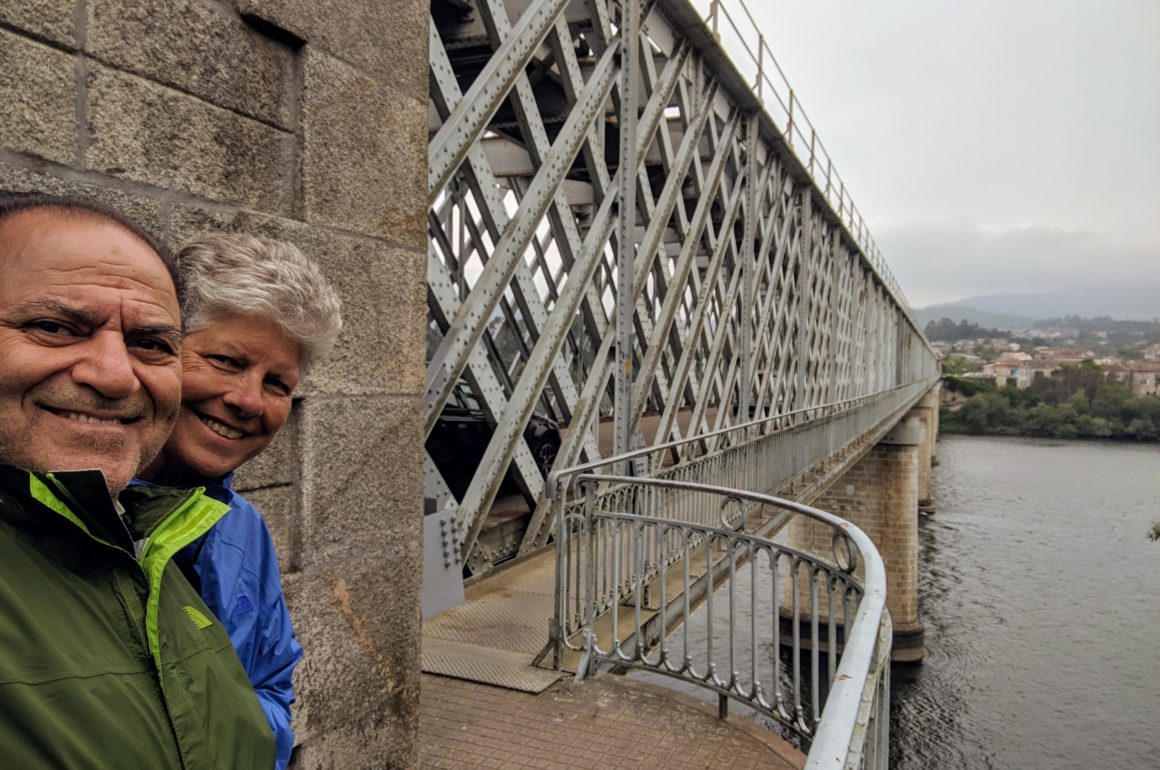 Terrified of heights, the idea of walking across the bridge that connects Portugal to Spain was overwhelming for me.  It turns out that the rain actually kind of saved the day.  Our umbrellas were open as we approached the bridge and rather than stopping to think about it, we just kept right on walking.  As you can see from the photo pedestrians walk on the outside of the bridge.  It is one scary ass bridge to get across, let me tell you. 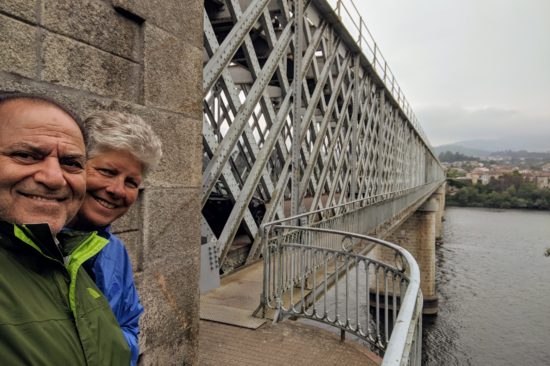 The afternoon before we crossed. I’m silently screaming at the thought of facing this fear.

Abi walked on the outside of the walkway next to the railing while I had a death grip on his arm and walked on his left.  He tilted his umbrella so that it blocked my vision of the railing and the river below, which was brilliant. Climbing the mountain on day five was physically challenging, but walking across that bridge was emotionally exhausting.

The first order of business once in Tui was to find a cafe where we could eat greasy fried eggs and french fries with an added side of chorizo for me.  I swear there’s nothing like a hot plate of comfort food when you’re wet, cold and hungry.  A couple of cups of strong hot coffee for Abi and hot chocolate for me and we were ready to face the day. 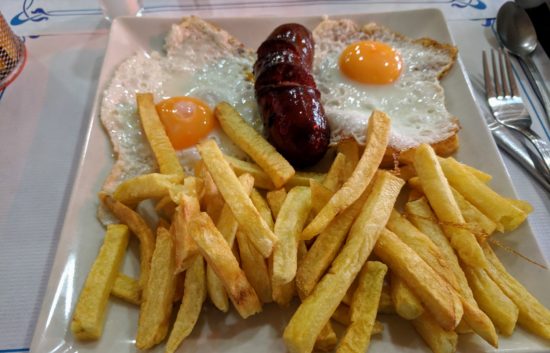 When you know you’ve got to walk 12.5 miles in the rain, you need all the comfort you can get.  Pretty sure we walked off all the calories too.  It can also be noted that on any given day there was an ample stash of chocolate bars in the day pack as well.

The historic charm of Tui was clearly evident but with a long wet day ahead of us we pretty much just followed the Camino right through town.  Fortunately, it winds it’s way up a hill to the Cathedral of Santa Maria de Tui, which looks more like a fortress then it does a cathedral, but there’s a good explanation for that.  It was in fact a fortress and it played a significant role in the city’s line of defense against the enemy of the day. 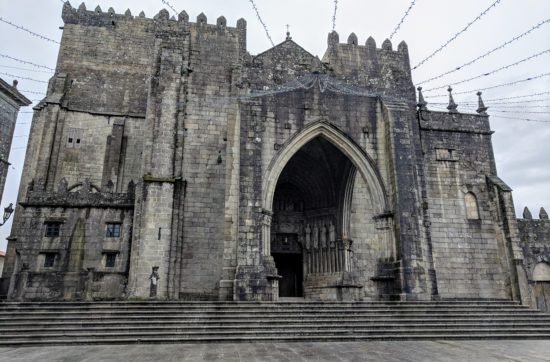 Not wanting to take the time to join a tour, we were able to just step inside and take a quick peek.  Normally, we’ll go out of our way to visit a cathedral, we never get tired of the history, architecture and art, but it was a wise decision to keep moving.

From Tui to Porrino

Despite the rain, or maybe because of it, it was a beautiful walk from Tui to Porrino, our stop for the day.  Primarily, we walked through forests of green and alongside flowing creeks and rivers while embracing the sweet peacefulness of having the trail to ourselves for the better part of the day.

I’m sure you can imagine with all of the rain, the Camino was a muddy mess on our day seven of walking the Camino Portuguese.

From Porrino to Arcade

Did I mention it rained on day seven?  Ha!  Mother Nature was just gearing up; we hadn’t seen anything yet.

As I scrolled through our collection of photos from day eight I was somewhat surprised when I realized how few photos we had.  I checked our notes in our Portgual Green Walks road book, and mentally took myself back to the Camino where I did a little memory walking in my head. Only then did I remember why we had so few photos.  It rained on day eight and then it rained some more.  And, then it rained even more and the wind howled with such an intense ferocity that it caused us to question our motivation to continue. 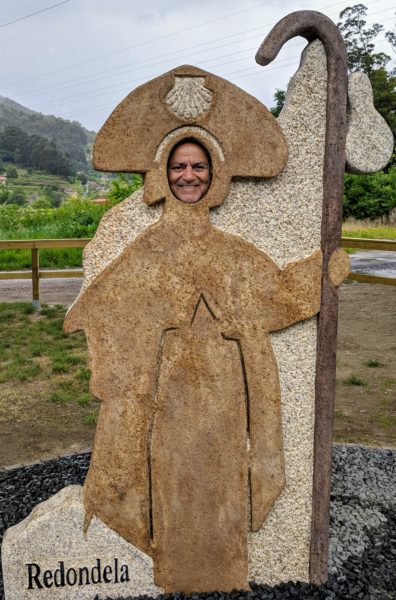 A bit of whimsy on the Camino. 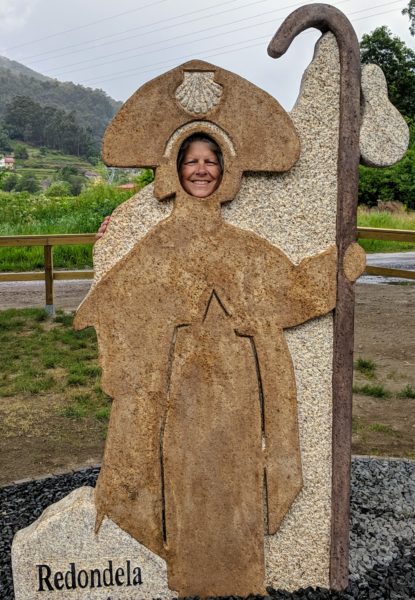 We took a very much needed lunch break in Redondela. Can you guess what I had for lunch?

The Rain in Spain

The rain and wind were relentless on day eight.  I never caught her name but a young woman was walking solo and we would see her from time to time either on the trail or at a cafe.  That day we stopped at a cafe to get a cup of coffee and use the facilities. and the young woman was there as well.  I asked her how she was doing and she said, “I’m struggling today.”  I’m guessing pretty much every pilgrim on the trail that day was struggling. 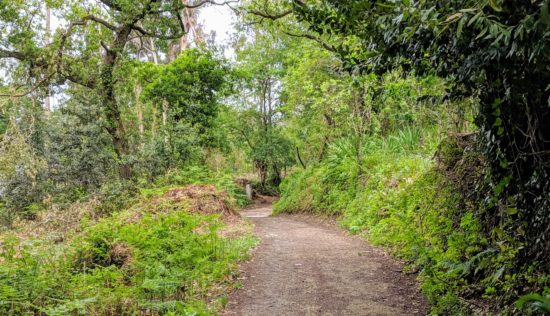 The Camino on the way to Arcade.

It’s difficult to take photos when you’re trying desperately to keep your umbrella from popping backwards as the wind catches it.  Yep.  It happened.  More than once.  At one point I had to brace myself up against a stone wall and turn my back to the wind in order to convince my cheap little three euro umbrella to pop back.

That stone wall was alongside a steep asphalt rural road that we had to carefully find our way down while fighting the wind and rain.  I think it was at that point I must have stepped wrong because my right ankle was wonky for the rest of our Camino and I began popping Ibuprofen like candy. 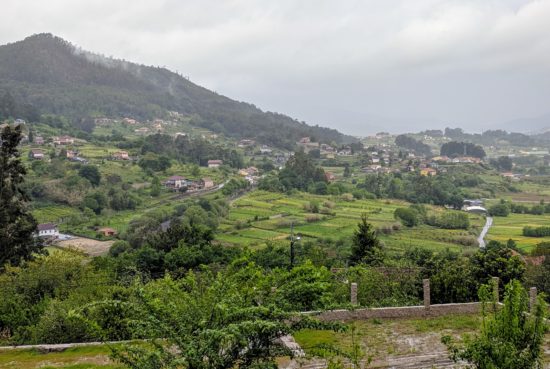 The rain in Spain.

Just about the time I had had enough and my sense of adventure was waning, I caught site of another woman we would connect with from time to time.  We never spoke, but we smiled and waved to each other.  She was walking with (I assume) her husband and twenty-something son.  Her Camino was in a wheelchair.  The men in her life would push when they needed to, or hold her back on the downhills.  She had a front wheel extension that she could peddle (for lack of a better word) when they were on the flat sections.  She was a true pilgrim on the Camino.

Day eight sucked, weather wise, but since we were able to walk on our own two feet we had absolutely nothing to complain about.  It’s the Camino. 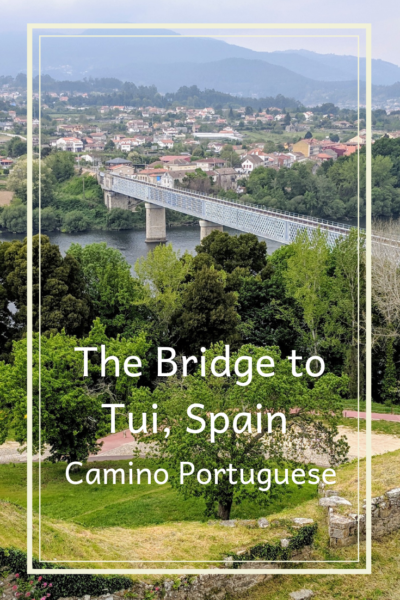