Perk #1 of the Portugal Visas ~ When the pilot announces that all crew members should stop serving and buckle up, you know it can’t be good. On the behalf of all those who, like me, can’t accurately describe the depth of how much I hate to fly, I’d like to thank the pharmaceutical companies for the invention of Valium.  It’s a game changer.

As we entered the Lisbon Airport and the whiff of cigarette smoke lingering in the air filled our lungs, I said to Abi, “Ah, we’re back in Europe.”

Standing in line to pass through customs, the little sign told us it would be a 60-minute wait from that point; not what you want to read having just spent 7 sleepless hours – in the middle seat of three seats – on a overnight crossing of the pond flight.  Tired, doesn’t even begin to describe.  And, did I mention the pilot told the crew to take their seats?  Twice.

In our sleep deprived stupor we looked around us and noticed there was no line at the EU passport holder customs windows.  It was at that moment the light bulb clicked on as if in a cartoon speech bubble above our heads.  Hey!  You know what?!  That’s us! Perk #1 of waiting nine weeks for those visas: ducking out of the 60-minute wait line and breezing right through customs, as if we owned the place. (Update:  That was the one/only time we were able to avoid the line, a fluke) 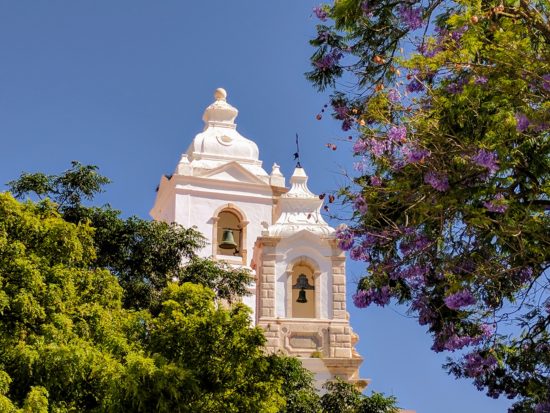 Aching for a caffeine fix I was thrilled to see Starbucks in the airport, but realizing how long the line was to order drinks and how extraordinarily long the line was to catch a taxi, we knew certain sacrifices must be made no matter how painful.  Forty-eight hours later I am still without that fix.  But, we made the 12:30 bus to Lagos, a comfortable 4-hour ride.

Are you counting with us?  Seven hour flight, four hour bus ride, prefaced by the craziest 48 hours before leaving Washington, DC, but here we are in Lagos, Portugal.

Lagos is a picturesque seaside city, with a wonderful water front promenade and a charming historic center.  It’s also home to our expat friends Anita and Dick of No Particular Place To Go who are graciously hosting our stay.  And, let me tell you they have quite the view from their balcony. 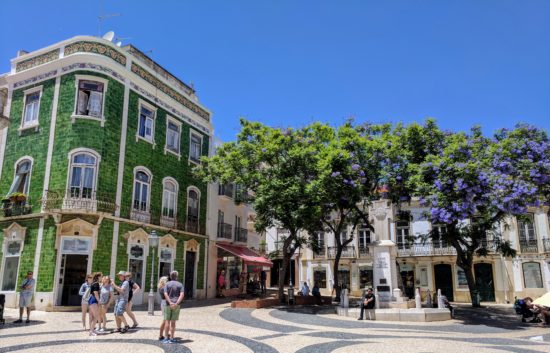 The tile work in Portugal is stunning. How often do you see a building covered in green tile? One of the little plazas in the historic center of the city.

We’ll be in Lagos for about a week.  We’ll use the time to catch our breath, get some work done, explore Lagos, and eat as much gelato as possible.  We’ll also use the time to gear up and organize ourselves to ride the rails with Eurail, which promises to be epic and we hope you’ll ride right along with us!

You know… on second thought that sounds like a lot of work. Maybe we’ll just spend the week doing absolutely nothing except walking into town each day, eating gelato and watching the world pass by.  Because, after all, it’s important to prioritize while traveling. 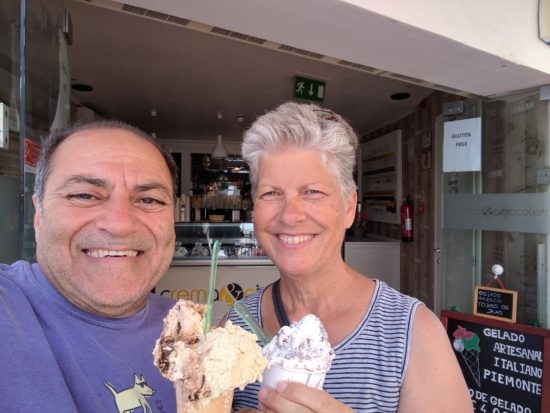 While traveling it’s important to prioritize.