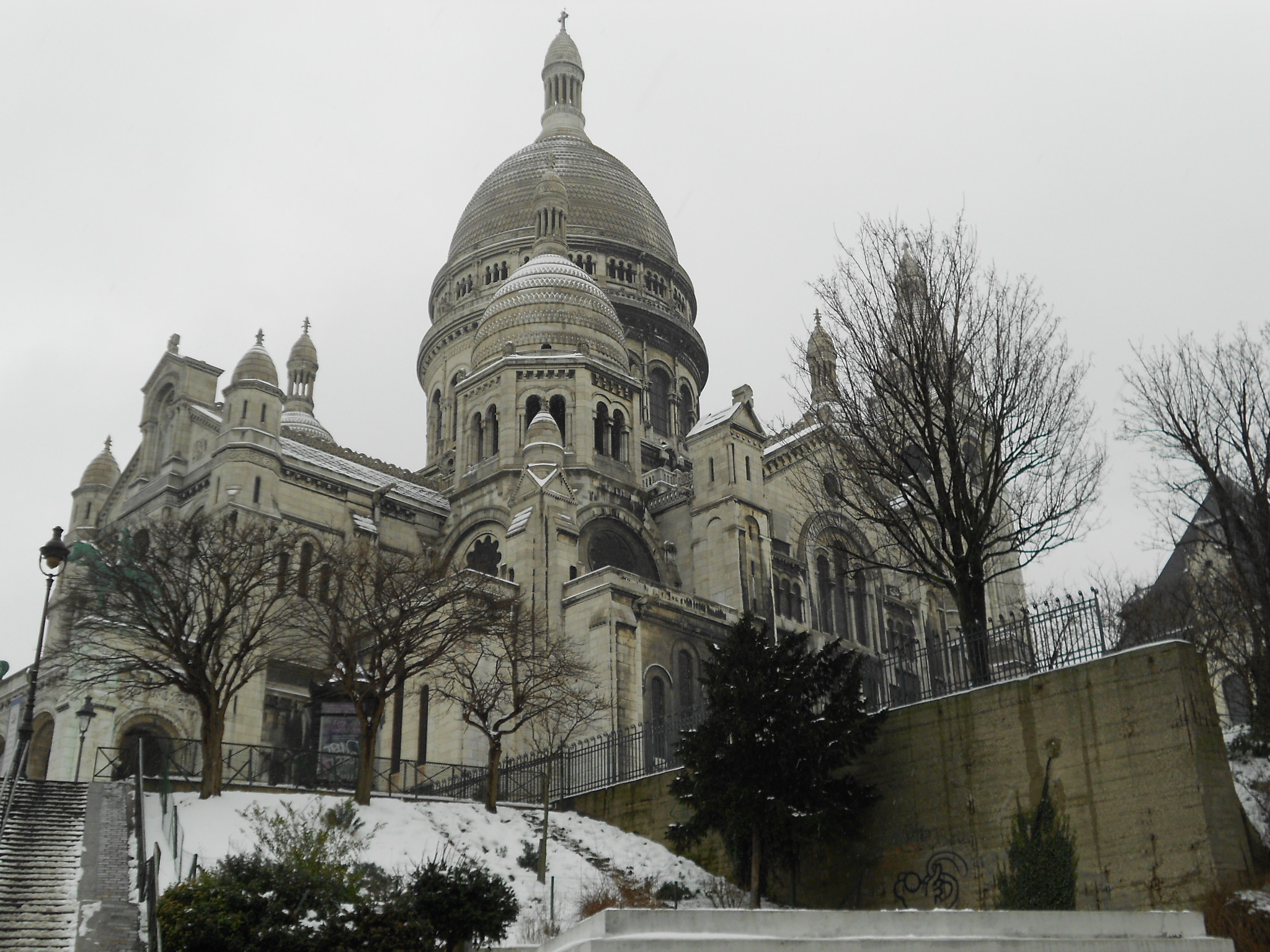 Yesterday, our day did not start off very well but somehow it transformed itself into one of our best days here in Paris.  We are walkers and thus far we have managed to walk to every place we have visited.  Yesterday though, we wanted to visit Sacre Coeur and it’s way too far to walk so it was our first experience with the Paris Metro system.

We like to think of ourselves as pretty savvy when it comes to metro systems because we have used the Washington, D.C. system for years.  Okay, yes, I know, it’s in English.  Let me take just a moment to digress and say that it is one thing to not understand the spoken word when visiting a foreign country, but it’s really difficult when you cannot read the written word because it makes it so hard to find your way.  And, while in many European countries you’ll find English subtitles, in Paris, no such luck!  With that being said, we had a bit of a glitch trying to find the right metro train.

You have to understand that the Paris underground system is a labyrinth of different levels, tunnels and directions; up, down, right, left, etc.  We finally found what we believed to be the right platform but we had no idea if every train was heading in the right direction.  Abi said, “Let’s just get on and see where we end up.”  So when the next train came along a couple of minutes later we momentarily debated the logic of just getting on when we decided to go for it.  Abi hopped on while I hesitated just a second too long and whoosh! the doors closed and Abi was on his way.  Just like in the movies he mouthed the words, “I’ll come back!”  There I was all alone in the tunnels of the metro, by myself, and not liking it one little bit.  I sat myself down with my bottom lip trembling trying to console myself that it wouldn’t be too long before he was back and sure enough, in less than 10 minutes he was.  You better believe the next train that came along I was on that baby! 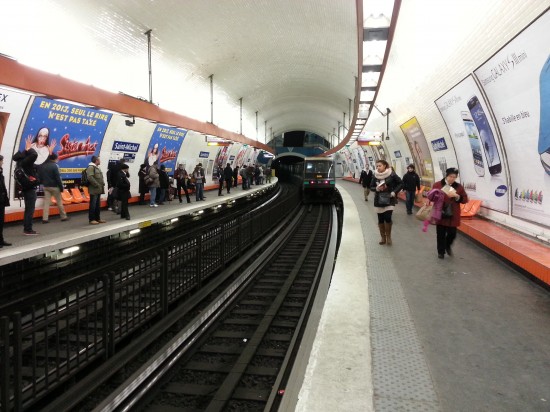 Our destination was Sacre Coeur but we wanted to first stop at a station that also serves as a Eurorail station so  we could buy our tickets for our planned day trip to Reims (Champagne region) on Wednesday.  After walking back and forth through the train station a couple of times, we found the ticket office and we were standing in line when Abi sent me out to look for a ticket machine which I found and we gave up our place in line to buy our tickets.  Everything on the machine was written in French, naturally, with no subtitles and when we finally figured it all out and we were ready to purchase our tickets, the French ticket machine rejected our American credit card so back in line we went.

With tickets finally purchased and safely tucked away we made our way back to the metro train and rode to what we thought was the right stop.  When we came up from underground I looked around and my first thought was, “Oh Toto, we’re not in Kansas anymore!” but I’ll just leave it at that.  Sacre Coeur sits on top of a hill and I lost count after 9 flights of 20 stairs each flight, but I know we climbed well over 200 stairs by the time we reached the church. 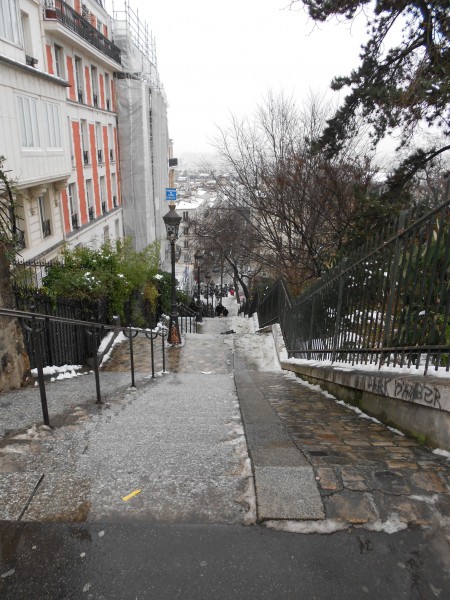 I stopped counting after 180!

Had it been a clear day we would have been able to see panoramic views of the city below.  Even so, it was pretty wonderful. 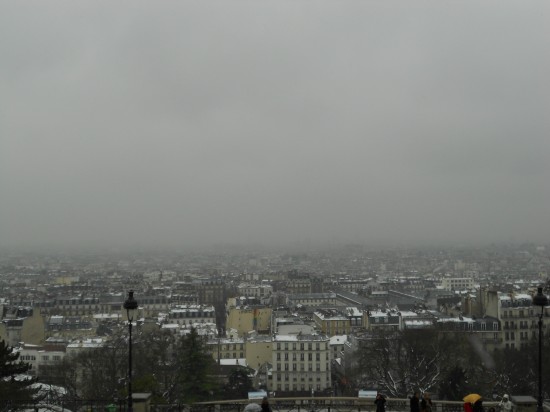 Although the basilica looks to be centuries old, it is actually only 130 years young and has quite the story. 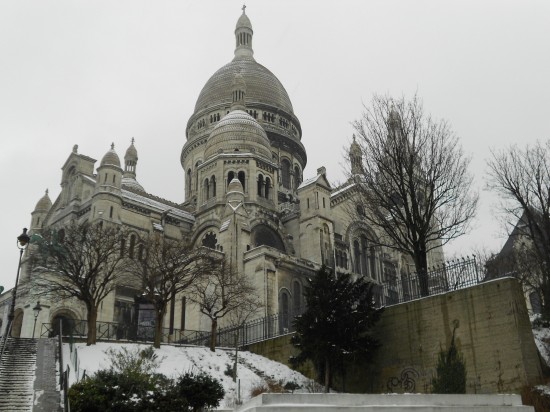 Technically, photographs are not allowed inside the basilica but somehow Abi’s phone captured this photo! 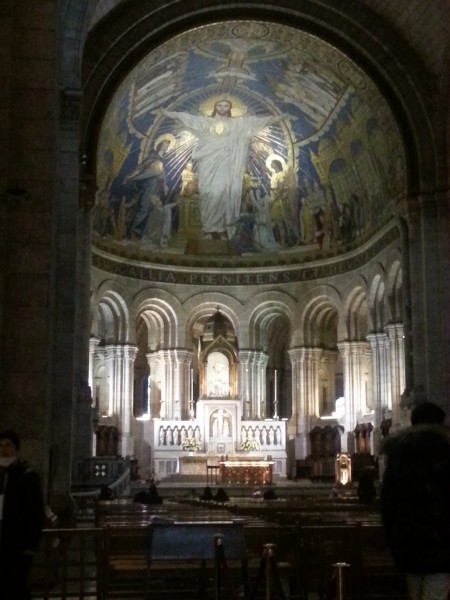 After touring the basilica we stepped outside to discover the most magical snowfall you can imagine!  HUGE fluffy white flakes falling in silent beauty.  It was breathtaking!  The area known as Montmartre, a little village with a long history of bohemian charm, is just steps away from Sacre Coeur.  Montmartre is picture perfect and under a blanket of snow, it was as if we had stepped onto a movie set.  We were so enamored we just let the magic of the day flow over us as we roamed each narrow cobblestone street.  My new friend, Luigi, sketched my portrait in a matter of minutes, we sat in a cozy cafe and drank hot chocolate and ate crepes and marveled at the tenacity of the artists who continued to create under the dryness of umbrellas. 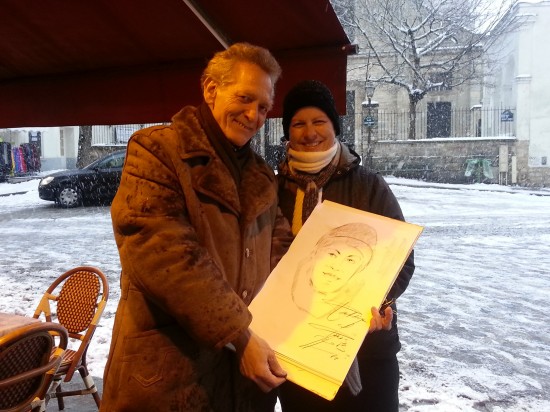 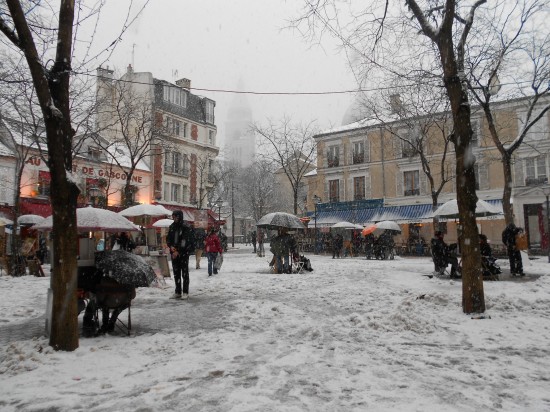 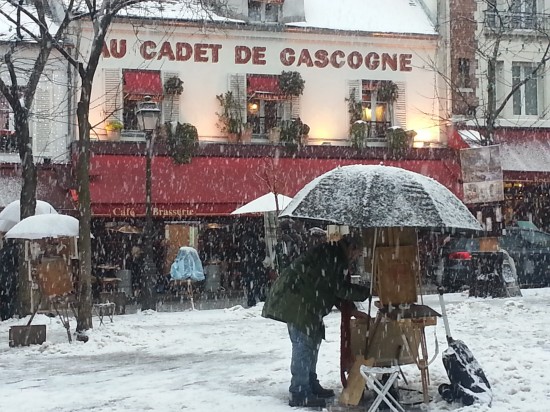 Rather than hike down the same number of stairs, we opted to take the funicular from the top of the hill to the streets below where we found our way back to the metro station and zoomed back to our Parisian home away from home.  It was a day we will long remember. 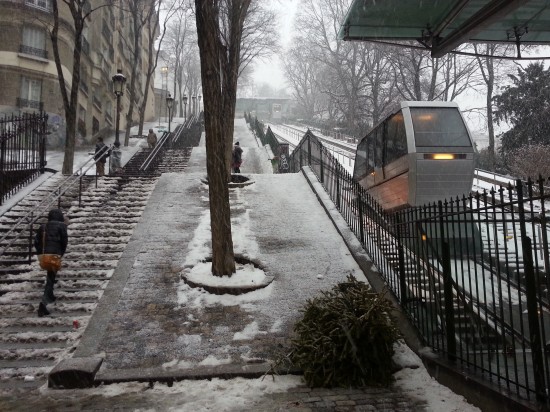