Espinho – A Boardwalk & A Market 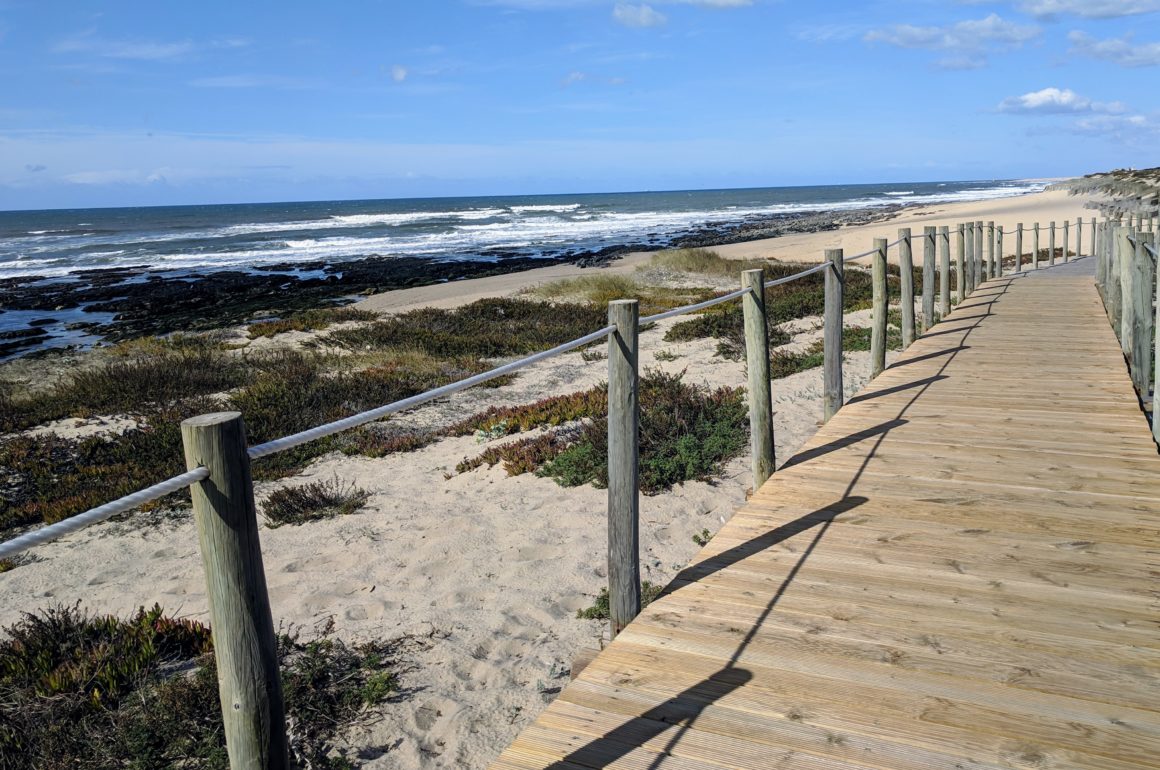 If it’s Monday, then it’s market day in Espinho.  And what better way to get to Espinho than by train and a good long walk along the coastal boardwalk.  It all makes for the perfect day.

Trains frequently leave from the historically beautiful Sao Bento Train Station bound for Espinho. As an aside, all trains that leave from Sao Bento will stop at or pass through the Companho Train Station.  No reservations for Espinho are necessary, just purchase a ticket from the machine and hop on the next train.  It’s the same train we took when we traveled to Aveiro for the day.  Granja and Espinho are stops along the way. 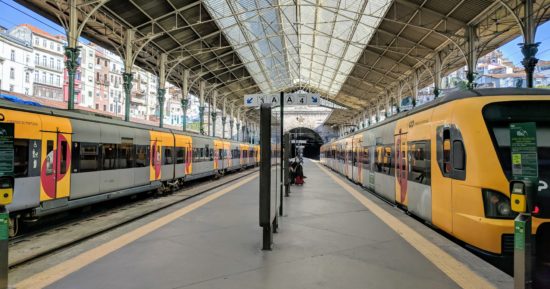 The trains pull in/out of Sao Bento all throughout the day.

Granja is a tiny little blink of a station, perfectly charming with a manually operated crossing gate.  The first time we did the coastal boardwalk walk, we rode the train all the way to Espinho and walked back to Granja, which works, but it’s not ideal because the Granja train station can’t be seen from the boardwalk.  It’s a bit tricky to find your way back to the station.  Instead, the best option is to get off the train at Granja (maybe 20 minutes south of Porto) and walk toward Espinho. 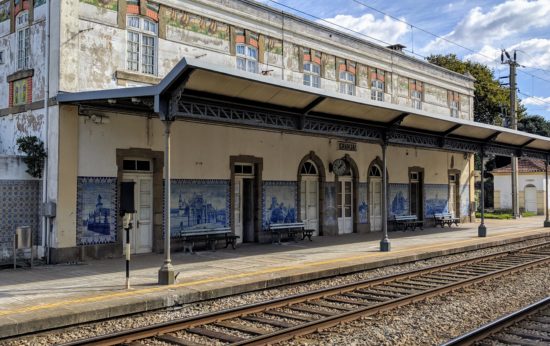 Once off the train, look across the tracks toward the ocean.  You’ll see a gate-wide opening in the boundary fence along the tracks.  Just pass through, aim for the ocean, and you’ll come to the coastal boardwalk. You can’t miss it. Turn left and keep the ocean on your right.  Trust me when I say you wouldn’t want to miss this walk. It’s beautiful. 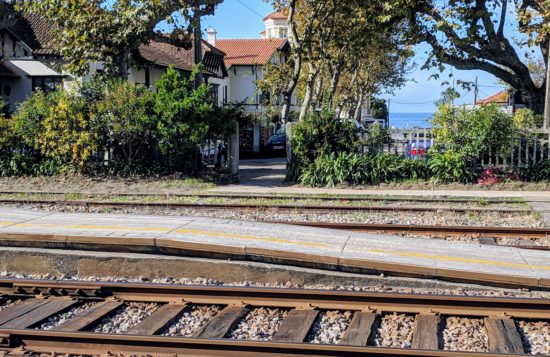 See the opening in the fence? Just walk toward the ocean.

The boardwalk is about three miles of well-maintained wooden planks with rope rails – a boardwalk.  Literally.  It follows the beach through the dunes and the grasses, and all the while you can take in the fabulous views of the pounding waves and frothy surf breaking against the shore.  It has to be one of the prettiest (and easiest) walks in the region. It’s one of those walks that just soothes the soul. 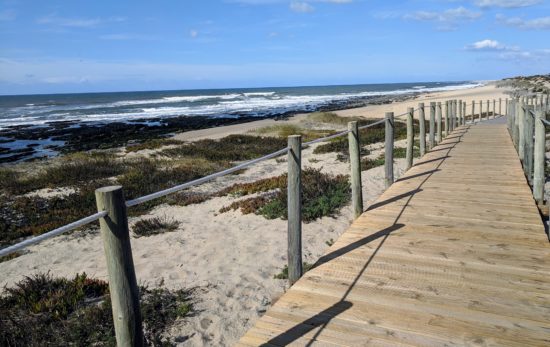 The coastal boardwalk from Granja to Espinho

With a population of about 31,000, Espinho is a somewhat sleepy little city by the sea.  The first time we visited we hadn’t yet learned about the market, we went just to do a little exploring and to take our first walk on the boardwalk.  Although the city doesn’t have as much of the historic charm as say, Guimaraes or Coimbra, it is still quite lovely and the city boasts a nice pedestrian promenade through the city center.  And, all the while the sea is just a short walk away.

Downtown Espinho with the sea on the horizon.

Along with being a beach resort, Espinho is in a legalized gaming zone and it’s home to a casino.  We found this particularly interesting as it just seemed so out of place.  No, we didn’t go in.  Too many better things to do with our money.

While strolling the promenade, during our first visit, we found a sweet little cafe, Aipal, with the nicest staff.  We sat down and enjoyed a lunch of yummy homemade soup, sandwiches, pastries, a bottle of water and coffee, all for just 10€.   When we next visit Espinho, Aipal will be our go-to cafe.

It was on our second visit to the city, and our second coastal walk, that we made our way to the market. Having been established in 1894 Fiera de Espinho is well-known in the Porto region and throughout Portugal. It is without a doubt the largest open air market we have ever encountered, in all of our travels around the world. If you can name it, you can find it at the market.  It’s all kinds of fun. 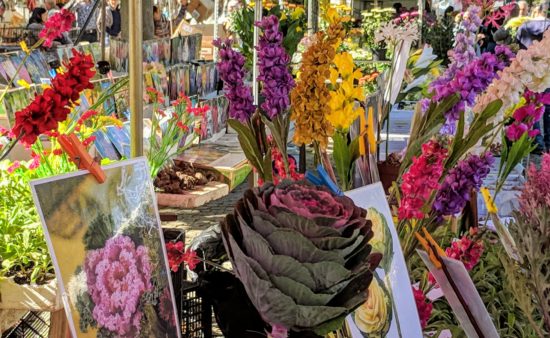 Fresh flowers to delight the senses.

Pictures can’t even begin to capture the size of the market.  It seemingly just meanders on for blocks.  Seriously, everything from clothing to shoes, to garden supplies, to pastries and bread and everything in between.  All you could ask for in produce and fruit is farm fresh.  And, there are live animals, such as chickens, for sale.  But, I just skipped right past those vendors.  I didn’t want to think about the chickens’ fates. 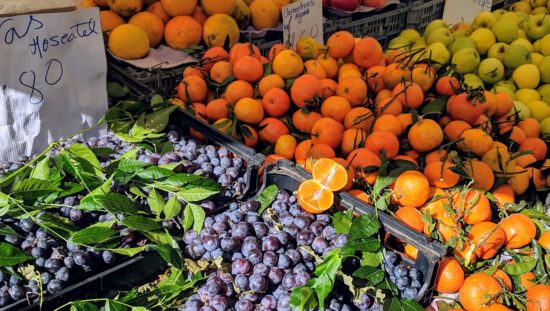 A canvas of fruity goodness.

We worked up quite an appetite while exploring the market and we were delighted to come across freshly roasted chicken and sausages, which paired quite nicely with a hunk of artisan bread and the best creamy cheese.  It made for the ultimate bench picnic.  Don’t you love a bench picnic? 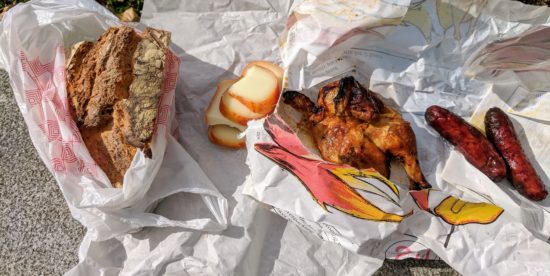 Everything was so delicious and fresh. Yum!

With Porto just a 30-minute train ride away, and with the option of a relaxing coastal walk, a day trip – or even just a few hours – to Espinho should not be missed.  Now that we know the ins and outs of visiting this lovely seaside city, we’ll make Mondays our Espinho market day when next we spend time in Porto.  It’s just too good not to!

If I haven’t yet convinced you to walk the boardwalk from Granja to Espinho, here’s a 60-second clip of us doing a little shadow walking. You’ll also see the local train pass by. 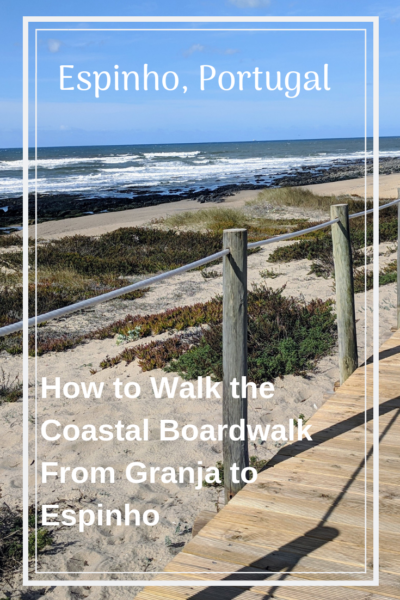 « Previous post
How To Walk from Matosinhos to Porto
Next post »
Day Trip From Porto to Viana do Castelo, Portugal