Charleston: I Half Expected to See Scarlett O’Hara ~

We’ve been home 7 days and I’m finally coming out of my road trip fog and accepting the fact that we are actually home and life goes on.  I always have some delicious little what’s next travel plan in my head.  I can’t help it, I’m always ready to go again.  In the meantime though it’s time to get it in gear and get this Inn of ours ready for guests and the upcoming 2014 season.

This is no small task but fortunately, Abi and I are both super organized people – some might say borderline obsessive – but it works for us and it sure makes our daily life a little less frantic when we’re in the full swing of things.

But let’s talk of other things, shall we?  How about Charleston, South Carolina?  Have you been?  It’s one of the places I’ve kept in the forefront of my memories because I found it to be an enigma.  It is a city full of charm and southern hospitality but it also has such a sordid history.  Visiting Charleston left me with a basketful of mixed emotions.

Who knew we’d experience some of the coldest weather in the history of the south while traveling through, and the cold in Charleston kicked my butt.  I’m not sure why though because we live in cold country.  Maybe it was the fact that historic Charleston sits right at the water’s edge and the wind off of the water just added to the cold.  Being the history nerd that I am I wanted to visit Ft. Sumter but didn’t realize the fort sits on an island just off the coast of Charleston and it’s a ferry ride over to the island.  Somehow, getting on a boat, in the cold, just didn’t do it for me so I settled for the visitors’ center and was quite content to do so. 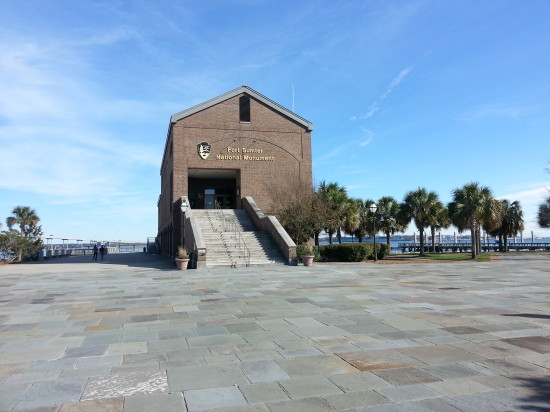 Historic Charleston is pretty much what you would imagine it to be, stately homes overlooking the water, exclusive neighborhoods, restaurants, shops, historic cemeteries, churches, etc. etc.  It’s all there and even on a freezing cold day with the sun shining in the bright blue, yet oh so cold sky, the gardens and homes were still beautiful.  I can only imagine how pretty it must be in the spring and summer.  And many of the large grand homes were built facing the same direction, I’m guessing in order to take advantage of a cool breeze during the hot and humid summer months, but I don’t really know.  Do you? 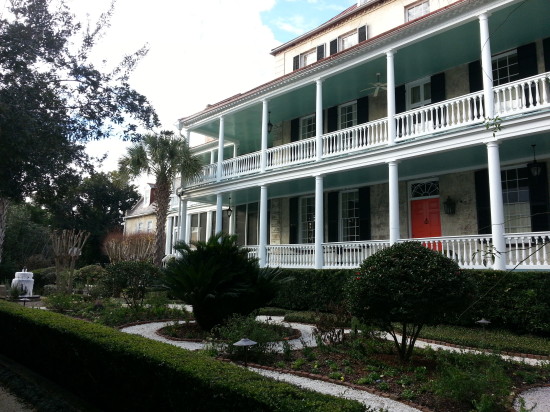 As we strolled the neighborhoods I tried to forget about the cold and lose myself in the era of the southern genteel woman; I half expected to see Scarlett O’Hara passing by. 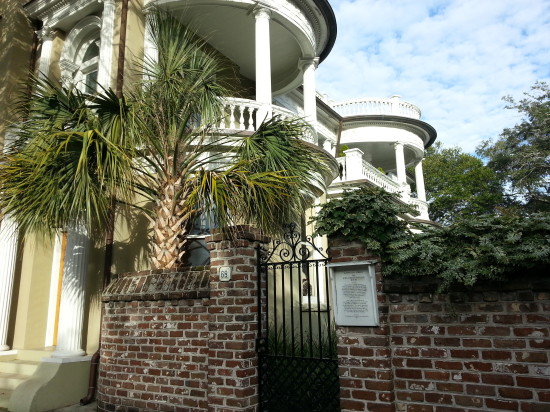 Note the 2nd story balconies – can you see Scarlett fanning herself? 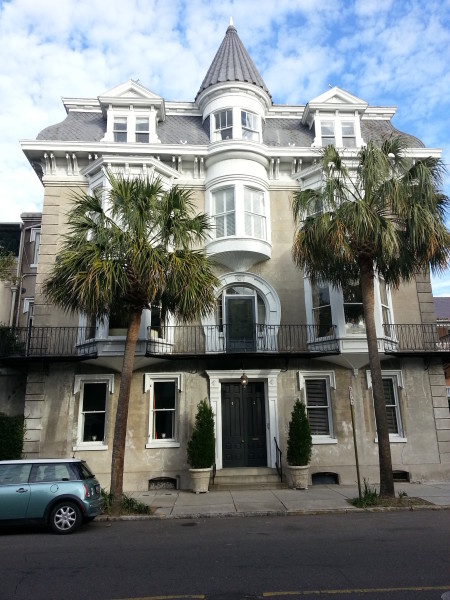 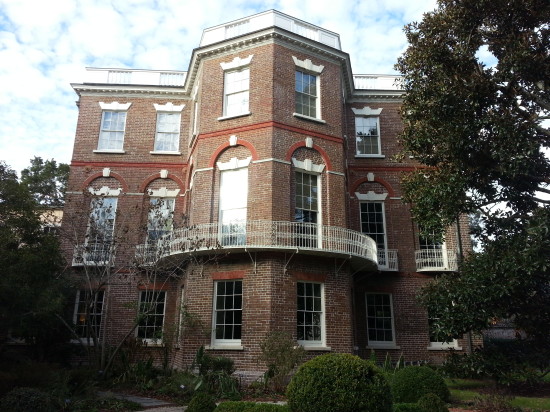 It was all a bit surreal, to be walking the cobblestone streets and feeling as if we’d been transported back in time, but there was one thing in particular that drove home the point of contrast in that world.  The wealthiest of the wealthy – as many of these homes were built by plantation owners – and the practice of slavery.  We visited one of the original slave marts, yep, that’s right, a slave mart. 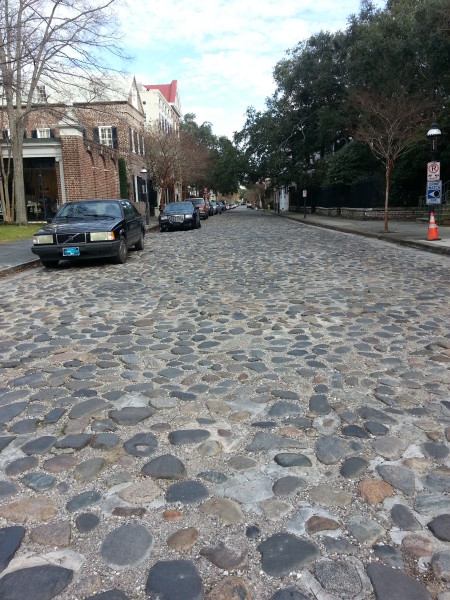 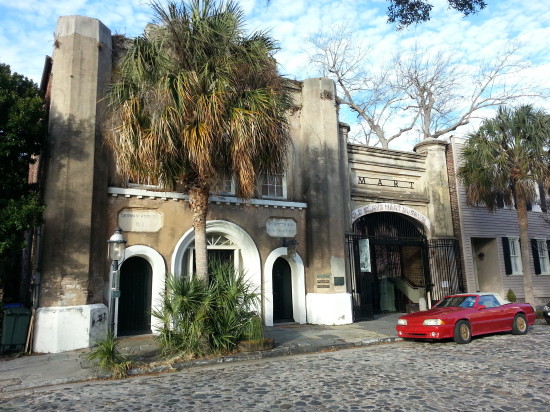 One of the original slaves marts in Charleston – don’t you hate it when an ugly car gets in your shot?

It is a small, but nicely presented museum, in the actual building where slaves were kept locked up and readied for sale.  I have a hard time just writing that sentence.  The United States was certainly not the first country to hold slaves, the practice was rampant for generations in other parts of the world, but there’s nothing like standing in the path of those who walked before us to bring it to light.  It’s one of those experiences I think we all need to witness to remind us of our history.

One of the most moving testaments in the slave mart was an audio recording of a woman who was sold at the slave mart.  If I remember right she was in her 90’s when she made the recording.  She told the story of how her father asked his master to buy his daughter so they could be together, but while on the slave block, she told the master she would rather slit her throat than to be bought by him because he had a reputation for abusing his slaves.  He didn’t buy her, so she was sold to another man who liked her spunk and she stayed with that family until she was freed.  I cannot tell you how powerful it was to listen to her voice telling her story.  How do you even begin to process such a thing?  And I’m still trying to wrap my head around the fact that freed slaves actually owned slaves of their own. 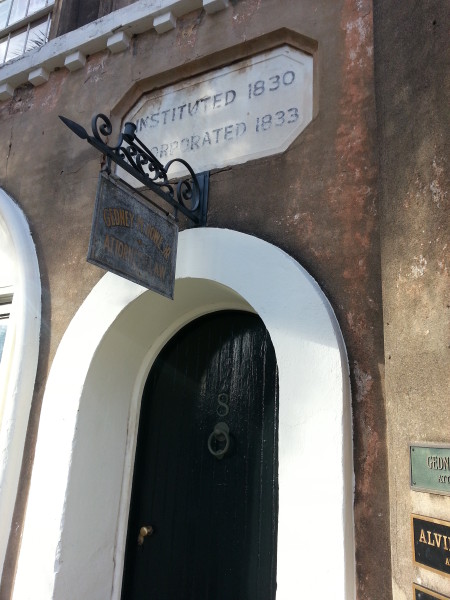 So while I enjoyed our visit, I found Charleston to be an enigma because it represents a time of gentility, grace and southern charm and hospitality, but at the same time it was the hub of slave trade in the south.  How do you balance that out?  Yes, I know, it was a long time ago, but that’s why history has such a hold on me, because we can step back in time for a bit and remember those who came before us – the good and the bad.