On Day 1 as we began our epic walk on the Camino de Santiago and as we began to ascend the pass over the Pyrenees (and I was barely breathing) a man came up from behind us, greeted us with the international “Buen Camino” and passed by.  But then he turned back and asked where we were from and the conversation went a little something like this.

Hey, my name is Carl.

Carl:  Where you from?

Carl:  I have a (relative) who lives in Pennsylvania.

Carl:  Are you Catholic?

Me:  No, I’m about as far from being Catholic as a body can be.

Carl:  I met a man last year who was an atheist.

Me:  Ah.  (desperately trying to change the subject) So you’ve walked the Camino before?

Carl:  Anyway, this guy I met said he was an atheist, but by the time he reached Santiago he had found his faith.

Carl:  When you get to Santiago, you’ll think differently.  I think you’ll find your faith.

Carl:  But this thing the two of you are doing – walking the Camino de Santiago together – it’s the greatest gift you can give yourselves.  Truly, it is.  And when you get to Santiago, remember my name, Carl, and remember I told you these things and that I believe you’ll have found your faith.

We have not seen Carl again since that first day on the mountain.  He was right, I will remember his name, but not for the reason he thinks. First, I’ll remember him because of his presumption to tell me it was okay that I was not Catholic.  I pretty much already knew that. Second, because although the entire conversation annoyed me greatly, now that I’m a seasoned walker of 11 days, I think back on the conversation and silently smile.

I have no religious convictions, not for the lack of my parents making me attend Lutheran services every Sunday of my upbringing, but I do believe angels walk among us.  Go figure. I’m not walking the Camino searching for answers, hell, I don’t even have the questions. I’d be happy with a pain free day.

After wondering about Carl from time to time over the past 10 days, I think perhaps it is Carl who is searching for his faith. His need to tell others that they instead will find it helps to convince himself that this time he’ll make it to Santiago, and this time maybe he’ll find his faith.

So, Carl, this is for you.  I hope you reach Santiago and I hope you find your faith. 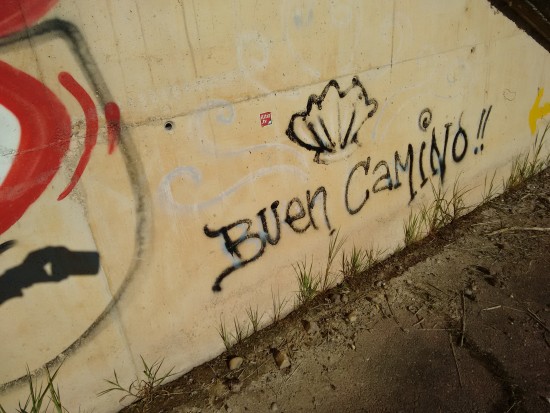 « Previous post
Realities of the Camino – We Walk, I Blister
Next post »
Camino de Santiago, Viana to Logrono to Najero