“To me a lush carpet of pine needles or spongy grass is more welcome than the most luxurious Persian rug.”  – Helen Keller

Once Upon a Time

Once upon a time in a exotic far-a-way land, a boy was born in the city of Kashan, Iran.  He was the 6th and last child born to the family and there he lived until his 4th year when the family moved to the big city – Tehran.  Little did the boy know that years later he would move to California and meet the love of his life who was also the 6th and last child of her family.  Nor did the boy know that nearly 60 years later he would take the girl to the place where he was born and where they were warmly welcomed by the boy’s Aunt Nahid.

The Mystic Charms of Kashan

Of all the places they visited while in Iran. Kashan was their favorite.  The city had a very different vibe than most other places they visited.  It felt more relaxed.  Kashan was the last stop on their 5-day road trip and with only 1 1/2 days to explore the city, they vowed to return one day.   And although the girl was hot and and somewhat melting under her long sleeves and head scarf, she embraced the mystic charms of Kashan. 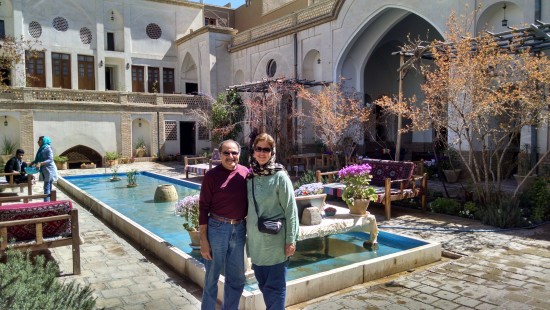 They spent the night in a beautifully restored historic home – a B&B.

Out exploring with her boys – as she called them – the boy and the girl visited the historically stunning Agha Bozorg Mosque, built in the late 18th century. 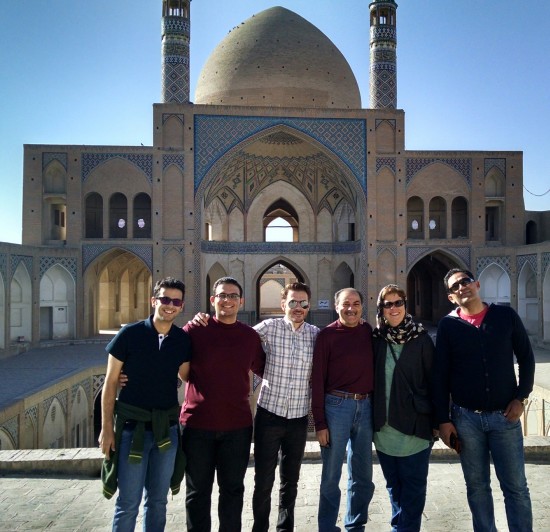 While waiting for her boys and lingering over a collection of books for sale, the girl was asked, “Would you like to visit the holy Mosque?” A bit startled, she turned to discover the words were spoken by a mullah.  He spoke perfect English; he was soft spoken and he was genuinely inviting her into the sanctum of his faith.  She smiled and politely declined, which he accepted graciously before moving on.  She declined not out of fear, but out of respect. 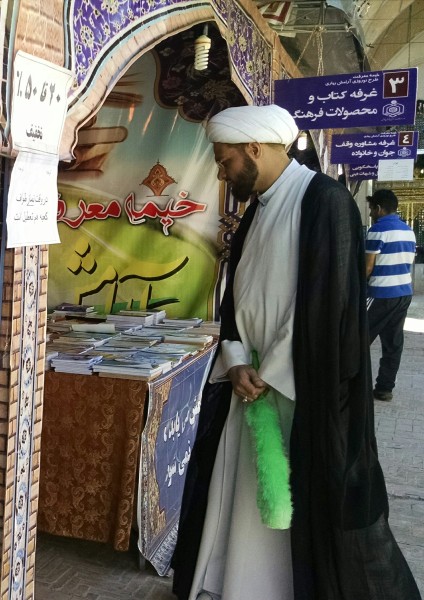 The soft spoken Mullah who extended a gracious invitation.

While out and about in Kashan, they sipped tea in an historic caravanserai. 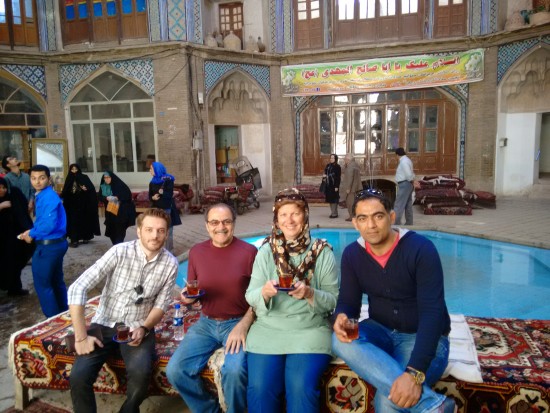 Sipping tea in an historic caravanserai in the Kashan bazaar. 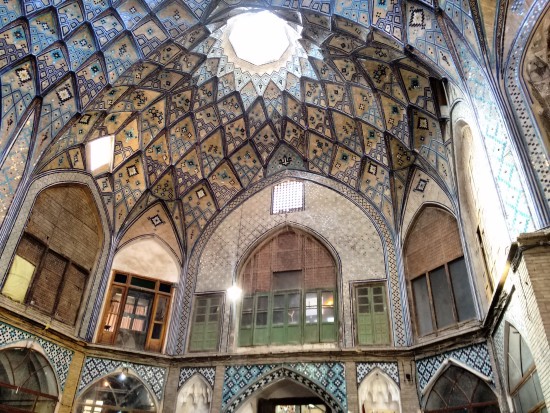 Sometimes, if one doesn’t remember to look up, one misses so much.  Caravanserai.

And they visited a restored historic home, which was incredible. 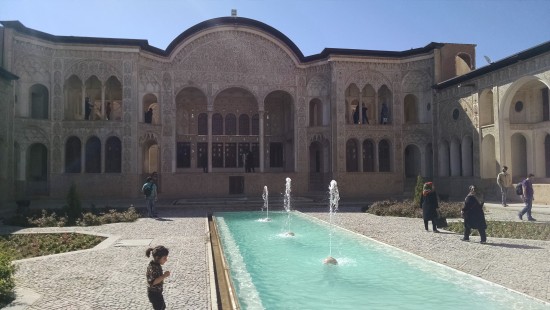 Yes! This was someone’s home!

Aunt Nahid, graciously invited the boy and the girl to lunch.  At 78-years-young and as sweet as she can possibly be, Aunt Nahid has lived her entire life in Kashan.  She was the wife, of the boy’s mother’s brother.  And not only can Aunt Nahid cook, she weaves Persian rugs!  This was an opportunity too great to miss so the girl jumped at the invitation to watch Aunt Nahid do a bit of weaving.

Aunt Nahid could probably weave a rug with her eyes closed as she’s been weaving for most of her life. Sadly, because of the trade sanctions, U.S. citizens are not allowed to take a Persian rug out of the country, but the girl was seriously wishing she could roll up Aunt Nahid’s beautiful Persian rug and hide it in her bag. 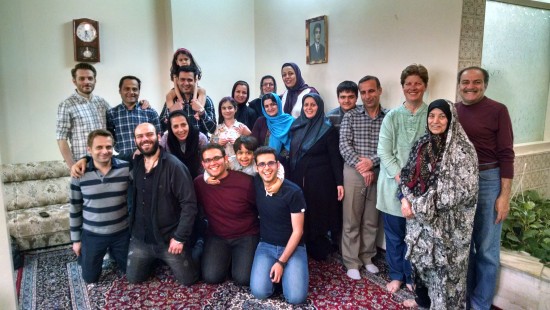 The boy and the girl with Aunt Nahid, members of her family and the road trip entourage.

It was a beautiful day well-spent exploring Kashan.  A day filled with historical wonder, family and good friends, good food and Persian rugs.  A day the boy and girl will look back on with a smile.

Because all good stories start with, Once Upon a Time and end with, The End.

This is the 6th post in our Putting a Face on Iran series.