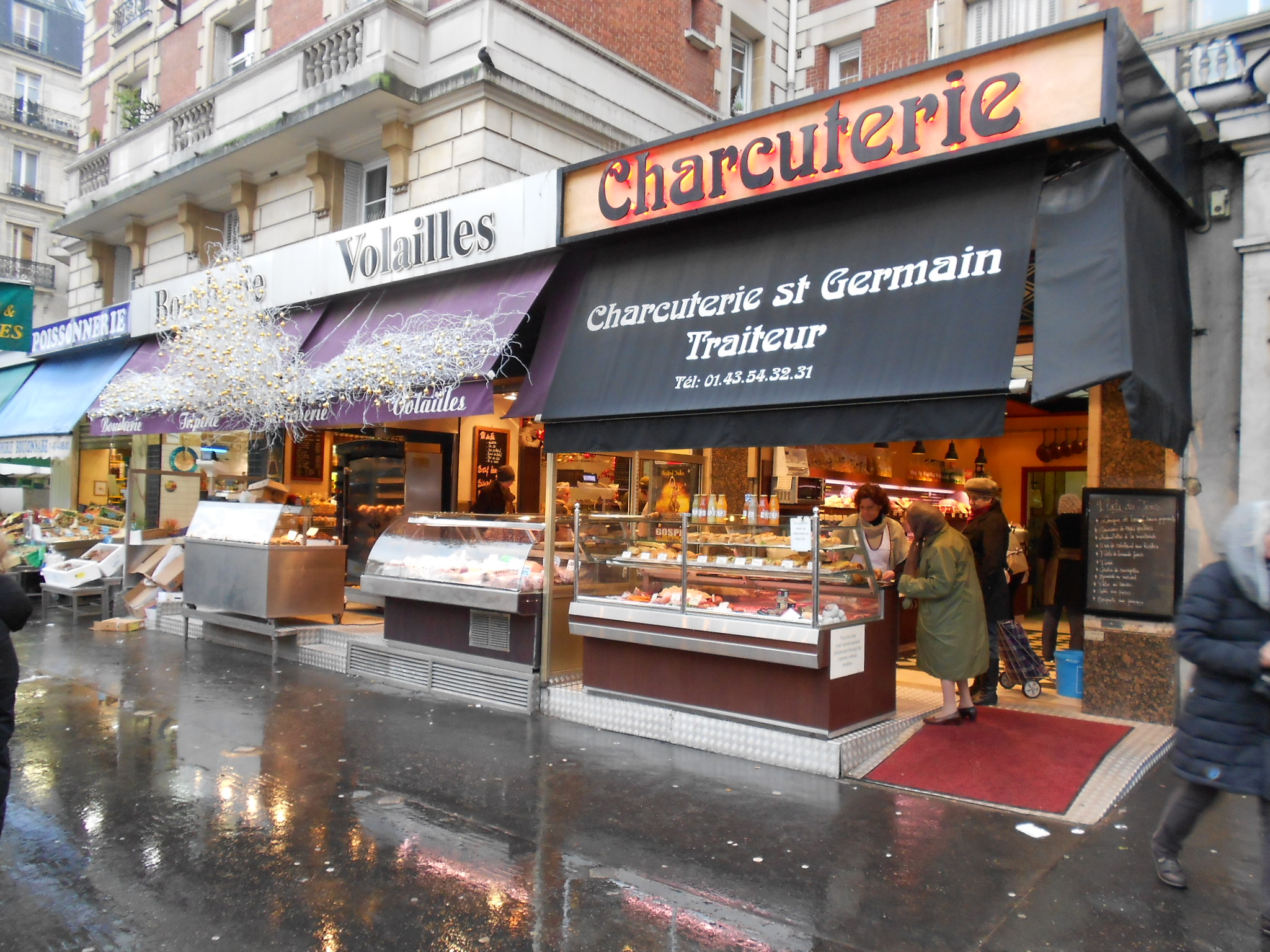 We’ve been in Paris for 9 days now and I think we’re finally getting the lay of the land and figuring out how best to fit in.  Yesterday, we took our first day trip out of the city and managed to get on the right train without getting lost and with only having to ask for help twice.  I would like to “lift the lid” off of the city and see the whole underground world known as the metro/RER system.

Believe it not, we actually had to move apartments again.  So, now we are in the same building but we are on the ground floor and oh so happily settled after two moves.  Apartment #2, which was on the 3rd floor of this building, was a nice little apartment but the residents of the apartment on the 2nd floor were walking chimneys and their never ending cigarette smoke rafted up into our 3rd floor apartment to the point where we were driven out.  But, here we are on the ground floor and while still small, very comfortable and guess what?  Our bedroom is in the basement so it’s a bit like sleeping in a cave, well, actually it is a cave but a nice cave.  Oh, and floor counting in Paris, is:  ground, 1, 2, 3, versus U.S. where the ground floor is the 1st floor.

Do you ever watch the show, House Hunters International?  We never miss it.  It inspires us to travel but we also laugh because we’ll watch some couple walk into an apartment and they’ll say the dumbest stuff, but my favorite is they’ll see a closet-sized kitchen and say, “Oh, it’s huge!”  I so get it now!  If you live in the heart of Paris kitchens are ridiculously small and the bathrooms, well… Look at this way; when all of these historic buildings were built there was no such thing as indoor plumbing so once it became popular, it was all about building a bathroom in any tiny crevice of space one could find.  We are fortunate, we actually have an updated albeit TINY bathroom, but the other two apartments bathrooms were not so great.  As Americans, we are very spoiled in our creature comforts.  I’m sure there are larger apartments (with large price tags) but I think the average living space is so small, (our 1-bedroom apartment is only 400 sq. ft.) it explains why everyone is sitting at an outside cafe drinking coffee and smoking even though it is only 30 degrees!  Have I mentioned the French love their cigarettes?!

In our neighborhood, we have the butcher, the baker, , the fish monger, the wine cellar, the cheese man, the vieggie & fruit stand and a cafe in every nook and cranny.   Our favorite boulangier for morning croissants and Abi’s “cafe” is about 4 blocks from the apartment, well-worth the extra steps.  In the evening our favorite boulangier for baguettes, is just a couple of blocks from the apartment. 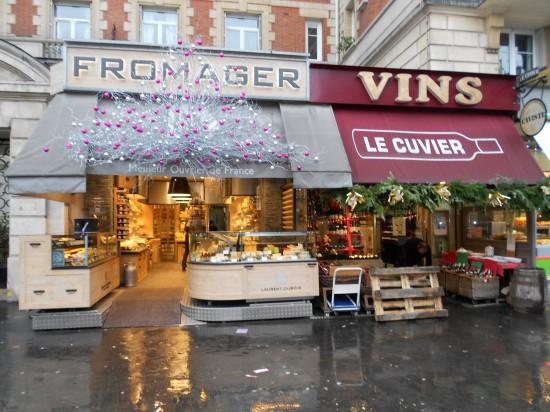 Cheese and wine… Where we shop. 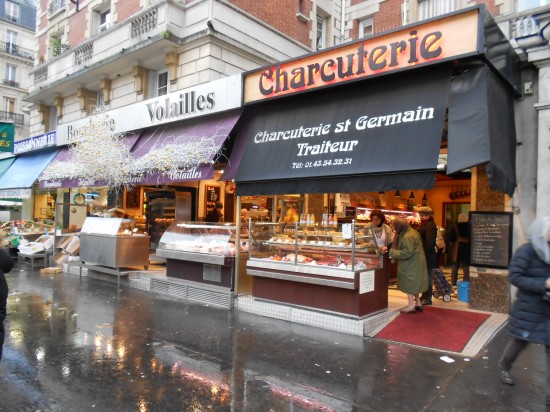 Charcuterie = prepared food, where we shop.

The city of Paris has a population of 2.2 million people and the city is alive with movement!  If you want to “stroll” along the sidewalk, better stay to one side or you will get run over as everyone moves quickly.  If you have a green light to cross the street, don’t assume the traffic will stop and if you’re in the crosswalk, it is legal for a car to miss you by only 3 feet.  And there are a lot of cars!  In the U.S. I have to admit I always laugh at the driver who can’t parallel park to save their life and yet the French driver can squeeze a car into a space you’d never think possible.  It’s easy, just bump the car in front of you and then back bump the car behind you!  The same thing can be said for finding space for housing.  Take a look at this photo: 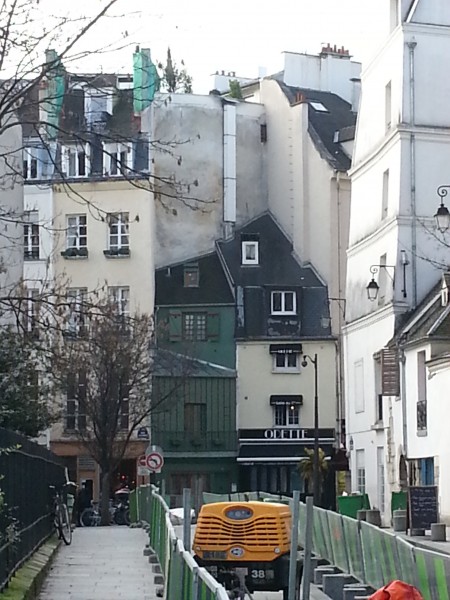 See the small green and white houses with the black roofs? They are built in to the space where two other buildings come together.

If this is “low” season for tourism, I would not want to be here in high season, or even in-between.  It is busy everywhere.  Yesterday, we went to the Palace of Versailles (post to come) and while we did not have to wait in line to enter, and you have the freedom to move through at your own pace, we could not imagine the volume of people who visit during high season because we were moving through cattle style. We were still able to see everything we wanted to see, sometimes we just held back until there was a lull in the crowd.  Oh, and the field trip kids!  Now that’s a field trip, The Palace of Versailles,  although like all good kids on a field trip many of them seemed bored out of their minds.

Parisian women do not wear tennis shoes.  I read it somewhere before we left home and so I’ve been checking and it’s true.  We purposely did not bring tennis shoes because we were told the scammers look at your shoes.  If I see a girl/woman wearing tennis shoes I listen for the language and sure enough it is not French.  French women wear a lot of black and the very stylish women wear fur, not politically correct on their part but I kind of think they really don’t care.  They are all about the fashion.

For the most part, we have found everyone to be quite pleasant and if you make even the worst attempt at speaking a word or two of French, they will respond and help.  Of course like anywhere, there are those who could care less if you need help, but hey, I find those every day in the U.S.  I think the stereotype of the French being rude isn’t altogether accurate, they just have someplace to be and they don’t see the need to make eye contact with everyone they pass on the street.

We have been to Notre Dame, the crypt under Notre Dame, St. Chapelle, the Cluny and Rodin museums, Napoleon’s Tomb, the Eiffel Tower, the river Seine, we have toured the city by bus, we have walked miles and miles through different neighborhoods and yesterday we visited the Palace of Versailles. I still can’t believe what we saw there!  I have so many stories to tell you but Abi is waiting for me to go as we are on our way to the Louvre this morning.  Au Revoir!