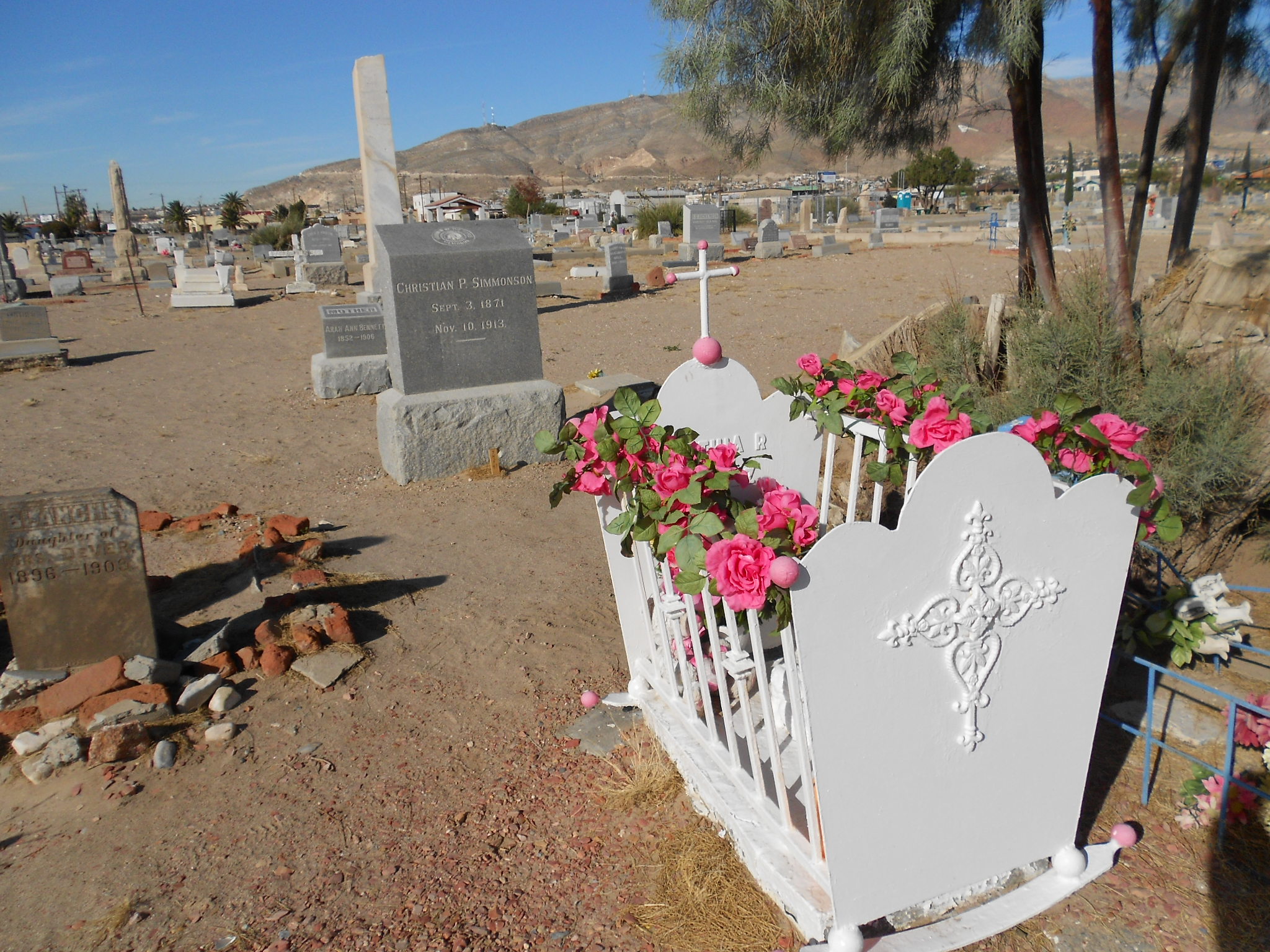 At this time next month we will be back in Washington, D.C. and I am filled with eager anticipation.  I cannot make the days go fast enough.

Throw Out the Outliers

But, in the meantime, I’m going to tell you a tale about a quirky little cemetery we found in El Paso, Texas.  Well, Abi found it.  On TripAdvisor, I believe.  If you find yourself somewhere and you don’t know where to go or what to see, check TripAdvisor.  Throw out the outlier reviews and go with the mainstream.  It helps! 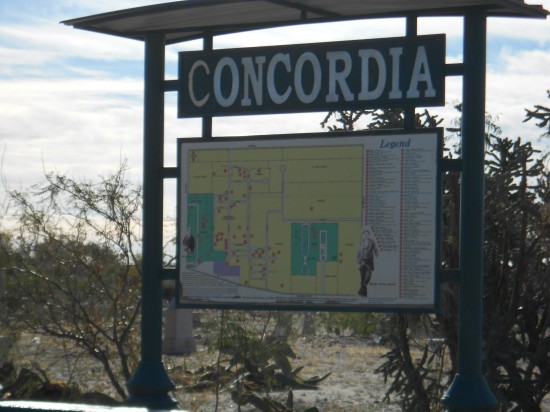 El Paso, One of the Safest

We left Las Cruces, NM heading east, passing through El Paso.  I have to say I didn’t see anything that would make me want to stop but research will tell you that even though it’s border neighbor, Juárez, Mexico is one of the most violent cities, El Paso is one of the safest cities, in the USA, in which to live, partly because just about every government agency is based in El Paso. Abi looks up these tidbits while we’re traveling – ya gotta love the internet. 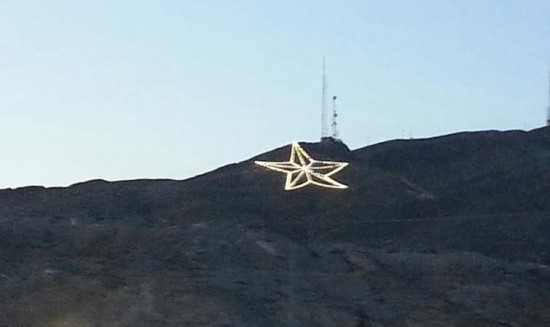 But I digress.  We pulled into the cemetery entrance on a very cold – bitterly cold – December day.  The size of it was overwhelming and although we found the brochure and map, we didn’t really know what we were looking for.  As luck would have it, we happened upon a security guard keeping warm in her car.  Her name was Maria and she could not have been more friendly or more willing to show us around the cemetery. 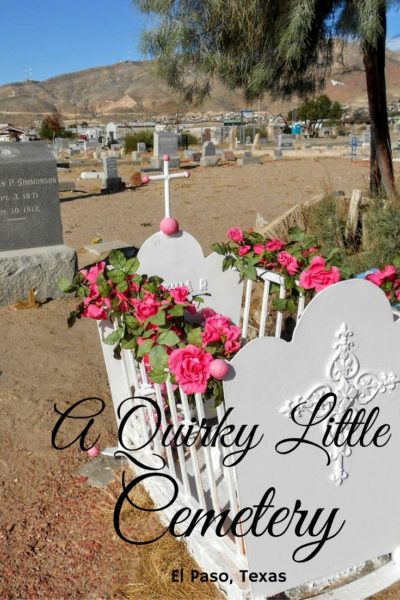 What I loved about Maria, was her genuine concern for the history and upkeep of the cemetery, and for life in El Paso.  She warned us – more than once – not to cross the border into Juárez.  Maria told us how vastly different Juárez is now, compared to past years.  She used to travel across the border once a week to do her grocery shopping, telling us that she could have a big breakfast for $3.00 and do her shopping for far less money than what it would cost her to shop in El Paso.

She beamed when she talked about those memories. Her children had been asking her to stop shopping in Juárez and she kept reassuring them she was safe until one day she was in her car and a truck pulled up alongside of her.  The next thing she knew someone shot repeatedly at the truck and killed the passengers.  She’s never been back.  Just listening to her we could feel the sense of loss she felt for that part of her life.  It’s funny how someone can come into your life like that, for such a brief moment in time, but I’ll remember Maria. 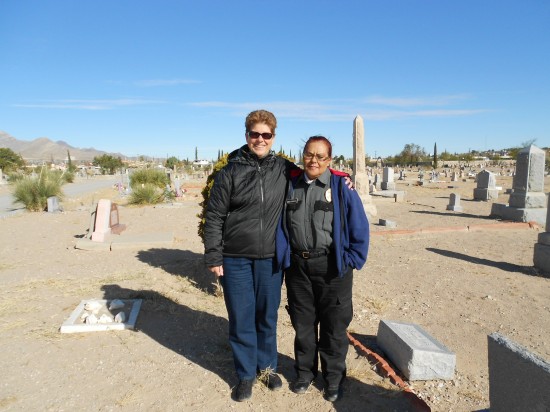 This isn’t the best photo, but she really was quite friendly.

Closing in on 200 years of history, the Concordia Cemetery – also known as El Paso’s Boot Hill – is a step back in time.  By the 1890’s sections of the cemetery grounds had been purchased by different groups and then designated as the Catholic, Masonic, Jewish, Black, Chinese, Military, Jesuit, Mormon, city or county cemetery, so one really does need a road map to navigate. Of course the saddest area was the children’s section of graves. 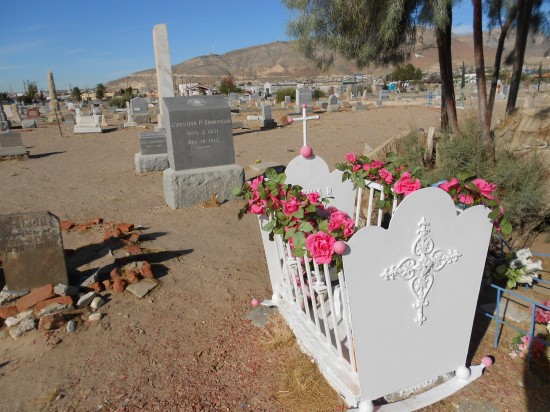 A child’s grave. Maria told us there are those who believe they have seen the cradle rocking. 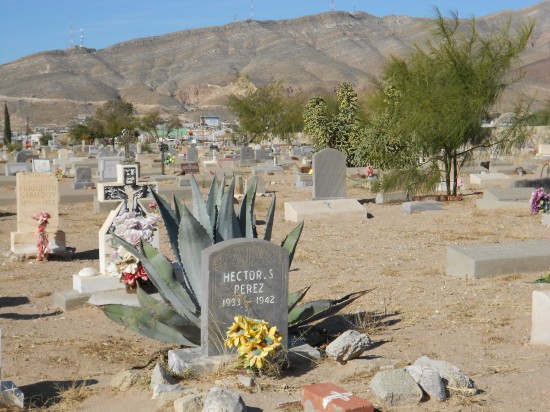 Maybe one of the most notable buried at Concordia is the infamous gunfighter John Wesley Hardin. 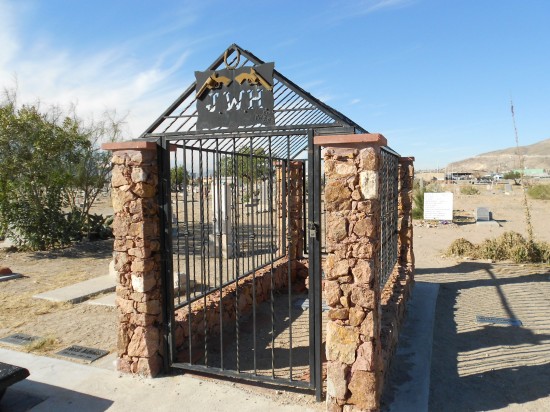 The grave of John Wesley Hardin. If I remember correctly, Maria told us the fence was built to keep the grave from being looted. 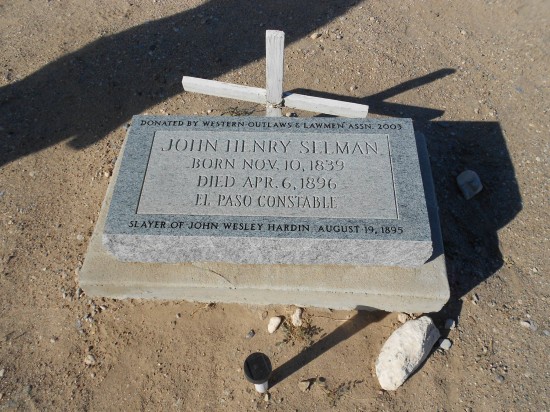 The grave of the man who shot John Wesley Hardin in 1895.  Kind of makes you wonder, doesn’t it?  Why the gunfighter has such recognition and the man who killed him has just a plaque, which was donated in 2003?

I’m not sure we’ll ever again – willingly – drive across western Texas because it is painfully long and desolate but I am grateful Abi found this little gem of a place in history.  And I’m even more grateful for meeting Maria and listening to her story. 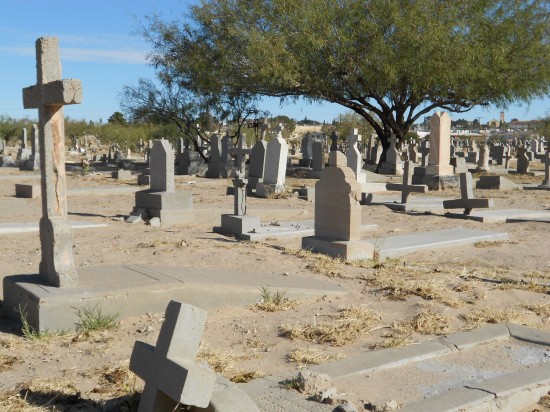 A thousand stories waiting to be told.

If you find yourself in El Paso, Texas, be sure to make your way to the Concordia Cemetery.  It’s definitely not a tourist destination, but it sure was interesting to take a walk through history and those who came before us.