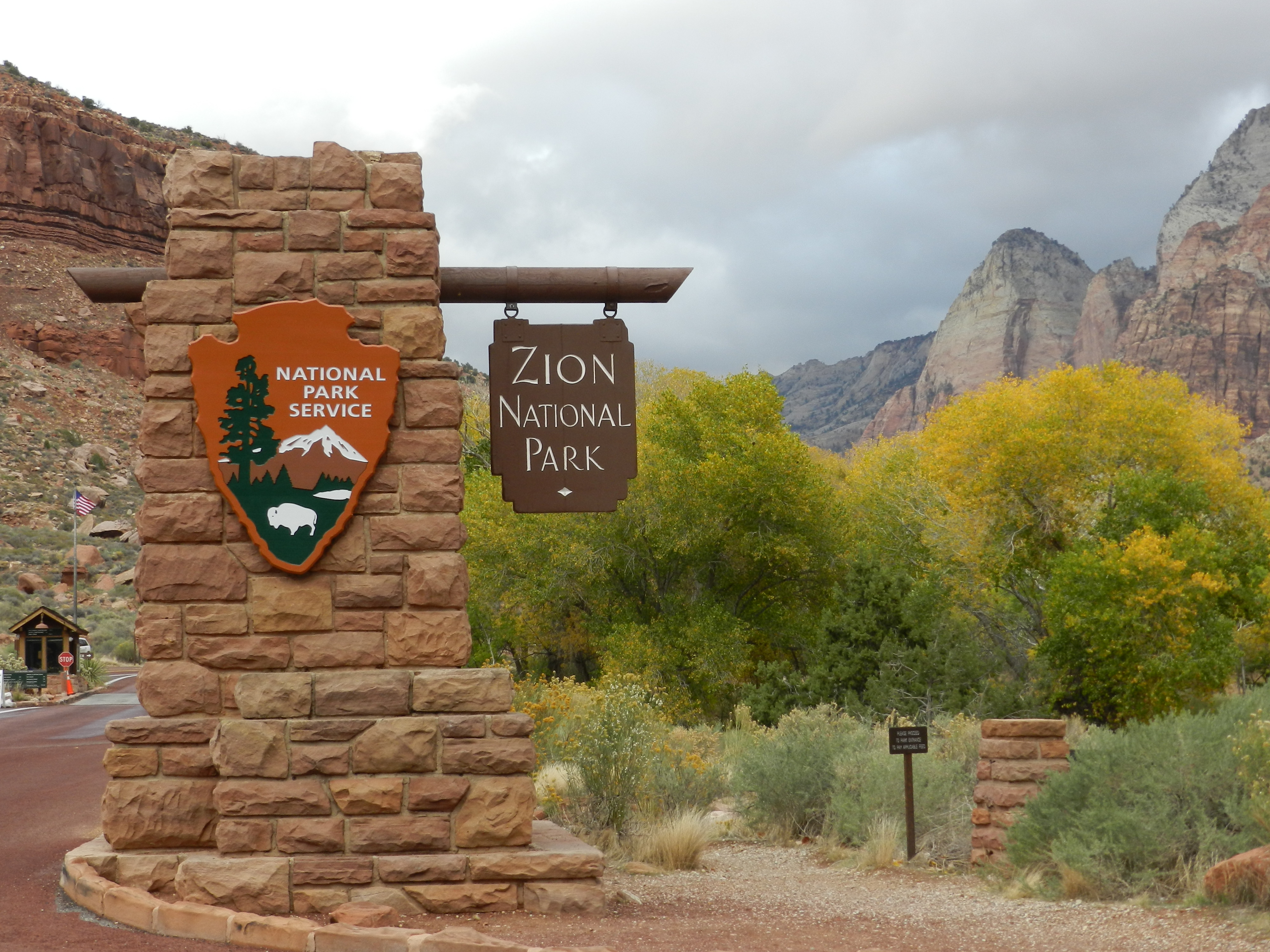 Rainy Days in Zion National Park. We awoke this morning to p-o-u-r-i-n-g rain so the only reasonable thing to do was roll over and go back to sleep, which we did.  It goes without saying that we got a late start to the day, but we’re here for seven days so we are in no hurry.

When Sunday Rolls Around

Actually, I have a strong suspicion we’ll be hanging out in our room all day tomorrow since the expected storm seems to be settling in for the next 24 hours.  It looks like once Sunday rolls around the temps will be cold but we’ll see the sun and that’s okay by me.  It’s one thing to explore when the air is cold, but it’s a somewhat miserable ballgame to explore/hike in the rain.  When we finally got around to getting in the car we happily discovered we are staying (Springdale, UT) just two miles outside of Zion National Park. 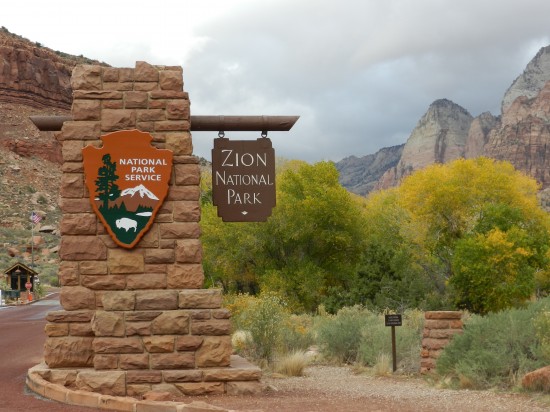 Welcome to Zion National Park. I have this “thing” for park entrance signs.

Since it is our hope to visit Zion National Park, Bryce Canyon National Park and the north rim of the Grand Canyon while we are here we bought an inter agency pass for $80.  Admission to each park is $25 so this pass was worth it since it’s good for one year with unlimited in/out.  Did you know that when you reach your 62nd year of life you can buy a lifetime pass for any and all national park for a mere $10?  And, it is good for up to three companions traveling with you.  Finally, a perk for growing older.  Update:  The senior pass is now $80.

Once inside the park boundaries we happened upon The Patriarchs Court, which has a short trail to a viewing point.  We discovered though, that if we crossed to the other side of the road there was a small trail leading to the river and beyond that the trail continued even further. With a distant waterfall in our sights, we headed up the trail. 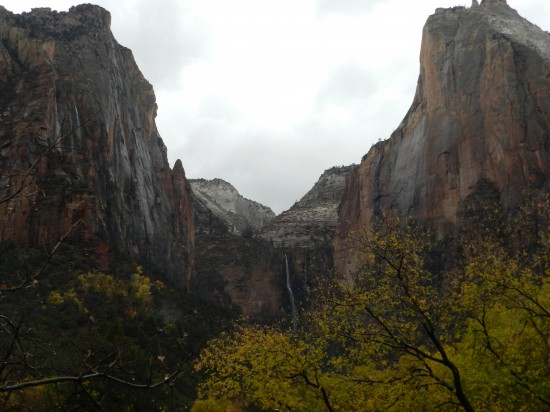 Heading for the waterfall!

Before we left home we had everything we needed sitting in the living room. But, we could not find our boots.  I mean, “could not” find them anywhere.  We searched our closet, our two storage rooms and the attic, to no avail. We looked in places that no self-respecting boots would dare tread.  They were not to be found.  Today, as we were hiking to the waterfall and my shoes were slipping in the wet clay soil, I kept thinking, “Where in the hell are our boots?” I just know when we walk in the door we’ll see them sitting somewhere completely obvious!  But, onward we trekked.

I should say that I have the best hiking buddy ever.  Abi takes my hand and pulls me up the steep switchbacks.  And, he let’s me hold on to his shoulders when we head downhill.  He does so not only because he loves me, but mostly because he knows if there is an opportunity for me to slip and fall, I’ll find it. 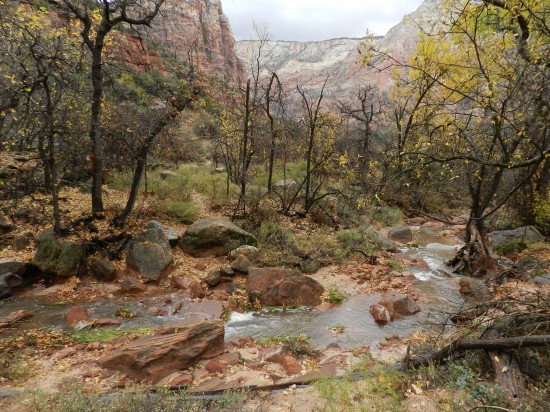 We had to cross this creek. 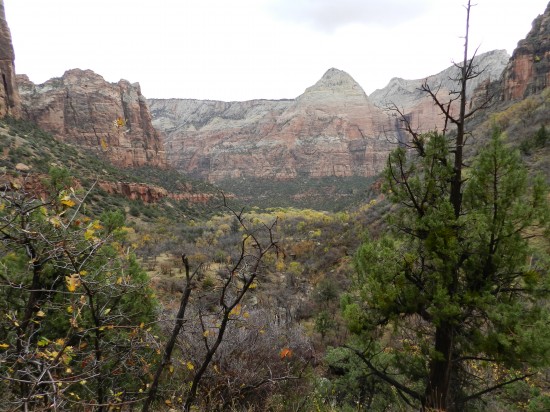 Looking back at to see how far we’d come. 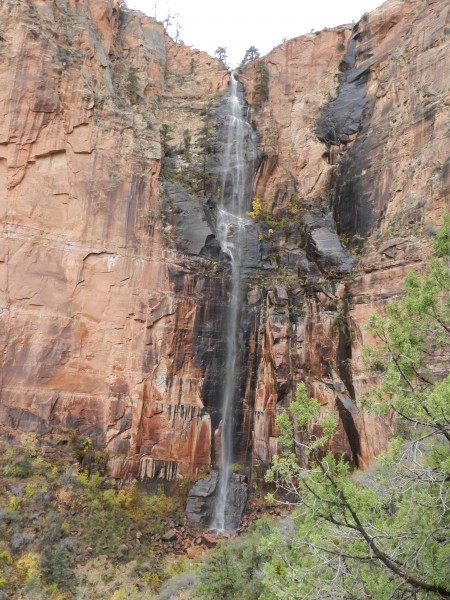 About as close as we could get! As we got near the base of the falls the switchbacks became tighter and steeper. I think to get right up to the base you’d have to hike up along the creek.

While we were hiking we were rained on and pelted with hail, but it was all worth it.  What was the most amazing thing though was that the landscapes around us kept changing.  When we started hiking toward the falls, the water was full and rushing down the face of the cliffs.  But after the rain had stopped for awhile, the water was all but gone!

After a pretty good downpour of hail, the top of the cliff was covered with a white layer which was so pretty.  Another 15 minutes down the trail, we turned around and every inch of white was gone. And, the water was flowing again.  It was a great first experience in this spectacular country. 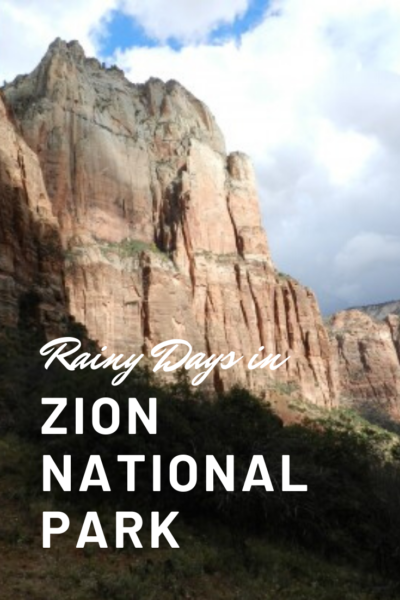 Hiking in the woods at the Shrine of Saint Anthony